Confronting a presidential hopeful — with an emotional story

Rocio Lopez's mother longed to see Julián Castro run alongside Hillary Clinton in the 2016 presidential election. At the Crosscut Festival, she intended to tell him as much. 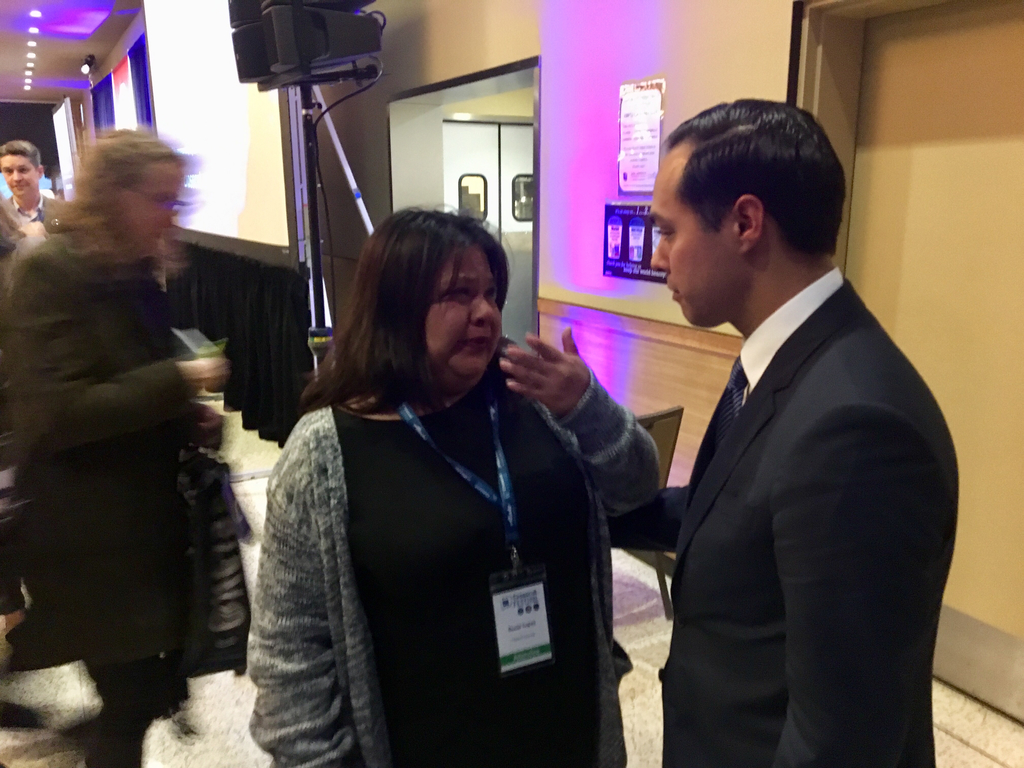 Rocio Lopez drove from Skagit Valley to the inaugural Crosscut Festival in Seattle to meet Julián Castro and tell him the story of her mother's death. (Kristen Clark for Crosscut)

Rocio Lopez drove down from Skagit County to be at the inaugural Crosscut Festival for only one reason: To meet rising Democratic star Julián Castro and to tell him that, before her mother, Jovita Angelica Guillen Hernandez, died in the summer of 2016, she desperately wanted Hillary Clinton to tap him as her vice presidential candidate.

After Castro addressed the festival on Feb. 3, Lopez leapt from her seat to corner him at the door before he could leave. She burst into sobs as she told him her story. He put his hand on her arm and hugged her when she finished.

“He was just saying, ‘God bless you,’ and ‘thank you for telling me this’ and that he’s going to try and make her proud,” Lopez said after the encounter. “And he wanted to know her name.”

Before Castro walked away, Lopez handed him a notecard on which she had written some of her mother’s words about him.

Lopez said her family had only three months’ warning before her mother’s sudden death.

“She stopped talking that last month, and before that, she had heard that Hillary might pick him as a VP and she said — I can’t say the exact words — but she said Hillary would be stupid if she didn’t pick him,” Lopez recalled, “and it would be historic for the Latino/Chicano community to have him, but she said, ‘I don’t know if I’m going to be around to see it.’”

“We had many conversations about politics” before her mother died, Lopez said. “And that was one that she had to talk to me about and let me know her thoughts about it, and we didn’t know what was going to happen. … I lost my mom sadly, but she made me promise to vote for him if he ran with Hillary.”

She added: “I’ve been crying about this for a week. When I found out he was coming, I started crying, and I was like, ‘I have to go,’ I said. ‘I cannot let him go without telling my story. I gotta tell him, I just gotta tell him what happened before my mom died.’”