Debating the future of 'Dreamers' stuck in limbo

With no fix yet in site, the Obama-era policy that shields young immigrants from deportation holds its tenuous ground. 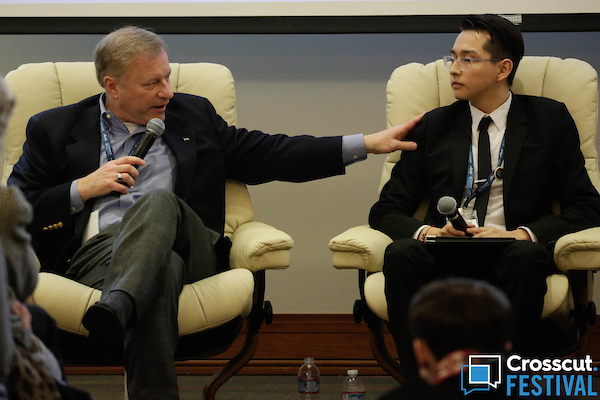 Talk show host John Carlson and Carlos Rodriguez during 'The Fate of the Dreamers' at Crosscut Festival 2018 in Seattle on Feb. 3, 2018. (Jason Redmond for Crosscut)

"So, have you sued anyone today?" That’s what Crosscut Staff Reporter Lilly Fowler asked Washington state Attorney General Bob Ferguson as she kicked off the “The Fate of Dreamers” panel at the inaugural Crosscut Festival.

Ferguson said that while he hadn't sued anyone that day, he had sued the Trump administration 20 times, and was waiting for a 21st lawsuit to be approved. One of those lawsuits dealt with the president's efforts to roll back the Obama-era immigration policy known as Deferred Action for Childhood Arrivals, or DACA.

The future of DACA is uncertain, and not everyone on the panel was in agreement about how to deal with the young people who fall under its protection, brought into the country as young children. But they all agreed that some action should be taken to protect DACA recipients, often called Dreamers, and that a bill should pass through Congress.

John Carlson, a conservative talk show host and former Republican candidate for governor, explained that President Obama created the DACA program via executive action, but argued that the decision should be made by the people’s representatives. Ferguson countered that many presidents have used executive action, including President Trump, who attempted to ban all travel to the U.S. from certain majority-Muslim nations.

Ferguson replied, “Yeah, it didn’t work out only because I filed a lawsuit against it.”

But what would an immigration compromise between Republicans and Democrats look like? Carlson suggested there would likely be other elements in any Dreamer bill, and that the spirit of bipartisanship seemed to be withering.

Ferguson said that 75 to 80 percent of Americans agreed on supporting Dreamers and maintaining protections. “What I find frustrating is that the president is using Dreamers as a bargaining chip,” he said.

Tensions rose when Carlson brought up that many of his radio listeners are legal immigrants who played by the rules and are angry that those who “cut the line” are still called “immigrants.”

The lone Dreamer on the panel, former Seattle University student body president Carlos Rodriguez, said, “Whether someone is undocumented or not, the racism is still there and I see friction between the good immigrant and bad immigrant narrative, which is even worse.”

Fowler asked about Carlson’s thoughts on undocumented immigrants who don’t want to go back to their country because of civil war. He drew groans when he said, “That’s another way of saying they prefer it here [rather] than where they’re from.”

Carlson said that he wants to see a DACA bill emerge from Congress so that individuals like Rodriguez can stay in America. For Rodriguez, time is running out: His authorization to stay here will expire on Oct. 28.

“I hope there is reform soon,” Rodriguez said. “For me, it’s OK and fine, but it’s terrifying because you don’t know what you’re going to do.”

Listen to the whole conversation using the Soundcloud link, above.