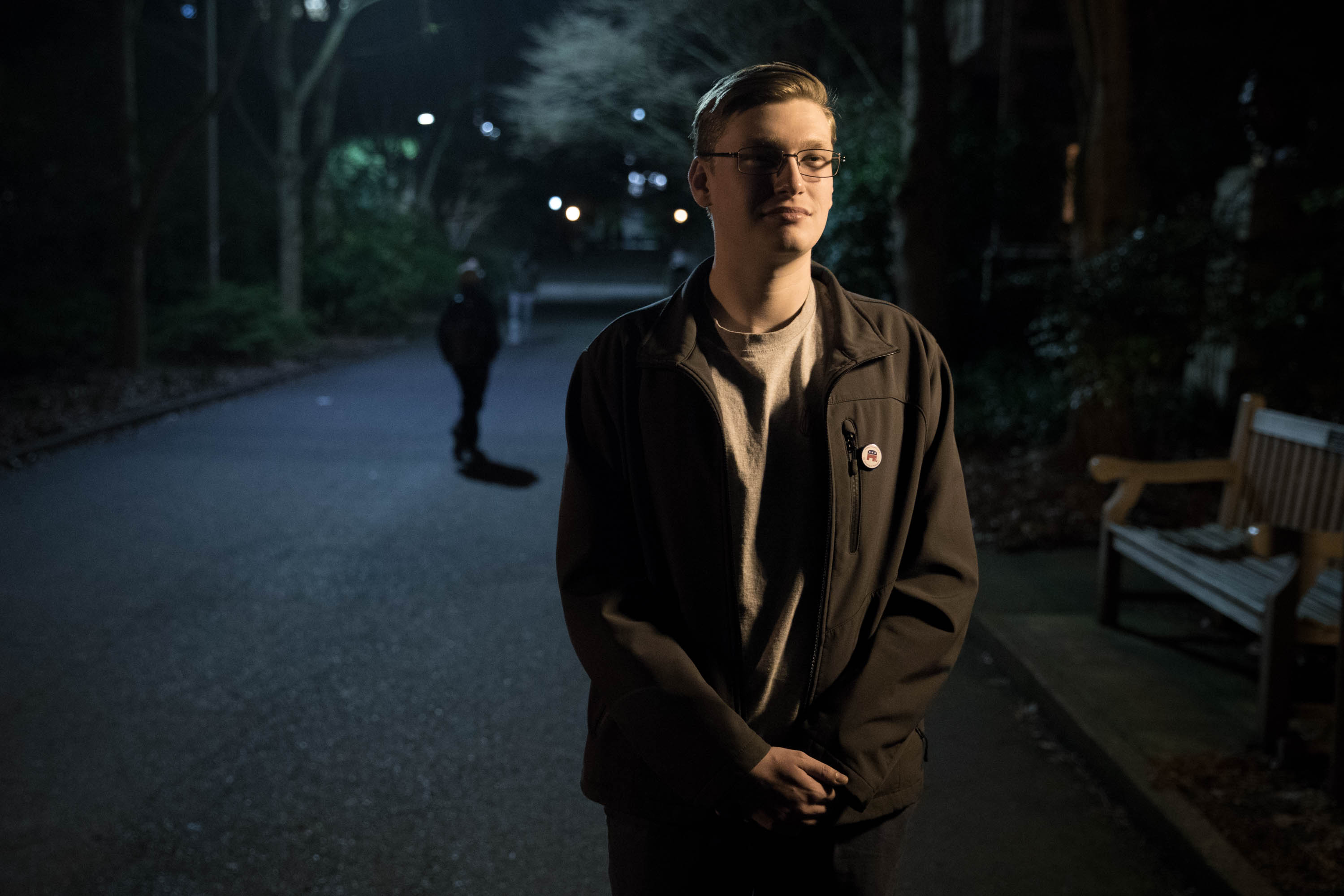 RELATED: "UW Republicans outnumbered by protesters at own rally"

One evening earlier this week, Chevy Swanson, bespectacled, clean-cut and president of the College Republicans at the University of Washington, stood in a classroom with about a dozen other students, mostly male, to decorate signs with various slogans.

“We died for liberty not socialism,” read one. “Taxation is theft, my money my choice.”

And echoing President Donald Trump’s recent State of the Union address: “Americans are Dreamers, too.”

Republican students on campus plan to carry the signs on Saturday when they welcome Joey Gibson, a Washington-based, Japanese-American activist whom some describe as a member of the “alt-lite” and who seems to court controversy and violence wherever he goes.

On Tuesday, Swanson and the Republican group he leads sued the University of Washington for imposing a $17,000 security fee intended to ensure the Gibson rally on campus doesn’t devolve into another melee. The lawsuit describes the fee as “draconian and unreasonable.” It also accuses the school of “chilling, marginalizing, or banning the expression of conservative viewpoints on the UW Seattle campus.” And it characterizes Gibson and his organization, Patriot Prayer, as an “informal group of evangelical Christians,” though in an interview with Crosscut last year, Gibson referred to himself as more of a “spiritual but not religious” type of guy.

On Friday, a federal judge in the U.S. District Court for the Western District of Washington granted Swanson and the College Republicans a temporary restraining order, which will allow the club to move forward with its planned rally while temporarily prohibiting the school from imposing the $17,000 fee. Judge Marsha J. Pechman concluded that "allowing the UW to enforce its Security Fee Policy would infringe not only the rights of the College Republicans, but also the rights of others — including supporters and protesters — who wish to attend the Freedom Rally." The lawsuit itself is still pending.

Fearing an outbreak of violence, University of Washington President Ana Mari Cauce asked that students stay away from the rally in the Red Square area of campus in front of Kane Hall, noting that "there are organizations outside our university who seek to use public university campuses and our commitment to public discourse as a vehicle and opportunity to provoke and incite others."

In a statement, University of Washington spokesman Victor Balta said school officials plan to comply with the judge's order but that they will "continue to advocate for charging reasonable security fees to campus groups based on objective criteria," such as attendees of previous events and the proposed time and location of the rally.

"We anticipate more than $50,000 will be spent toward security Saturday, and the $17,000 fee represents a portion of what is necessary for police to safely accommodate guest speakers, the host group and other attendees," Balta said.

"Civil, rigorous and passionate debate on myriad issues are the hallmark of a major public university, and the UW works hard to maintain an environment where ideas can be shared and challenged," Balta continued. "The safety of our campus community is of utmost importance and security at Saturday’s event will be provided as planned by both UWPD and Seattle police."

Officials have reason to worry. Last year on campus, initially peaceful protests escalated into violence that included someone being shot, after protesters attempted to block people from entering a speech by Milo Yiannopoulos, a controversial figure and a former senior editor for Breitbart News.

The University of Washington stands as an example of the types of free-speech battles that have increasingly cropped up on college campuses throughout the country.

The lawyer representing Swanson and the UW College Republicans, William Becker, runs a firm called Freedom X, which dedicates itself to defending students and others when, as Becker put it, “some state actor decides they’re going to discriminate against a conservative just because that seems to be de rigueur.”

Last year for example, Becker appealed the suspension of an Orange Coast College student who had secretly videotaped his professor’s classroom comments calling the election of President Trump “an act of terrorism.” In the end, the student was allowed to continue to take classes without interruption. The firm also combats what it refers to on its website as “creeping Sharia,” or the "growing acceptance of Islamic law.” After a 2014 lawsuit, according to the website, a Tennessee school that had attempted to prevent the anti-Islamic group known as ACT for America from using school facilities was forced to institute a new policy, prohibiting school officials from determining which subjects can be discussed on school grounds.

While referring to so-called anti-fascists like Antifa and others who protest groups like Patriot Prayer and ACT for America as “pampered, self-centered activists,” Becker argues that in the name of upholding free speech, police should not just monitor events but ensure individuals are safe. “They’re like fireman who are afraid of putting out a fire,” Becker said.

Harmeet Dhillon, a San Francisco based attorney who in 2016 led the Republican National Convention invocation with a Sikh prayer, is currently litigating a similar case involving what she refers to as “unconstitutional restrictions,” including excessive security fees, imposed by the University of Berkeley after a planned series of high-profile conservative speakers, such as Ann Coulter and David Horowitz, were abruptly cancelled. The U.S. Department of Justice recently filed a statement of interest in the case, arguing the school was violating the First Amendment.

Since the election of Trump, Dhillon argues, “universities have been whipping up this hysteria. These lawsuits are a blow for free speech for all students.”

Ari Z. Cohn, director of the Individual Rights Defense Program at the Foundation for Individual Rights in Education, says he’s seen a dramatic uptick in students who are reaching out to the organization for help. In 2017, for example, the foundation received more than 900 requests for assistance, but Cohn warned that “it’s difficult to pinpoint whether free-speech cases are happening more, or if people are more aware.”

Cohn said the foundation has fought security fees imposed by schools for years.

“This is certainly nothing new, it’s just the scale is different,” Cohn said referring to the $17,000 fee at the University of Washington.

“If they simply try to pass those costs on they’re going to be depriving their students,” Cohn said. “Pretty soon nobody is going to be able to say anything because it’s going to be too expensive.”

Cohn said it's difficult to point to any trends in court rulings because they vary depending on the details and where the case is heard but that the U.S. Supreme Court has held that the First Amendment applies to colleges and universities. And in 1992, the U.S. Supreme Court, in a case known as Forsyth County, Georgia v. The Nationalist Movement, limited the ability of local governments to charge fees for the use of public places.

Swanson, for his part, said the UW College Republicans intend to continue to stand for Republican ideals such as limited government and a "strong emphasis on our rights through the Constitution." He also said he trusts “the police to do their job” and keep students safe this weekend.

When asked whether he thinks the conservative club is treated differently than other organizations on campus, Swanson said: “I wouldn’t say we’re respected on campus. I don’t think that’s ever going to happen for any right-wing club on any liberal campus.”

But heading into Saturday's rally he wants one thing to be clear.

“We don’t respect anyone who comes in with bad intentions," Swanson said. "We do want to employ a love over hate ideology.”