'Gotcha' journalism and Watergate — with a female twist 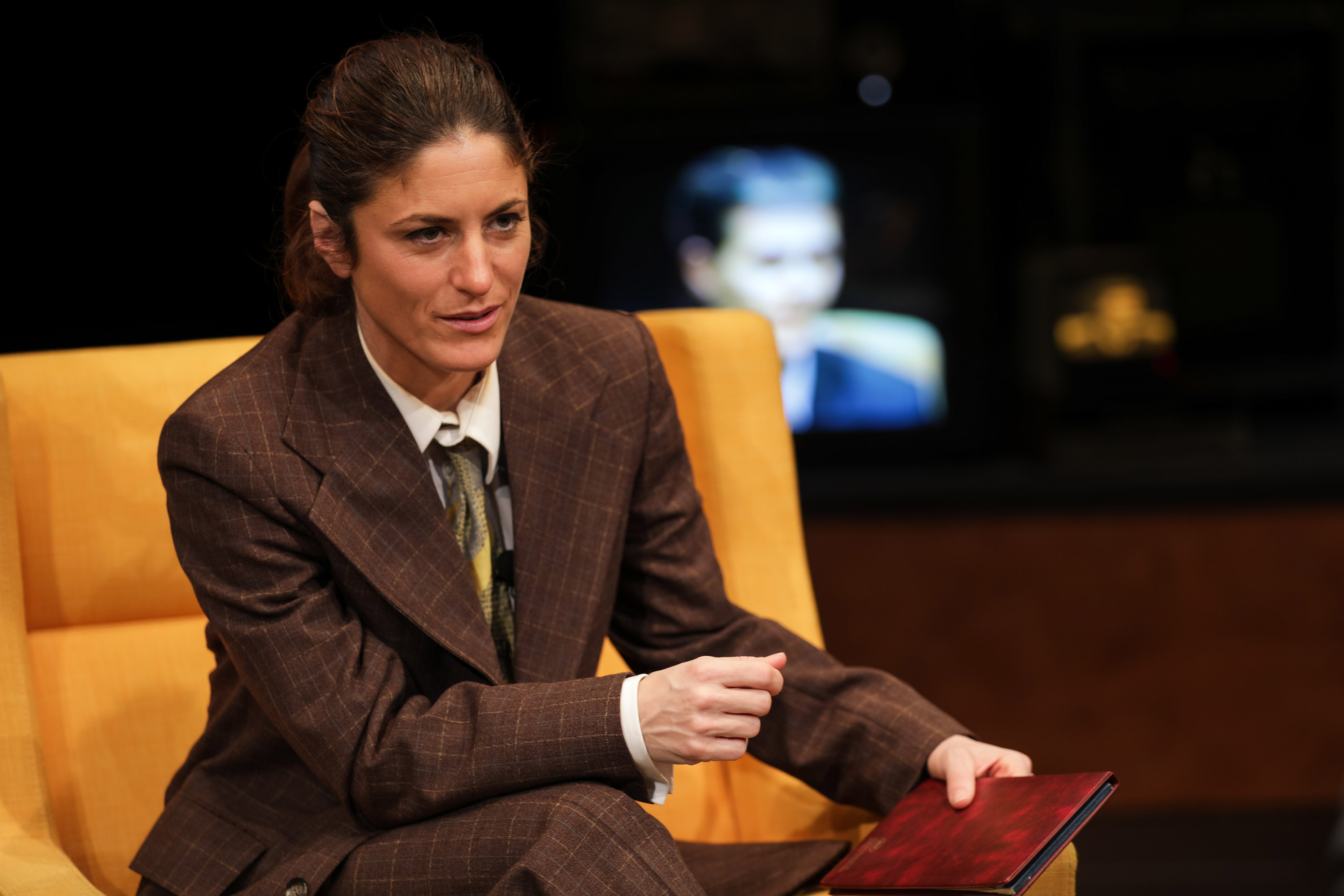 I will be honest with you.

When I first heard that Strawberry Theatre Workshop was presenting a production of the play “Frost/Nixon” with an entirely female cast, I was dubious.

Non-traditional casting is, by now, commonplace in Seattle theater. Sound Theatre Company is readying a production of “You Can’t Take It With You” that transforms the largely White (as conceived by the playwrights) extended family of Depression-era eccentrics into a multi-racial clan.

And earlier this year, Rebel Kat Productions conjured an all-female milieu for its unconventional mounting of William Shakespeare’s “Coriolanus.”

But neither of these plays, set far before our own time, deal openly with political scandal or with prominent men involved in one of the most media-hyped events of the 1970s: the internationally televised interviews between British talk show host David Frost and disgraced former U.S. President Richard Nixon.

What would female actors, even two excellent ones, add to these stage portraits of leading figures engaged in a duel of words? Other than giving some fine actresses more work, why would this casting be preferable or equal to casting two men who could physically resemble the characters, as did Michael Sheen as Frost and Frank Langella as Nixon in the well-received film version of Peter Morgan’s play? Is cross-gender casting the right approach in every instance? Can it be a distracting gimmick rather than an enhancement?

Based on positive reviews for the production and a conversation with its director Greg Carter, I decided to see “Frost/Nixon” in its 12th Avenue Theatre run (which continues through Feb. 17).

And I’m glad I did because I found the show illuminating in a number of ways.

First of all, it reminded me that good acting is not impersonation. It is, in essence, embodying a character’s spirit fully from the inside and allowing us to see the world from his/her individual perch. And it is like peeling the skin back to examine the nerve endings, the pulse, the sinews of someone.

In this sense, both Amy Thone as Nixon and Alexandra Tavares as Frost succeed. Neither resembles the man they are playing. Nor do they really sound like them — not quite adopting Frost’s somewhat affected posh-English accent or Nixon’s deep-baritone, flatly American and distinctively deliberate manner of speaking.

But all that matters less than you’d think as Thone captures in her bearing and in her own enunciation Nixon’s stony resolve, wily wariness toward and implacable combativeness. Tavares, whose voice pitches higher, also conveys what makes Frost tick: his good nature and easy charm (with men and women), his gambling instinct (he bore much of the cost for the risky project) and his shrewd talent for listening and hearing what his interview subjects are really saying.

The characters come across as male, but gender isn’t in the forefront here. And it’s not the only aspect of someone’s being.

The piece also reminded me that the Frost-Nixon dialogue helped to usher in a new hybrid of celebrity-political television “gotcha” journalism. The play unfolds in short “takes,” including many snippets of the televised conversations. It was extremely unusual then to imagine someone like Nixon, who had stayed virtually in exile since resigning from the presidency in 1974 after the Watergate scandal, being cross-examined by a TV personality who was not considered to be a “serious” newsman. (The implication in the play is that the fees paid to Nixon had a lot to do with his participation. He needed the money.)

Actually, in this country, Frost wasn’t considered a newsman at all, but a chatter-upper of movie stars and sports figures. (British audiences knew him also as a sharp political satirist and interviewer of powerful VIPs like publisher Rupert Murdoch.)

Today it’s commonplace for major political figures, particularly presidential candidates, to make the rounds of talk shows. And it’s not unheard of for controversial guests to be paid handsomely for more serious interviews. The line between entertainment and information has been all but obliterated by the preponderance of “infotainment” — often in the service of eliciting a shocking remark or unexpected admission that in itself makes news. “Frost/Nixon” was an early and very successful iteration of that.

Finally what struck me was the actual admission Nixon does make at the climax of the play. After many hours of stem-winding reminiscences and statesman-like orations on his presidential policies, Nixon is finally cornered by Frost into an acknowledgment that he put “the American people through two years of needless agony” during the scandal over the Watergate break-in and cover-up by him and his associates.

When Nixon says, “I let the American people down and I have to carry that burden with me for the rest of my life,” there was a brief but searing moment of keen tragedy and national catharsis.

But it was a catharsis that today seems impossible with an American leader who never apologizes, never admits he’s lied or is wrong even with provable evidence at hand. It’s no wonder that our current president was a television star whose distrust of the news media equals Nixon’s. And it says something about where we’ve arrived, that his mastery of mass media and stonewalling is far superior.