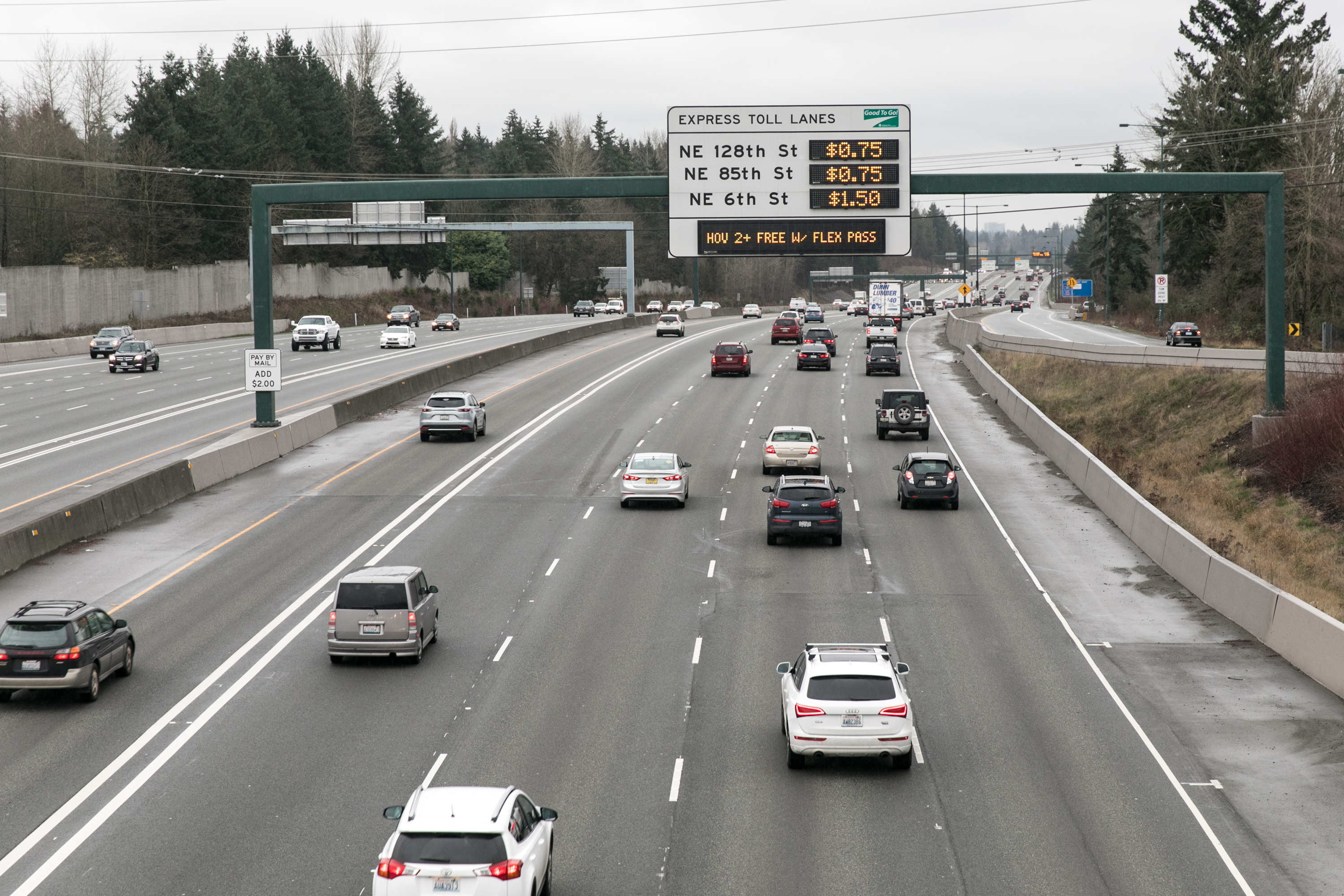 The opening of express toll lanes on Interstate 405 in 2015 offered Eastside residents a path out of mounting traffic congestion: Gamble by paying the fluctuating toll and shaving about 13 minutes off the 15-mile drive between Bellevue and Lynnwood, or continue suffering through bumper-to-bumper traffic on one of the most congested corridors in the state.

Public support has more than doubled since the lanes began operating two years ago, according to surveys conducted by the Washington State Department of Transportation (WSDOT). But even as commute times improve for most, the toll lanes are failing to meet speed benchmarks set by the Legislature that require cars in the toll lanes maintain an average speed of 45 mph or faster, 90 percent of the time during peak periods. To meet the obligatory rates of speed, one recommendation is to raise the top rate above the current maximum of $10.

“It’s an obscene amount of money,” said Jason Ritchie, a Sammamish City Council member. “It seems to cross an economic boundary for a lot of people.”

Campaigning for his council seat last year, Ritchie was surprised just how contentious of an issue the express toll lane was to residents.

“I didn’t realize how much of an impact they have on people every day,” Ritchie said, who frequently takes I-405 for his day job as owner of a business that modifies homes for accessibility in line with the Americans with Disabilities Act, but he says he doesn’t often use the toll lanes.

During commute times, the dynamic toll lanes - which run both north and south between Bellevue and Lynnwood - are free for buses, vanpools and carpools with three or more occupants. Everyone else must pay the toll, which fluctuates depending on real-time traffic conditions. As traffic increases and more vehicles enter the lanes, the toll rate rises. Currently, the toll rate ranges from a minimum of 75 cents to the current cap of $10.

WSDOT says the express toll lanes are working, offering users an option for a faster, more reliable trip. Even speeds in some of the general purpose lanes are improving, saving drivers up to seven minutes all while generating a revenue stream for future improvements along the corridor, the department says.

While the I-405 express toll lanes aren’t perfect, Mark Hallenbeck, director of the Washington State Transportation Center, said the concept is sound. He said toll funding - which is required to be reinvested in the area it was collected - creates a revenue stream to improve the corridor. And the lanes offer residents choices.

“Individuals have the option of paying for a better level of service when they choose,”  Hallenbeck said. “Choice is a really good thing, particularly when you are choosing between mediocre alternatives, because at least you pick the best alternative for you.”

Dynamic tolling is just one example of pricing congestion, a tool many U.S. cities are using to reduce traffic. New York City is debating legislation that would institute an $11 toll to drivers entering the busiest parts of the city. The central Puget Sound region launched its pricing experiment in 2015 at a time when Washington lawmakers were looking for ways to fund road projects other than relying on the gas tax.

Since opening, WSDOT says during peak periods commuters on average are able to drive 19 to 23 mph faster than those in the general purpose lanes through the entire corridor from Lynnwood to Bellevue, saving drivers up to 13 minutes. Even cars stuck in the general purpose lanes are moving faster through the segment of the corridor where two toll lanes exist - from Bothell to Bellevue - saving as much as seven minutes, according to WSDOT.

But not all sections of the toll lanes are moving cars fast enough to meet the speed performance goals set by lawmakers. The requirement took effect two years after the lanes started operating.

Construction for the project added two dynamic tolling lanes on I-405 between Bellevue and Bothell’s southern border, but only a single dynamic tolling lane from Bothell north to Lynnwood. North of State Road 522, where the freeway was not widened, I-405 narrows from five lanes to three — shedding a toll lane and a general purpose lane — creating a bottleneck in the system and slowing down the toll lanes.

“Having a bottleneck is an unavoidable problem,” said Reema Griffith, executive director of the Washington State Transportation Commission, the agency charged with setting toll rates. “It impacts how these lanes are performing.”

In April, after a peak-use shoulder lane was opened in the northbound single-lane toll section, the toll lanes began meeting speed benchmarks. But in the southbound direction - where there is no such shoulder use allowed - cars move 45 mph only 63 percent of the time, failing to meet the speed requirements.

And in the general purpose lanes where only a single toll lane exists, travel times have increased.

To improve speeds so all toll lanes meet the speed requirements — a report by an out-of-state consultant requested by state lawmakers — recommends allowing the max toll to rise above the current limit of $10.

“Raising the limit is just ridiculous; people are already paying 10 bucks,” said Rep. Mark Harmsworth, R-Mill Creek. “And for the folks that can’t pay, they are sitting in worse traffic.”

Harmsworth is the primary sponsor of a bill to eliminate the toll lanes altogether — converting one to a high-occupancy vehicle lane and the other, where two toll lanes exist, into a general purpose lane. Despite bipartisan support, Harmsworth predicted the House bill wouldn’t get to the floor for a vote. A similar bill in the Senate, which has former Sen. Dino Rossi, R-Sammamish, as the prime sponsor, also has support from both Republicans and Democrats. Both bills so far have failed to make it out of committee and are unlikely to be voted on in the Senate or House this year.

Harmsworth wants to see the lanes turned off. He said lawmakers made it clear when they authorized the toll lanes that if the lanes failed to move cars fast enough, they would need to be terminated.

WSDOT argues the lanes are meeting the goals the agency set “to provide a choice for drivers, provide a faster and more predictable trip and fund future improvements.”

Griffith said raising the max toll rate is an action of last resort. Instead, she supports having two express toll lanes the entire way between Lynnwood and Bellevue — another suggestion from the report. 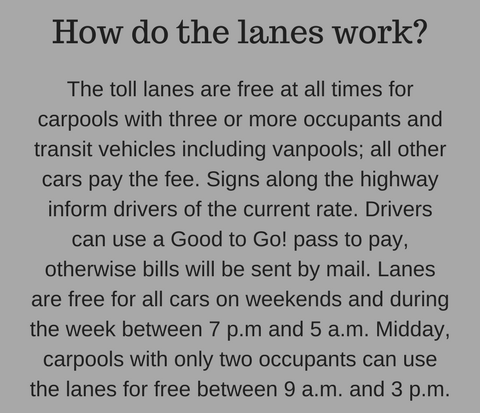 Since the opening of the lanes, public support has grown, according to surveys conducted by WSDOT. In 2016, a few months after the lanes opened, support for the lanes hovered around 23 percent, and by 2017, support had grown to 60 percent. But the 2017 survey also found a third of respondents believed traffic along I-405 had worsened after the installation of the toll lanes.

“We are trying to give all drivers a choice,” Griffith said. “We can’t control the growth, but what we can do is offer an option to get out of traffic.”

Critics say pricing lanes imposes an unfair burden on lower-income drivers — taking the valuable commodity of time from one person and selling it to another.

Analyzing trip data from Good To Go!, the state's electronic toll collection system, WSDOT found less than 7 percent of vehicles use the lanes every day. With over 70 percent of drivers using the lanes five or fewer times during the month, many commuters use the lanes just when needed, the agency says.

“Data is showing these are not ‘Lexus lanes,’” Griffith said. “They’re not lanes for the rich — all sorts of people are using them for all sorts of reasons.”

The toll lanes have also benefited transit riders, improving reliability and decreasing travel times along I-405 bus routes by as much as 29 percent. King County Metro Transit says riders are saving up to 10 minutes compared to travel times in 2015.

To support Sound Transit’s future bus rapid transit project, WSDOT has plans to extend the express toll lanes along I-405 to Renton. Construction on the interstate is scheduled to begin in 2019.

Griffith said there were no immediate plans to make changes to the existing toll lanes.

Hallenbeck, the director of the Washington State Transportation Center, said given the financial and geographic reality of the situation, the express toll lanes are the best option.

“Because so many people want to use I-405 during the three-hour morning commute and the four-hour evening commute, its value goes up. That’s economics,” Hallenbeck said. “So the [express toll] lanes actually understand those economic goods, and they are giving you an option to pay for a better good.”