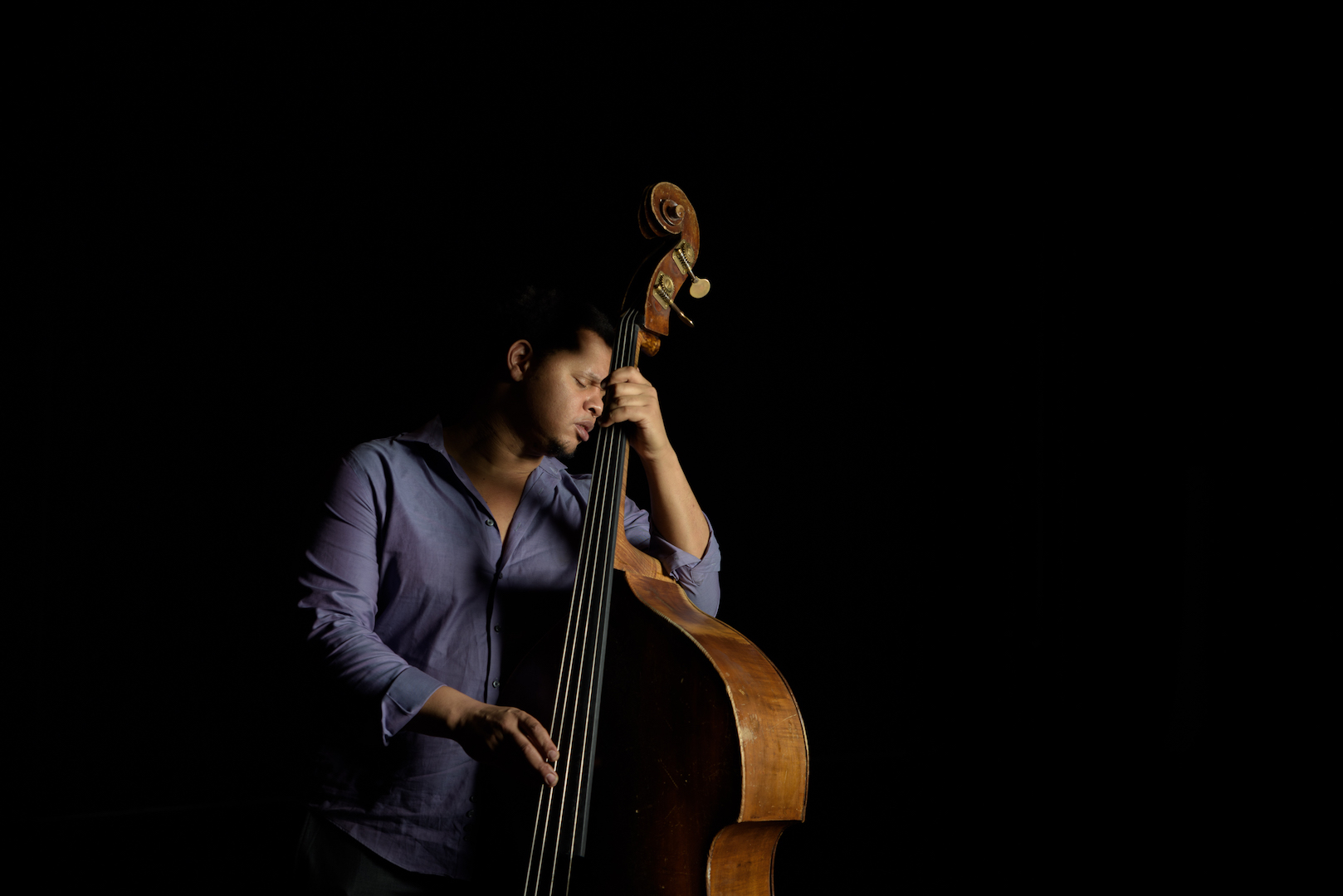 Seattle bassist Evan Flory-Barnes premieres his musical memoir "On Loving the Muse and Family" at On the Boards March 1. (Photo by Ripple Fang)

When Evan Flory-Barnes plays double bass, his upper body is in constant motion — his hands pluck and skitter across the strings, his shoulders dip and weave, his head swerves skyward and side to side, his brow knits and relaxes, his mouth springs open in a blissed-out smile. But at a rehearsal for his new show, "On Loving the Muse and Family," he stands as still as a heron on the hunt.

Listening to his orchestra play a section of the new composition, Flory-Barnes is immobile — wholly focused on searching the surface of the music for the slightest aural ripple. When he hears it, he seizes: “Flutes, do you have an A-flat there? Let’s change that to an A-natural.”

The 39-year-old Seattle native has been listening carefully for decades. He played in the Garfield High School orchestra and studied bass performance and jazz at the University of Washington. Fluent in a variety of musical styles, he sits in with many local ensembles but is best known for his jazz-rock-and-sometimes-Bjork quartet Industrial Revelation, which won a Stranger Genius Award in 2014. In most bands, he takes the traditional bass position, standing to the side of the drums. But with "On Loving" (at On the Boards, March 1–4) he’s putting himself front and center.

Inspired by friend and bandmate Ahamefule J. Oluo’s autobiographical concert "Now I’m Fine" (which ran at On the Boards in 2014), Flory-Barnes began to think about what his own musical memoir would look like. He knew right away he wanted it to have the vibe of a swingin’ 1960s variety show. “I love that era,” Flory-Barnes says. “I love the way people talked, the style. I got deeply into Dean Martin early in college after watching [the 1996 Vince Vaughn movie] 'Swingers.' I bought his albums and attempted to imitate that style.”

In the first half of the performance, Flory-Barnes plays show host Nathaniel Dean Watts, a loose amalgamation of Martin, Nat King Cole and 1960s spiritual philosopher Alan Watts — all muses of a sort. “It’s an homage to the whole vibe of that era. But interjecting psycho-spiritual concepts — that’s the twist,” he says.

In rehearsal, Flory-Barnes sings his own orchestral jazz ballads, nailing Cole’s buoyant round vowels (turning “and” into AHnd and puffing “was” into wAHz) and chummy-yet-knowledgeable host banter. Other songs perfectly capture the sweet tones of doo-wop and soul groups, thanks to a trio of male backup singers, Okanomodé Soulchilde, Darrius Willrich and Michael Darby.

Though the sound may be a throwback, the words, which center on matters of the heart, are thoroughly modern. Singers like Martin, Cole and The Temptations crooned about love and relationships but they never explicitly addressed the role of “love hormone” oxytocin. Nor did they use phrases like “toxic bullshit,” “do your soul work” and “projecting.” Flory-Barnes’ contemporary lyrics give the old-time music a freshness that’s surprising, funny and catchy. It feels like a brand new entry in Seattle’s long history of jazz.

Ten days before opening night, Flory-Barnes is finalizing parts for his orchestra: some 40 musicians and friends he’s worked with on various projects. He moves all over the stage, checking in to make sure the parts he’s written actually feel right. “I’m leaving room for improvisation,” he says, noting that even though this is his project, falling into a “hyper-controlling, egomaniacal space” won’t work. “Everyone brings their gifts to the table. And the horn section comes up with better stuff than I would.”

Like any great jazz musician, he’s comfortable with spontaneous creation. “Wait, I have an idea,” he says after the band plays hesitantly through a section. “Let’s move measure four to the intro.” It works beautifully. On another song he stops, saying, “It doesn’t feel right to wait that long for the vocals. Just cut those two measures.” As the players edit their sheet music, the room is peppered with the clinking of pencils hitting metal music stands.

Rachel Cook, artistic director of On the Boards (which commissioned "On Loving"), notes that Flory-Barnes’ process is rooted in intuition. “My favorite moments from watching him [in rehearsal] were when I felt you could see the musical notes as sculptural material in his head that he was trying to massage into place.”

His improvisational skills also come into play in the second half of the show, which Flory-Barnes says switches from variety show to concert. “But like a Leonard Bernstein Young People’s Concert where I’ll talk about how musical materials translate into emotion.”

In the 1960s, when the legendary composer/conductor broadcast his family concerts from Lincoln Center, Bernstein would pose questions to kids such as, “what does music mean?” and “what is a melody?” and illustrate his answer with orchestral excerpts. Flory-Barnes plans to do something similar, with his own questions and excerpts by way of stories about significant relationships — romantic, familial, mentoring — that inspired him to write music. In other words, the intimate variety of muse.

The music in this last half is cinematic and sweeping — and occasionally “dirgey,” as he deems one number during rehearsal. The narrative has no formal script, but Flory-Barnes says he has “jump off” points to guide him. “It’s about the path of my soul, my self and my musical growth intertwined.” A storyline he knows by heart.