As the oceans change, can oysters adapt? 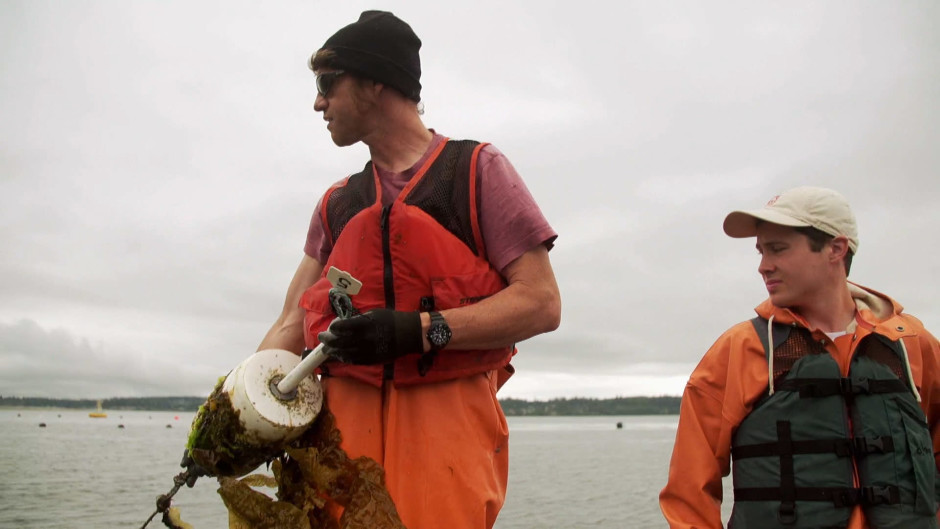 Brian Allen is up to his elbows in cold, black water. He’s hanging over the side of a small boat, trying to pull in a tangle of ropes.

They’re heavy and being dragged sideways by the current. He strains against them.

Allen is a researcher with the Puget Sound Restoration Fund. He’s working within a 2.5 acre plot of open water near the mouth of Hood Canal, west of Seattle.  The area is roped off on two ends, and inside dozens of buoys bob in the low chop.

Below the surface, there are 60-foot grow lines covered in yellow sugar kelp.

Allen untangles a line and hooks it onto a manual winch at the back of the boat. He starts cranking the kelp to the surface.

“Here’s good looking plant,” he says, grabbing one of the 6 foot blades of kelp. “I use the term plant loosely, they are not plants. They’re protists related to slime molds and amoebas.”

But like trees, bushes and other plants, kelp makes energy through photosynthesis: carbon dioxide in, oxygen out.

And this exchange of gasses is what scientists are trying to understand and harness in an effort to adapt to a major and troubling shift in ocean chemistry happening around the world.

The world’s oceans are giant carbon sponges. They suck up about a quarter of the carbon dioxide we pump into the air.  And for the past century, people have been pumping CO2 into the atmosphere at unprecedented rates.

On land, the carbon is causing climate change.  But in the ocean,  it’s changing ocean chemistry – causing seawater to become more acidic.

That’s no good for all kinds of sea life, especially those with shells.

The oceans off Oregon and Washington are ground zero for ocean acidification, and Northwest scientists have been at the forefront of a new line of research.  They’re testing whether marine plants can help shellfish, and the more than $200 million industry built around them, cope with these changes.

Betsy Peabody of Puget Sound Restoration Fund helped organize the research on Hood Canal.  Federal, state and university researchers are running tests at the kelp farm. They’re looking at changes in pH, how much carbon is being taken out of the water, and how tiny marine snails called pteropods (important creatures at the bottom of the ocean food chain) are responding.

There’s also potential practical applications because being surrounded by low-carbon seawater makes it easier for shellfish to grow.

“You could create, in theory, a kind of seaweed filter, you know curtain, around where you’re growing shellfish. So that as water is circulating through that system, seaweed is pulling CO2 out of that water,” Peabody says.

The kelp project is happening in part because Washington state prioritized this kind of ocean acidification research back in 2012. Oregon’s committee appointed to work on the issue met for the first time this year and have yet to set priorities.

But researchers in the state are already looking at another marine plant that’s showing promise.

Oregon State University scientist Caitlin Magel sifts through a muddy clump of leaves and roots in the shallow water of a tide flat in Netarts Bay on Oregon’s North Coast.  She’s surrounded by a long, thin bed of sea grass.

“It’s the native eelgrass to the Pacific Northwest,” she says of the bright green grass, lying flat on the mud at low tide.

The seagrass uses photosynthesis like kelp. But unlike sugar kelp it persists from year to year and also has roots.

“They have this below-ground carbon storage that can lead to long-term sequestration of carbon,” she says.

Magel is trying to get a handle on just how much carbon these shallow eelgrass beds are pulling out of the water.  She’s taking samples from several bays along Oregon and Washington to see how this differs in each location.

Other scientists are seeing reductions in ocean acidification immediately around seagrass beds, especially during the day when the plants are activing using photosynthesis to grow.

“It could be grown in and amongst, for instance, an oyster aquaculture bed,” Magel says. “Or in the case of a shellfish hatchery, they could pinpoint where they’re drawing their water, so that they’re drawing from within an eel grass bed.”

There is still a lot that is unknown about the potential of kelp and sea grass to provide relief for ocean acidification. There’s healthy skepticism that marine plants can make a difference on a broad scale, because the ocean is huge and plants mainly grow in coastal areas.  And like terrestrial forests, there’s no way kelp and eel grass can keep up with the rate of human carbon emissions.

But the target of much of this early science in the Northwest is shellfish production. And by focusing on smaller-scale benefits, the research is creating a path coastal communities can follow to adapt to the changes that are happening outside their doors.

This story originally appeared on Earthfix/OPB.