Quips and a few punches at D.C. in governors' talk 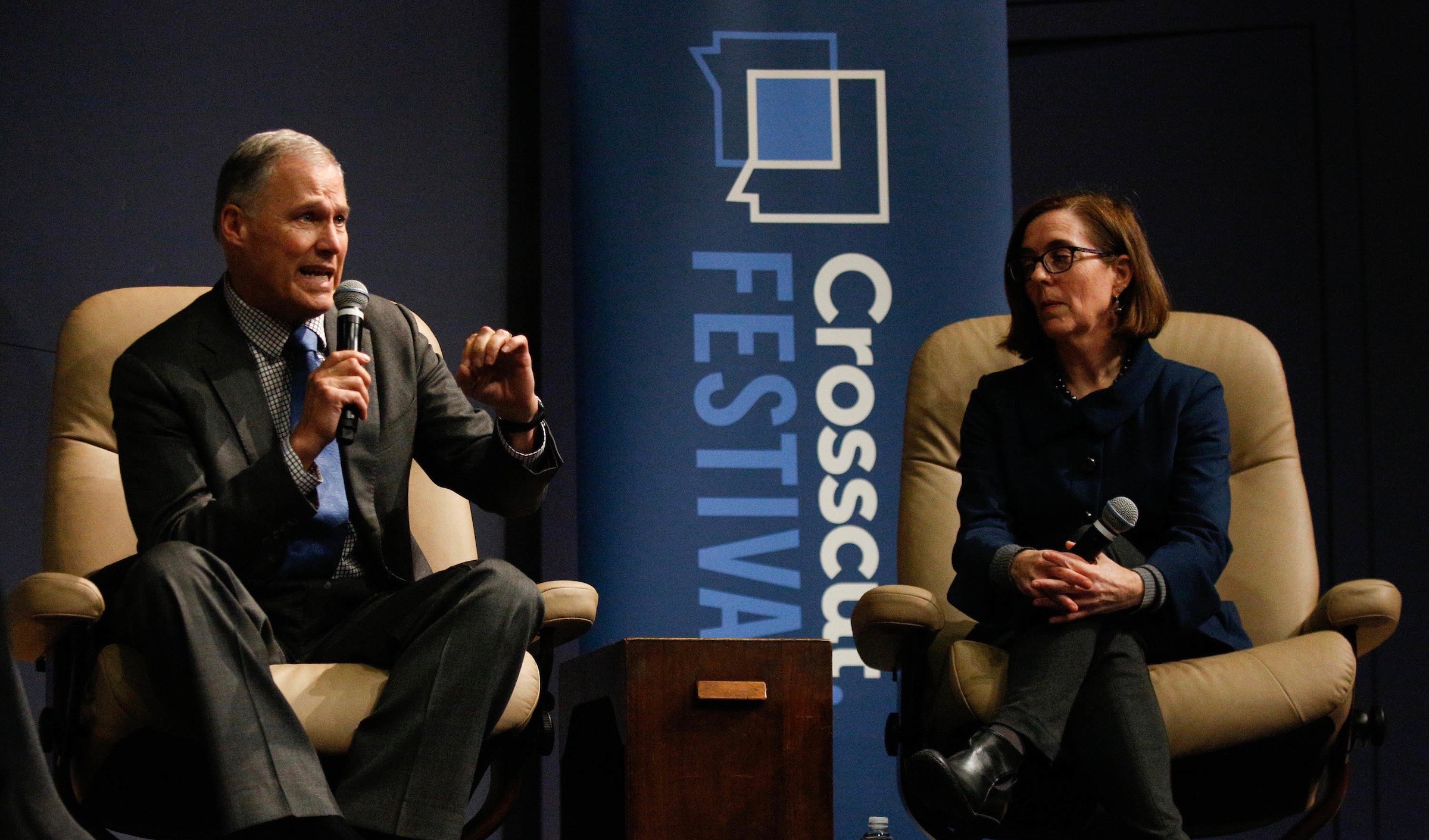 Washington Gov. Jay Inslee and Oregon Gov. Kate Brown pulled no punches Friday night in how much disgust they feel about the Trump administration’s desire to allow off-shore oil drilling along the U.S. coastline — that is, to allow it everywhere except Florida.

The kickoff to the first-ever Crosscut Festival featured an evening of substantive policy discussion between the progressive Democratic governors on topics ranging from climate change to immigration — plus doses of levity throughout that reflected the neighboring states’ friendly rivalry. But the pair of governors turned more serious when the conversation shifted to the potential for offshore drilling in the Pacific Northwest.

“I’m actually very concerned,” Brown told the crowd of 400 gathered in Seattle University's Pigott Auditorium. “It’s appalling to me that they would provide an exemption to the state of Florida and not all the other states that are concerned about their tourism economies, their outdoor recreation and, of course, just preserving the beauty and bounty of their particular states.”

Inslee and Brown were each especially pointed in their disdain for Interior Secretary Ryan Zinke’s decision to give Florida a pass. Zinke’s move has been criticized as a political favor, because Florida’s Republican Gov. Rick Scott, a Trump ally, is widely expected to run for U.S. Senate in the fall. It’s also been viewed as a potential personal perk for Trump, whose luxurious Mar-a-Lago estate, known as his Winter White House, is located along the coast in Palm Beach, Florida.

“To me, this looks like folks wanting to benefit political cronies in Florida,” Brown said, “or the president wanting to protect his estate in Mar-a-Lago.”

“It’s a really terrible idea," Inslee agreed. "They got their hand caught in the cookie jar regarding Florida, and they should be rightfully embarrassed by this."

Both Brown and Inslee said they had an opportunity to talk with Zinke recently to make their case as to why their states, too, should get an exemption and more broadly about why the U.S. shouldn’t allow off-shore drilling at all.

While Brown said she had a “good” conversation with Zinke, Inslee said he walked away “really dissatisfied.”

“He said, ‘Well, I want to work with you,’ ” Inslee said. The governor went on to suggest there was no need to work on anything, that Zinke should just stop.

Not able to resist the chance to get in another friendly jab at Brown’s home state, Inslee also remarked: “It’s unfortunate that we have to have this dust-up. Maybe if Mr. Zinke had gone to the University of Washington instead of the University of Oregon like he did … I don’t know, I’m not sure. Who can say?”

In all seriousness, Inslee said he believes “it’s extremely unlikely” the offshore drilling will ever actually come to fruition off Washington's coast, because of “so much public sentiment against this.”

“We’re going to do whatever is necessary to make sure that does not happen,” Inslee said, before throwing in another joke: “We’ve even considered buying Donald Trump a nine-hole golf course in Ocean Shores, so he would protect our shoreline as well.”

Over the course of their hour-long discussion, Brown got in her share of jokes and jabs, too.

She noted that Oregon has “the better Pinot noir” — Inslee: “we’re going to give them that” — and she also didn’t miss a beat after Inslee proudly listed off examples of how Washington state has been a leader in tech innovation.

“Wasn’t Washington, in fact Seattle, where you invented the $4 cup of coffee as well?” Brown replied, as the audience laughed.

The Crosscut Festival continues all day Saturday at Seattle University with seminars on a variety of social and public policy issues, as well as a morning keynote session featuring former Secretary of Housing and Urban Development Julián Castro. Follow Crosscut's live blog here for all-day coverage of the various panels.

In opening the festival Friday night, Rob Dunlop, president and CEO of Cascade Public Media — which oversees both Crosscut and KCTS9 — encouraged festival attendees to “push ourselves out of our bubbles” and to be “purposeful in seeking discomfort.”

“When we’re uncomfortable, we’re actually growing as individuals,” Dunlop said. “Our community can only benefit from more conversation, more debate, more engagement, more smart and thoughtful dialogue in any way we can get it.”