Seattle to clear minor pot convictions. Are felonies next? 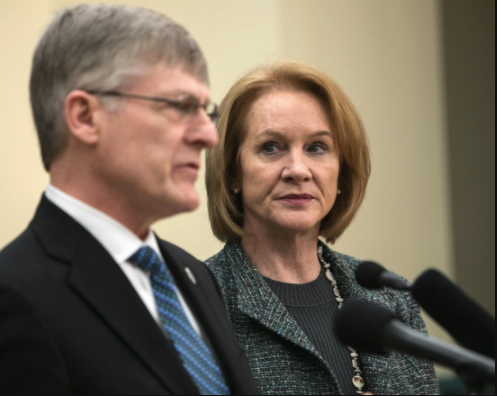 When Uncle Ike’s Pot Shop first set up on 23rd and Union, it was well-noted that young black men had for years been arrested at the same intersection for marijuana-related convictions pre-legalization.

In a Thursday morning press conference, Mayor Jenny Durkan and City Attorney Pete Holmes made a small step toward bridging that racially disproportionate gap between the years before and after weed legalization, which began in Washington in 2012. Beginning early next week, any person charged with a misdemeanor marijuana crime in the City of Seattle will be able to remove the conviction from his or her record.

The move does not offer a clean slate: unlike an expungement, those convicted of a misdemeanor will still have traces of an arrest on their records. However, it does mean they will not need to disclose convictions to employers, landlords, U.S. border agents or on paperwork for visa applications or other government-related bureaucracy.

Holmes said Thursday he expects the action to affect between 500 and 600 people.

“This is really a necessary step to right the wrongs of what was a failed war on drugs,” said Durkan at a press conference in Rainier Beach.

The ripples of today's executive action are limited to Seattle and therefore limited in broad impact: Seattle only prosecutes misdemeanors and does not have the authority to vacate marijuana-related felonies. And misdemeanor arrests have been relatively limited within city limits. Before 1997, most misdemeanors were charged in the county before more were shifted to the city. In 2010, when City Attorney Holmes was elected, he stopped prosecuting any marijuana-related misdemeanors. And then in 2012, weed was legalized.

Further, Seattle already bans employers from asking about criminal records and recently passed legislation limiting landlords from asking the same. Many applications already do not ask about misdemeanors, only felonies.

Still, Durkan and Holmes see the action as a first step, important in the face of years of racist enforcement. African-Americans are three times more likely to be arrested for drug use than white Americans, despite similar usage rates.

Both elected officials have also sought out any opportunity to stick a thumb in the eye of Attorney General Jeff Sessions’ return to a law-and-order approach to drugs and this allows for just that.

For those who do have a misdemeanor on their record, implementation is passive: The city will automatically vacate all charges. Still, for people who may not be sure whether they still have a misdemeanor on their record, the city says it will soon launch a portal with anonymous case numbers where people can find out if they are still in the legal system.

Durkan said Thursday she would support expanding the vacations to the felony level, but that the city would have to work closely with King County Prosecutor Dan Satterberg and state officials to move that forward.

Rev. Lawrence Willis, pastor at True Vine Missionary Holy Baptist Church and member of United Black Clergy, sees the step as important, especially to the black community. “Eliminating this is eliminating some barriers that African-Americans, especially young African-Americans, have when trying to get employed, trying to get an apartment and even getting an apartment,” he said.

Willis said, however, that as housing prices soar and many black Seattleites are displaced from the city, Seattle’s move will need to expand to the suburbs to see a more meaningful impact. “A lot of African-Americans are moving out of Seattle because of the housing and moving south, so we’re trying to work with each city — Kent, Renton, Federal Way — trying to attack this issue as well.”

Seattle technically needs to ask the Seattle Municipal Court to vacate the charges, but Holmes said Thursday that would not be an issue. Both he and Durkan have been in touch with Presiding Judge Karen Donohue, who is supportive.

Podcast | Is Washington ready for this school year?

From pandemic impacts to teacher shortages, education is being tested. We asked a teacher, a superintendent and a student to share their thoughts.