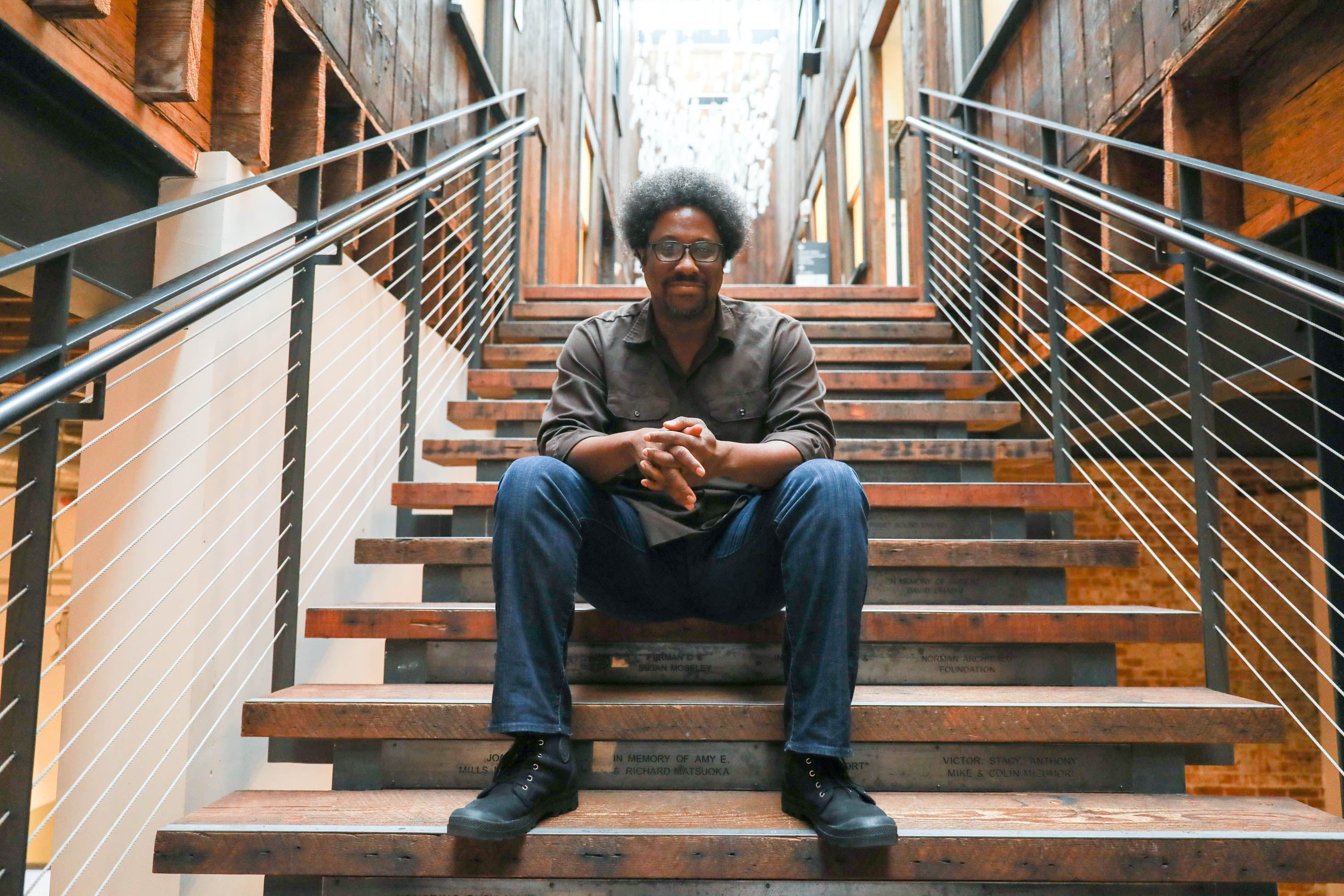 W. Kamau Bell visited Seattle the other day. The Oakland-based sociopolitical comedian and CNN host was invited by the Wing Luke Museum to tape a video for its Bruce Lee exhibit (Part 3 closes Feb. 11; Part 4 opens March 10). Bell, 45 years old, 6-4, and the father of two daughters (a third is on her way) has been a huge Lee fan since he was a kid growing up in Boston.

“The most exciting (Lee-related artifact) thing to see is his handwriting," said Bell. "A paper with his very neat and practiced penmanship. And then to see notes and things scratched out and things written in the margins. You’re seeing how his brain was working in real time.”

Bruce Lee attended the University of Washington, opened his first martial arts studio and met and married his wife Linda in Seattle.

While in Chinatown/the International District, Bell made a point to eat lunch at Tai Tung, sitting in the booth that Lee and his friends used to frequent. “Apparently he liked beef with oyster sauce. I ate all that up and there was a shrimp dish I ate. I'm walking the path.”

He sat down with Crosscut at the museum to talk his Bruce Lee love affair, black pride and loosening up when talking about things that might make you uncomfortable. This interview has been edited and condensed.

How did your parents talk to you about race and how will you talk to your own kids?

My daughters are all mixed race and black so I know they have a lived experience that is going to be very different from mine. And they're also women so it's like, I can't give them the same thing that my mom told me because she was talking to a black boy that she knew was going to be a big, black man. Whereas, I'm talking to mixed race and black daughters. So, there's an aspect of this where it's like, I don't know what I'm talking about because I'm not you.

So do you rely on your partner or on other sources to fill out the conversation?

It's something that me and my wife, Melissa, do together. There's also a lot more media available now than there was when I was a kid so that there's books that actually have been written to speak directly to mixed race kids and mixed-race families. And we have people in our lives of lots of different identities who are regularly in our kids' lives. We also make sure that the school that we put our daughters in is a school where they see lots of different types of people.  It's about creating an experience for them and also actively sort of programming their daily activities so that they're always being #woke.

Do you think white people are having an easier time talking about race?

I live in the Bay Area and we go to Solidarity Sundays, which are these meetings. The one we go to it's mostly white women who are trying to do the work. It's all about political action.

Solidarity Sundays was started in an inclusive way. . . It's all over the country. It [the group Bell goes to] just happens to be mostly white women but nothing wrong with woke white women. I'm married to a woke white woman.

For me, it's just good to be in rooms where people are doing the work, you know what I mean? And so, last year, we. . . my family went to a Kwanzaa celebration. Now that doesn't sound like the work but it actually kind of is the work because it's the work of building community. And it was a Kwanzaa celebration in Oakland, in a part of Oakland that we don't live in but we're like, I was like, we need to get out into the community and be seen and connect with people.

Everybody kept saying to me, as a female, that when you hit 40, there'll be this sense of confidence, this sort of assurance and you won't be worried so much. I'm just wondering if there's an equivalent of that in terms of your racial identity.

How old were you?

College age. It was around the time I was probably dropping out of college, when I had time to say, okay, well I'm not going to have a degree in East Asian studies. . . . But I like to read. So, when I decided to do the work myself, oh, like I've seen the miniseries Roots, but I've never read the book, Roots. And also finding media and music and comedy in the world that reflected my experience. . . [like] Jimi Hendrix, who's a pretty good guitar player and his songs speak to me, you know? Or this guy, John Coltrane.

For a while, I had this tension about I'm not black the way the world tells me I'm supposed to be black. And then finding out well, the world's not telling you about the wealth of black knowledge out there. So, if you go investigate, you're going to find your home and then you're going to be proud of that and you'll be proud to be black.

Do you remember when you first fell in love with Bruce Lee?

Kids like superheroic figures. . . people who seem bigger than humanity and greater than humanity. And also, have a sense of righting the wrongs. And so, at the same time, I'm liking Spider-man and Batman and Superman and all these other things, I also am like falling in love with the martial arts because the people who do the martial arts look like superhero figures. And then if you fall in love with the martial arts through movies, you eventually end up going down ‘Bruce Lee alley’. . . this genre called ‘Bruce Lee movies’ that later I realized he wasn't in most of those. But, he only did four [films]. But you go, okay, well let me watch those four. Oh, those are way better than everything else I ever watched.

I'm aware that somebody is going to walk into the Wing Luke and see my face talking about Bruce Lee whether they're Chinese or Asian or some other race and go, What is he doing here? But I'm also aware that Bruce Lee probably wouldn't have had a problem with it. Because his first student was a black dude named Jesse Glover. I feel like I'm living the lessons that I've learned from Bruce Lee by being here right now because I feel like I am an advocate for Bruce Lee.

You've done 16 episodes (two seasons) of your show, United Shades of America (a documentary series in which Bell travels the country). What have you learned about race?

We sort of framed United Shades of America [as being about race]. But, for me, it's more about like having done a show on the South side of Chicago that was ostensibly about gang violence and then having done a show in Appalachia that was ostensibly about what's coal country going to do once there's no more coal. All these people want the same things. Like there's no difference. Everybody wants safer communities. Everybody wants a better life for their kids than the one they have.

It's a show about the vast array of people in this thing called the United States of America.

One of the greatest conversations was when I sat down with Tara Houska at Standing Rock. I was like, Look can I have the dumb question conversation with you about Native American people? Is it Native? Is it Native American? What's the right term? And she said it, there’s not an agreement on all this. So, first of all, know this. Some people say indigenous. Some people actually want to own Native Americans. Some people say Natives. But if you want to be safe, just say Native people. We have an episode coming out this season. . . Spoiler alert . . . that is all about the Sikh [pronounced: “sic”] community. And up until I did the episode, I was like 'seek'. So that's already something I learned. So that's like, these are the little things.

They're big things, yeah. This is the thing I get so frustrated with about America as a whole. There's a reluctance to take in new information. And if you get corrected, it's fine to be embarrassed but move through it and do it better next time.

The first episode of your show profiled the Ku Klux Klan. And you were criticized by some who thought you were promoting the group and Richard Spencer — normalizing them.

The show is not United Shades of Positive America. It's the United Shades of America. And normalizing or giving a platform is if I let the Ku Klux Klan host the show. That's normalizing. That's giving a platform. Normalizing would be if at the end of the Richard Spencer conversation, I was like, you know what, Richard, you've made some good points and have given me a lot to think about. That Richard Spencer conversation was. . . I'm super happy about it.

Who can’t you wait to interview? Or, where do you really want to take the show?