Seattle vs. the East? Liberals vs. conservatives? Urban vs. rural? We debate the Cascade Divide. 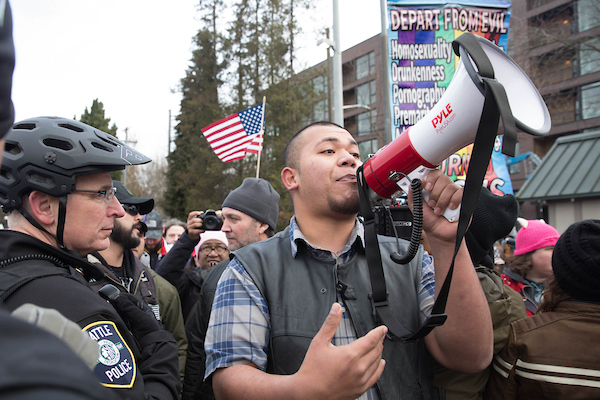 It didn’t take long for the “Bridging the Cascade Divide” panel discussion at the inaugural Crosscut Festival to blow up the premise of a neat east-west divide. Longtime Washington state pollster Stuart Elway said the new divide is more partisan (GOP vs. Dem) and urban/rural. In the 2016 election, some longtime Democratic counties in Western Washington went for Trump — the last time they voted for a Republican for president, the candidate was Herbert Hoover, he said.

Panelists agreed there were significant difference of opinion and outlook in the state and that we needed to do a better job of understanding one another. State Rep. J.T. Wilcox, GOP House floor leader and a farmer, said the “Legislature is not suited to the best kind of communication,” being full of partisan advocates.

Wilcox said that he preferred it when the Legislature was essentially tied between Democrats and Republicans, forcing people to find middle ground. The party caucuses, he said, have become narrowly focused because rural Democrats have been voted out along with urban GOP moderates.

Judge David Estudillo, from Grant County in Eastern Washington, said, “There’s a lot of elitism in the state." He mentioned "one city" without specifically naming the one on Elliott Bay. So the Cascade Divide might be more specifically a Seattle vs. Everyone Else issue.

Kelli Scott, editorial page editor and columnist for the Wenatchee World, said folks in her area are quick to blame Westsiders for their woes, like housing. People from Seattle are buying second homes in places like Chelan and Leavenworth, she said, and turning them into rentals, which makes it difficult for locals to find housing.

Scott also cited a controversy over a school in East Wentachee named after Robert E. Lee. Some people proposed changing its name after violence broke out over a proposal to remove a statue of the Civil War general in Charlottesville, Virginia. Locals in Wenatchee blamed outsiders (read: Seattle liberals) for interfering in a local matter. However, Scott said, it was the local Chamber of Commerce that encouraged the change, lest the name hurt business and the town’s image. It is now simply named the “Lee” school.

Moderator Ted McGregor, editor and publisher of Spokane’s Pacific Northwest Inlander weekly newspaper, wondered if the growth of tech in Eastern Washington might help people find common ground. He pointed to companies that make high-tech carbon fiber materials, or companies like Yahoo and others that have server farms on the dry side of the mountains. Judge Estudillo said that he’s seen the impact of that in Moses Lake and Quincy, where tech workers moving to the area are blending with locals.

Estudillo said that when he was appointed to his judicial seat by Gov. Jay Inslee, people criticized him as being appointed by a liberal Democrat who is disliked by Republicans. But, he said, when he ran for the seat, he found that when people heard that he had worked hard for his position and had more in common with them than they supposed, he found more acceptance — and he won the election.