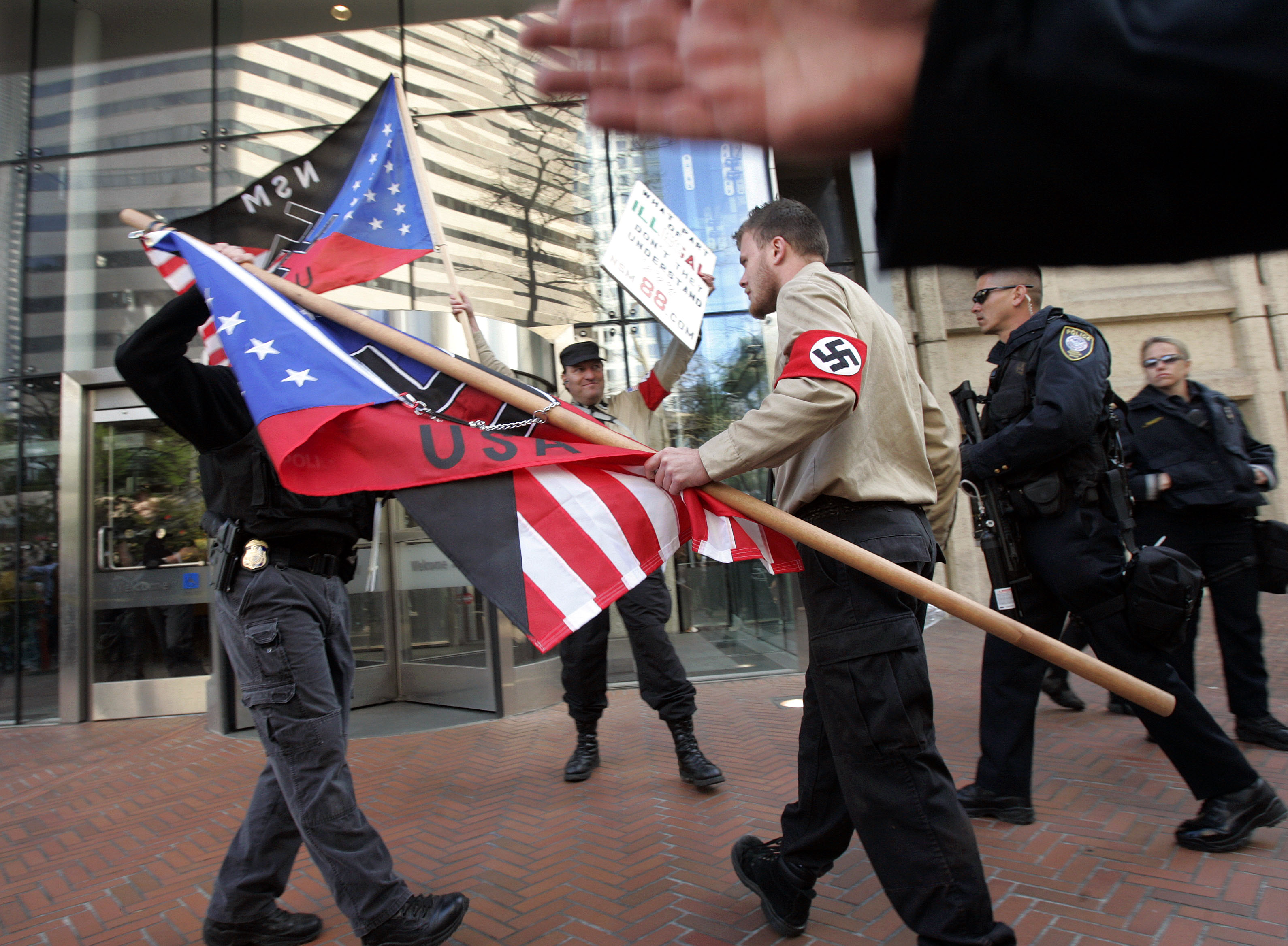 A police officer is inadvertantly hit by a neo-Nazi flag as he and another counter-demonstrator are led away from a rally of thousands of demonstrators in downtown Seattle during an immigration protest Monday, May 1, 2006. (AP Photo/Elaine Thompson)

Editor’s note: Neiwert will be part of a panel discussion Saturday at the Crosscut Festival. You can follow our coverage of the festival on our live blog.

It’s hard to believe. Divisions over race in this country suggest that the American Civil War is not yet settled more than 150 years after Appomattox. But there’s unsettling evidence that that isn’t our only unresolved war: We’re apparently still fighting World War II.

The Pacific Northwest has long been a sought-after enclave for people with extreme views and utopian, or dystopian, fantasies. On the far right, this has included wannabe Nazis, dating back at least to the 1930s, when fascist William Dudley Pelley of the so-called Silver Shirts declared himself America’s Hitler and ran a campaign for president from Seattle in 1936. In the ’80s and ’90s, the Nazi presence re-emerged with various groups in Washington and what some dubbed “the Fourth Reich of Idaho.”

That died down by the end of the century, but lately, there’s been a boom of white supremacism, militant nationalism and outright Nazism, even in liberal Seattle. Over the last year, there have been a number of demonstrations, protests, fights, a shooting at the University of Washington and other incidents.

Last fall, for example, a Seattle man went out in public wearing a swastika armband, and was knocked cold by a man offended by it. The swastika man was subsequently interviewed on KUOW-FM, during which he was allowed, anonymously, to tell his side of the story. Listeners were outraged that he was given such a public platform to air his views. It’s the 21st century, and a topic of local conversation over coffee is: Is it OK to punch a Nazi?

Seattle journalist and author David Neiwert has long tracked America’s far right and continues to do so for the Southern Poverty Law Center, which monitors hate groups. In his new book, “Alt-America: The Rise of the Radical Right in the Age of Trump,”  he traces the trends that are bringing us this revival of hate, intolerance and anti-democratic ideology.

The far right has been active for decades, but according to Neiwert, has been boosted by a number of recent factors. One was the election of our first black president, Barack Obama, in 2008, which energized and reawakened racial animus among many whites. The far right has always required an alternative universe in which to thrive, one that sees conspiracies and threats everywhere. Exhibit A is the “birther” movement to delegitimize Obama, an African-American Christian who was accused of being a foreign-born Muslim and an illegitimate president.

This tactic was previously tried by the American right wing and pro-Nazi groups in the 1930s. They claimed that Herbert Hoover was not a citizen, and Franklin D. Roosevelt was Jewish. It’s well known, of course, that one of the main proponents of the false and racist birther movement was Donald Trump, who fanned the flames of paranoia.

Which brings us to a second major factor in the far right’s resurgence: the election of Trump. His embrace of white nationalism and his appointment of its avatars to White House posts, has sent more than a dog whistle to extremists like neo-Nazis, anti-immigration activists and the Ku Klux Klan. Trump is not merely sympathetic — he is mainstreaming their beliefs, putting them at the core of a major party, the Republicans.

Neiwert told me that the one reason the fractious far right has not coalesced before was the lack of a single charismatic leader. Now, however, many see Trump, with his authoritarian impulses, as that new leader. No wonder some neo-Nazis celebrated his election with their arms raised in Hitler-style salutes.

There are other trends that have caused things to build, Neiwert contends. The attacks of 9/11 fueled anti-Muslim and anti-immigrant hate and suspicion.

Neiwert says the new alt-right followers are largely recruited from a younger generation: millennials. That could explain why social media has had a key role in this. Neiwert reports that actual hate groups — guys who meet in person as an organization — have given way to websites, chat groups, flash mobs and “organizations” that exist primarily online.

The neo-Nazis have websites like the Daily Stormer (its service was canceled by several major digital companies but the site is protected now by a Washington state internet security company in the name of free speech); there are also many far-right trolling events during which online thugs abuse people they disagree with, ranging from Jewish journalists to female gamers. Nazis now feel that they don’t need to operate from compounds in Idaho anymore.

While many people in Seattle believe that Nazis and white nationalists are antithetical to our region’s values, a lot of them are attracted to the region. One is Harold Covington, novelist and podcaster at the Northwest Front website. Covington is a longtime, unabashed Nazi-admiring white supremacist who promotes white settlement in the region — Washington, Oregon, Idaho and western Montana — to form an all-white ethno state that will one day fight for its independence.

Covington argues the Northwest is good territory for white supremacist designs, and sadly, he has a point: This is one of the whitest regions in America, long known for its racial exclusion efforts, including Oregon’s infamous anti-black laws of the 1840s, the Chinese exclusions of the 1880s and the Japanese internment of the 1940s. And let’s not forget massacres and displacement of Native Americans.

A faction of survivalists has pegged the rural eastern portions of the region as part of the “American Redoubt,” a refuge for those who seek to escape cities and multiculturalism and to prepare to defend themselves if and when American society collapses.

Indeed, Seattle and the Northwest can seem like bubbles of progressivism where Hillary and Bernie voters can feel relatively safe, but we shouldn’t be surprised that there are Nazis and far-right extremists among us. It’s the place and the time we live in. I asked Neiwert if it was OK to punch Nazis, and he said no, that’s just the kind of reaction they want to provoke.

Saving America from the far right will mean rededicating ourselves to saving our Democratic institutions, he said. Instead of punching, we should organize and protest, but most of all vote and help others to vote. And don’t take any of our freedoms for granted.

This column originally appeared in the January issue of Seattle Magazine.