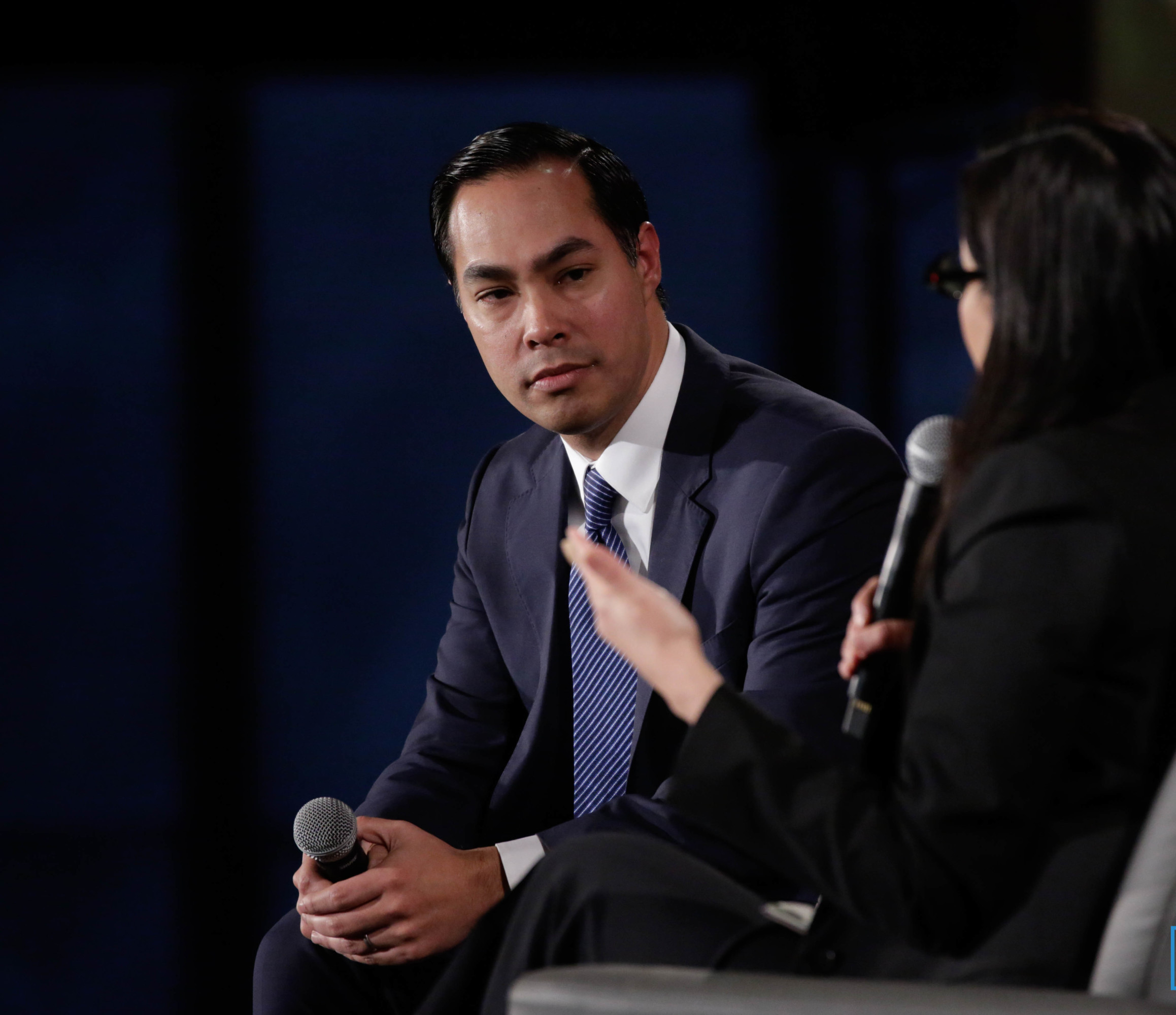 If Julián Castro is, indeed, the Democrats' next best hope for president, he's not entirely ready to take up the mantle as a potential nominee. The Texas politician and former Housing and Urban Development Secretary under the Obama administration didn't necessarily eliminate the prospect of a presidential run in 2020 when interviewed by Crosscut on Feb. 3. He winningly deflected the question before answering: "I might."

Castro was the headline speaker at Crosscut's inaugural Crosscut Festival at Seattle University, roaming the campus without an entourage that usually trails all sorts of high-profile people. Castro, nonetheless, can elicit great emotion among those who were swept up by his 2012 keynote address at the Democratic National Convention, a speech that chronicled his family's story of humble beginnings — an orphaned grandmother from Mexico who worked as a maid — to graduations with his twin brother, Joaquin, from Stanford University and then Harvard.

Castro was the first Latino to deliver such a keynote and the moment vaulted him to national celebrity. He had been rumored to be Hillary Clinton's vice presidential nominee in 2016 and when that didn't happen, it left his fans wondering, er, hoping. After being interviewed by Crosscut, Castro was approached by a tearful Rocio Lopez who had driven hours to see him. Lopez's late mother figured Castro was, indeed, going to be the country's first Latino president.

The following is an edited and condensed interview between Castro and Crosscut's managing editor, Florangela Davila.

What has been your reaction, your feelings, your thoughts this past year?

That this seems unprecedented in our nation’s history to have an administration that in so many ways is deficient. Secondly, it seems more divisive and intentionally divisive. The thing that I heard over and over from folks is how many people say that it keeps them up at night. That they feel more anxious now than they have in a long time because they don't know what's going to happen next. The division, the anxiety, the deficiency, the incompetence of this administration, it's just been amazing to watch in a bad way.

What should the Democratic Party’s message be going forward?

Two messages: Number one, that the Democratic Party is the one that stands for opportunity for everybody no matter who you are. That we face a changing world in the 21st century and we need to make sure that everybody is equipped with 21st century opportunity, no matter if you have a lot of money or you don't, the color of your skin, your religion, whether you're gay or straight.

The second part of the message is the one that I just talked about, which is accountability. That the only way you're going to get real accountability in Washington, D.C., is to put Democrats in charge of at least the House of Representatives, so that you have a little bit of a check and balance there. The vision that we need to have for the years forward, I think, is to recognize that the United States needs to be the smartest, the strongest and the safest nation in this 21st century.

I want to get to the question that everybody wants to ask.

'Which one am I?'  That's the question that I get asked the most. 'Which one are you?' My twin brother, Joaquin Castro, is on that Intelligence Committee and he's on Chris Hayes and Jake Tapper every night and so I always get confused for him these days. That is the question that everybody wants to know. He says I'm a minute uglier than he is.

He's probably bought Twitter followers, so ... Mine are natural, organic.

So, are you going to run for office?

I might, I might. I'm going to decide after the 2018 election. I'm going to focus the next few months on getting out into the country. I just launched a PAC called 'Opportunity First' that's focused on electing young progressive candidates. … We have a lot of them that are running, as you all know, in this cycle.

I wanted to talk a little bit about identity and this notion of seeing representation and having a Mexican-American, a Latino — or a Latina — president. The fact that you are breaking ground and potentially could be the first. How do you move through the world as a Mexican American man?

For somebody in public office ... If you're in public office, your number one responsibility is to represent everybody that you're elected by. At the same time, I know, especially the higher that you go, that you also represent something to people from communities, whether it's a Latino community or African-American community, LGBTQ community. How do you carry that responsibility?

The way that my brother Joaquin and I have done that over the years is to try and make sure that we go and visit schools and encourage young people that are growing up like we did, in the Latino community, and let them know that they can achieve their dreams, and not to ever believe that, no matter what other people say, that you can't. To always believe in yourself and to surround yourself with people who love you and care about you. Then also when the conversations happen, in terms of public policy, you have a perspective to give, and I think it's incumbent upon you to give that perspective.

During your time as HUD Secretary, was there something you learned about how politics work that would be useful for us to know?

Yeah, the squeaky wheel does get the grease. Whether it's a zoning case where folks show up to let their opinion be heard at the hearing, or it's some sort of federal investment. For example, CDBG, Community Development Block Grants, as many of y'all probably know, we administer that at HUD. Mayors who were active with the department, who would take the time to go visit, who would call in, who had staff that dealt with our staff. It's not like we didn't pay attention to the other ones but there was no question that there were communities that you interacted with more because they took the initiative. As a policy maker, you need to balance that, but that would be my advice for folks that are active in their neighborhood associations or other organizations.

What are some ways that we can solve our affordable housing crisis? You went to school in the Bay Area [Stanford University for undergraduate studies]. There's a lot of discussion in Seattle that we don't want to be the next Bay Area.

My first piece of advice would be to be even more bold, to take even more of an initiative, to continue to look at land use restrictions and how you can ease some of those restrictions to lower the cost for developers to create affordable housing. Also, to think regionally.

I wanted to hear your thoughts on Amazon and HQ2. I think two cities in your state of Texas are on the shortlist.

With respect to Amazon, I was very proud that the current mayor and county judge, basically county supervisor, of San Antonio withdrew, said that they would not compete for that second headquarters. Not because I don't think the second headquarters would be great in many ways, but because I don't believe that we should race to the bottom in terms of these direct incentives to companies.

Brain power is the new currency of success in the 21st century global economy. We have rising income inequality. A smarter city, I think, would just get to the heart of investing in stronger education, in stronger affordable housing opportunities and directly in people and not through basically a middle man of this company that you're hoping. Of course, they're going to create jobs; you don't know how long they're going to last, and then a lot of times just exacerbate that income inequality.

My advice to mayors and governors across the country would be, ‘Hey. You need to look at it kaleidoscopically, the whole thing, not just how much money you're going to give that company, because the impact it would have on your community is so much greater than that on the people.’

Can you weigh in on the complexity of immigration and its solutions?

My hope in the short term is that they'll get something done before March 5th, some sort of compromise, some money for border security. Obviously not money for the whole wall but some money for border security plus a path to earn citizenship for Dreamers. Then tackle the larger challenge and find a solution for the 11 million who are here. My fear is that the Republican Party allows the fear and strife within that base to control where they go on it and prevent a reasonable productive solution on immigration.

What has it been like to watch what’s happening at HUD, which is now being led by Ben Carson?

I disagree with a lot of the moves they've made. The $6 billion budget cut proposal from the administration. They did away or they've put off what was called Affirmatively Furthering Fair Housing, which was a ground-breaking rule that we promulgated in 2015. Essentially following up on the 1968 Fair Housing Act that said, 'OK, communities, you need to get more serious about ensuring that there's opportunity everywhere in your community when you use federal funds that would help further desegregate communities.' Now they've put that on hold. There are a couple of other things they’ve put on hold. I saw the news from The Washington Post the other day on some of the ethical issues, which are disappointing.

I also think this administration in general just has a problem with not being able to admit mistakes. If you see a leader, a boss or a public servant or whoever they are, that can't admit when he or she is wrong, run the other way. That's one of the things that's missing, whether it's at HUD or ... Donald Trump is example A in that regard, just can't admit when he's made a mistake.