Democrats had full control of the Legislature and the Governor’s Office. So what did they do with that power? 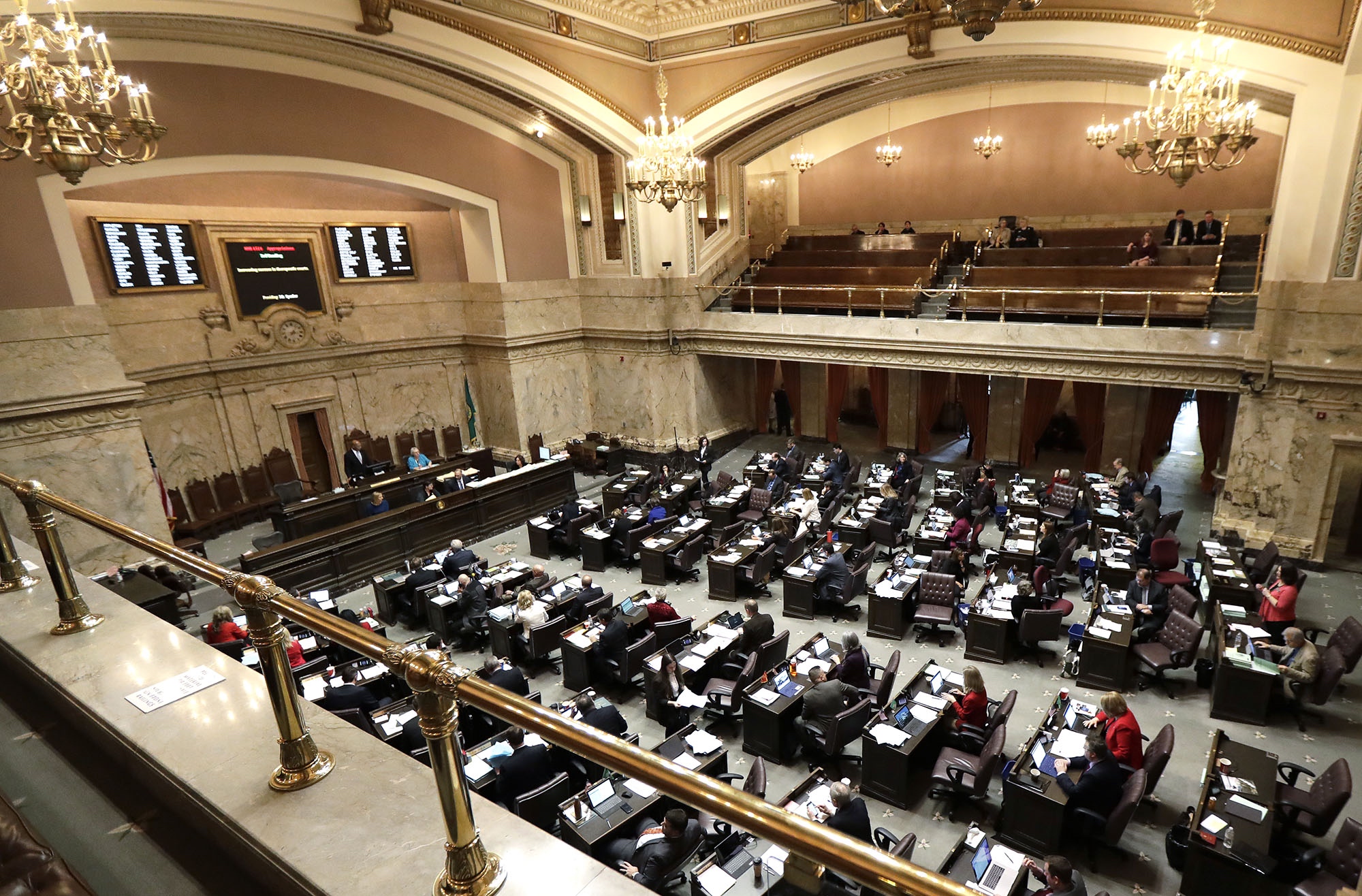 The Washington state House of Representatives convene in session on Feb. 7, 2018. (Photo by Ted S. Warren/AP)

This was the first time in Jay Inslee’s governorship that Democrats had the keys to drive Olympia wherever they wanted — thanks to having control of both the Washington state House and Senate.

So what did Inslee and his fellow Democrats do with those keys?

It turns out they were as skittish with actually raising taxes as Republicans have been in the past. Maybe that’s partly because this is an election year in which the Democrats cannot afford to lose even one seat in either chamber if they want to remain in power.

Democratic legislators as a whole, it also turns out, were not as gung-ho about fighting climate change as Inslee. Ditto with repealing the death penalty.

But after five years of a GOP-dominated Senate stopping numerous social-policy bills, frustrated Democrats in power this year unleashed a flood of these proposals to the governor’s desk for his signature.

Here are seven big areas where the main action unfolded:

For years, bills involving women's rights and gender equity had stalled in the formerly GOP-controlled Senate. This year, a logjam of those bills broke through.

The most controversial bill to pass was one by Sen. Steve Hobbs, D-Lake Stevens, that requires an employer who provides health insurance to include both contraceptive and abortion coverage at no extra cost to that employee. This was in response to the U.S. Supreme Court’s so-called “Hobby Lobby” ruling in 2014 that declared for-profit companies could refuse to pay for birth control on religious grounds.

Hobbs’ bill passed mostly along party lines, with moderate Sen. Joe Fain of Auburn being the only Republican to cross the aisle.

The Legislature also passed a bill by Rep. Tana Senn, D-Mercer Island, that bolsters the state law requiring that men and women in equal jobs with equal duties be paid the same. Among other changes, the bill has provisions to enable women to find out the pay of their male counterparts. Sen. Maralyn Chase, D-Edmonds, said of the measure: “I cannot tell you how many years we’ve been waiting for this.”

Also, a bill by Sen. Karen Keiser, D-Kent, sailed through to require the state’s Human Rights Commission to set up a work group and develop model policies and best practices for employers and employees to keep workplaces safe from sexual harassment.

“We’re taking care of a huge backlog that has already been worked on,” Keiser said. She said the #MeToo movement of the past several months helped raise the prominence of these issues.

She speculated that in the 2019 session the major social issues that would take priority would be health care for women and dealing with problems of the 21st century gig economy, where more people work as contractors. “I don’t think we’ll have the problems of sexism and equal pay fixed,” she said.

This is another bill that had stalled repeatedly under the previous GOP-led Senate only to pass this year.

The measure establishes an easier process for cities, counties and school districts to move from citywide elections to elections by districts — potentially avoiding lawsuits over a lack of representation for significant groups of ethnic voters whose candidates have continually failed to win citywide elections. (Read more from a previous Crosscut story here.)

Last year in a strong bipartisan vote, the Legislature passed a big property tax increase to fund public schools. They added 81 cents to the formula to hit the maximum allowed rate of $2.70 per $1,000 of assessed property value. The increase was supposed to finish fixing the long-running school-funding shortfalls that the Washington Supreme Court in 2012 ordered the Legislature to address.

But with a good economy shoveling more money than expected into the state’s coffers — and an outcry from property owners over their soaring tax bills — both parties rushed to cut property taxes for one year.

The GOP had wanted to abolish the entire increase for this year. That would have been problematic, though, because some property owners had already paid part of this year’s tax bill and they couldn't be refunded, because refunds are illegal. Democrats eventually settled on a one-year tax rate cut of 30 cents per $1,000 assessed value and managed to pass it.

One complication: The state still needed almost $1 billion this year to meet the Supreme Court’s requirements to improve public education.

The Democratic majority addressed this by using some of the unexpected extra revenue. Normally, a portion of this money would be earmarked for a rainy-day fund — any use of which requires approval from a 60 percent majority of the Legislature. But the Democrats structured the spending to avoid the reserve fund and deny Republicans the extra leverage on spending that they would have had under a super-majority requirement. The Republicans complained of budget gimmicks.

Will the Trump administration, already taking legal shots at California for its immigrant-protection policies, target Washington for defying it on net neutrality?

Despite last December’s action by the GOP-dominated Federal Communications Commission to dismantle rules that forbade broadband providers from slowing down some sites or giving special treatment to others that pay extra, the Washington state Legislature — backed by Inslee and Democratic state Attorney General Bob Ferguson — enacted net neutrality in Washington state.

Broadband groups warned lawmakers that a statewide net neutrality law might spark legal action by the feds. Inslee has said the state has researched this issue and believes Washington can withstand a lawsuit should the Trump administration pursue one.

Several other internet-related bills failed, despite bipartisan support, including ones to protect some consumer information and to provide additional money for rural broadband.

This year, the Senate passed the bill 26-22, with four Republicans voting for repeal and three Democrats voting against it. Behind-the-scenes counts in the House showed it did not have enough votes to pass there, and Democratic leadership never brought the bill to the floor for a vote. Inslee’s moratorium on executions remains in place.

CHANGE IN STANDARD ON POLICE SHOOTINGS

Washington state’s standard for prosecuting a police officer who shoots someone has long been uniquely difficult, requiring certainty that the shooting was done out of malice.

Late in the session, the leaders of Initiative 940 to make prosecutions easier came together with police groups and key legislators to ensure lawmakers passed a bill removing the malice requirement.

This is Inslee’s signature cause, but for five years, a Republican-controlled Senate stopped him. In 2018, a Democrat-led Legislature did.

The measure stalled, however, and Carlyle acknowledged last month that one problem for some senators was the likely 8 cent-per-gallon increase in gas prices the proposal included. Carlyle and Fitzgibbon expressed optimism about success in a year or two, saying legislators need time to get used to the concept.

A broad coalition of groups is already pushing to put a carbon tax initiative on November’s ballot.

Meanwhile, other carbon-related bills — including ones setting standards for zero-emission vehicles and establishing goals for electric-hybrid airplane usage — also failed.

Inslee noted that the carbon tax proposal got farther into the legislative process than ever before. He said: “We’ll be back in January.”

This story has been updated to correct a description of the sponsorship of an initiative.