Activist Maru Mora Villalpando takes on immigration case: Her own 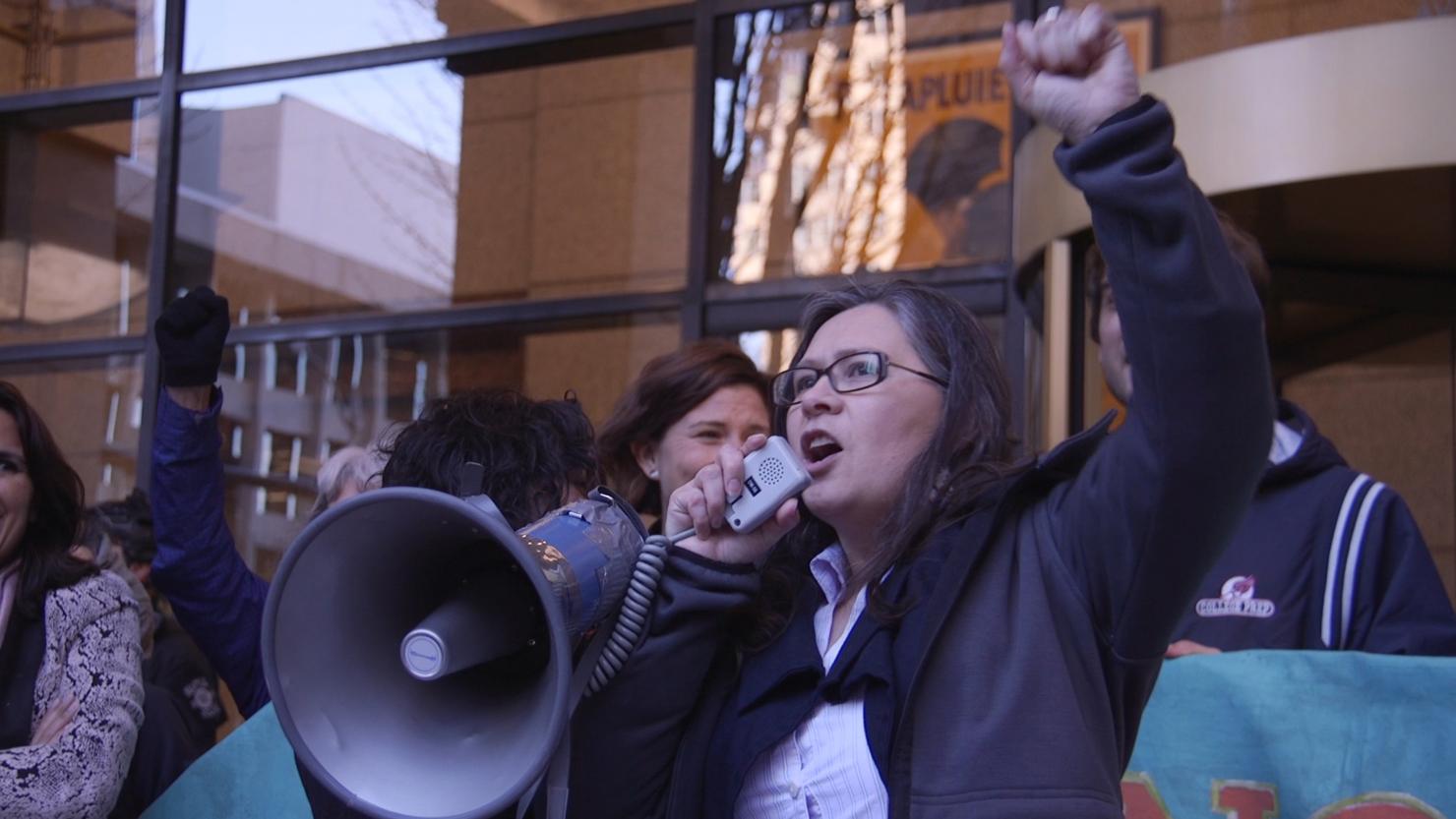 In a show of solidarity with Villalpando, Seattle City Councilmember Teresa Mosqueda was among those who attended the rally in front of the courtroom early Thursday morning.

“We won’t be intimidated. We won’t back down. We won’t let these tactics of fear and division perpetuate our community,” Mosqueda said. “Maru has been with us fighting shoulder to shoulder for immigrants and refugees and farmworkers, and we’ll be there with her standing to make sure she, and no other immigrant, is [not] deported unfairly and unjustly.”

Mosqueda also noted that — in a rare move — all nine members of the Seattle City Council had in January issued a statement in support of Villalpando: “Seattle is a welcoming city in a welcoming state, and we condemn the targeting of activist and community leaders and cannot stay silent on this un-American activity by ICE,” the statement read. Mosqueda pointed out that Villalpando, like many other undocumented immigrants, has no criminal record and has been living in the U.S. for decades.

Villalpando, 47, who is originally from Mexico, first arrived in the United States in the 1990s on a tourist visa that has since expired. An outspoken and oft-quoted immigration activist, she has appeared on news channels such as MSNBC and Democracy Now and has been an advocate in the region for about two decades. She is known as a key organizer of protests at the Northwest Detention Center in Tacoma.

In December, Villalpando received a notice to appear in immigration court, a first step towards deportation. Documents released soon after showed that federal officials with U.S. Immigration and Customs Enforcement learned about Villalpando through the press and may have even chosen to target her because she is active in protests.

Villalpando is one of several well-known activists recently targeted by ICE. Most recently, ICE detained Ravi Ragbir, executive director of the New Sanctuary Coalition of New York City. Federal officials also picked up Eliseo Jurado Fernandez, the husband of Ingrid Latorre, who is fighting deportation as she takes sanctuary in a Colorado church. Jean Montrevil, co-founder of the New Sanctuary Coalition, was also detained and subsequently deported.

Inside a downtown building, up high on the 25th floor, Villalpando, her daughter Josefina, Seattle attorney Devin Theriot-Orr and Elizabeth Simpson, an attorney with the National Immigration Project of the National Lawyers Guild, and several other supporters crammed into a small courtroom filled with other families facing immigration Judge Brett M. Parchert.

In court documents filed earlier this week, Villalpando’s attorneys had asked Parchert to throw out the deportation case against her, arguing Immigration and Customs Enforcement had unlawfully targeted her because of her pro-immigration stance and anti-ICE statements.

“We expect government officials to discharge their duties in a fair and non-discriminatory way. By targeting Maru because of her political activism, ICE is directly contravening that trust, and threatening our fundamental right to free speech and assembly,” Simpson said. Theriot-Orr added: “ICE’s actions in Maru’s case are a transparent attempt to stifle dissent by targeting specific political viewpoints for retaliatory action.”

In documents obtained through a Freedom of Information Act request, with the help of Democratic U.S. Sen. Maria Cantwell, government officials explicitly stated that Villalpando came to the attention of ICE’s local office “after an interview was published in the ‘Whatcom Watch,’” a grassroots environmental newspaper in Bellingham. The government official also noted that although Villalpando has no criminal history, she “has extensive involvement in anti-ICE protests and Latino advocacy programs” and has “become a public figure.”

ICE has denied targeting Villalpando for her political stance, noting that the agency “does not target unlawfully present aliens for arrest based on advocacy positions they hold or in retaliation for critical comments they make. Any suggestion to the contrary is irresponsible, speculative and inaccurate. ICE focuses its enforcement resources on individuals who pose a threat to national security, public safety and border security." In previous statements, ICE has said Villalpando has “been charged by ICE with being unlawfully present in the United States, and her case is currently under legal review.”

The apparent targeting of immigrant-rights activists has even caught the attention of United Nations human rights experts who, citing what “appears to be a part of an increasing pattern of intimidation and retaliation,” have called on the U.S. to protect them from deportation.

Asked if he was optimistic Villalpando’s deportation case would be thrown out, Theriot-Orr called the strategy to defend her “novel” and said he thought it was “a great opportunity for the judge to take a stand” against the current Trump administration’s immigration policies.

After the hearing, Villalpando walked out to a cheering crowd, addressing them in both English and Spanish.

“It really breaks my heart to see all those families,” Villalpando said, referring to the others still waiting inside the courtroom. “The only solution is to dismantle ICE.”

Lesley Hoare, a 42-year-old resident of Forks, drove to Seattle to attend the rally because “Maru is, I think, the person who has guided our community the most.”

“Maru has definitely defended everyone,” Hoare said, explaining that Villalpando had worked to defend immigrants in Forks.

“Please keep fighting,” Villalpando implored the crowd. “There’s no way we can stop.”