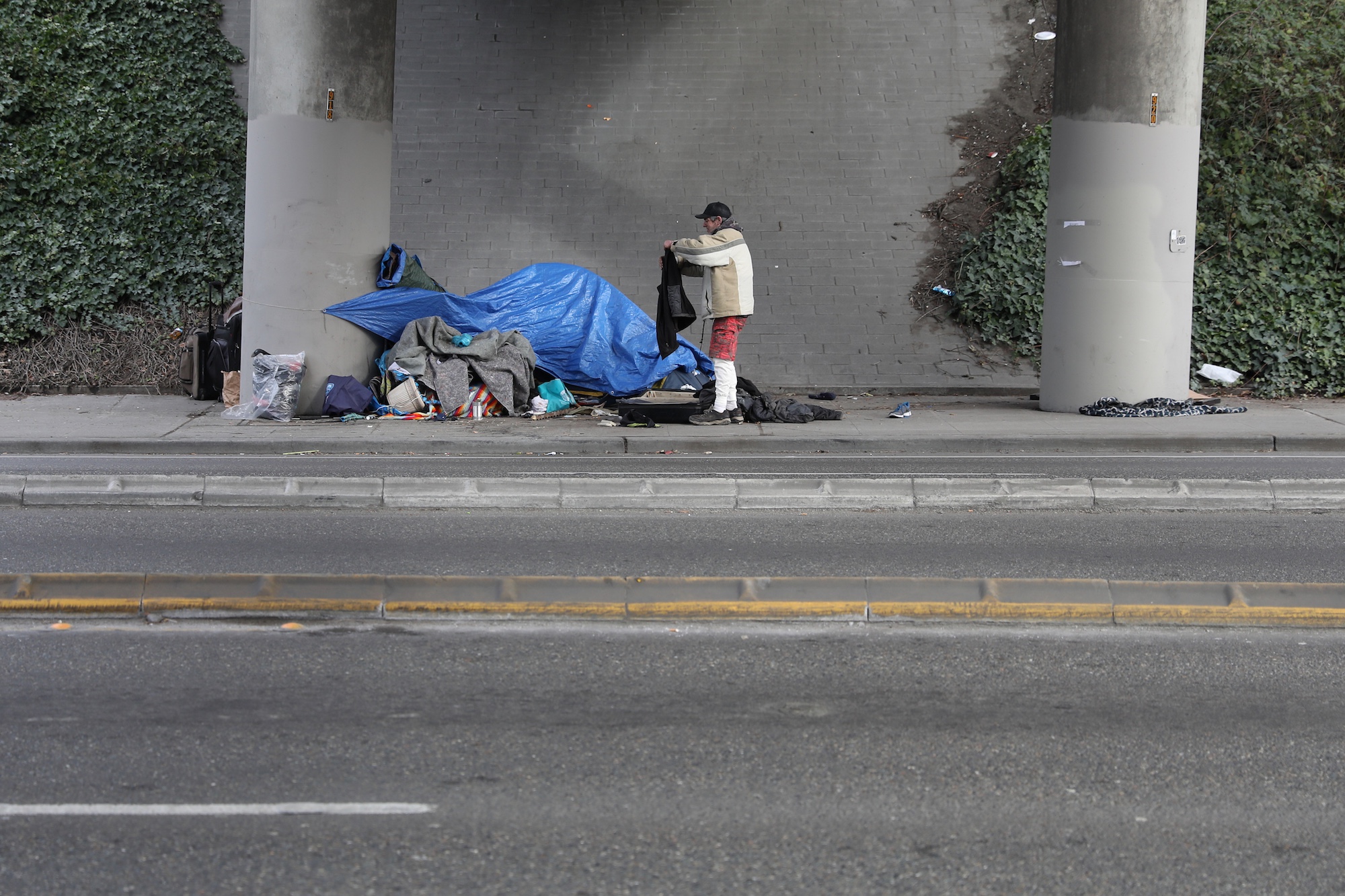 A man outside a small encampment under a bridge in Seattle (Photo by Matt M. McKnight/Crosscut)

Big business groups like the Chamber of Commerce, which boycotted the whole process, have predictably begun to pound the drumbeat of austerity. Instead of seeking new revenue, they say, the city should demonstrate better results with what it’s got.

Clothed in the language of fiscal responsibility, this kind of rhetoric is disingenuous in the extreme. Its real thrust is to undermine the credibility of the only institution – government — that is in a position to effectively and accountably bring solutions to the homelessness crisis to scale.  It also serves to deflect attention from any honest analysis of the crisis itself.

In one way, the causes of homelessness are complex, a tangled web of sharpening economic inequality, fraying social bonds, opioid addiction, systemic racism and mass incarceration, and a waning demand for the manual skills that once buttressed a middle-class existence. All that is compounded by decades of federal disinvestment in public housing, social services, and mental health.

But in another way, homelessness is very simple. It is not having a home — a place of stability, safety, privacy, refuge from the elements. If there is one characteristic that unites the homeless population in all its great diversity, it’s that the overwhelming majority say they would move into affordable housing if it were available.

These days, finding a home is no simple matter. A new report by the National Low Income Housing Coalition reveals that for every 100 extremely low-income households (those at 0 to 30 percent of area median income) in the Seattle metropolitan area, there are only 28 affordable and available units — well below the still dismal national average of 35 units.

So what happens to the other 72 Seattle households, the ones that lose out in the mad scramble for those 28 affordable units?

Many are basically signing their paycheck over to a landlord every month, spending half or more of an already meager income on rent and utilities. These are people with scant buffer against life’s normal if unpredictable calamities, putting them at risk of falling into homelessness. It should not surprise us that thousands do.

The affordable housing gap, as the National Low Income Housing Coalition calls it, presents a basic structural obstacle to reversing the steady climb of annual homeless counts. For a given individual, the precipitating cause of homelessness might be a lost job, a medical emergency, a new disability, an addiction, a mental health crisis, or an abusive relationship. But whatever life challenges a person faces, there is widespread agreement that the best first step to surmounting them is stable housing: “housing first.”

Seriously, try kicking an addiction or getting a job while living in a tent. And here we run up against some cold, hard math. You just can’t fit 100 households into 28 units of housing. Last year King County’s Coordinated Entry system, which has a wait list of thousands, placed homeless single adults into housing at an average rate of 11 per month. The housing just isn’t there.

A revenue stream of $75 million, devoted entirely to new housing and assuming the City can leverage state and federal dollars, would yield around 450 units per year. This would more than double the current pace of construction of deeply affordable units in Seattle. Still, it is less than a quarter of what is needed to close the housing gap for extremely low-income households over the next ten years – and that’s according to a conservative calculation (see Appendix A of the task force’s report).

Aren’t there other strategies that are cheaper than funding new housing, like long-term vouchers to help people with rent? Up to a point, yes. But there is no cheap solution and no substitute for a massive investment in new housing, including Permanent Supportive Housing for many people who will need long-term support to cope with a lifetime of trauma.

Closing the housing gap is an infrastructure project on a grand scale, for good reason. For years we have treated the housing crisis as a force of nature beyond the boundaries of public responsibility. It’s time to catch up. The people of Seattle, especially our neighbors sleeping outside, deserve to see results. A $75 million Employee Hours Tax should be considered an absolute floor for a meaningful initial investment this spring. Another $75 million from other progressive revenue sources— such as a possible local estate tax or a tax on vacant properties, both mentioned by the task force for further study —  by the end of 2018 will add up to a respectable start.

During public testimony March 14 on the task force’s recommendations, a homeless man in the audience stopped breathing. After a grim, tension-filled half hour he was carried away to Harborview. A friend of the man, testifying minutes later in his place, told the room that he lives in a tent and suffers from ALS.

It was real life tragedy more dramatic than any piece of political theater, and a sobering reminder that the time for action is now. In this city of immense wealth, where towers and tunnels and train tracks take shape daily, we can surely find the resources and the political will to realize the basic right of housing for all.