A business tax for homelessness: Will it have legs the second time around?

It’s a $75M idea and under new Seattle leaders it could have a better chance of passing. 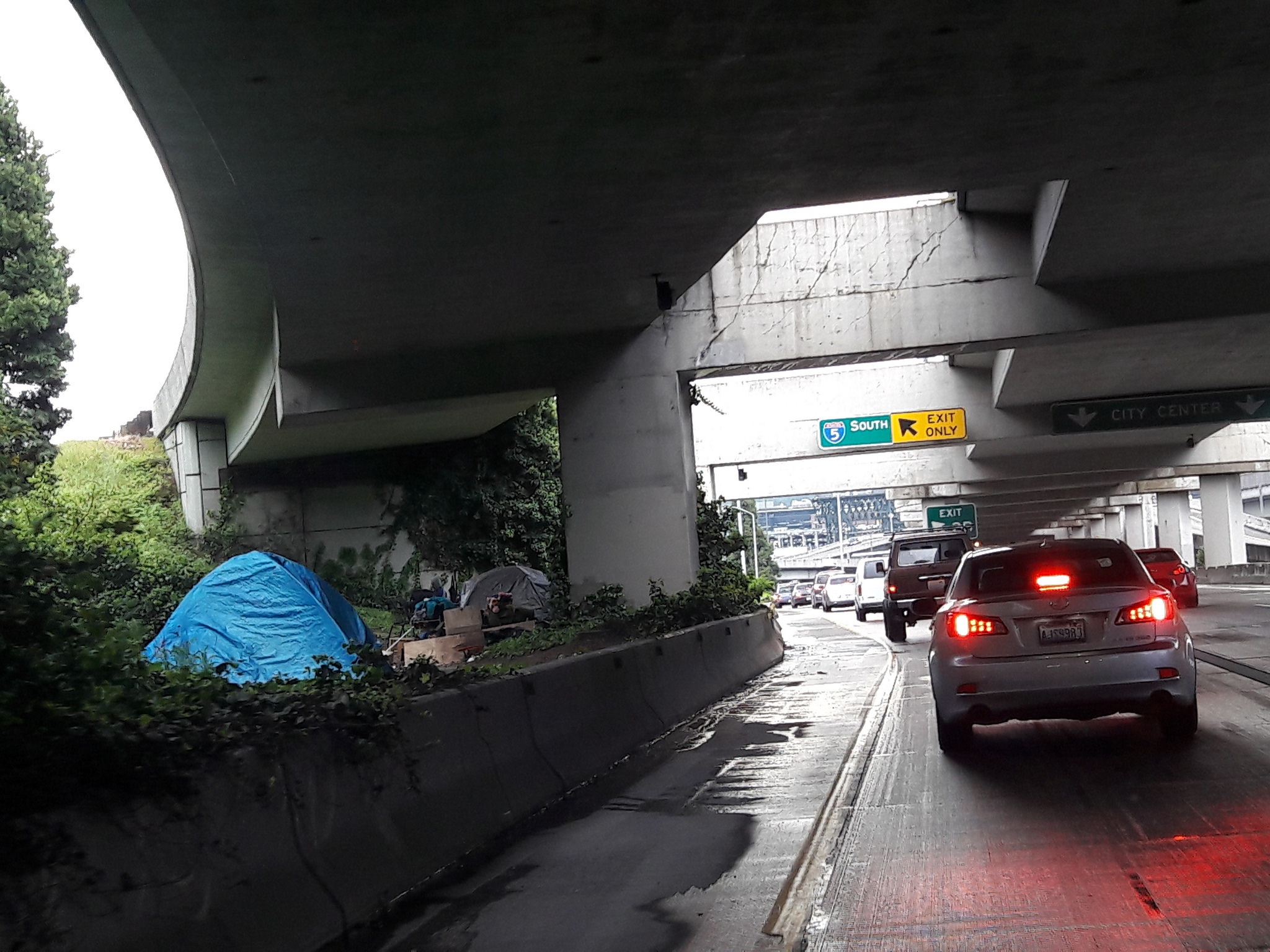 Tents pitched by I-5 in Seattle in May 2017. (Photo by Wonderlane/Flickr)

2017 was a cold year to die on the streets, the coldest in Seattle in 32 years. And as the King County Medical Examiner received a body of someone without a home nearly every other day — 169 in total, a 20 percent increase from 2016 — the pressure on City Hall continued to mount, as it has every year the homelessness crisis has worsened.

The numbers came out this week just as the City Council returns to a proposal they rejected in November: whether and how much to tax businesses to fund the city’s response to the homelessness and housing crises.

It’s a staggering proposal that vastly overshadows a failed effort several months ago to raise $25 million per year for addressing homelessness. And it would more than triple the city’s current annual budget of $63 million for homelessness, bringing the total funding to some $213 million. 80 percent of those dollars would go toward building new housing. Yet the investment is still described by some, including members of the task force, as a “down payment” on what the city needs to wrap its arms around the disheartening lack of progress.

The council is under no obligation to accept the recommendations. But when the first proposal failed 5-4 in November, the promise the council made to the jeering crowds that turned out nearly every day in support of the tax — occasionally shouting out the number of homeless deaths — was they would revisit some new source of funding in early 2018.

Now that time is here and the pressure to find new dollars has only grown.

The November fight was exceedingly tense, turning the largely consensus driven council against one-another in the days leading up to the tax’s narrow downfall. The Seattle Metropolitan Chamber of Commerce fought for and celebrated its failure, warning members to be vigilant in the event the proposal returns.

Since then, City Hall has changed. There’s a new mayor, Jenny Durkan. There’s also a new citywide council member, Teresa Mosqueda, who replaces one of the two sponsors of the original bill, Kirsten Harris-Talley. But has there been enough change that the once-failed tax may succeed — at a markedly higher size?

Although the final product will surely look different than what the task force recommended, it does already seem better positioned to pass than its smaller predecessor. Councilmember González was a key no vote in November, teasing the possibility of support before turning against it in the end.

“I had concerns about what felt to be a very rushed process for developing the policy proposal,” she said of her thinking at the time. “I also heard from people within the service-provider world about intended use of those revenues. There was not a clear enough strategy.”

But now González has taken the lead on its resuscitation, cochairing the task force and whipping her colleagues on the body to get to “yes.” “I actually don’t think this is déjà vu at all because last time we didn’t have any process,” she said. “I think the difference this time around — although the policy outcome is rooted in a [business tax] — is the process that the council agreed on for the public to engage in the policy decision.” That process, she hopes, will end in a more solid sense of where the money would go, including to adding more housing.

The newest proposal also maintains support from the council member in position 8: Mosqueda, like her predecessor, supports a tax. “This is a humane, proactive, progressive approach,” she said, adding, “I think we need to get as much revenue into the coffers in the most progressive way possible.”

The precise structure of the new revenue stream is still undecided. A per employee, per hour tax on businesses is likely to anchor the new funds. Up for debate is the size of the businesses subject to the tax and whether it should be levied at a flat rate or based on a percentage of total payroll.

The task force also called for finding other sources of funding, like a tax on executive pay, vacant real estate, or real estate transactions, some of which would need approval from Olympia.

As before, the chamber is opposed, boycotting the task force from the start, convinced the end result was pre-ordained.

“Before pursuing another new source of revenue, the City must take a hard look at where the $63 million already being spent on human services goes,” the Chamber said in a statement.

But the Chamber’s boycott may mean its voice in the upcoming debate is lessened. When asked about the organization’s opposition, Mosqueda said, “It’s important to show up. And I think it’s important to be at the table.”

González, who was endorsed by the Chamber last year, also seemed reconciled with any ire supporting the tax may bring. “I don’t think that there is a version of a new tax that the Chamber is ever going to agree to and I’ve come to terms with that reality,” she said, adding, “But I’ve continued to have conversations with them.”

If there is new life to a large tax on business, consensus on its details may be complicated. González expressed hope that the final vote is a unanimous one, saying there’s “a lot on the line” for both businesses and people on the streets. Getting to unanimity would mean folding in other council members who have historically opposed the employee tax, namely Sally Bagshaw and Bruce Harrell.

However, she said, achieving consensus is not necessarily a prerequisite for how she casts her final vote. In light of the most recent numbers from the medical examiner, González wants to act quickly. "We often find ourselves in a position where we want to study everything ad nauseam. It has become more clear to me that we need to be allocating funds. ... We have to be willing to make hard decisions."