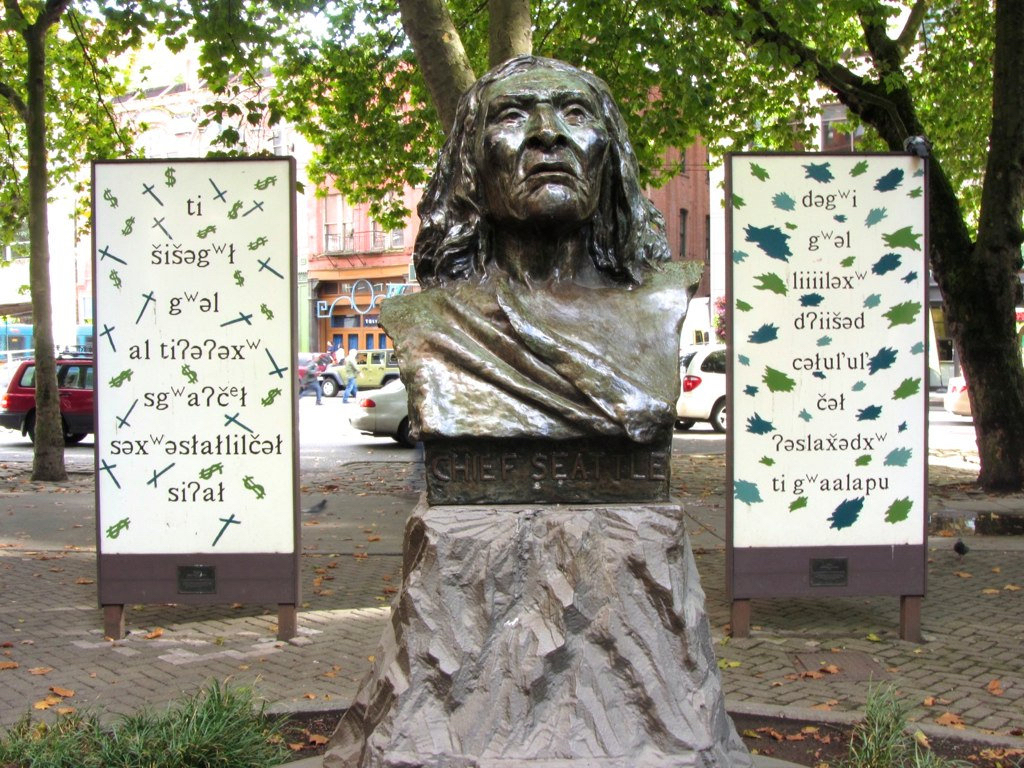 Chief Seattle is memorialized by this bust in Pioneer Square. (Photo by Richie Diesterheft/Flickr)

One evening in 2016, I was at a Ghosts of Seattle Past event near Pioneer Square, where people talked about aspects of Seattle that are significant but vanishing. One of the speakers was Ken Workman, a member of the Duwamish Tribe. Workman is the great-great-great-great-grandson of Chief Seattle, our city’s namesake.

The meeting was in the National Building on Western Avenue, a renovated brick warehouse supported by large old-growth wooden beams. Workman told us that his people, the Duwamish, buried their dead in trees. “We are in the trees, in the beams,” he said, gesturing at the ceiling overhead.

In an 1854 speech given at a meeting between local tribal leaders and Washington’s first territorial governor in what is now Pioneer Square, Chief Seattle of the Duwamish and Suquamish reportedly talked about the displacement of his people by the tide of white settlers flowing in, and the power of the dead to bear witness: “At night, when the streets of your cities and villages shall be silent, and you think them deserted, they will throng with the returning hosts that once filled and still love this beautiful land. The white man will never be alone. Let him be just and deal kindly with my people, for the dead are not altogether powerless.”

I sat listening to Workman with goose bumps, for he had explained that his people were part of the physical fabric of Seattle. It hit me that the dead are indeed with us.

Someone who has taken a huge step toward giving the dead a voice and recognizing the essential connections between our city building and native roots is Seattle historian David Buerge, who has written the first in-depth biography of Chief Seattle, a book that is more than 100 years overdue.

Buerge, a local historian and history teacher, took on the book as a challenge two decades ago. I’m glad he did. Back in the ’70s, I went to the Seattle Public Library and asked for a biography of Chief Seattle and was shocked to find that the only book that existed was written for young people. No bio for adults existed. When I asked why, I was told that not enough was known about him to make a full biography.

Buerge has proven that wrong. But it took him more than 20 years to dig out the facts, and a lifetime of study to gain the perspective to know how to make sense of the chief’s time and context. In Chief Seattle and the Town That Took His Name” (Sasquatch Books, 2017), Buerge taps sources ranging from tribal oral history to early notes and documents of fur traders and settlers. While aspects of Chief Seattle’s early life remain hazy — there is even disagreement over how to pronounce his name — much is actually documented.

What we see is a man in full: smart, strong, tough, complex. He was a leader, a warrior, a businessman and a father. But he was also a man attempting to survive during a calamity: the near annihilation of his people by disease, war, murder, displacement and neglect. As a boy, Seattle saw the sails of the region’s first European visitor — George Vancouver and his expedition sent to map Puget Sound for Great Britain in 1792 — and he grew up in a world that began to unravel from that point on.

Buerge tells us what the region was like before European contact with the area’s Salish peoples, and how contact changed everything. Early waves of disease, such as smallpox and malaria, wiped out a third of the population, and later, many more. International trade for furs skewed tribal priorities and powers, as did trade in guns. Western civilization’s arrival in the Northwest was disruptive, to say the least. Social orders established for thousands of years struggled with new realities.

One of the revelations for me is the active role Chief Seattle played in the creation of the city itself. He is often portrayed as a friendly Native American who helped the first white settlers make it through rough winter and lean times, an echo of the story of the Pilgrims at Plymouth Rock. Here, it was the Denny party at Alki Point.

But the Dennys didn’t just show up: They were invited. In fact, Chief Seattle, whose tribal turf included Elliott Bay, had set up a virtual real estate office in Olympia to lure white settlers to areas near the Duwamish River, Lake Washington, Elliott Bay and other places in hopes of getting them to settle and start businesses and trade. He was like a venture capitalist seeding their startups, providing workers for timber cutting and the sawmills. He helped set up a fish-processing operation at the mouth of the Duwamish River (it failed). He gave entrepreneurs land. He encouraged the intermarriage of male settlers with native women, as was the custom for securing peaceful and prosperous relations.

It’s safe to say that much of the original vision for the city of Seattle was one that blended races and cultures. Chief Seattle, in Buerge’s book, is not just a namesake or symbolic figure, but the city’s founder.

Chief Seattle has been rendered in noble statues and logos; the city was named for him, though he did not want that honor. His active foundational role has been portrayed as stoic, not active. The true man has been swept aside as a symbol.

And “swept aside” literally.

In one painful scene, Buerge recounts the story of a 10-year-old white girl running down a plank, meeting the elderly chief and demanding that he step aside for her. When he did not, she pushed him ignominiously into a pile of sawdust and ran on. “Her wretched act, I surmise, acted out the antipathy many adult whites felt toward Indians,” Buerge writes. The level of that antipathy has also been swept under the rug, historically speaking.

Buerge’s book, beautifully written and rich with detail, reaches out to the dead to make things right. It pulls Chief Seattle out of the sawdust and gives him his due.

This book also demonstrates that the dead are not powerless, and that good history demands that we listen to what they have to say.

This column originally appeared in the January issue of Seattle Magazine.