As city grapples with homelessness, leader tasked with response resigns 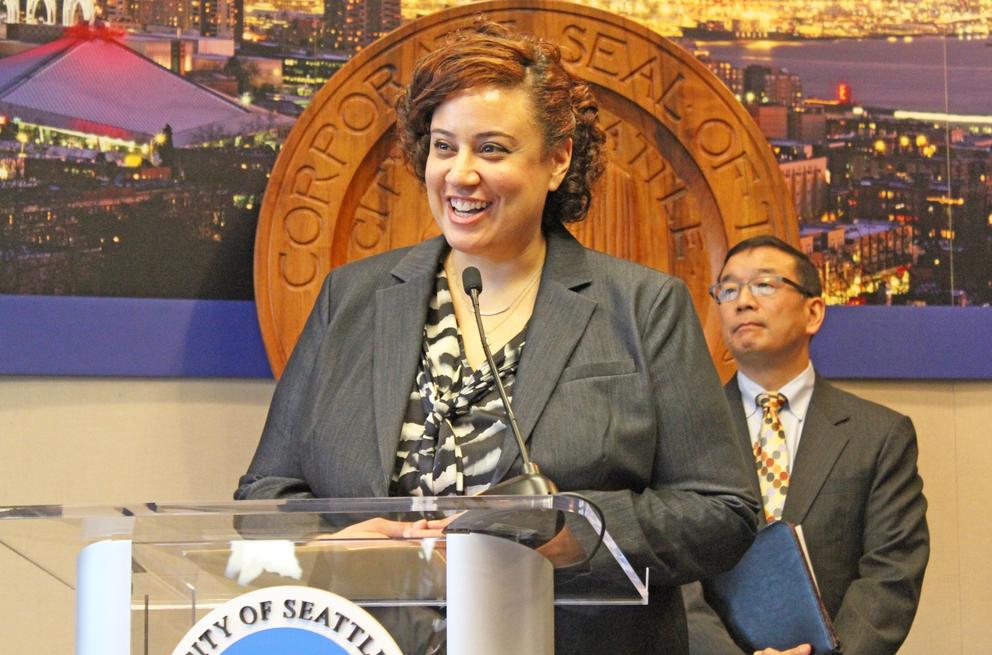 As the homelessness crisis worsens on the streets of Seattle, the city is about to see a major shakeup in who’s leading the response. In a surprise Friday, head of the Human Services Department, Catherine Lester, announced her resignation just three months after Mayor Jenny Durkan asked her to stay on.

In an email to employees, Lester said she tendered her resignation to be closer to her parents in Toronto, Canada. “As many of you know, my family is very important to me,” she wrote. She added, “This was not an easy decision for me to make.”

In her place, Deputy Director Jason Johnson will serve as the interim director.

Durkan said in a statement that she would wait for the May recommendations from a relatively new regional homelessness task force, One Table, before proceeding with the search for a permanent replacement.

Durkan praised Lester. “Catherine’s tenacity and laser-like focus on results have helped victims of domestic violence, Seattle’s youth, vulnerable seniors, and tens of thousands of people experiencing homelessness – her leadership and compassion will be missed,” she said.

Lester’s departure, nevertheless, comes at a precarious time in city government. As housing prices soar, the number of people struggling with homelessness continues to rise, topping 11,643 in King County’s 2017 point-in-time count. In a recent report, the King County Medical Examiner documented 169 deaths of people believed to be homeless, a 20 percent increase from the year before. The city and county’s homelessness state of emergency has now been in effect for nearly 2.5 years.

The reality of the worsening homelessness problem has put enormous pressure on city officials to make inroads, which has led to fierce disagreement about the best path forward at times. Under Lester, the city increased homelessness funding to $64 million a year and made an aggressive pledge to double the number of people placed into housing to more than 7,000.

Lester was also the standard bearer for Pathways Home, a plan first laid out by former Mayor Ed Murray to prioritize placements in permanent housing above all other metrics. Built on the recommendations of an expensive outside consultant, the plan meant providers who couldn't prove they were exiting people out of homelessness were slated to lose funding earlier this year. The Seattle City Council restored $1 million last month, but providers are still at risk of being cut off.

Skeptics of the plan have doubted such goals could be achieved without a dramatic increase in new housing. Pathways Home favors so-called “rapid re-housing,” which places people in private-market housing with rental vouchers. This partnership with profit-driven landlords has some people worried about its long-term viability as housing prices rise.

The debate is far from settled, and it's unlikely Lester’s departure will spur dramatic change in the near term. Johnson, along with Durkan, has echoed Lester's commitment to the new plan.

Additionally, the Seattle City Council has just begun debate on what will be a highly contentious issue: Whether and how much to tax businesses to help fund the construction of new housing. The current recommendation calls for a $150 million a year increase in revenue.

Now, in addition to solving the homelessness crisis, city officials must find a new person to take the reins.

Lester’s departure closes yet another chapter from the Murray administration. Durkan was aggressive in her shakeups as she settled into the mayor’s office, accepting resignations from heads of the departments of City Light, Transportation, Civil Rights, Economic Development, Labor Standards and Parks and Recreation. She also surprised city staff by accepting resignations from the director of the Department of Human Resources, Susan Coskey, a longtime personal friend, as well as the head of the Information Technology department, Michael Mattmiller, whose husband helped on her campaign.

Meanwhile, head of the Department of Neighborhoods, Kathy Nyland, remains in limbo.

But despite Durkan’s aggressive housecleaning, she nevertheless asked for Lester to continue on. In her email to employees, Lester said she would help transition control of the department. Her final day will be May 1.

Could Seattle become like Vienna and house everyone affordably?