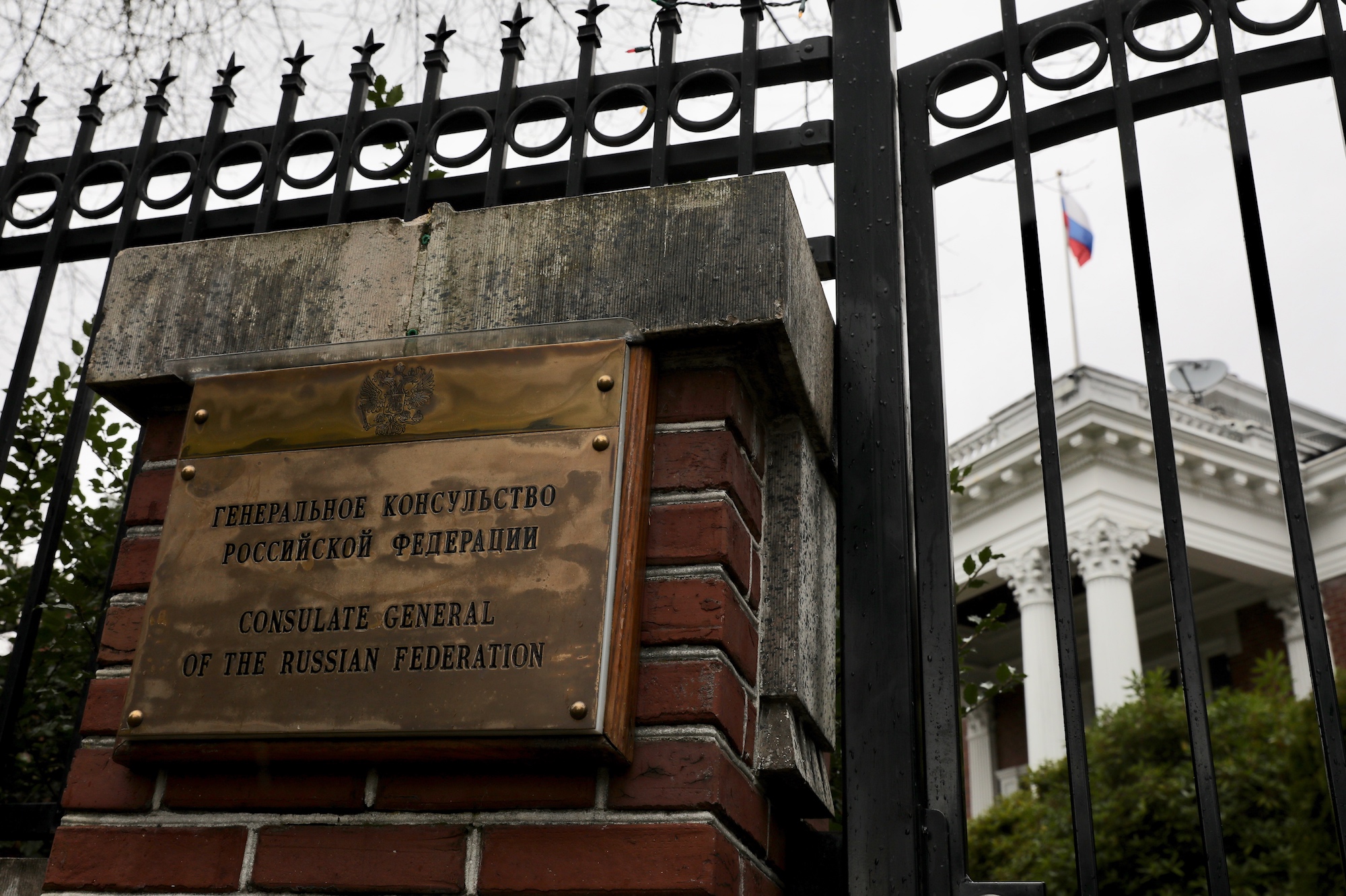 When the Russian Consulate in Seattle opened in the early 1990s, it was a gesture of goodwill at a period when relations between the U.S. and Russia were thawing. It unfolded in concert with the establishment of an American Consulate in Vladivostok, on the far eastern edge of Russia.

The two Pacific Rim port cities had been largely closed off to diplomacy between the two countries, thanks in part to their proximity to sensitive landmarks, such as the Bangor Naval Base on the Kitsap Peninsula, said Carol Vipperman, who helped get the Seattle consulate off the ground.

“It was a major effort to demonstrate that the two countries were looking to build cooperation, particularly between businesses and people on the Pacific Rim,” said Vipperman, who was then the president of the Foundation for Russian American Economic Cooperation. She’s now part of the Henry M. Jackson Foundation, which has devoted significant efforts to human rights and supporting Russian studies at the University of Washington.

Now, with the closure of the consulate in Seattle ordered by the Trump administration, Vipperman fears the Vladivostok consulate will soon follow.

Derek Norberg, president of the Council for U.S.-Russia Relations in Seattle, has the same fear, frantically calling his contacts in Russia on Monday morning in hopes of preventing retaliation against the Vladivostok consulate. In terms of promoting ties between the two countries, he said, “The idea that we’re losing all the consulates in all of those geographies could be a real problem.” San Francisco’s Russian consulate was closed a year ago.

The Trump administration’s announcement Monday that it was closing the consulate, in addition to expelling 60 Russian diplomats, comes as a reaction to the poisoning of a former spy, Sergei Skripal, and his daughter Yulia on English soil.

The Trump administration said the consulate in Seattle was pegged for closure due to its proximity to Bangor as well as to Boeing. Norberg, for his part, said he would be surprised if the level of snooping at Seattle’s consulate was anything extraordinary, although the Washington Post reported Monday that “senior administration officials” believed Seattle’s consulate to be a key outpost in Russian intelligence operations.

One big local question mark is the Samuel Hyde mansion, where Russian Consul General Andrey K. Yushmanov lives, off E. Madison Street near the gated community of Broadmoor. Property records indicate the Russian Consulate is paying taxes on the property. The Capitol Hill Blog reported Monday the U.S. State Department has given diplomats until April 24 to vacate the premises.

While the closure in Seattle may have been a response to cross-border poisonings, in Downtown Seattle it was ruining the day for people like Farida. Russian officials were ordered to shut the downtown office by April 2, but its doors were shuttered Monday morning.

Farida, who declined to provide her last name, holds dual American and Russian citizenship. She traveled to Seattle from Boise to renew her expiring passport so she could fly to visit her brother, who lives in Russia. She’d arrived here Sunday, woke up early and made her way to the One Union Building. But when she took the elevator to the consulate on the 25th floor, officials told her: “Zakryt.” Closed.

She was frustrated, unsure why she was being turned away. She had not heard the news.

Farida was one of a steady stream of Russians living in the United States confused by the situation at hand. Andre Ulyanovich, like Farida, had flown in, from Sacramento in his case, to renew his Russian passport. One woman, walking with her family, said she would now have to fly to Houston, at a cost of $1,500, to rush the renewal of her passport so she could visit family back in Russia.

One man, who declined to give his name, has been visiting his son, who lives here. He learned of the closure while on the bus to the consulate. The bureaucratic fighting between the two countries, said the frustrated man, is “worse than it needs to be.”

From a practical standpoint, the West Coast has now lost all of its bureaucratic touchpoints for Russians living in the United States or Americans traveling to Russia. Voting, passports, notaries: those resources have vanished for the 88,000 Russians in Washington and the many thousands more along the coast and the Rocky Mountain West. Houston is now the nearest consulate.

Lara Iglitzen, executive director of the Jackson Foundation and expert on U.S-Russia relations, noted the dissolution of the consulate could particularly hurt elderly Russians living in the U.S. who rely on pensions and interact with the government often.

Travelers apparently can still get a Russian visa in Seattle: In the last 10 years, consulates have largely outsourced visa services to private organizations. The Invisa Logistics Services office near Pike Place Market remained open Monday and an employee inside, passports lined up behind her, said they were still processing applications. The consulate’s closure likely means they will need to send the applications to the embassy in the District of Columbia, rather than down the street to the consulate.

But for those invested in relations between the two countries, the significance of the closure is more general. Vipperman said she’s well aware of the issues between the two countries, but that doesn’t mean she’s celebrating the consulate’s closure. “There’s a sense of, when you have a representative here from a country and you’re interested in continuing relationships, it’s very helpful to have someone here,” she said.

Norberg echoed the message he delivered when the San Francisco consulate was shuttered. “The further degrading of diplomatic missions as a tool of influence,” he said, “is a bad path to go down and we seem to be continuing down that path, which I think is a real mistake.”

Among local politicians opposed to the Trump administration, several, including Seattle Mayor Jenny Durkan and Democratic U.S. Reps. Pramila Jayapal and Adam Smith, hit Trump for his initial delay in responding to the poisonings in Britain. Smith, the highest ranking Democratic member of the House Armed Services, didn’t comment directly on the consulate’s closure but said, “It is appropriate that President Trump has expelled Russian diplomats.”