The 2015 family dramedy "Hir," written by MacArthur 'genius' Taylor Mac, tells the story the story of a family coming to terms with different kinds of trauma. The ArtsWest/Intiman co-production runs Feb. 28-March 25. 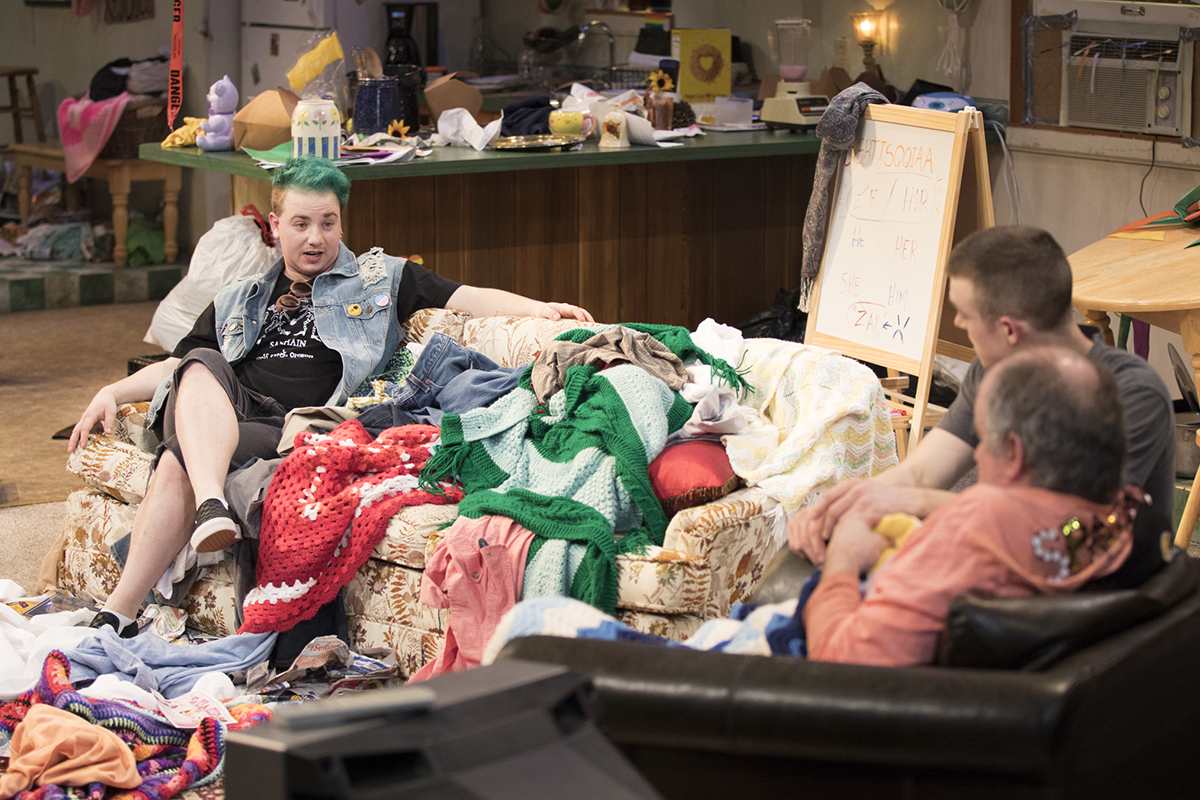 Adrian Kljucec, who plays the character Max, sits on the set of "Hir." (Photo by John McLellan)

A theatrical production opening up this week at ArtsWest Playhouse takes the concept of the American Dream and spins it on its head. “Hir,” a 2015 family dramedy written by award-winning theater artist Taylor Mac, tells the story of a family coming to terms with different kinds of trauma. Isaac, a Marine, comes home from war to find that his family has changed and that his sibling Maxine is transitioning to Max.

“The American drama isn’t just about straight, cis, Protestant families who struggle with banal problems,” says Eddie DeHais, a non-binary director who helped advise the creative team with this production. “America is a lot weirder than we put on our stages.”

DeHais, a Seattle writer/choreographer/visual artist who uses the they/them pronoun is the dramaturg for the production. In that role, they researches to make sure every aspect of the play is accurate and that there is cultural sensitivity.

Crosscut spoke with DeHais about their personal connection to "Hir" (pronounced "here"), the term “non-binary” and how art can disrupt the mainstream’s notion of what is meant by the American dream.

Why did ArtsWest (in a co-production with Intiman) choose to produce this show?

Jennifer Zeyl, who is Intiman’s artistic director has been wanting to produce a Taylor Mac show for a long time. I think that “Hir” is such a fascinating play because, as Taylor has said, it's not a play about gender, which I actually agree with. It's a play in which gender is part of the discussion. It's a play about people being caught in the boundaries of their own identity and their own trauma.

It's four people. They are the stereotypical nuclear family in some capacity: mom, dad, a son and a daughter. The father commits acts of violence against his wife, his son and then Max, who was assigned female at birth but transitioned into someone who is non-binary. It's just these four people who have all dealt with some kind of trauma in a room together. It happens over the course of 14 hours. Zeyl was really interested in showing the intersection of where all these traumas live.

How does this play prompt us to think about identity and language?

It's only lately that the language has evolved around people who don't identify on either side of the binary, which is one of the reasons why I think this is such an important and valuable play, because that level of nuance for gender is an incredibly important part of so many people's lives that has, up to now, not been part of the conversation.

It really seems as though we need to be more respectful when it comes to asking individuals about their gender.

I think people should just ask for each other’s pronouns. Asking what someone's gender is can actually be really exhausting for the person who is an uncommon gender. Again, this just happened to me yesterday where someone who I just started working with, out of the blue was like, ‘I need to ask you all about your gender.’ And then it was sort of like this interrogation for 25 minutes. And I'm like, ‘This isn't really what I want to do right now.’

And I'm always happy to educate people but I think the thing that I tell people is you need to create space for people to express their genders, but you can't put them in a position where they're going to feel obligated to educate you and to do the emotional labor of that. There are just a lot of great books and resources out there that I'm constantly recommending to people instead of like putting it all on a person and trying to have them explain every aspect of it.

How do you think that we disrupt this notion of the American Dream? Is it through works like this one?

So many people think about a play like this and they think ‘Oh, how experimental, how different, how abnormal,’ but really this play is one of the closer plays I've ever seen to my own experience. I think that Taylor is doing some really interesting work in redefining what an American drama looks like. This play is actually not really that far away from a lot of people's reality. I think a lot of people are going to go see this play and they're going to see a reflection of their own family more so than they would if they went to see a traditional play.

How has working on this play impacted you?

I've always been out to certain people in certain circles of my life but it's only in the past two years that I fully came out as like ‘Hey, I'm like gender queer. I'm non-binary. I'm trans.’ It's only in the past few months that I've come out to my family.

You see Max doing this over and over again in the play, where "hir" (the preferred gender pronoun of Max) feels the need to have all of the answers to the political and historical context around transgender politics. In a way, I think it’s a defense mechanism to people saying, “Well you're making it up,’ which is a huge fear that I definitely encountered and one of the reasons it took me so long to come out. I was so afraid of being told ‘This is just a phase. You're just making a scene. You're just trying to get attention.’

Max has this great line where they say, ‘Hirstory is not new. I'm not the new. I'm old.’ Just like everyone here… I don't want to be new. There is no new. How can you become new in a form that's so old its experimentation is a craft? People keep trying to tell Max, ‘Well you're breaking our paradigm and you're changing things.’ I think that Max just wants to be who hir is and the other characters, Isaac and Paige, are constantly imposing their ideas about that upon Max and in many ways, Max has to discover who hir is on hir own terms.

In a recent interview, Hir’s assistant director Hatlo explained how the play is actually about ‘the sunset of masculinity.' What does that mean?

I love that phrase: ‘the sunset of masculinity.’ I do think when I say this play isn't about gender, what I mean is that it's not about transgender people. I actually think that it's much more about masculinity and what it means to be a man. These broken notions that we have in our society about how men are supposed to behave as caretakers, and as people who are not allowed to have emotions openly, as people who feel entitled to take up space, this play questions that status quo and turns it on its head.

Both Isaac and Max are young and learning who they want to be in this play. They are fighting against these notions of what it means to be a man.

You’re a member of the production’s Cultural Advisory Council. How did it inform the play?

Each person on the cultural advisory committee has their own specialty. I've really been coming from the lens of understanding gender and I've sort of been the person who is taking other people's feedback and seeing what's valuable and passing it along.

Dramaturgy is the research that you do when you go into a play to say: OK, is this clothing accurate? Is the set accurate? How would people speak? Maybe they have an accent? What are the words that people use? To take it a step further by actually having people in the room whose lived experience matches the experiences of the characters is really great.

For people who can’t wrap their head around what it means to be ‘non-binary’ – people like my mom. Would she like this play?

I think it's a great play for people of all kinds. I actually love the script specifically because, within the script, it educates. Max as a character is educating hir brother on what the gender binary is and how transgender people have lived in society. It shouldn't be that you only learn what gender identity is if you happen to meet a trans person. That's the dynamic we have to shift. Everyone should know this. Everyone should know what non-binary is whether you know a trans person or not, whether you know a non-binary person or not. I think that ‘Hir’ is a really entryway into that.

What about those people who consider themselves educated on these issues? What can they expect?

I think it's a really dynamic and complex play. It's also funny. It's really funny. It's twisted and weird and it's for people who are in crisis.

What do you want the audience to come away with after seeing the play?

I'm hoping that people walk away having conversations with one another. I think the most important thing to me is that people leave and they are able to talk to one another about their experience. I think that good theater should always do that and hopefully, we've given people the tools to walk away and go 'Wow, I thought Max was like this or I thought Paige was like this.’ People can actually talk to one another and have a real dialogue, disagree and change each other's points of view.