You too can move to a nice urban neighborhood — in a suburb. 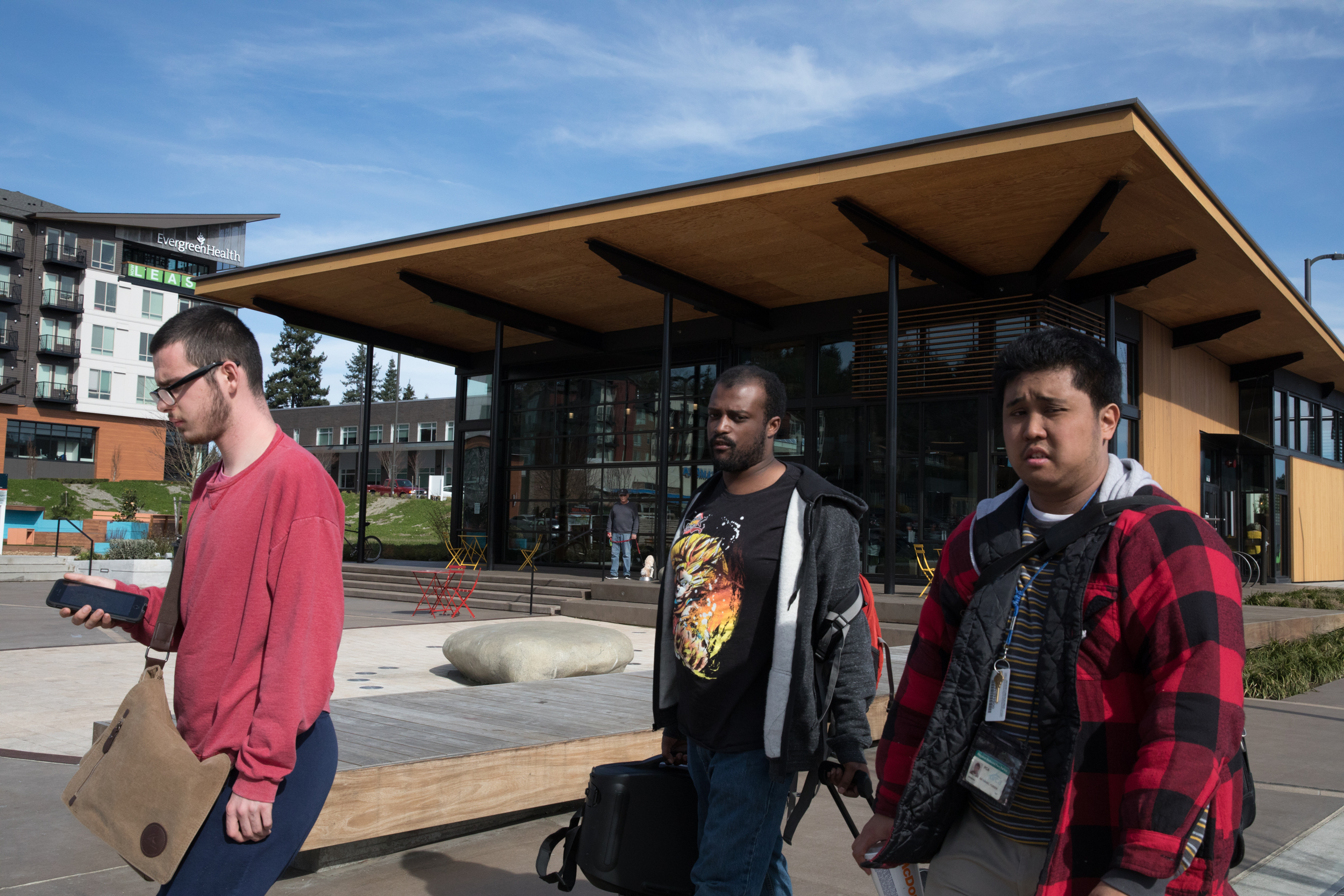 Pedestrians walk past The Hangar in Kenmore, Mar. 12, 2018. (Photo by Matt M. McKnight/Crosscut)

State Route 522 slows down slightly as it skims around the north end of Lake Washington. If you’ve been there, you’ll probably remember some strip malls and garden apartments. Well, look again.

You might catch the soaring roof of a modern multifamily housing project from the corner of your eye. It’s worth a look, but you’ll have to turn off the highway and go a couple of blocks north on 68th Avenue Northeast.

Downtown Kenmore beckons. There really is a there there. Two proudly modern civic buildings, a city hall and library, have convened around the block. Now there’s a six-story apartment building, and it’s not an accident of the market. It’s the result of almost two decades of planning and civic will — plus great market timing.

The Hangar is brand new this fall. None of Kenmore Air’s floatplanes, now shown in the Kenmore city logo, can actually park there, but this community center is ready for almost anything else. Lofty and shed-roofed, it’s got a garage-style retracting wall that opens up the big indoor space to an outdoor plaza. There’s something for everyone: Lots of space for kids, including game cubbyholes and a café run by city-selected Diva Espresso, which also serves beer and wine in the evening. There’s a three-way fireplace with movable tables all around.

The expansive plaza in front of the Hangar has big rocks to climb and sit on. There are movable tables and chairs and a programmable water feature. It’s not just for warm summer weather. Those rocks? They’re heated. There’s even an elegant scoop bag dispenser for conscientious dog owners.

And that pretty much tells you who’s moving into the nearby apartment building, LINQ Lofts + Flats has leased fast, and there are definitely more dogs than kids living there, according to developer Eric Campbell. 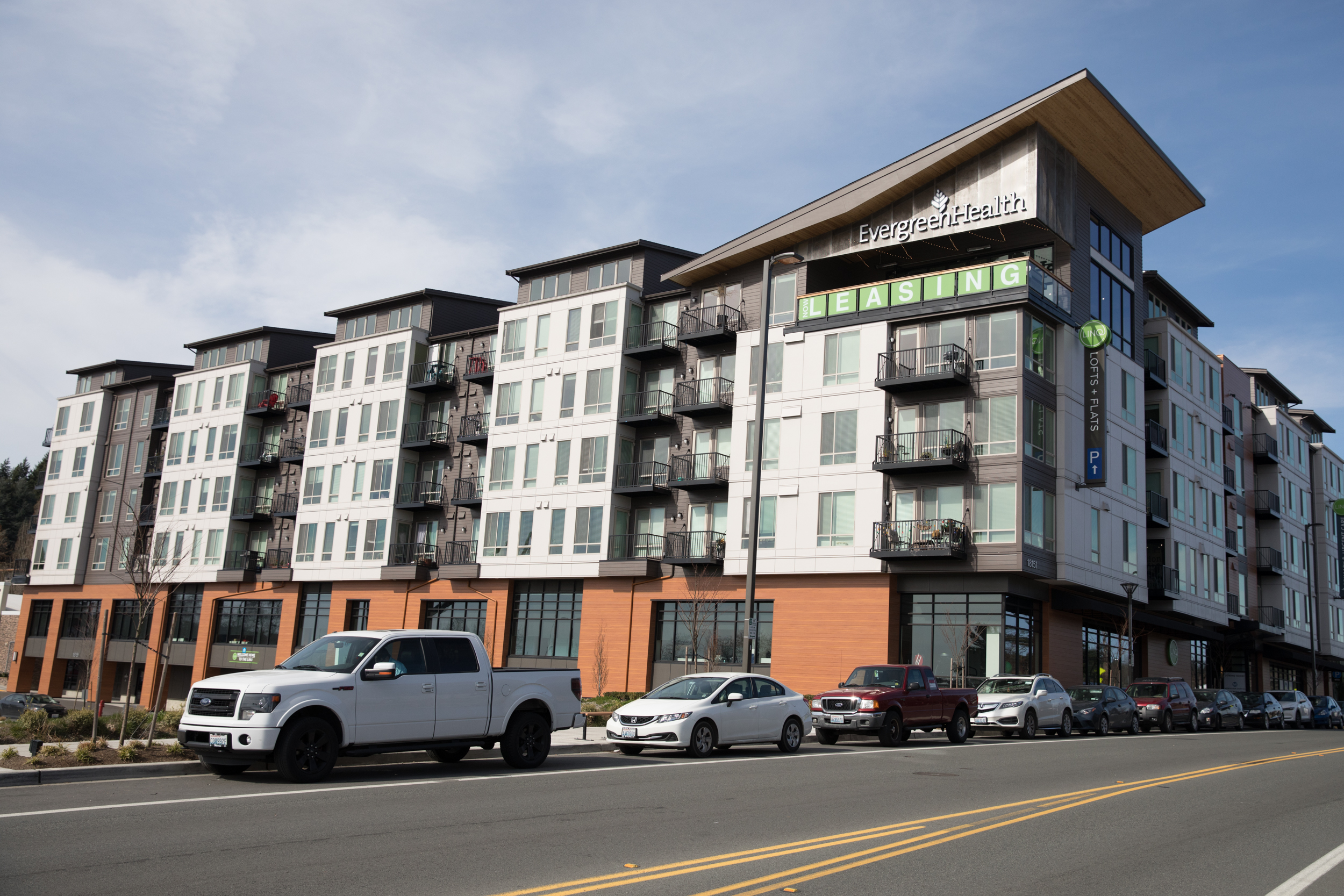 Kenmore has grown by almost 500 people with the new housing — and jobs may not be not far behind, according to city manager Rob Karlinsey. He takes pride in the number of startups founded by people who have split off from the area’s tech industry giants. He points to Kenmore’s advantageous position, almost equidistant from Redmond and Seattle, for two-commuter couples. The city’s mature business community is there to mentor new enterprises. Kenmore’s even got its own business incubator, located in a warehouse-like structure along SR 522.

These developments suggest that the best way of living in an urban neighborhood is not inside the city at all, but in a suburb. It might not be a bad thing to work and sleep in Kenmore — away from the cranes, the crowds and the skyrocketing price to live in downtown Seattle.

Generously sized one-bedroom apartments are priced about 20 percent lower than some smaller ones in South Lake Union, according to LINQ developer Campbell, an Eastsider who grew up near Bellevue Square and now lives in Kirkland.

The same might be said of other cities on the Eastside. But Kenmore might want you more.

It’s “aspirational,” according to assistant city manager Nancy Ousley. Long-time residents in Kenmore, the kind that show up at meetings, are betting that newcomers might like walking to the store or the library or a meeting at the community center, and they are willing to accept apartments close by in the bargain.

Shortly after incorporating in 1998, the new city government leased an empty drive-up bank in a tired old shopping center near the corner of 68th Avenue Northeast and Northeast 181st  Street, right next to the old Wigwam store. It was just a temporary home before a real city hall could be built, but Kenmore began assembling land and working with the local community to come up with a plan for a civic center. The Wigwam store closed. Kenmore Camera expanded and then moved to the block.

There are stories about callers to Kenmore City Hall that asked about fixing their appliances. But thank goodness Kenmore never changed its name to something with “lake” or “forest” or “pointe” in it. Instead, it’s keeping pace with its namesake floatplanes (Kenmore Air) and cameras (Kenmore Camera).

It’s getting the best of both worlds: a modern edge and a civic center. It’s got a growing grid of sidewalks and buried utilities. It’s got architecture, too.

Right across 68th Avenue Northeast from LINQ is Kenmore City Hall, built in 2010 and celebrated for its super-green features and bold esthetic. Around the corner on Northeast 181st Street, award-winning Kenmore Library, also designed by Weinstein AU Architects, came online the next year in 2011.

Anchoring it all is the Hangar. Designed by a team that includes Hewitt and Graham/Baba Architects, Kenmore is getting some civic architecture, and settling into a nice mid-century modern esthetic, with shed rooflines, open structures, sturdy decks and modern plazas.

That esthetic will continue with two buildings being developed in the next two years — a mixed-use commercial, office and apartment structure and a one-story structure with a restaurant tenant right across from the plaza and Hangar front.

Kenmore is still working on creating a convenient crossing for the highway, one that would connect its growing civic heart with the lakeshore and parklands, the Burke Gilman Trail and even the home of Kenmore Air, which is still on the water. Then the City of Kenmore should really take off.