City employees' discrimination lawsuit raises larger question: Can juries be biased and not know it? 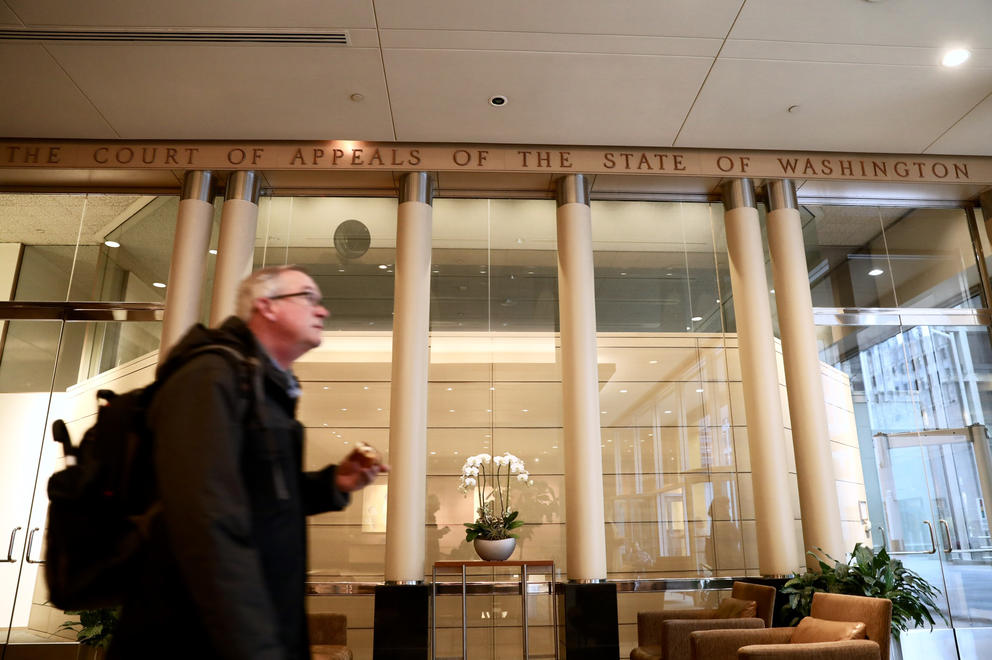 A man walks past the Washington Court of Appeals department inside the One Union Square building in Seattle. (Photo by Matt M. McKnight/Crosscut)

Last week, a panel of judges heard an unusual argument on behalf of seven former City of Seattle employees: their lawsuit alleging racial discrimination deserved a re-trial because a previous jury was not aware of its own implicit bias.

The appeal comes amid a concerted effort by courts in King County and throughout the state to better address issues of implicit bias — stereotypes and preconceived notions developed unconsciously — among jurors.

In February 2015, seven female employees sued Seattle Public Utilities and four of their bosses after two were fired and two received suspensions. They claimed their punishment was an act of racial discrimination: six former staffers are African-American and one is Filipina, according to the lawsuit. (Three of the women retired.)

When the case went to trial in 2016 in King County Superior Court, following unsuccessful settlement negotiations, a jury ruled in favor of the city, agreeing with SPU’s lawyers that the employees were let go for cause — not because of race.

In the original suit, the city argued the women were found troubleshooting their own utility accounts. The women do not deny doing that but they say at the time there were no clear policies on the matter. SPU used the women as scapegoats for their own failings, the suit claimed.

The employees are now asking the state court of appeals for a retrial, arguing their attempts to educate the jury on implicit bias were unfairly rejected by the lower court. They also argued the jury pool did not reflect the community’s demographics. The jury pool was 80 percent white, which was 20 percentage points higher than the county’s racial makeup.

“These are fundamental issues about whether you can get a fair trial in Seattle if you are Black,” said Jack Sheridan, who is representing the employees.

In a hearing last Thursday, assistant city attorney Sarah Tilstra argued a different jury regardless of its racial makeup or if it had been briefed on bias, would have ruled in the same way.

“We just don’t think that issue affected the outcome here,” added a spokesperson for the City Attorney’s Office “There were a number of people of color on the jury. . . . There are interesting questions about how you get a better sample of ethnicities on a jury, but the flip side is you can’t really say it’s not representative, they reached a biased conclusion.”

The best analogy for explaining how implicit bias works is to consider what happened when musicians auditioned for a symphony, explained Dr. Anthony Greenwald, a nationally recognized expert on the subject at the University of Washington who is co-founder of Project Implicit. Prior to the 1980s, the top five major orchestras in the U.S. were only 5 percent women. But when conductors began hiding the players behind screens so their gender would not be known, the number of female musicians climbed to 25 percent by the late 1990s.

Greenwald said courts need to find their own methods for stripping subjectivity out of juries, including persistent reminders to focus objectively on evidence, not stereotypes.

When the SPU case went to King County Superior Court, the SPU employees’ attorney wanted Greenwald to testify on implicit bias. The attorney also wanted the judge to remind the jury to “critically evaluate the evidence and resist any urge to reach a verdict influenced by stereotypes, generalizations, or implicit biases.”

The judge declined — a decision that has now become a key part of the employees’ appeal.

Since the initial filing of that case in 2015, Greenwald has begun working with courts — including King County — on how to incorporate implicit bias training with jurors. The U.S. District Court has developed a training video to be shown to jurors. Screening the “Unconscious Bias” video has been standard practice in the court since February 2017.

In recent months, the King County courts have also begun screening an adaptation of that video to jurors. “We’re trying to deliver on the promise of equal justice, helping jurors address their own implicit bias,” said Judge Theresa Doyle, who did not speak directly about the SPU case.

Courts in other parts of the state, including in Pierce County, have also expressed interest in taking a more deliberate approach to addressing bias among jurors.

But this case serves as something of a watermark: The implicit bias training sought and rejected initially is now becoming standard.

A court ruling is not expected for several weeks.