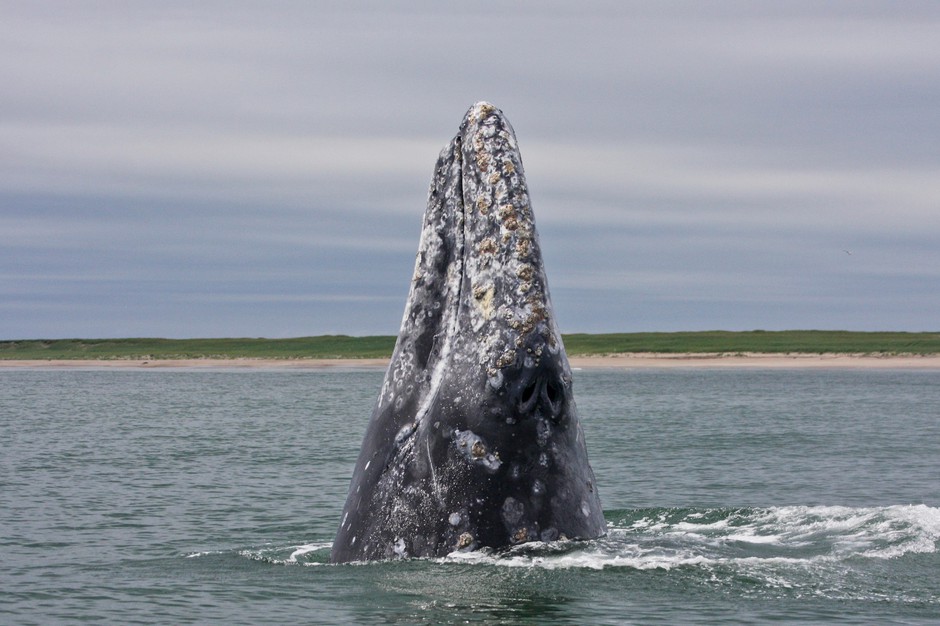 Western gray whale off the northeast coast of Sakhalin Island in the Sea of Okhotsk taken during the 2011 tagging season under the joint effort of A.N. Severtsov Institute of Ecology and Evolution of the Russian Academy of Sciences (IEE RAS) and Oregon State University Marine Mammal Institute in collaboration with the U.S. National Marine Fisheries Service and Kronotsky State Nature Biosphere Reserve. (Photo courtesy of Oregon State University/Flickr)

Gray whale sightings are up on the Oregon and Washington coasts in recent weeks.

Counts at Oregon’s Whale Watching Center at Depoe Bay have been between five and 10 per day, according to the Oregon Department of Fish and Wildlife, although many more pass the along the coast undetected.

Park ranger Luke Parsons says the actual number of whales passing by on their way from Baja to feeding grounds in the Arctic is relatively typical for this time of year.

“What is unusual is how nice the weather has been. And this has led to many people coming out to the coast and being able to see a lot more of these animals than we’re really used to in March,” he said.

But it may not just be the weather.

An American Cetacean Society project in Los Angeles has been tracking the migration for 35 years. Director Alisa Schulman-Janiger says there was a pulse of whales that passed Los Angeles a few weeks back, heading north to feeding grounds in the Arctic.

And that means those whales are passing Oregon and Washington right now.

In addition, Schulman-Janiger says West Coast gray whales experienced a baby boom over the past six years, and the population has increased significantly.

Overall though, it’s difficult to pinpoint exactly what’s happening with gray whales off the West Coast.

Scientists with the National Oceanic and Atmospheric Administration do annual calf counts off California. Other tracking projects rely on citizen scientists and trained volunteers that count the whales from shore.

But the whales don’t always travel near the coast, and often rough oceans and bad weather can make them difficult to spot.

Gray whales are expected to be passing near the Oregon and Washington coast until June. Mothers with calves generally pass later in the spring.

Parsons, the ranger, said he’s also been seeing humpbacks and recently spent a morning tracking a pod of orcas off Oregon’s coast.