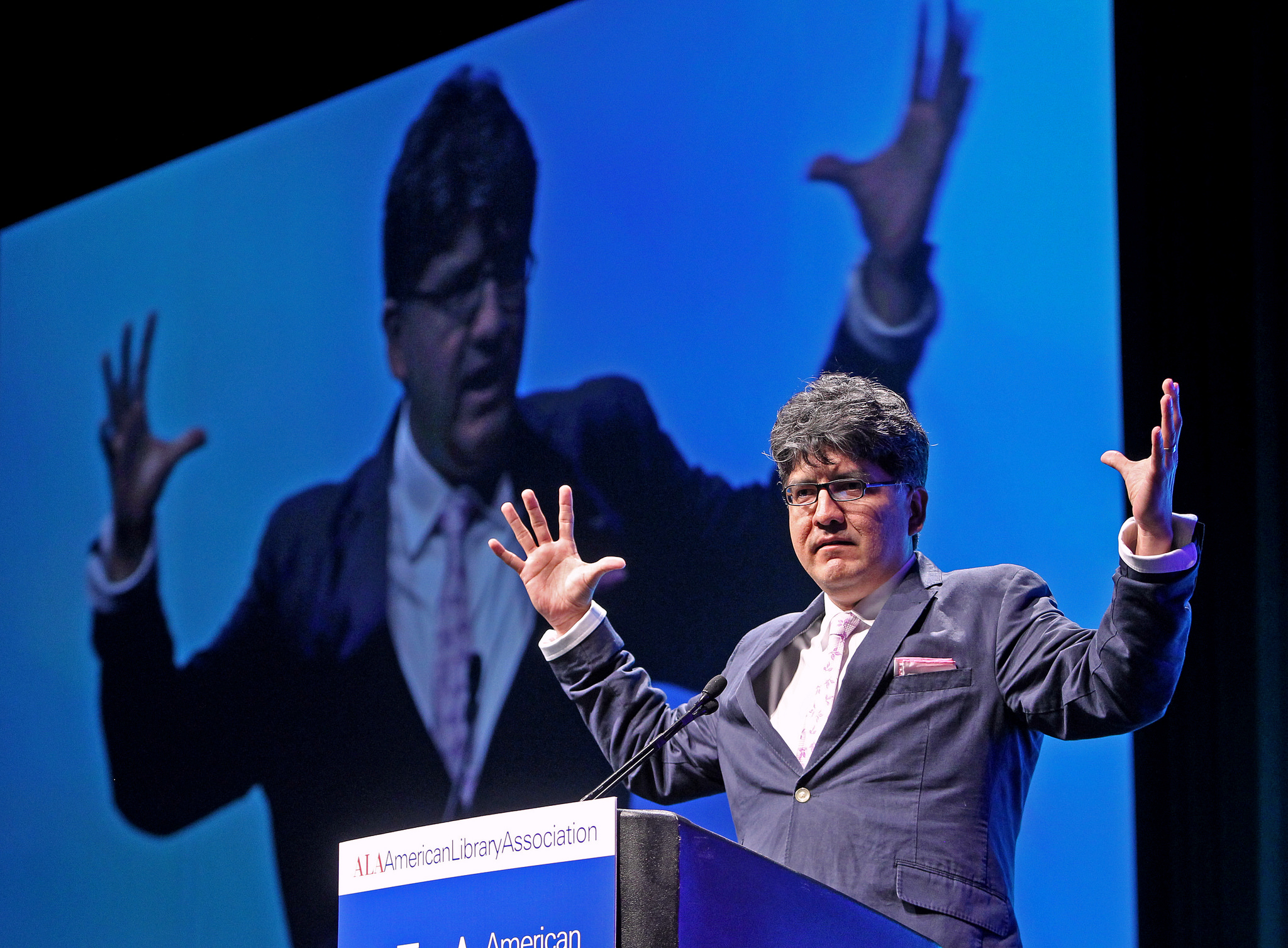 This story was originally published on High Country News. It was written before NPR published its story about some of the women who have accused author Sherman Alexie of sexual harassment.

In the forthcoming Tommy Orange novel "There There," Edwin Black, a 20-something half-Cheyenne man desperately seeks validation as Native. Raised by a white mother, he grows up not knowing what tribe he belongs to or who his father is. Instead, Black spends years in college studying tribal histories and literature, trying to find some sign of who he is. He lives a lonely existence, creating fantasies about his heritage for anyone who asks where he’s from.

“I’m as Native as Obama is black,” he narrates. “It’s different though. For Natives. I know. I don’t know how to be. Every possible way I think that it might look for me to say I’m Native seems wrong.”

There is so much packed into Black’s story: The importance of family and the strains they put on us; the complexities of race in America; and, perhaps most importantly for Native readers, the struggle to identify who you are in a country that barely acknowledges us.

Orange’s book, which drops this summer, is being touted as one of the most anticipated novels of the year. And rightly so. It is a stunning work that follows 12 Natives as their lives intertwine in Oakland, California, culminating at a modern-day powwow. Orange, an enrolled member of the Cheyenne and Arapaho Tribes of Oklahoma, weaves the novel together through each character, changing perspective with every chapter, allowing him to write about countless issues facing Indigenous communities, from representation in Hollywood and cultural appropriation, to suicide and sexual trauma.

Literary groups are distancing themselves from author Sherman Alexie since accusations of sexual impropriety have surfaced.

“One of the reasons I wrote a polyphonic novel is that I come from a voiceless community,” Orange told Buzzfeed’s Anne Helen Peterson.

There is certainly no shortage of amazing Native writers (more on that further down), but Indigenous peoples are right now searching for the next great Native literary voice — and not just for representation’s sake. That’s one of the reasons why the recent harassment allegations against Sherman Alexie, arguably the most famous writer from Indian Country, are so unsettling and damaging.

Pulling from experiences of his youth on the Spokane Indian Reservation, Alexie has garnered critical and commercial success since the publication of his 1993 short story collection, "The Lone Ranger and Tonto Fistfight in Heaven." Last month, he was given the Andrew Carnegie Medal for Excellence in Nonfiction. Last week, a string of comments on a piece about sexual harassment in children’s publishing started a whisper mill that Alexie has for years sexually harassed and intimidated women. Alexie issued a statement Thursday disputing some of the claims and addressing others.

On Monday, three women went on the record to NPR about Alexie's behavior.

Alexie not only found wide appeal through his Native heritage, he mentored and provided resources and inspiration to countless Native writers. He has had a huge impact on the Native literary world, but already his name is being removed from scholarships and children’s literature websites.

Not only is Alexie accused of harming Native women for years, an already vulnerable population, he is being accused of stifling careers. Knowing that one of our generation’s most influential Native authors was harming Indigenous women while publicly trying to build others up would be a particularly heavy blow.

On the other hand, it’s time for a new generation of Native writers to come to the fore. As Debbie Reese, the editor of the literary blog American Indians in Children’s Literature, wrote this week, she always felt Alexie’s work fed too much into mainstream ideas of Indigenous people, further perpetuating myth.

“Alexie’s books don’t give readers the depth of understanding that they need to know who we are, what our histories have been, what we face on a daily basis, and what gives us the strength to carry on. Far too many people adore him and think that they’re hip to Native life because they read his books,” Reese wrote. “If you’re one of those people, please set his books aside. Read other Native writers. Don’t inadvertently join him in hurting other Native writers.”

It’s a good message — and a criticism I’ve been hearing a lot from Native authors and journalists in the wake of the recent allegations. There is a plethora of truly amazing Native writers who have been writing beautifully about our communities for generations. I’ll never forget the first time I read N. Scott Momaday’s "The Way to Rainy Mountain" and how different it felt to me. Along with Orange’s "There There," Terese Marie Mailhot’s "Heart Berries" is poised to be a huge success. (The memoir’s introduction is written by Alexie, another illustration of his reach). The literary world is no different than media or politics: The more Native voices that are represented, the more useful public discourse will be around Indigenous peoples. Writers like Orange and Mailhot are adding their voices to that world.

Both are graduates of the creative writing program at the Institute for American Indian Arts, the country’s first Indigenous-focused MFA program. IAIA, where Alexie has taught, recently removed his name from a writing scholarship after the allegations surfaced. University spokesman Eric Davis told me the “program was started to find, encourage and nurture people to take the place of writers like Sherman (Alexie) and Louise (Erdrich). That second generation hadn’t quite come along yet. It’s time for some new voices, new perspectives and a new generation taking that agenda and moving it forward. Tommy and Terese are just the first two. There are more right behind them.”

I can’t wait ‘til they get here.

Graham Lee Brewer is a contributing editor at High Country News and a member of the Cherokee Nation.