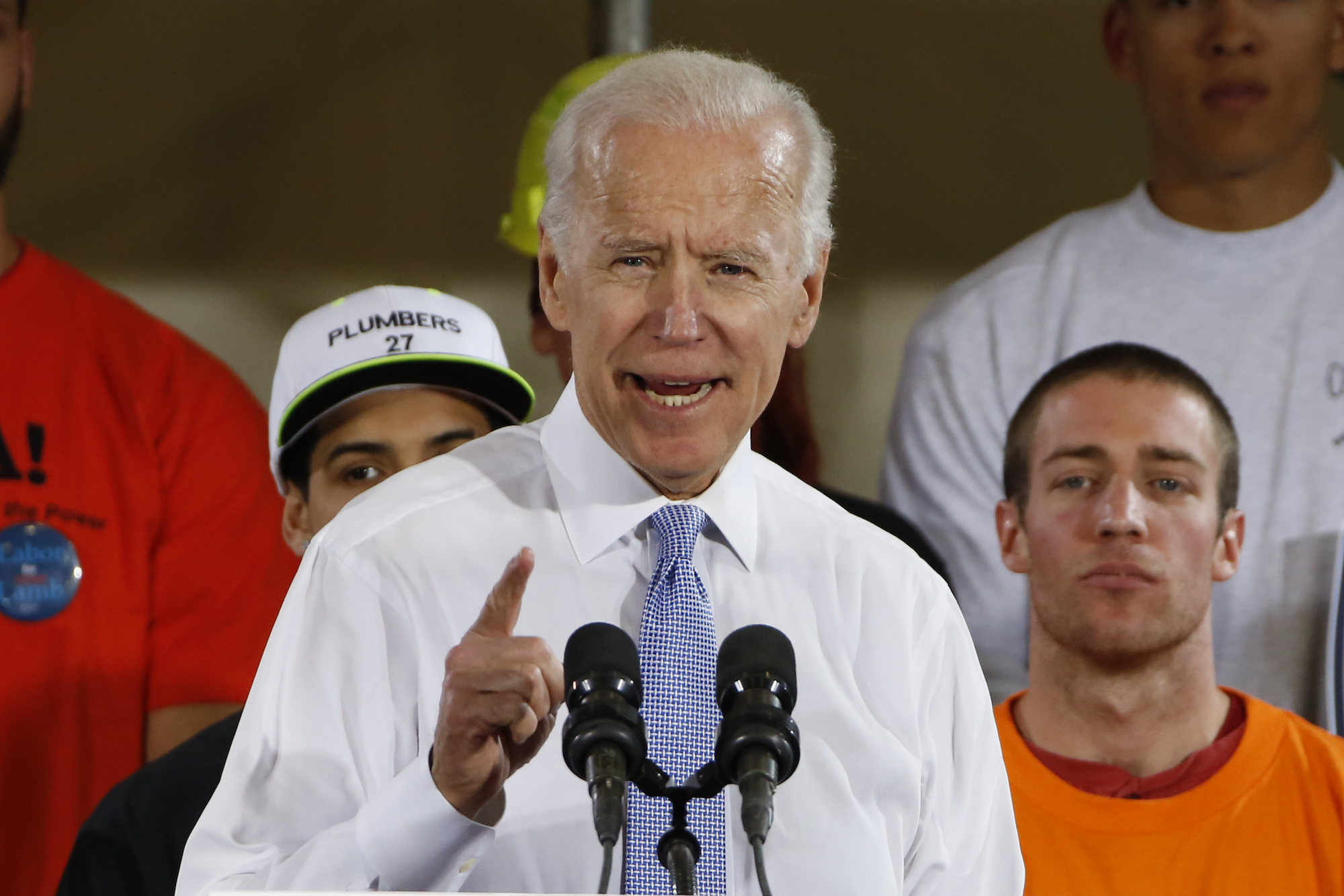 In this March 6, 2018 file photo, former Vice President Joe Biden speaks at a rally in support of Conor Lamb, the Democratic candidate for the March 13 special election in Pennsylvania's 18th Congressional District in Collier, Pa. Biden says he would “beat the hell” out of President Donald Trump in high school if Trump disrespected women. (Photo by Gene J. Puskar/AP, file)

Last week, former Vice President Joe Biden and current President Donald Trump exchanged schoolyard threats. Biden said that if, as a young man, he had heard Trump bragging about how he treats women, Biden would have “take[n Trump] behind the gym and beat[en] the hell out of him.”  Trump, always one to take the bait, responded that Biden would have “go[ne] down . . . crying.” Biden is right to identify Trump’s behavior as sexual assault.  And he’s right to be outraged by it. But in trying to do the right thing, Biden ended up doing the wrong thing.

Biden’s assertion that his younger, less restrained self would protect women from a bully by becoming a bully himself reinforces — to the audience of young people who attended his University of Miami “It’s On Us” rally to end sexual violence — a “boys will be boys” masculinity that values physical domination as a way, perhaps the way, to resolve problems. This, Biden surely realizes, is the same physical domination that Trump — and every sexual predator — exerted when he declared (back in 2005) his entitlement to “grab [women] by the pussy,” to kiss [them] without consent, or to otherwise assault them.

I understand the appeal of this reaction, especially coming from someone like Biden, who has always seen himself as the defender of those in need. But this isn’t just a case of using violence to stop violence. However inadvertently, Biden’s threat reinforces the idea that being a violent bully is okay if he’s being a “good guy;” that his younger self would have been justified in using his power to decide when to offer protection to others.

I want to be clear: I’m not saying that Biden, from his position of power, shouldn’t be working against oppression, including sexual violence. I am saying that he cannot do so by invoking a politics of protection that can only be enacted by those who are able to physically dominate others by virtue of their strength and their political power.

The politics of protection is deployed selectively — and those who deploy it in the U.S. are most often White men. The role of “protector” preserves their status, both by identifying them as those who get to be violent for the greater good and as those who decide who deserves protection.

The politics of protection is shaped by the forces of race, class, gender, and other oppression. For example, much has been made of the juxtaposition between the ways that law enforcement in America responds to different threats based on the race of the person involved.

Interim Austin Police Chief Brian Manley described Mark Conditt — a White serial bomber who targeted and terrorized the historically Latino and Black neighborhood of East Austin, as a “very challenged young man.” In Manley’s words, we can hear a sense of explanation, of loss, and maybe even a sense that society should have done more to protect Conditt from himself.

In contrast, Sacramento police officers made a split-second decision to empty twenty rounds into an unarmed black man, Stephon Clark, as he stood in his grandmother’s backyard. Their snap judgment left an innocent man dead and his children fatherless; it was made by the very people who had been called upon to protect the neighborhood. They made a judgment about who needed protecting that day, but it didn’t occur to them that Clark needed protecting — from them.

And last week, when George Zimmerman reportedly earned $250,000 by selling the gun that he used to murder Trayvon Martin, we are reminded that Zimmerman was only “standing his ground” — invoking a law designed to let people like him protect themselves and their communities against violence from people like Martin. It was the threat that Martin, a Black teenager, may also have had a gun that apparently gave Zimmerman grounds to kill him with the state’s approval. Zimmerman is a protector; Martin — even without a gun — is a threat.

In these moments, we must ask ourselves: Who is being protected? Who gets to do the protecting? And who actually needs protection?

Because women are not always afforded protection against sexual violence when the threat is White men, the politics of protection depends very much on who is accused and who is victimized. When the person who stands accused of sexual violence is one of those (straight, White) “good guys,” he suddenly becomes the object of protection while the victim is often blamed for failing to protect herself.

Brock Turner is identified as a “Stanford swimmer” in news coverage, rather than as a rapist, even after his indictment; the President implies that former staff secretary Rob Porter has been falsely accused of physical abuse. In these cases and in others, women are not presumed to need protection; they are presumed to be the problem. The politics of protection operates here to protect the powerful.

And for all his good intentions, I’m reminded that Biden didn’t go to the mat for Anita Hill decades ago when, as a leader on the Senate Judiciary Committee, he was in a unique position to support and defend a Black woman as she testified about being sexually harassed during Clarence Thomas’s confirmation hearing. At the time, it didn’t seem to Biden that Hill was worthy of protection, either.

To his credit, he has recently acknowledged this failure. To her credit, Hill has noted that Biden’s failure was less about his unfair treatment of her than it was about the message he sent to women everywhere about whether they would be supported in the halls of the U.S. Capitol.

Biden wants to do the right thing, but his remarks reinforced the dangerous notion that (White) men alone can and should be protectors against violence by perpetuating violence. There is a politics to this, and that politics depends on men like Biden (and Trump) making an entitled claim to decide who deserves protection and who doesn’t, and to decide who gets to use violence to protect others and who doesn’t.

This politics will never eliminate violence or oppression because it is a politics that — first and foremost — always protects those with power, not those who truly need protecting.