As Puget Sound region grows, park and rides fill up 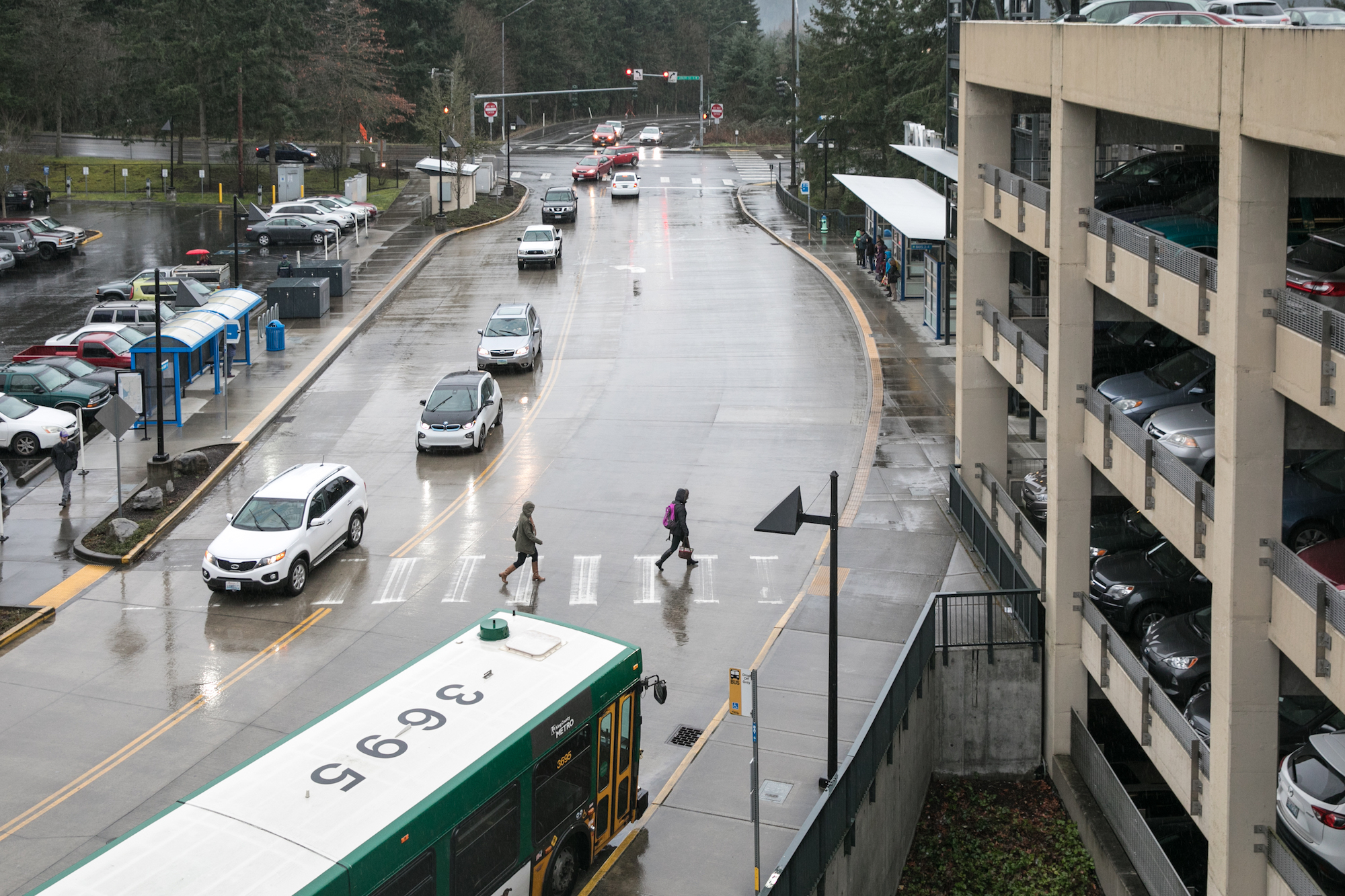 Before dawn, a steady stream of cars starts filing into the Mountlake Terrace park and ride. By 7:25 am, a bright red neon sign warns that all 890 stalls are “FULL.” But the heavy March drizzle nonetheless pushes a somewhat-thinning flow of drivers to circle the five-level garage in hopes of a spot.

About half the time, Cristin Ford arrives too late to find a space at the park-and-ride lot, adjacent to Interstate 5. On those days, the Edmonds resident must forgo the bus, instead adding another car to the region’s congested roads as she heads to her job in downtown Seattle.

“I like taking the bus — especially the commuter buses — because if there is traffic, I don’t have to drive in it,” said Ford. “It’s frustrating there’s nowhere to park at Mountlake Terrace.”

Ford is caught in the middle of a growing dilemma for commuters, transit agencies and elected officials around how to provide parking options that encourage use of light rail, trains and buses without spending too much so that transit expansion is slowed. Some of the discussion also revolves around questions about land use and whether to focus more attention on creating density around transit centers, rather than forcing the public to pay for parking spots.

The Mountlake Terrace park and ride’s crowding reflects the challenges of meeting demand as the region continues to grow and more people look to transit for less stressful and more environmentally responsible commuting options. A 2009 rebuild nearly tripled the parking capacity at the park and ride, which is owned by Snohomish County’s Community Transit. But now, the garage is again bursting at the seams.

“Build more parking” is one of the most common requests Sound Transit receives as its light rail system expands into the sprawling suburbs, where culs-de-sac built for automobiles dominate the landscape.

“Many Sound Transit customers have few reasonably available alternatives for accessing Sound Transit services besides driving and parking a private vehicle,” Kimberly Reason, a spokesperson for Sound Transit, wrote in an email. “In some cases, lack of available parking ... will be a limiting factor for access to the transit system.”

But adding more free parking doesn’t come cheap. Rising property values and soaring construction costs have pushed the price for a future Kent park-and-ride lot at over $100,000 per stall.

To some, that’s a pricey subsidy when it only benefits about a third of Sound Transit customers.

And others, including Seattle City Councilmember Rob Johnson, see parking lots as an unwise use of land adjacent to transit.

“As a [Sound Transit] board member, I spend a lot of time encouraging my fellow board members to think about the millions of dollars being spent in their neighborhoods to build structured parking garages and [to] think differently about how they might want that money to be spent on things like buses, bikes or housing,” Johnson said.

He said Seattle has a longstanding policy of discouraging park and rides in the city, “because we are of the belief we should be building more housing near our transit [instead of] parking lots.”

But his fellow board member, Redmond Mayor John Marchione, says that parking is needed in suburban cities because of insufficient bus service. “The further away you get from the center of the system, the more parking you need,” he said.

“In Redmond, we are focused on both bike and pedestrian access but we also have parking planned for our station that’s further east,” Marchione said. He said many people will drive in from Sammamish, Duvall or elsewhere to board light rail.

Making that first connection from home to transit is one of the biggest hurdles potential riders must clear — an obstacle known to transportation planners as the first-mile/last-mile dilemma. Many suburban residents don’t live within walking or biking distance of a bus stop, and even if they did, many jurisdictions lack the adequate infrastructure to ensure those are safe travel options.

“The reason we have parking investments in our plans is because, through the community process, that’s what folks in those communities told us that they need to access and use our system,” said Matt Shelden, Sound Transit’s director of planning and innovation.

According to Sound Transit, about a third of riders across the agency’s system use the park-and-ride lots, of which the vast majority are solo drivers. The rest walk, bike, carpool, take a feeder bus or get dropped off.

Transportation Choices Coalition (TCC), a transportation advocacy group that works to expand transit options, agrees with Sound Transit that many suburban riders lack other options besides driving to access transit. But TCC doesn’t see building more parking as the answer to the first-mile/last-mile dilemma.

Hester Serebrin, the policy director at TCC, in an email suggested there were better ways to spend money on transit, instead of earmarking it for parking. She said, for instance, “if officials focused development efforts on transit-oriented development — housing and employment centers around those now-suburban stations — all of a sudden more taxpayers in the Sound Transit district [will] have more access to transit, in more affordable and sustainable ways.”

Sound Transit is wrestling with rising project costs that have delayed the opening of the Lynnwood Link Extension, an 8.5-mile expansion that will run from Northgate to Lynnwood, with two stops in Shoreline and one in Mountlake Terrace. One suggestion to keep the project on time and under budget is to first eliminate new parking from the plan.

But “if parking is not provided where it is really needed, it is going to have a dampening effect on ridership,” Sound Transit’s Shelden said. And that will mean more cars on I-5.

If parking is going to be expanded, TCC’s Serebrin would rather Sound Transit lease existing parking rather than build new parking; build shared parking with other new development in the area; or build parking in a flexible way so it could be converted to other uses in the future. The advocacy group also wants transit agencies to begin charging a daily price for parking.

Early one Thursday morning, Brady Gregor arrived at the Mountlake Terrace Transit Center just in time to snag one of the last open parking spots.

“I just made it today; there were only three spots left,” Gregor said, grinning at his luck.

On mornings the lot is full, Gregor drops his car back at home and walks the mile to the transit station. That’s too far for some to walk comfortably, but it’s his preferred alternative, rather than paying for parking near his job in Seattle.

To the delight of many urbanists, in an effort to manage supply and demand of these free parking spaces, transit agencies across the region — including Sound Transit and King County Metro Transit — are considering implementing a parking fee. In return, drivers would be guaranteed a spot.

“It’s a question about fairness and equity: We have this park and ride; who gets to use it?” Johnson said. “And how much should they be paying for it?”

As part of ensuring equity, Johnson would want any paid parking program to include a full subsidy for low-income riders.

“When we are seeing the private sector market charge for parking in a neighborhood and we [Sound Transit] are not, we should be sensitive to that point and recognize that and do something about it,” Johnson said.

But convincing riders to start paying for a once cost-free amenity is a hard sell.

“It would have to be really cheap,” Gregor said.

But, advocates say, a high-enough price could actually encourage riders like Gregor to leave their cars at home and instead access the transit center by walking, biking or participating in a carpool.

For others, the assurance of a guaranteed spot would be tempting.

“If it was a guaranteed spot at the Mountlake Terrace park and ride, I would crunch the numbers,” Cristin Ford said. “But if the cost is close to equal, I would rather just drive into Seattle and have the flexibility of having my car.”

If Sound Transit charges the current market rate for parking, the agency said some spaces could cost as much as $90 per month — still far below the current rate many downtown Seattle parking garages charge.

In Auburn, private parking companies had seized on the high demand to open up their own for-pay lots near the overcrowded Sounder Station. The city then rolled out a paid parking program for a lot it owned nearby. At first, residents grumbled. “But, now there [are] never any complaints about having to pay for parking; now the only complaint is, ‘we want more of it,’ ” said Jeff Tate, Auburn’s assistant director of community development.

Tate said charging for parking was just logical and allows the city to recoup the costs of managing the program.

“The rest of the taxpayers can’t foot the bill and subsidize the parking bill for private parking,” Tate said.