Rarely exhibited in the Pacific Northwest, art-world legend Basquiat is now on view 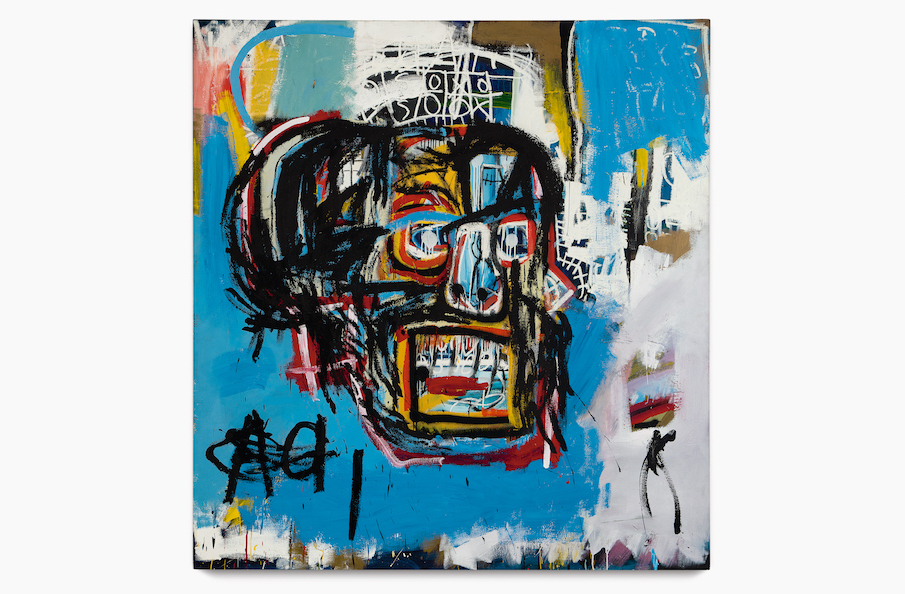 When Jean-Michel Basquiat’s painting “Untitled” was up for auction at Sotheby’s last May, the catalogue copy contained a cavalcade of breathless description: “a cacophonous melee of color, light and sound,” an “explosive torrent of gestural vigor” and an “unbridled painterly assault” that is “pulsating with creative furor.”

Such tortured hype can be hard to believe, but in this case, it’s understandable. Created in 1982 when Basquiat was just 21 years old, “Untitled” marks his leap from street-based graffiti artist to respected canvas painter. In the larger art-world context, it also coincides with the return of figurative painting — which had fallen out of fashion in the 1960s and ’70s. And until the Sotheby’s auction, “Untitled” hadn’t been shown publicly for some 30 years.

Big, bold and, yes, “pulsating with creative furor,” the piece is a stunner. A thickly sketched, disembodied skull floats on a vivid blue background that disintegrates in places, revealing primary colors and countless more layers of paint. The skull is possibly alive, and definitely vibrating. Its square mouth is agape, exposing piano-key teeth. At lower left, an uppercase A sits next to its lowercase sibling, as in a children’s primer. It looks like it might be a sound, like Aaaah. But is the skull shouting or singing?

Sotheby’s sold the work to Japanese billionaire Yusaku Maezawa for $110.5 million — the highest price ever paid at auction for a work by an American artist — breaking a record previously held by Basquiat’s good friend Andy Warhol.

It’s Maezawa we have to thank for the painting’s arrival at Seattle Art Museum (on display now through Aug. 13). Rather than keep the bounty to himself, the tech tycoon and collector announced via Instagram that he wants as many people as possible to experience the work in person. After sending the masterpiece on a world tour — SAM is the second stop — Maezawa will install it in a new museum he’s building in Chiba, Japan.

“We can provide a fruitful context,” says Catharina Manchanda, SAM curator of modern and contemporary art, noting the painting’s placement across the hall from Warhol’s “Double Elvis.” “The friendship [between Basquiat and Warhol] began in New York City,” she says, “right around the time Basquiat created this painting. They became close friends and collaborators, hung out in the club scene and painted each other’s portraits.”

Raised in Brooklyn by a Haitian father and Puerto Rican mother, Basquiat was an artistic wunderkind, revealing early talents for drawing, theater and music. But although he swiftly became a darling of NYC’s downtown art scene, he was acutely aware of the particular difficulties of being a Black artist amid a largely White gallery crowd. “Black culture was very much on his mind,” Manchanda says. “Through today’s lens, we can see him trying to find a voice and visuals for that.”

Basquiat channeled the energy and rawness of graffiti into his prolific body of fine art. “Graffiti has to be created fast, as you watch out for police,” Manchanda notes. “It’s a way of speaking truth to power.” And though he moved on from city walls to canvas, Basquiat retained massive respect for the street ethos. It likely also contributed to his sense of artistic fame as fleeting, since street art might get painted over or torn down, the same way artists are tossed aside for the next big thing.

With hindsight, given Basquiat’s tragically short career — he died of a drug overdose at age 27 — it’s hard not to view “Untitled” as a memento mori. These classic artistic reflections on the fragile nature of life are meant as reminders that no matter what trappings we amass, or celebrity we achieve, we can’t escape death. Sitting atop the skull, like a crown or a thought, is a hastily scribbled round of tic-tac-toe — a game that once mastered always ends in a draw.