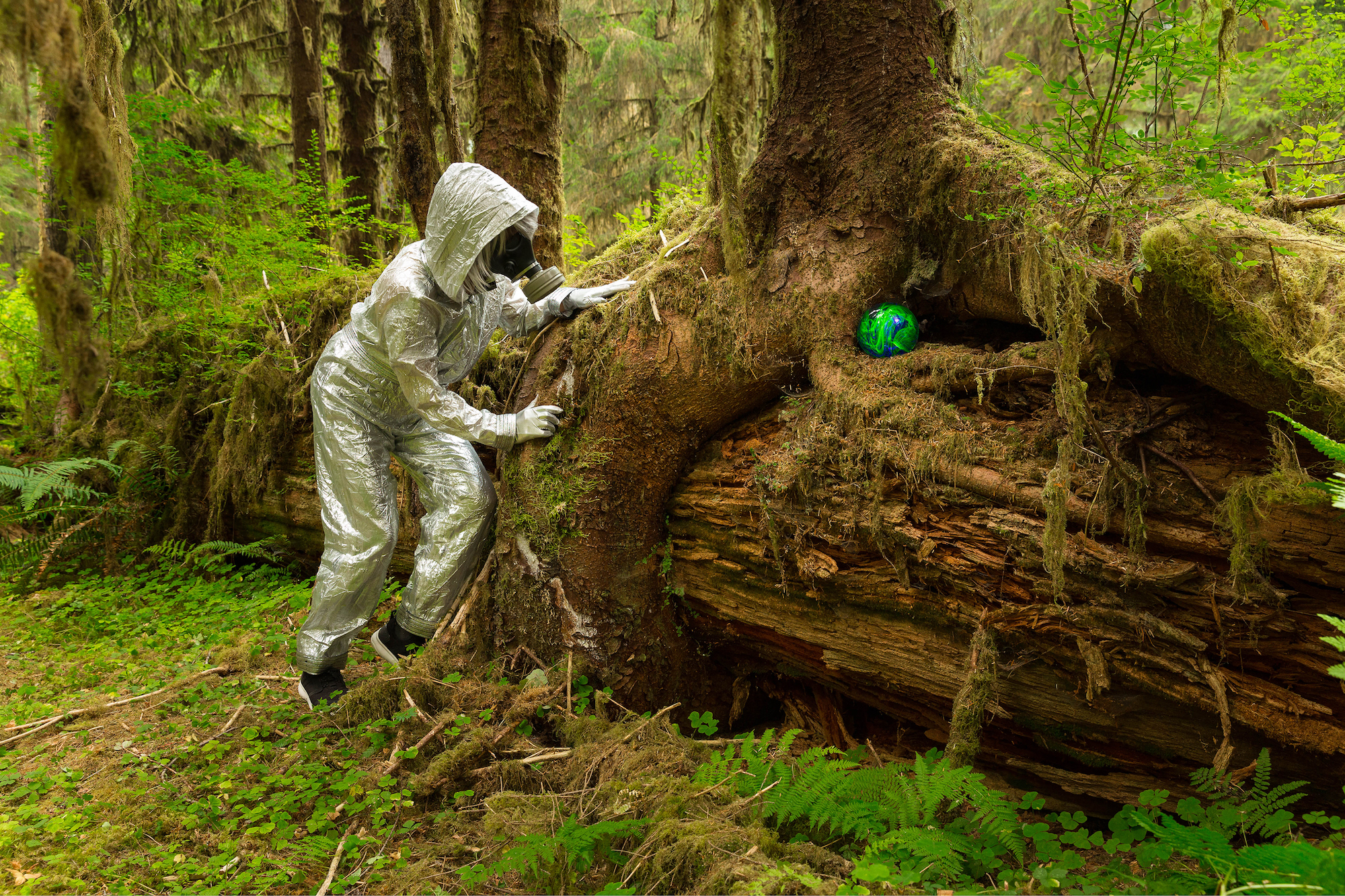 A forest glade, a pristine beach, a fallen figure in a hazmat suit — that sequence of images strikes notes of quiet terror in “Vitrified,” a powerful new show by Seattle artist Etsuko Ichikawa at Winston Wächter Fine Art. Ichikawa’s inspiration was the nuclear meltdown at Fukushima following the 2011 earthquake and tsunami. In the short film that is the exhibit’s centerpiece, the hazmat-suited figure (Ichikawa) finds an iridescent glass orb that asks to be returned to its ocean source. As she complies with its wish, she grows increasingly weak and unsteady, until she collapses on a vast dark beach, the orb tumbling from her hand. “Vitrified” includes striking stills from the film (Ichikawa looks like some post-apocalyptic Alice in a sylvan yet toxic Wonderland) and an installation of the orbs themselves, made from hot-sculpted uranium glass whose radioactivity is contained but not neutralized by the vitrification process. “It is believed to take over a few million years to naturalize vitrified radioactive waste,” Ichikawa says in her artist’s statement. Also featured are Ichikawa’s signature “pyrographs”: drawings on paper created with strands of molten glass. Gorgeous, sinister, otherworldly, “Vitrified” ponders the lethal legacies we’re leaving for future generations. One small note of reassurance: The uranium glass, imported from New Zealand, comes with assurances that it won’t nuke you.

The Boys from Syracuse

The first musical based on a Shakespeare play, “The Boys from Syracuse” has been delighting audiences since it premiered nearly a century ago. For one weekend only, see songwriters Rodgers and Hart’s take on “A Comedy of Errors,” part of the city-wide “Seattle Celebrates Shakespeare” festival put on by 5th Avenue Theatre. Showtunes Theatre Company, which “creates concert versions of many of the unsung American musical theater gems,” will partner with Village Theatre’s Steve Tomkins as the director of this absurd and raucous world.

The '80s are in right now, or so someone at a thrift store told me as I was buying a radical sweater for an '80s-themed work party. But this party — thrown by and for the nerdiest among us — is something special. There will be a Lite Brite Tower along with many offerings from the exploratory tech emporium that is SODO’s Living Computers: Museum + Labs. Check out an original DeLorean, experience '80s-themed VR immersion. See if you can still win at retro arcade games and take part in a serious retro scavenger hunt. One plus: from 7 to 9 p.m, there will be aerialists.

Choreographer Crystal Pite, whose work has wowed audiences at Pacific Northwest Ballet and Nederlands Dans Theater, brings Kidd Pivot, her own Vancouver, B.C.-based dance troupe, back to town for a performance of “Betroffenheit,” a collaborative project with Electric Company Theatre. In “Betroffenheit” (German for “shock” or “bewilderment”), actor/narrator Jonathon Young is stricken by repeated memories of traumatic loss. Each syllable of his words triggers nightmarish yet riveting reactions in Pite’s extraordinarily gifted dancers. This is a dance/theatrical creation you don’t want to miss. For Kidd Pivot completists, Northwest Film Forum will offer a chance to revisit another Pite classic when it screens “Dark Matters,” a creator-vs.-creation dance-theater piece filmed for OntheBoards.tv in 2011. That showtime is 7:30 p.m. March 28, $7-$12.

The Seattle Obscura Society kicks off a new series on food with “All Consuming: Odd, Unusual Petrified and Preserved Food.”  Seattle-based writer and radio producer Harriet Baskas, whose curiosity has taken her to reporting on oddities from airports to the Oregon coast and beyond, will lead the diverse talks in this 4-part series. For part one, Baskas will take guests on a tour of forgotten foods over time, from fruitcake to the world’s oldest noodles. Guests will also enjoy complimentary small bites and a short talk on the role of preservation by London Plane lead chef Ricardo Valdes. In future installments look forward to Food in the Arts, Food and Love and Food, Faith and Fare Made by Religious Orders.

Displaced in light of Town Hall renovations, Seattle University offers the annual King-Snohomish County Spelling Bee a home.  This year’s bee will be moderated by Seattle Radio Theatre Founder and KIRO radio producer Feliks Banel and, as usual, the top speller will advance to the Scripps National Spelling Bee in D.C.  Word nerds are also encouraged to check out lexicographer and author Kory Stamper on “The Secret Life of Dictionaries” following the Spelling Bee at 6 p.m.