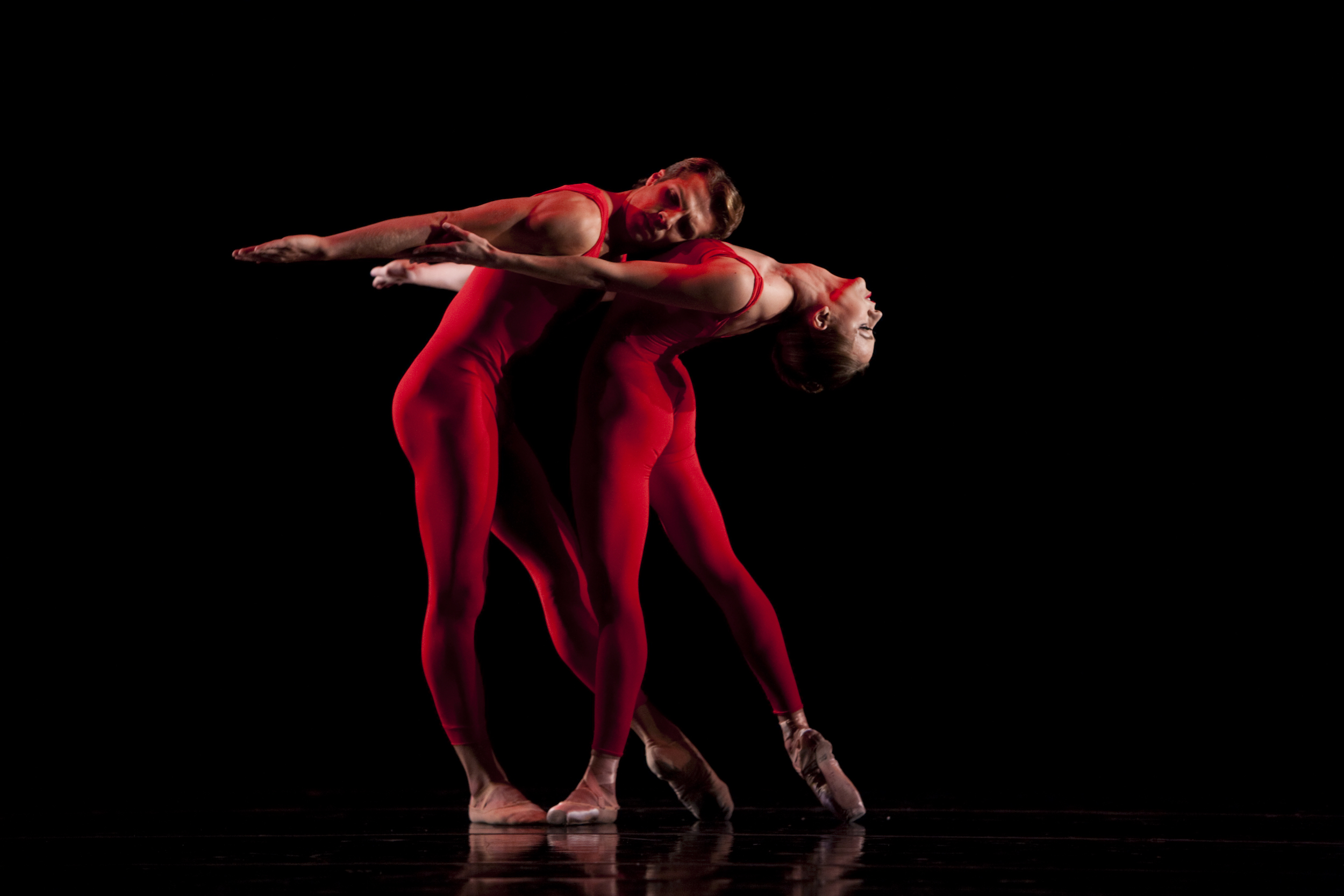 Here’s a recipe for dance about as far from classical ballet as you can get: Take fourteen acrobatic dancers. Have them zip, fly and spin around the tops, edges and undersides of twenty metallic tables shoved into place. Throw in colorful costumes, a pulsing raga of electronic sound, and what you get is William Forsythe’s “One Flat Thing, reproduced”: a thrilling, fugue-like ensemble piece that wowed some and dismayed others when PNB director Peter Boal first introduced it to PNB’s repertoire in 2008. Other items on Boal’s new “Director’s Choice” program include Ulysses Dove’s elegant, angular “Red Angels,” for four dancers and electric violinist, and the premiere of PNB soloist Ezra Thomson’s “The Perpetual State,” which examines how painful losses, over time, become a part of your life, shaping you as much as love shapes you. In rehearsal last week, Thomson’s piece offered brisk, springy, sharp geometries of movement, while images of bodies being carried and relinquished hinted at mournful territory to come. Poulenc’s “Concerto for Two Pianos and Orchestra” guides the moods and action.

Living in Seattle, I often feel connected to nature in a way that my friends in other cities don’t. We’re so fortunate to be within view of the mountains and near beautiful parks. Lately, in Fremont, I’ve been nodding hello to a flock of scaups, a little black-and-white and blue-headed creature that my friend Ben calls “a mighty fine duck.” See the scaups and so many other avians at the Wings Over Water Northwest Birding Festival, taking place near Blaine, Washington along the coastal waters of Drayton Harbor, Birch Bay, and Semiahmoo Bay. From ducks to cormorants to raptors like the peregrine falcon, learn about and behold nearly 85 species of birds that call this area their home, through talks, walks, field trips and birding cruises.

Now celebrating its 15th year, Seattle’s grand vaudeville/variety-act showcase brings jugglers, acrobats, aerialists, comedians, singers, dancers and a host of more unlikely talents to town. (I’ll never forget motor-mouthed Rob Williams making a sandwich with his feet and serving it to a willing audience member.) The family-oriented offerings are at Hale’s Palladium in Fremont (although late-night shows there are for 18 and older). The burlesque-flavored “Libertease Cabaret” shows are at Broadway Performance Hall.

Stand in front of the works of California artist Evan Nesbit and you may have trouble grasping what you’re seeing. They seem to be huge, splashy, candy-colored abstract paintings, until certain ghostly images — of a pair of hands, a saucepan or an orchid on a windowsill — faintly register. The surface textures don’t make sense either: they seem composed of raised pinpoints of paint produced by some other means than brushstrokes. Nesbit’s starting point in each piece is a photograph of an ordinary sight that caught his eye. He prints these on a porous vinyl material (the same one used for billboards so the wind won’t tear them or blow them over), then paints them from the back by squeezing his bright colors through the vinyl’s tiny holes. While he has a general compositional aim in mind, he can’t observe his painted results directly as he works, so there’s an element of chance involved. The results are energy-filled, multilayered and giddily bewildering. Photograph? Painting? Conceptual performance? “Ever Dissonant Futures” combines all three, with phenomenal results.

Since 2010, frontwoman Paula Boggs, backed up by her 5-piece band, has been combining jazz, rock, world music and Americana. Head to Fremont Abbey Arts Center — a beautiful, perfectly sized performance space — to take in the Paula Boggs Band’s resulting sound: “Seattle-brewed soulgrass,” which incorporates accordions, banjos, and melodica. The band does some gorgeous instrumentals but I particularly like “Goo Goo Dolls,” the light-hearted meditation of one of my favorite bands from my youth.

Becky Selengut: How to Taste

Becky Selengut has been cooking and writing about food in the Pacific Northwest for over a decade. I’m familiar with her through her 2011 cookbook “Good Fish,” which marries sustainable fish selections with recipes that are both approachable and special. Like her previous work,  Becky’s newly-released book “How to Taste,” is snapshot of how she approaches food: with humor, passion and accessibility. She’ll be at Fremont’s Book Larder to tell us all about the science of taste (think salt, acid, bitter, sweet, fat, umami, bite (heat), aromatics and texture), discuss related recipes and sign copies of the new book.

History Cafe: Capturing Bertha and the Biggest Tunnel in the World through Film and Photography

Years ago, I went on a walking tour of the Alaskan Way Viaduct, setting off a decades-long personal interest in transportation history, which touches on technology, geography, politics, culture and so much more. Photographer Catherine Bassetti saw the complexity of transportation projects up-close, capturing images of Bertha and the people who worked on the ongoing transportation megaproject that is the SR 99 tunnel project. She’ll be in conversation with HistoryLink’s Jennifer Ott, as a part of MOHAI’s History Cafe series, showing exclusive shots and videos from this unique era in Seattle transportation.