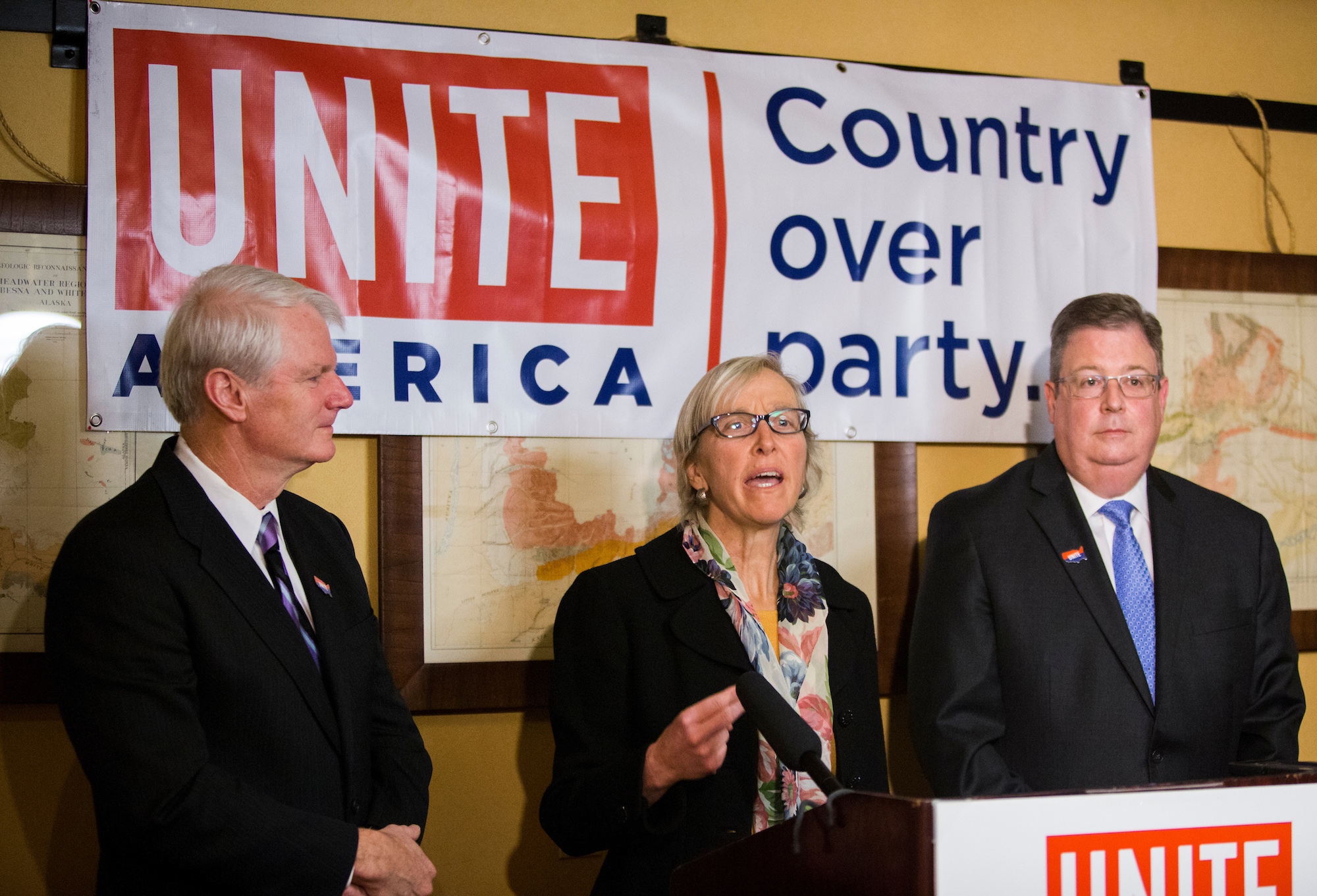 A doctor and clinic owner from Winthrop, Diamond will run against Republican incumbent Cary Condotta in District 12, which includes Wenatchee and Leavenworth.

“Partisanship is a disease that has infected our politics,” said a joint statement from Washington Independents co-chairs Chris Vance and Brian Baird. “We believe Dr. Diamond can be part of the cure as an independent leader in the Washington Legislature.”

They’re starting small. Vance says the goal this year is to raise somewhere between $20,000 and $100,000 and focus that money on “centrist, moderate, independent candidates” for seats in the Legislature.

“We don’t need to raise millions of dollars,” Vance argues, because state legislative races are less expensive than statewide ones. And he posits that a small group of centrist independents could potentially control the balance of power in an otherwise evenly divided state House. Democrats have a two-vote majority, 50 to 48.

But Washington Independents is still planning bigger things. “I’ll say it right now,” Vance announced from the podium at a press conference in downtown Seattle: “My goal is in 2020 that we have an independent serious candidate for governor in Washington state.”

He adds that one potential local legislative candidate, Ned Witting, has not announced yet but is “strongly considering” an independent run, and there are two or three more potential independent candidates in the wings.

Condotta — the Republican incumbent Diamond is challenging in District 12 — did not return a request for comment. In 2016, Condotta defeated Democratic opponent Dan Maher by 26 percentage points and has held the state House seat since 2003.

The state Republican and Democratic party chairs also did not return requests for comment, though they were each predictably skeptical of independent candidates when Washington Independents formed this past fall.

Today’s announcement was part of a national press tour by the group Unite America, formerly known as the Centrist Project, which this week released a slate of independent candidate endorsements for statewide races — gubernatorial candidates in Alaska, Maine and Kansas, and U.S. Senate candidates in Missouri and Maryland. In addition to Washington Independents, Unite has local affiliates in Maine and Colorado.

Unite America’s executive director, Nick Troiano, is hoping for a domino effect — if they prove they can field good candidates and get them elected (“It just takes one to do that,” he says excitedly), then those who worry about running without the backing of a party might feel more comfortable. He cites a recent Gallup poll that said 44 percent of Americans identify as independents, a 5 percentage-point jump since 2016.

What does it mean to run for office without a party platform to clearly broadcast your positions? Diamond says people aren’t sure what she means when they ask her party affiliation and she responds that she's independent.

But she calls Okanogan County, where she lives, “very rural, very proud, very independent, and very frustrated with the current stalemate in our state legislature,” and says she likes getting into issue-specific conversations with voters. District 12 includes all or part of Chelan, Okanagan, Douglas and Grant counties.

She recalls talking gun rights with a man in a coffee shop, who insisted that any legislation limiting access to firearms was a slippery slope. “He sat down next to me like, put up your dukes. … He and I are starting from different spots.” But after further conversation, she says, it turns out they agreed on universal background checks and a ban on bump stocks.

Washington Independents doesn’t vet the candidates they support for stances on individual controversial issues. Instead, they ask them to agree on a centrist vision — built on principles rather than specific policies — that they and Unite America call “the Declaration of Independents.”

Diamond was included in a recent Washington Post profile of anti-Trump activists in rural Washington.

When independent candidates get press, Vance says he sees new interest from candidates. After today, he predicts: “My inbox will fill up with people saying, ‘I wanna run!’”