In their own voices: Why Seattle’s youth marched

The many reasons some of the 50,000 Seattlelites joined the March For Our Lives protest Saturday. 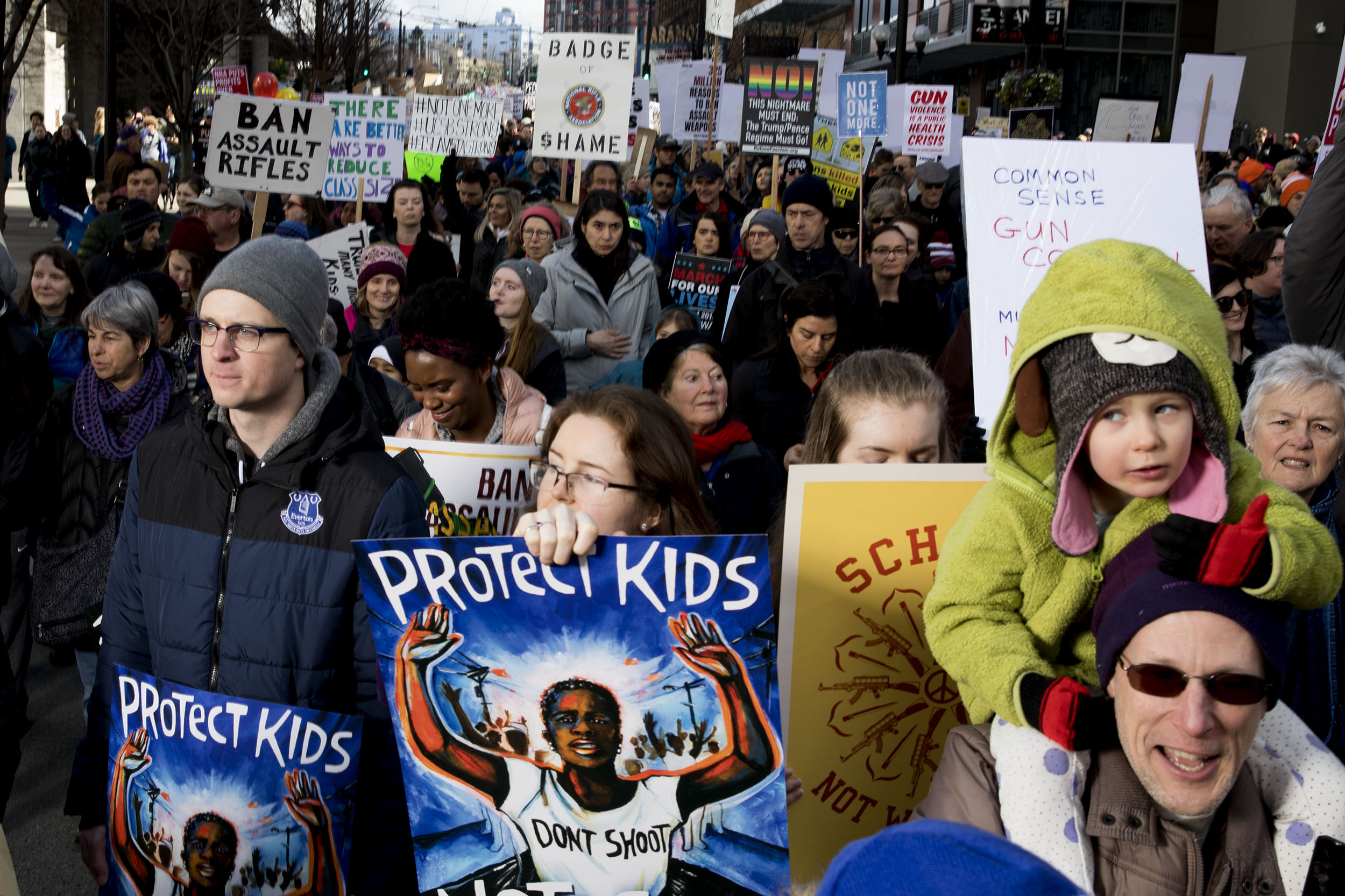 Many children and young adults were among the thousands of people who marched through downtown Seattle on Saturday, March 24, 2018, as part of the March For Our Lives protest. The worldwide event called for gun control reforms in the wake of a school shooting last month in Parkland, Florida, that left 17 people dead. (Photos by Matt M. McKnight/Crosscut)

Countless young adults and children — some just barely old enough to be starting school themselves — say these were their main motivations to join the more than 50,000 people who marched through downtown Seattle for the March For Our Lives protest on Saturday.

Across the globe, hundreds of thousands of people took part in more than 800 sister marches, like Seattle’s, that were tied to the primary event held in Washington, D.C. The movement was sparked by the school shooting in Parkland, Florida, last month that left 17 dead, and the marches demanded that state and federal lawmakers pass gun control reforms and measures to ensure safer schools for today’s children and future generations.

Seattle’s march drew mostly adults and families, along with many children and teenagers. Their reasons for marching ranged from the personal to the political, but with the same desire: To live a life without gun violence.

Here are some of their voices. 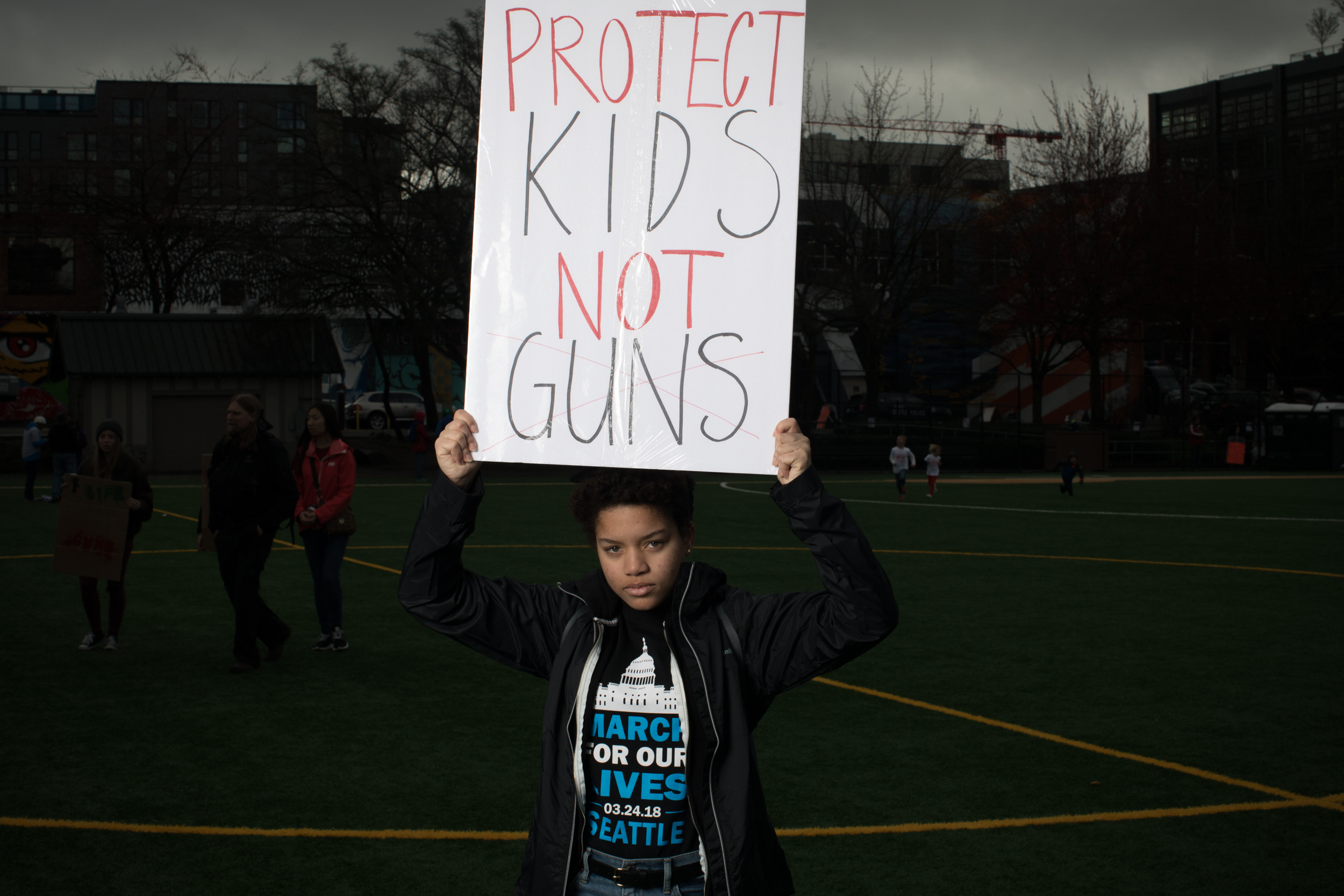 “I’m tired of the violence against kids like me, especially black kids,” said Cayden, a high school freshman. “I don’t feel safe coming to school anymore and I need protection at my school. The NRA and a lot of people in our community care more about their Second Amendment rights than they do about the children going to school and the future of America.” 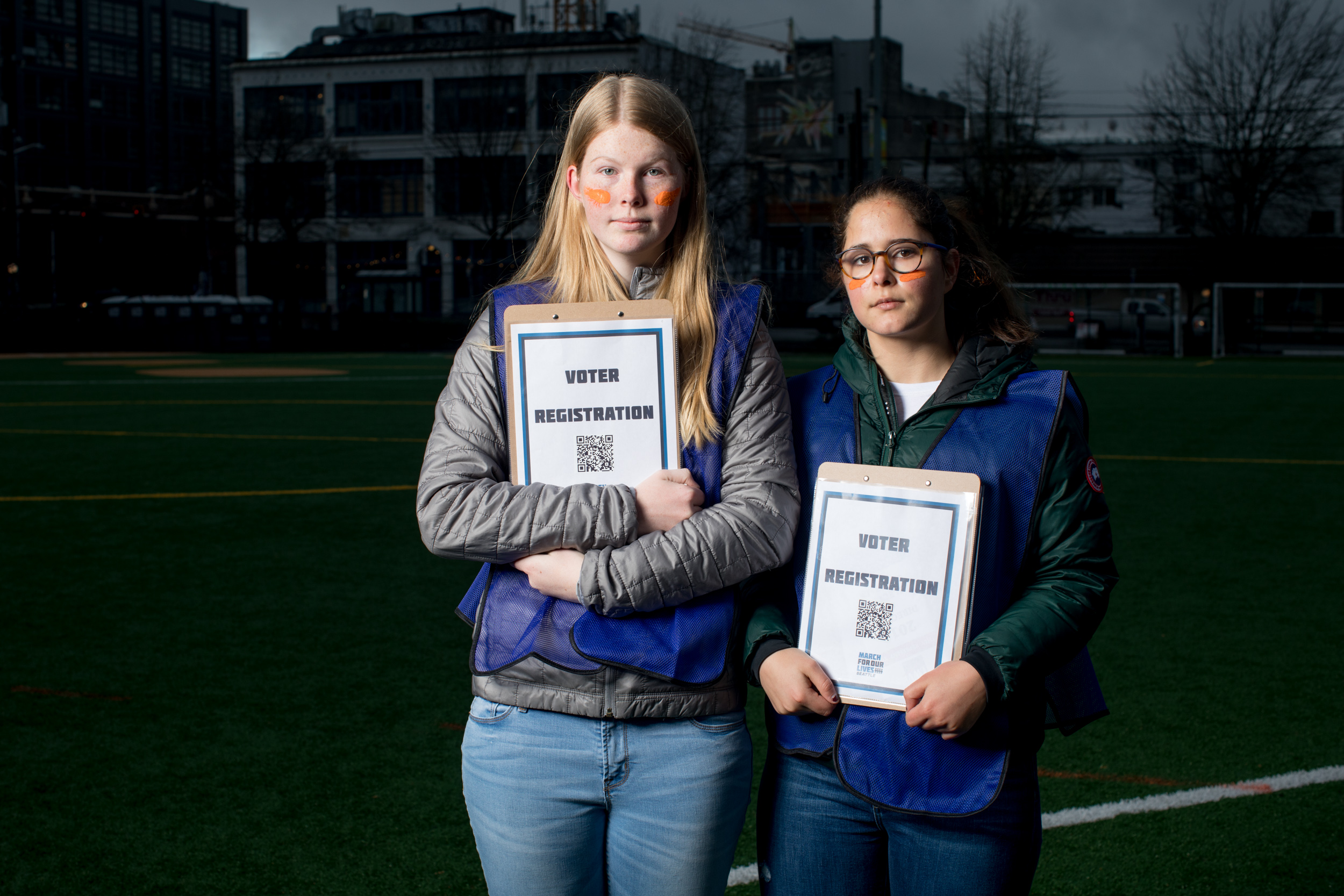 Liddy Boland, 16, and Maria Russinovich, 17, both of Redmond

Maria Russinovich and Liddy Boland were among the dozens of volunteers helping marchers register to vote. “It’s time to get some gun control happening,” said Maria, right.

Liddy added: “We’re tired of watching our peers die in schools. The real way to get your voice heard is to vote. Legislators have to listen to you when you vote, because if they don’t you can vote them out of office, and so while a march is effective in getting people’s attention, the way to really create lasting change is to vote.” 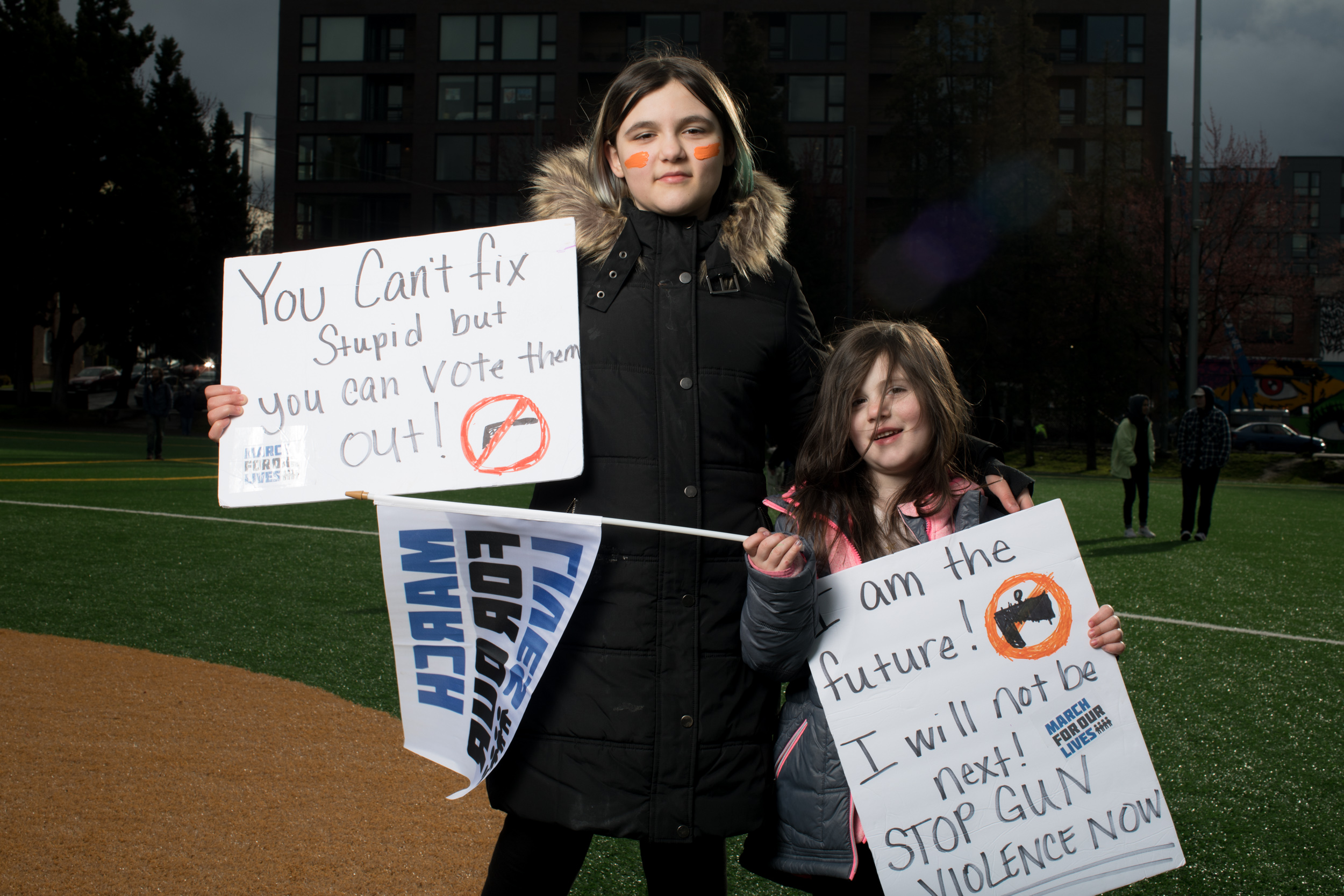 Caitlin Boswell, 9, and sister Caroline, 5, both of Renton

Caitlin attends virtual school now and Caroline is in pre-school, but next year, they’ll be in public school. “We care for the little kids and others who are going to public school afraid,” Caitlin said. “And next school year … we don’t want to be afraid of going to school and being worried we’ll be shot and killed.” 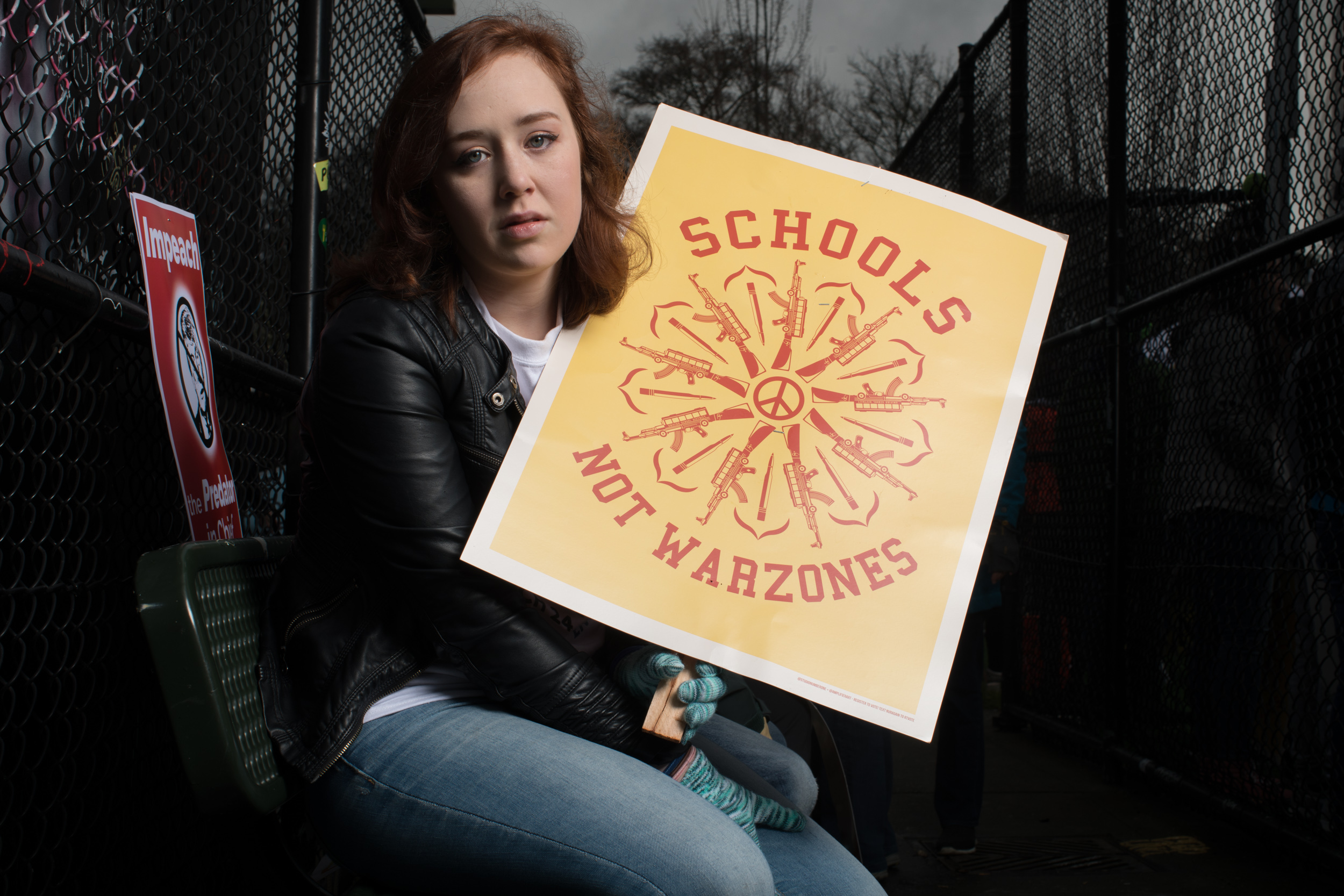 “Whenever I was in school, I was always worried about a shooter being there. My one real memory of high school is always looking for entrances and exits,” said Lilly, as tears welled in her eyes. “At one point, there was actually a shooter in our school. [The person] brought a gun in but he was caught on a [security] camera so nothing actually happened, but it was still really scary.”

She added: “The amount of kids that die each year just from school-related gun deaths is off the charts and it’s not OK. And the fact that it’s taken this long to even get a real march with people across the country and [for] people to actually notice, it just says something about our government.” 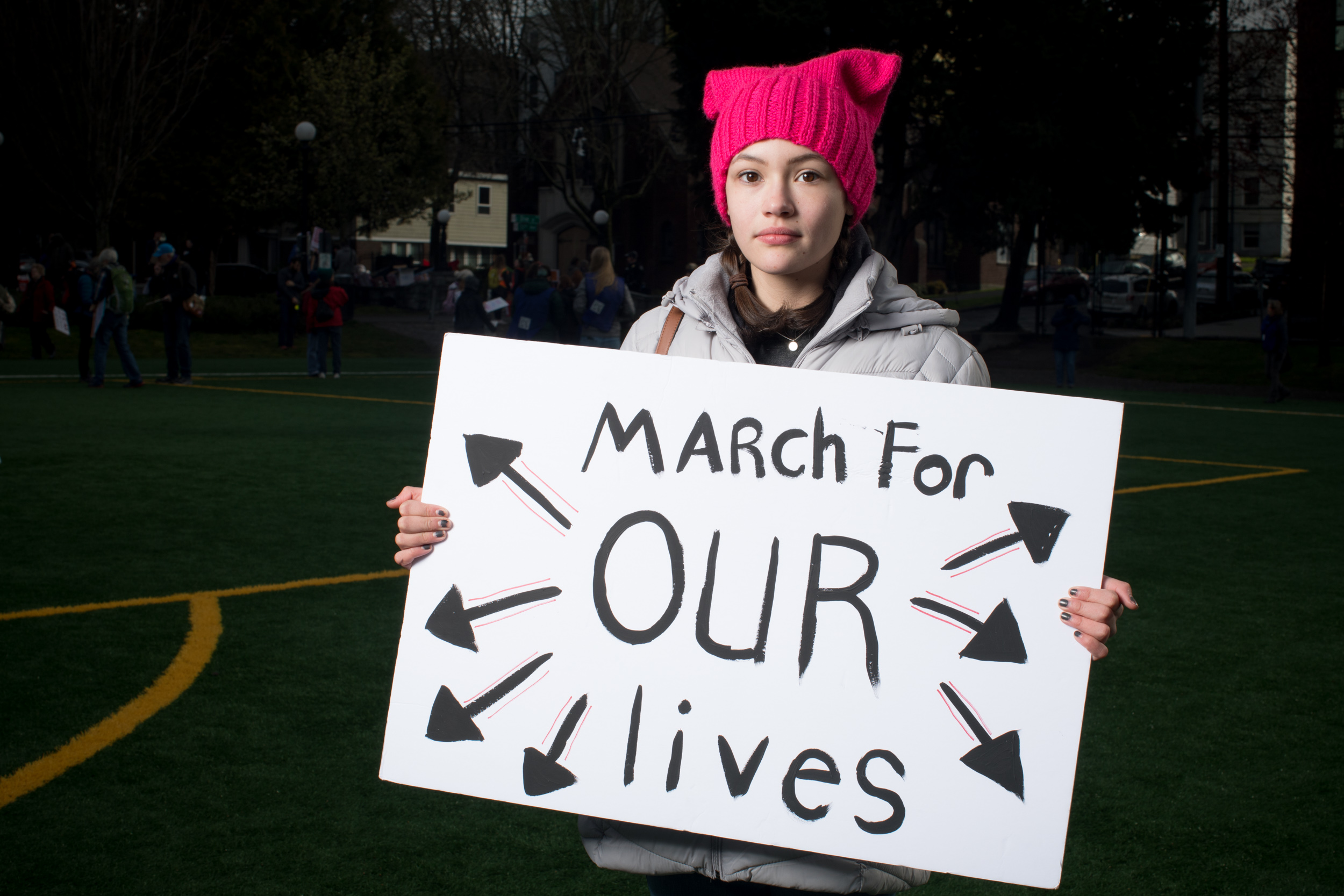 “I’m just marching for lives, including myself and my friends and family — just showing we need a change in our policy and our government system. We can’t keep having this happen over and over again and just keep saying ‘thoughts and prayers,’ ” said Annabell. “We need to actually have change, and it’s just a really good cause to stand up and voice your own voice.” 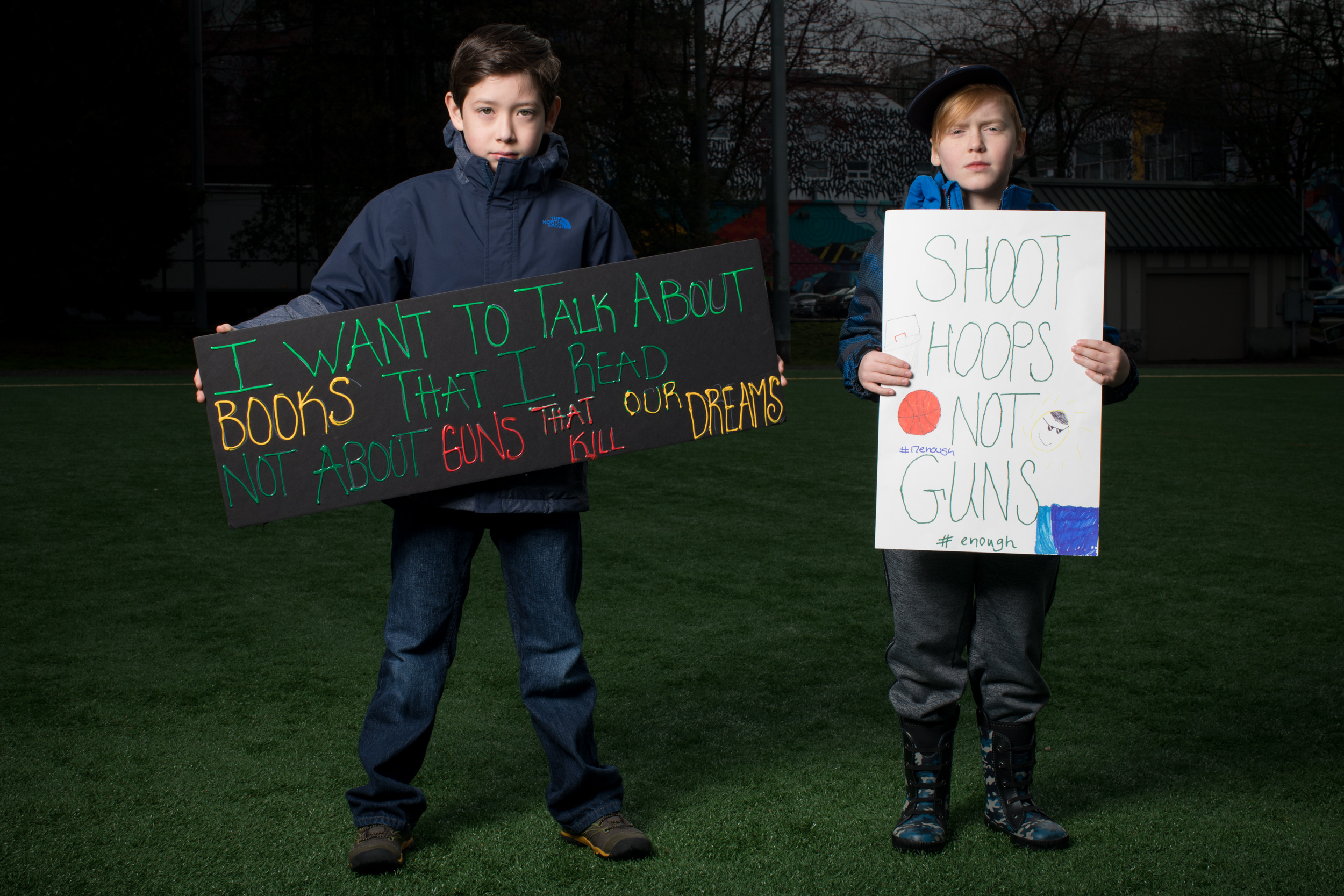 Diego Villegas, 8, and Kai Mumma, 8, both of Bellevue

“I don’t want anyone to use guns to hurt people, just to keep us safe,” said Diego, left. Kai said his mom and dad don’t support teachers having guns, and he said he would be scared if his teacher had one. “Mostly because if a kid found it and they didn’t really know what it was and they shot someone — that would be bad,” Kai said. 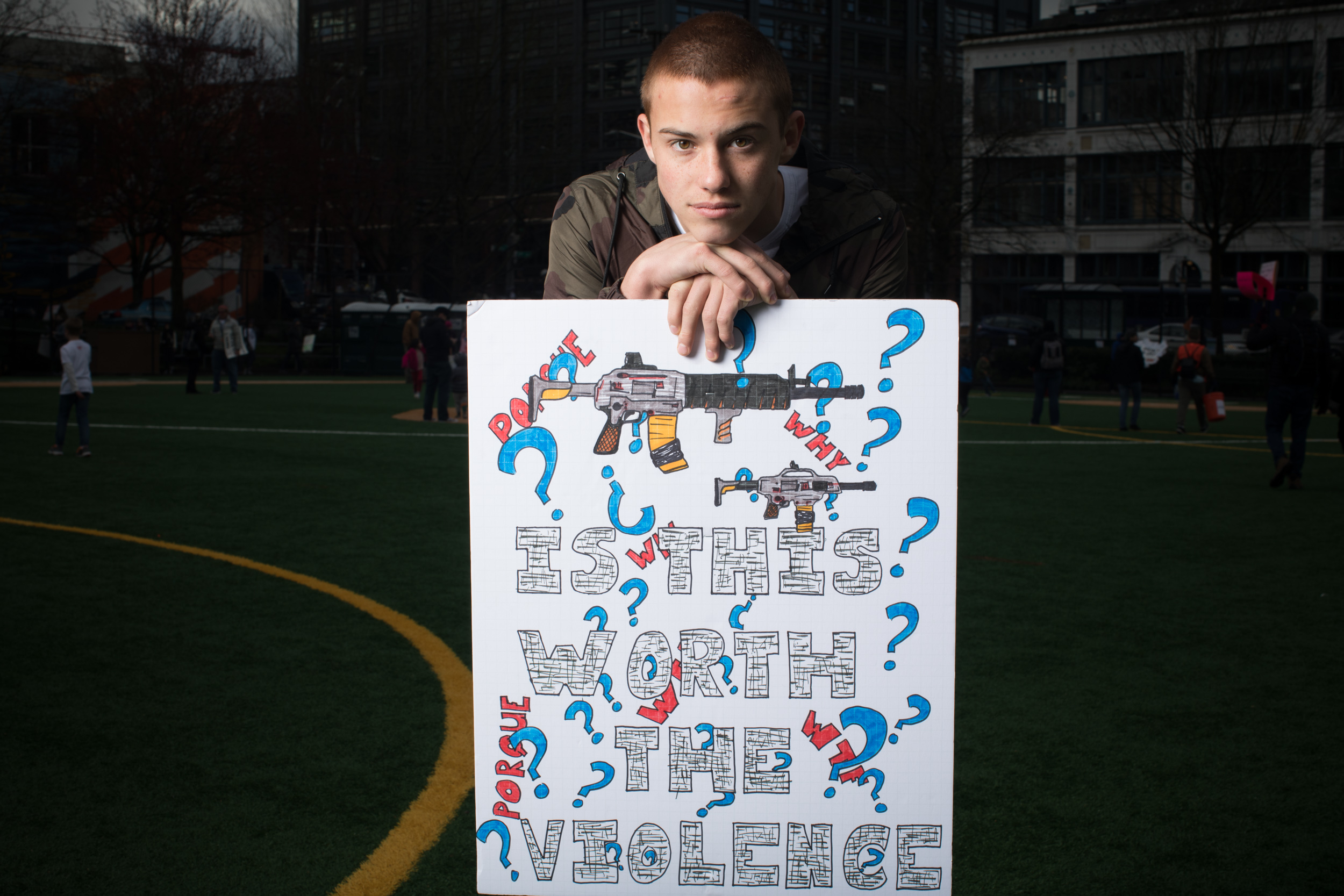 “I personally love shooting guns but at the cost of how many lives? Definitely not worth it,” said Asher. “My mom and I go shooting a lot. We were going to go shoot automatics but then a couple school shootings happened and my mom kind of put the hammer down and she said, ‘No, this is not right.’ I definitely say shooting guns is way fun, but that’s really the only excuse to have an automatic weapon is they’re fun, and you have nothing else other than that.” 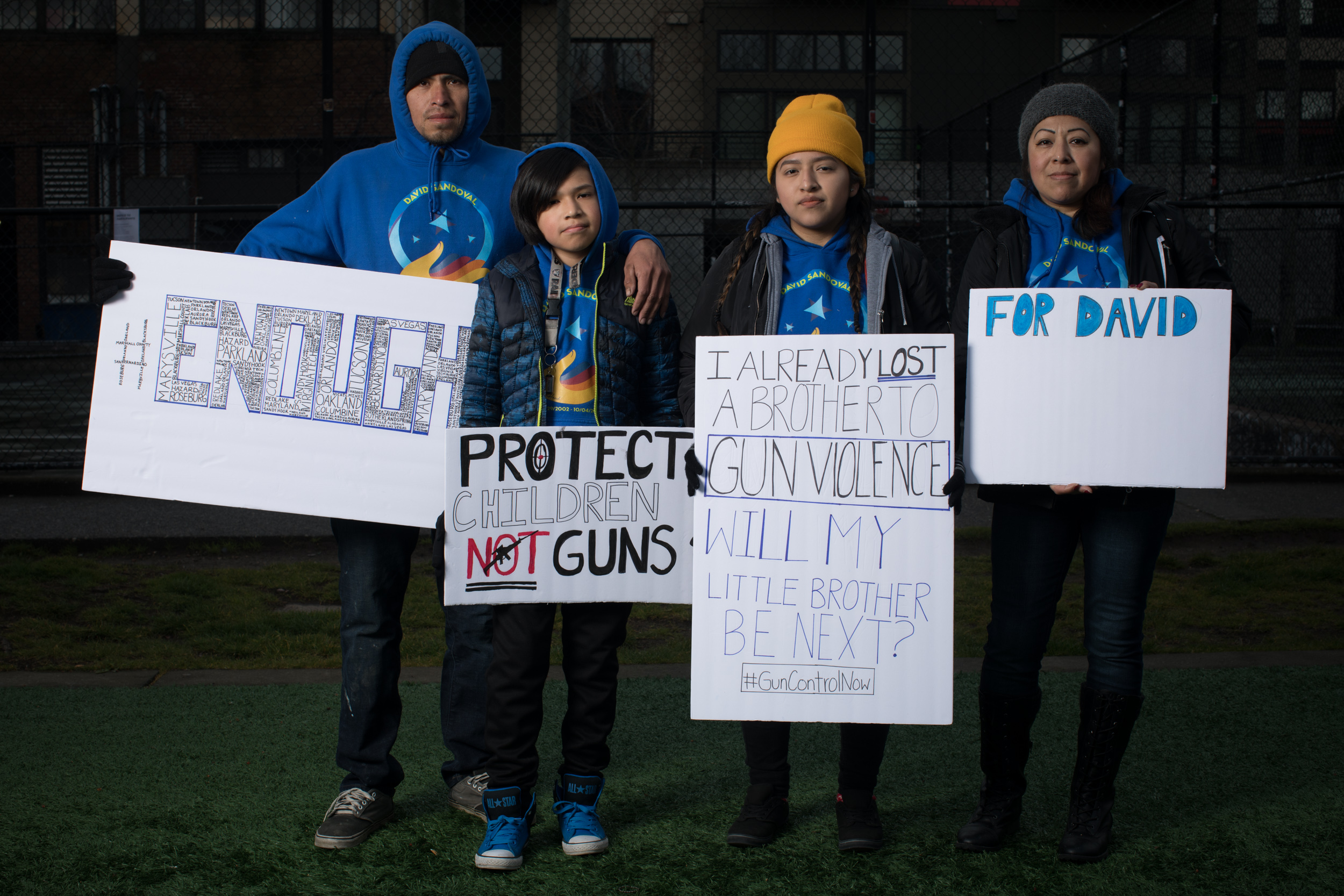 Genesis Sandoval attended Saturday’s march with her family for a very personal reason: Her brother, David Sandoval, was shot and killed last October in Everett in what police called an act of gang-related gun violence. He was just 14 years old. “We’re just here to show support,” Genesis said. She said she wants Congress to stop delaying and pass gun control laws. “They should stop selling AR-15’s to 18 year olds; the age should be 21,” she said. 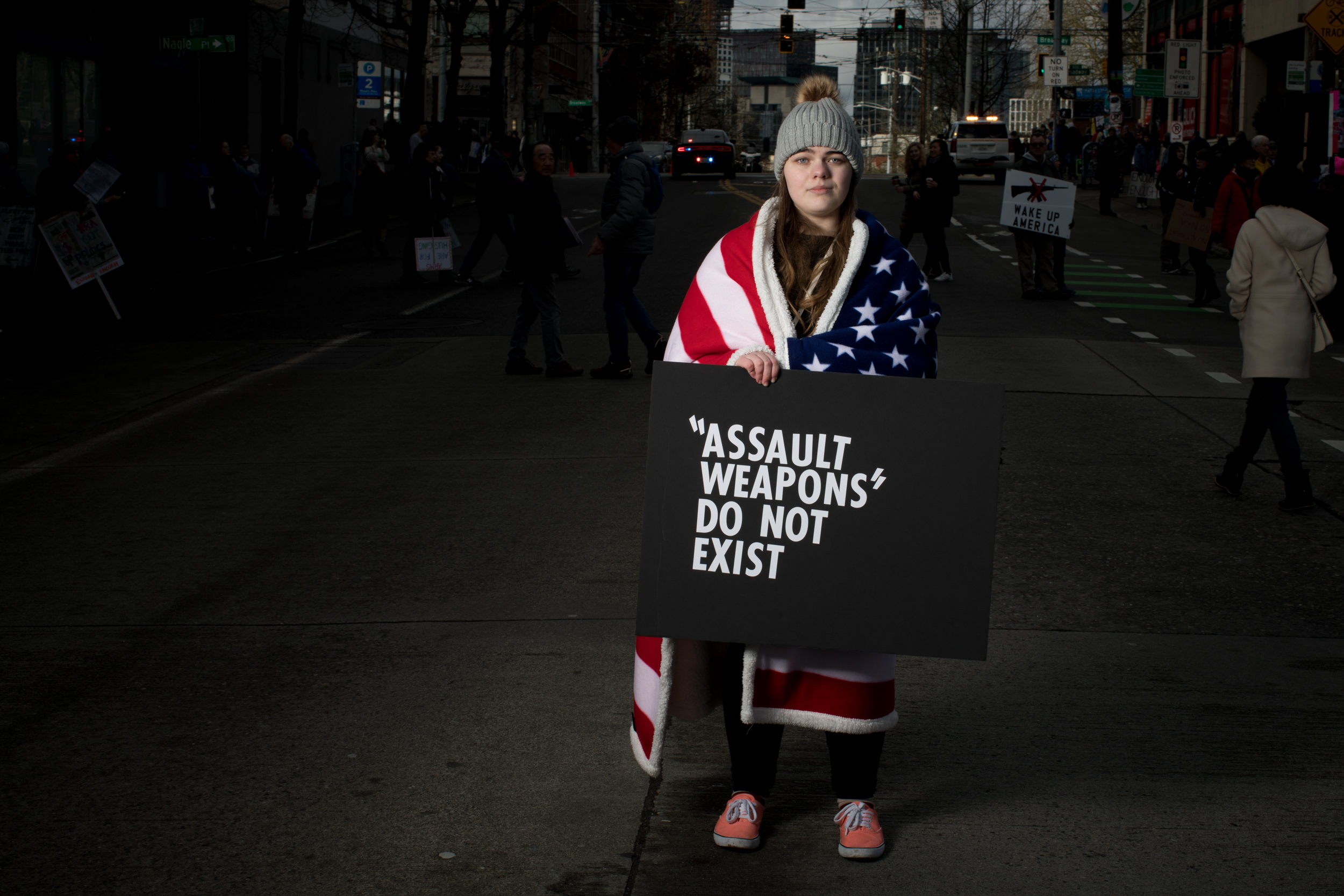 Michaela, who declined to give her last name, was one of the few people at Saturday’s march who openly supported gun rights, but she said, “I consider myself a gun-control advocate.” She supports banning bump stocks, but said the March For Our Lives activists who want a ban on assault weapons “don’t know what they’re standing for.” She said semi-automatic rifles “essentially work the same way as a pistol; you fire it once and it goes off.”

Michaela added: “What we really need to focus on is removing the stigma of getting help from mental illness and [we should] prevent people who are severely mentally ill from getting their hands on firearms. I lost my own mom to a gun-related death and that’s the most important thing that helps. It’s not about getting rid of guns.” She said the gun-control laws activists seek “will unfairly target people who are law-abiding gun owners, and besides, it’s my Second Amendment right.” 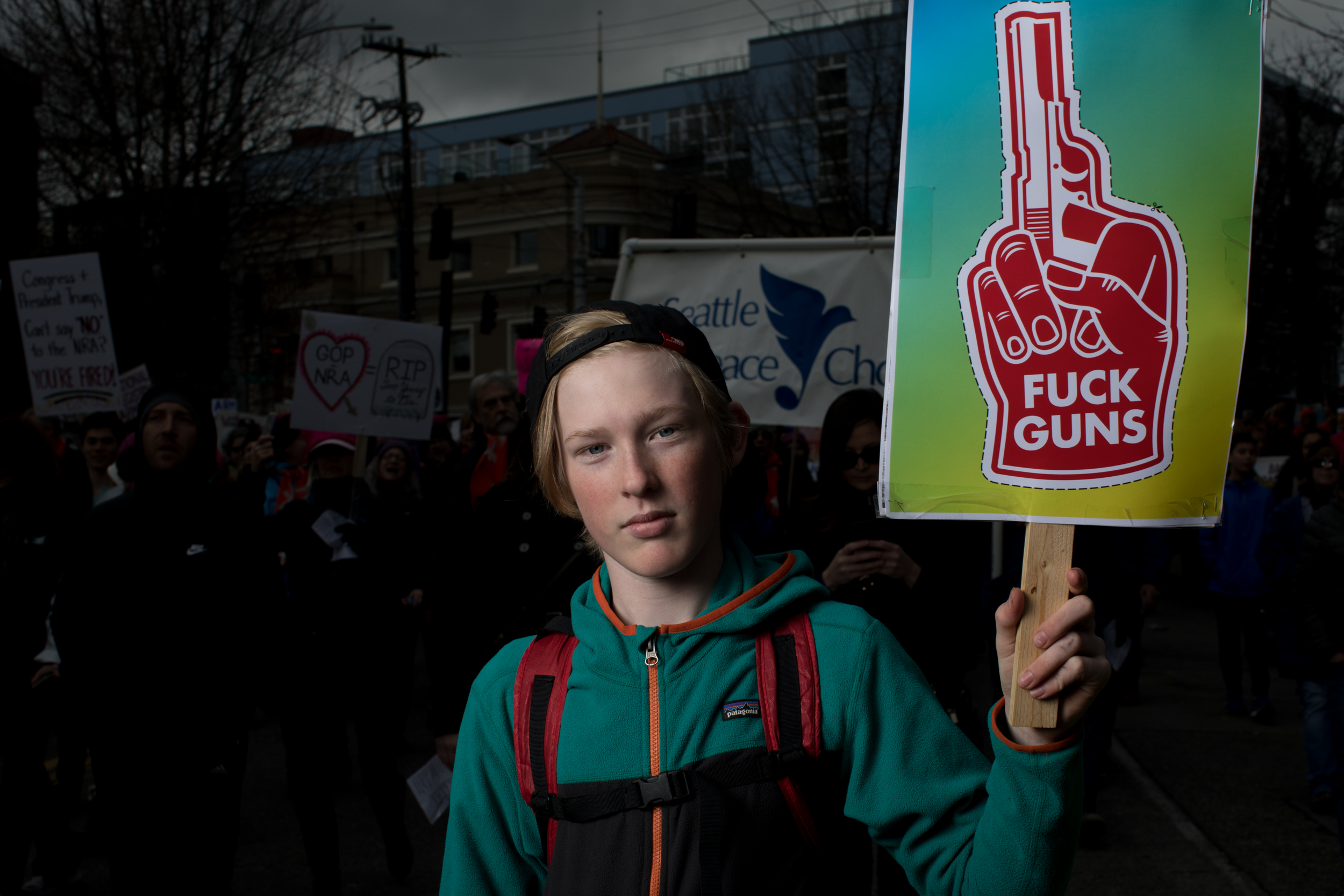 “Having shootings at schools, I just don’t really want it to happen at my school so it needs to stop,” said Tobin, who says he carries that fear with him “every day.” 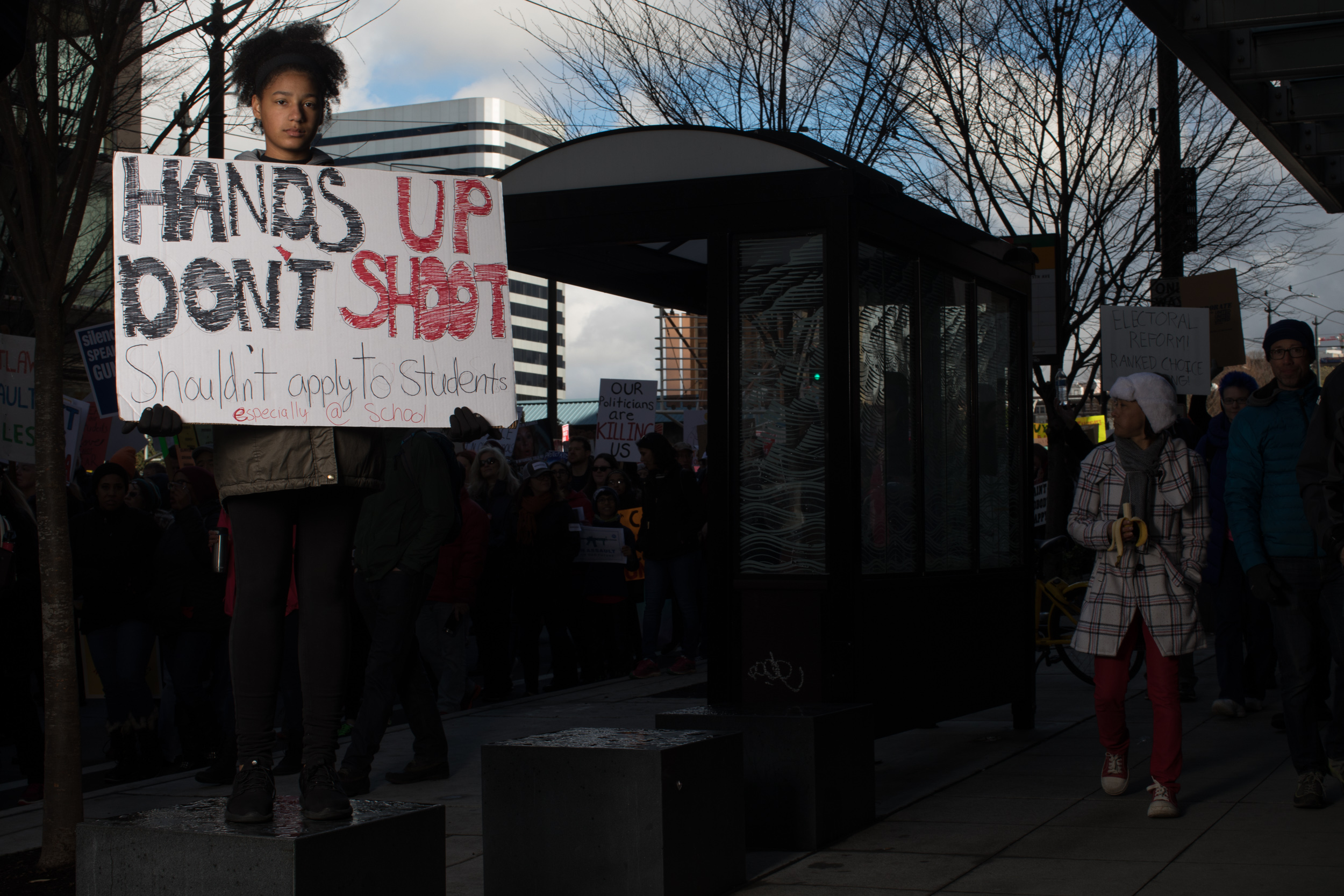 “I’m sick of going to school and hearing about a different school shooting every week,” said Sydney. Her sign for March For Our Lives — reading “Hands up, Don’t shoot” — references a protest chant used by the Black Lives Matter movement, but she said the words apply beyond that. “It also happens to kids’ lives too, kids of all races,” she said. “It’s so important for everybody to get their life, liberty and happiness. That’s an inalienable right that we’re outweighing by the Second Amendment and we just need to change that.” 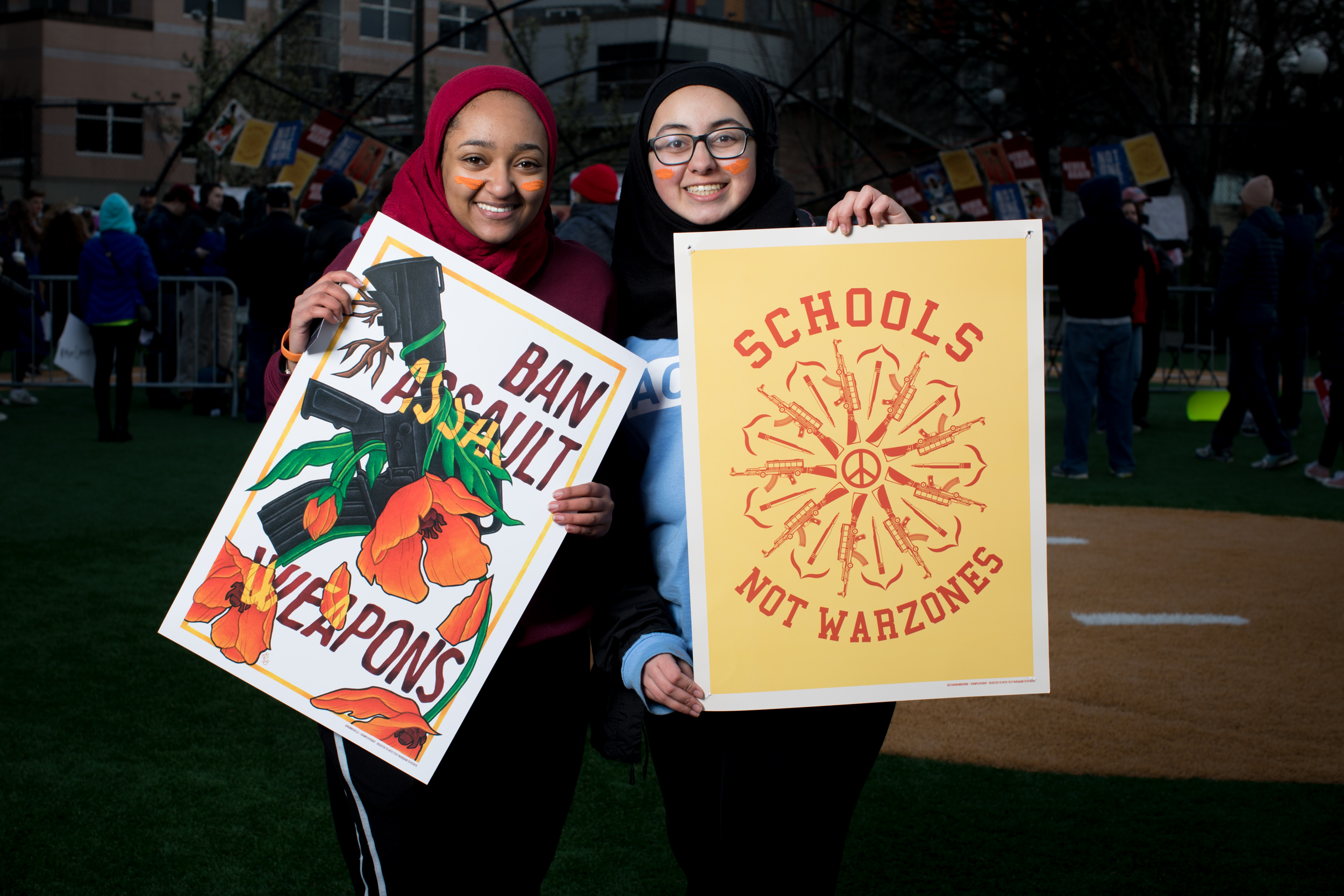 Sabreen Tuku, 15, of Issaquah, and Nabrath Sheriff, 15, of Sammamish

“We live in a day and age — especially this year, with 18 school shootings in less than three months — where it’s time for us to take a stand and stand up for what we believe in. Because if no one does it, it’s never going to get done,” said Sabreen, left.

Nabrath said, “It’s something that’s so close to home and so important to us, as students, that our only option is to take action.” Sabreen added: “Especially when we live in a time when politicians, parents and people are saying, ‘No, you’re not old enough to have an opinion on this’ or ‘No, you can’t go and do this,’ but it’s our lives that are being drastically affected by it.” 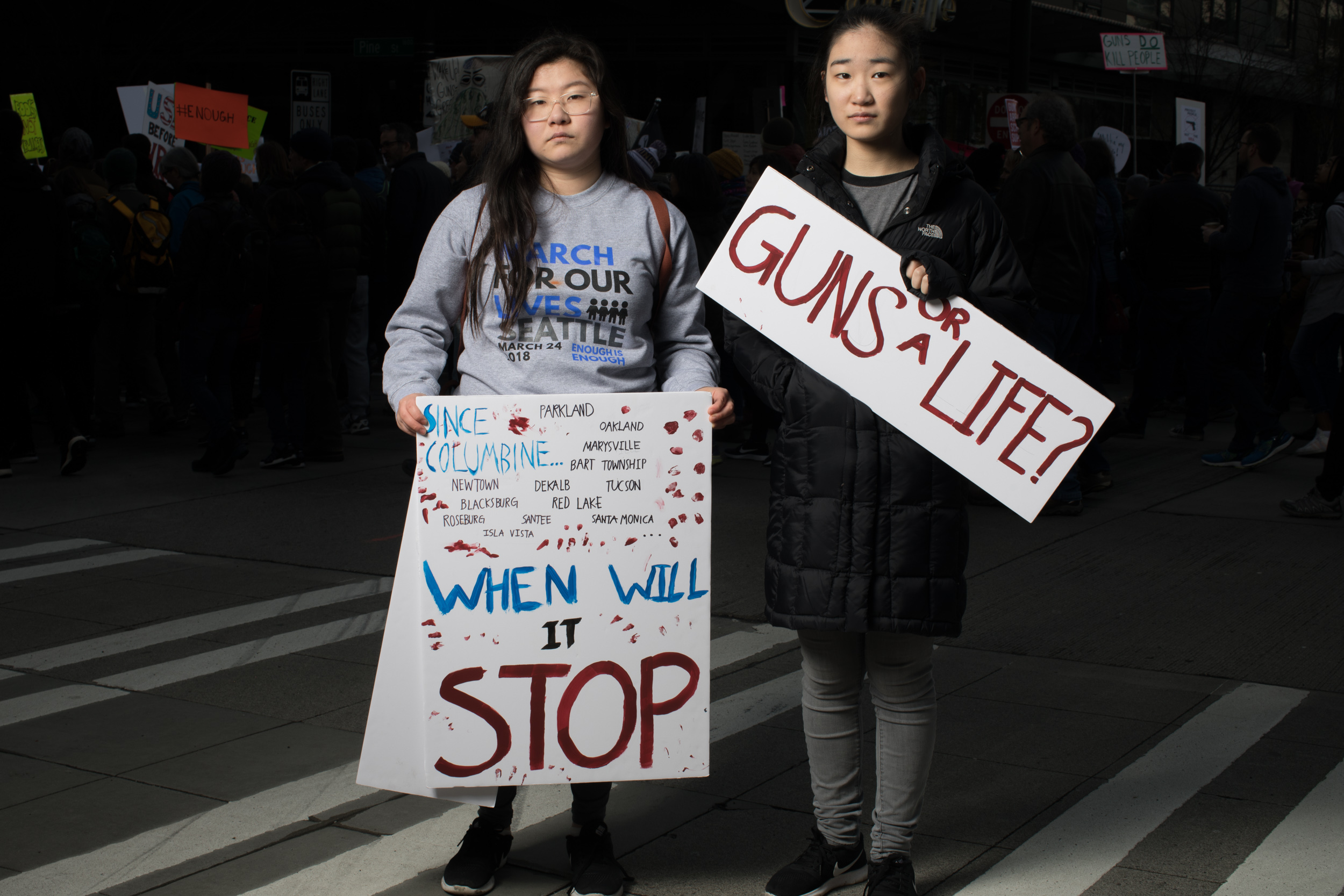 “I shouldn’t have to worry about shootings or my life being threatened while I’m at school. I just don’t think that’s right,” said Deborah, left.

Kaylin said: “I have heroic teachers at my school who have promised that if there’s a shooting they will risk their lives — and I don’t think they should have to.” 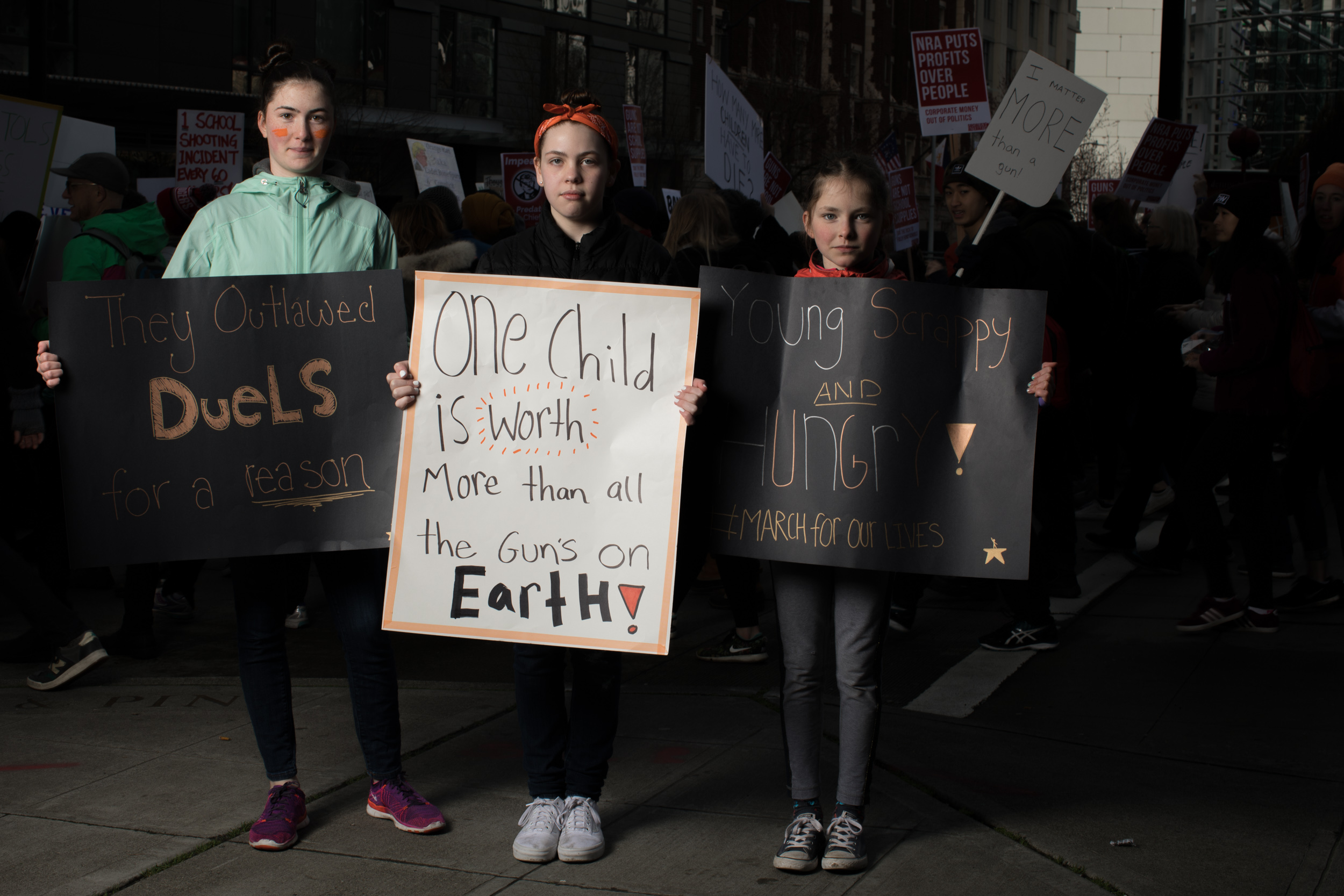 “I don’t think you should go to school and feel unsafe,” said Riley, center. She, like many of the marchers, said she doesn’t personally feel unsafe in school but she knows several classmates who do.

Abigail said she wanted to march “to make sure kids are safe at school” and she said one law she’d like to see enacted would be that “you can’t have a gun when you’re 18.” 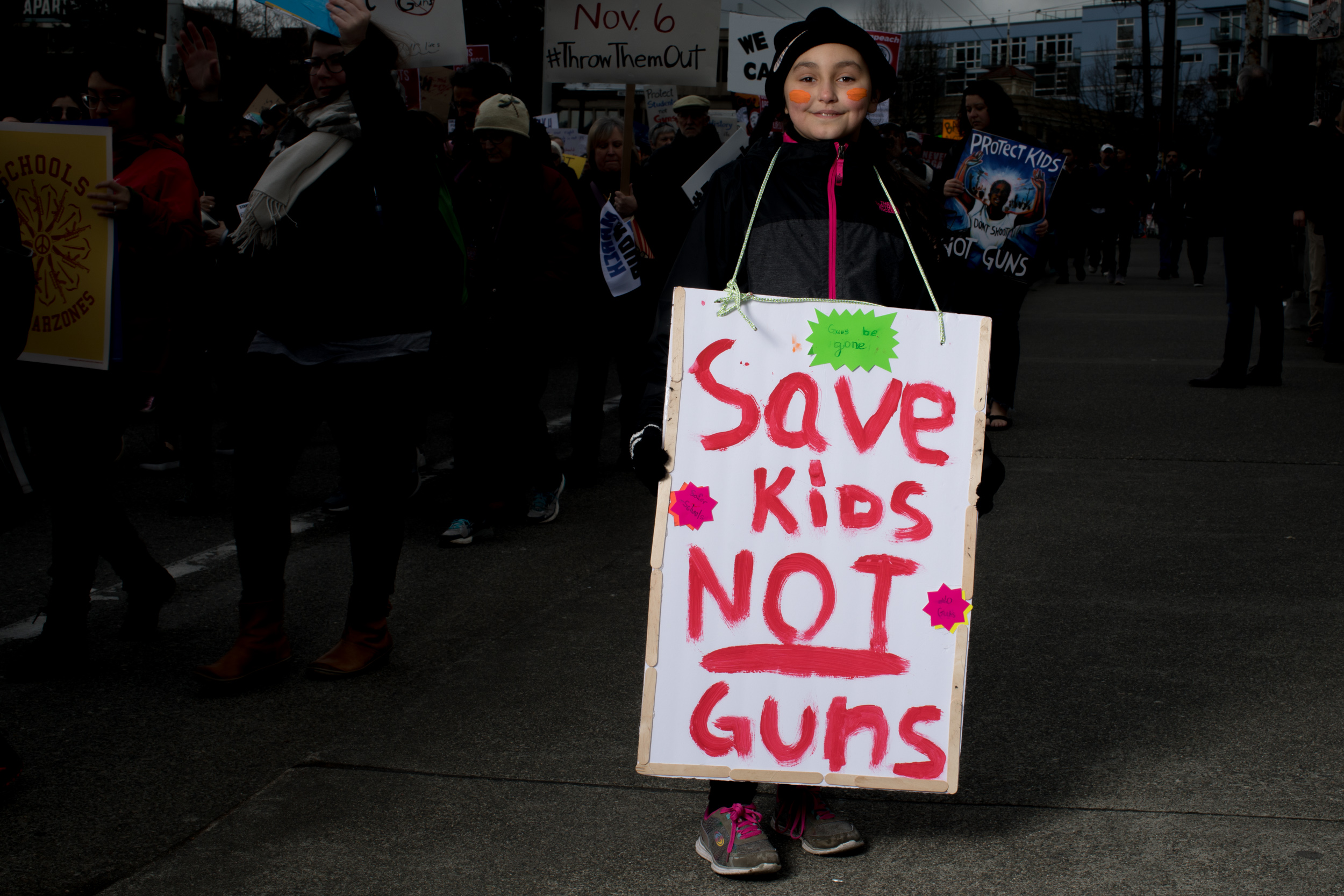 Leila spent her 9th birthday participating in the March For Our Lives. She said it was worth it because “so many kids die every single day, and it’s just sad.”

She says, “ I really love school and it’s really fun,” but “who knows? Maybe when I’m older, maybe I’ll be next. Maybe it’ll be my friends next.”