They survived the Khmer Rouge. Now some Cambodians face deportation 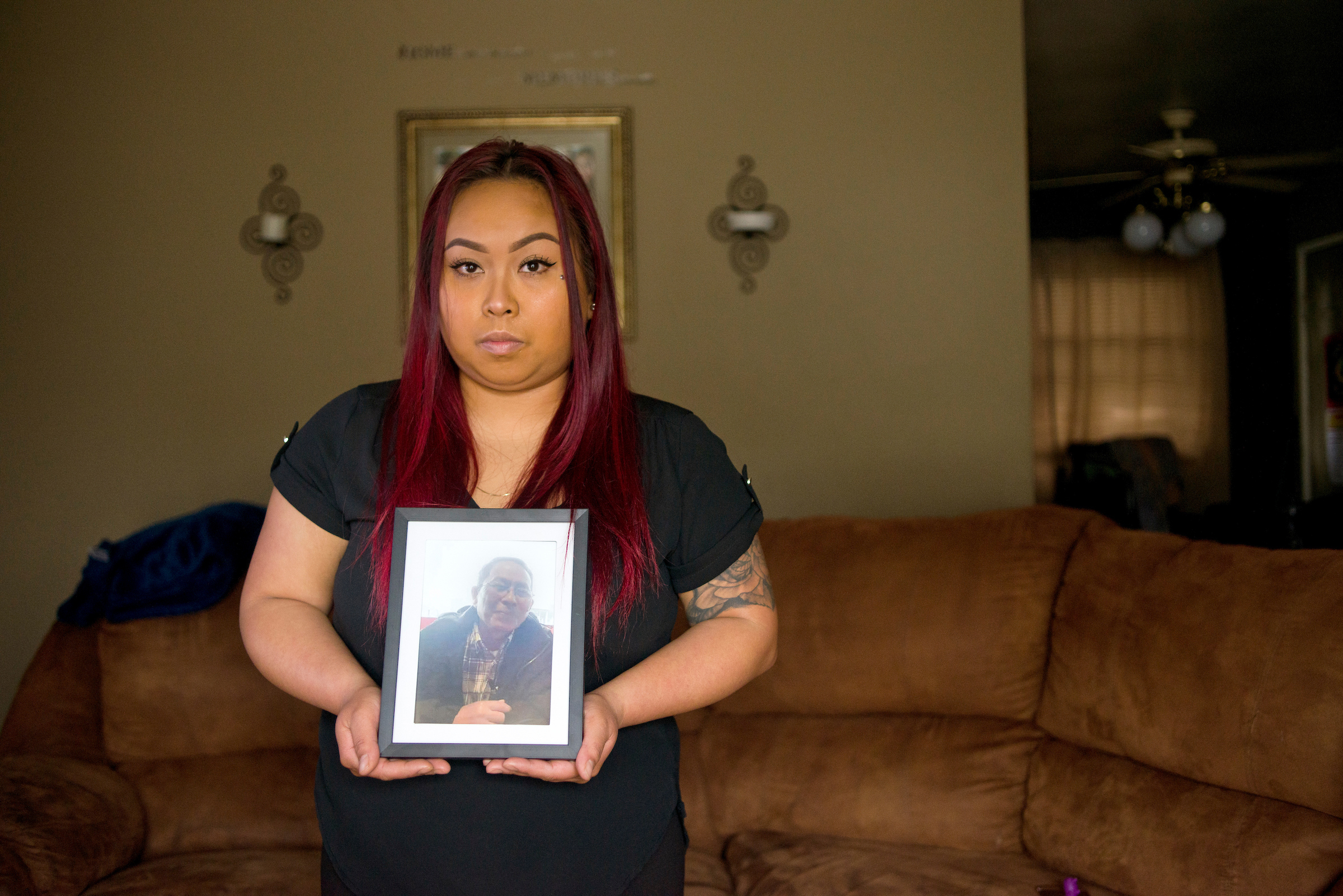 Bopha Khliu poses for a portrait with a picture of her father, Sun Khliu, taken just before his detention, at her home in Portland, Ore. on Friday, February 16, 2018. Sun Khliu is currently being held at the Northwest Detention Center in Tacoma and is facing potential deportation to Cambodia. (Samuel Wilson for Crosscut)

TACOMA — Refugees often come to the United States in possession of a backstory full of trauma, poverty and violence.

What happens, however, if upon establishing yourself in a new land you commit — or at least are accused of —  a crime? Should you be held accountable for the wrongdoing decades later, even after having paid your debt to society and you've rebuilt your life?

These are the kind of questions Sun Kim Khliu and hundreds of other Cambodian Americans are asking.

Like many Cambodians, Khliu came to the U.S. after escaping the atrocities of the Khmer Rouge regime, which claimed the lives of millions from 1975 to 1979. After living in a refugee camp in Thailand for approximately two years and spending a few months in the Philippines, Khliu arrived in the U.S. with his wife in 1980.

Nearly four decades later, the 68-year-old grandfather of 20 grandchildren now finds himself imprisoned at the Northwest Detention Center in Tacoma, one of the largest immigration prisons in the United States. He's been there since November 13, when he was detained after checking in with U.S. Immigration and Customs Enforcement. Khliu had received a letter from ICE on October 19 asking that he report to local immigration officials. He followed those orders and was promptly arrested.

Last Fall, ICE began apprehending Cambodian immigrants in Washington, Oregon, California — home to the largest Cambodian population outside of Cambodia — as well as in other states. Advocates say there’s no real logic behind the recent roundup of Cambodian immigrants like Khliu except to say that under the Trump administration, there’s a new, aggressive push to ramp up deportations.

Sophath Chou, a Bellevue immigration lawyer originally from Cambodia, said many Cambodian immigrants in the midst of deportation proceedings had green cards and “are lawful, permanent residents” but either cannot afford, or do not know how to gain access, to a good attorney.

“There’s no rhyme or reason for anything at this point.” Chou said. “It’s an uphill battle. Everything is moving really fast. As immigration attorneys, that’s what we’re dealing with.”

Every other week, Khliu's daughter, Bopha, who lives in Portland, embarks on the two-hour trek to the Tacoma prison to see her father.

On a recent Saturday morning, Bopha walked into the detention center with several of Khliu’s grandchildren. Khliu, who looks almost academic in his thin, gold-metal glasses, peered at his daughter and grandchildren from behind glass in stall #15. “I miss my family,” Khliu said, through tears, holding onto the phone dangling on his side of the stall. The grandchildren alternated between picking up the phone on their end and talking to grandpa, whose dark orange prison shirt looked too big for his small frame. Or they'd run to Bopha or another nearby adult who would wipe away tears and comfort them with an embrace.

“I love this country. That’s why I came here,” Khliu said. “I did everything they asked me to.” 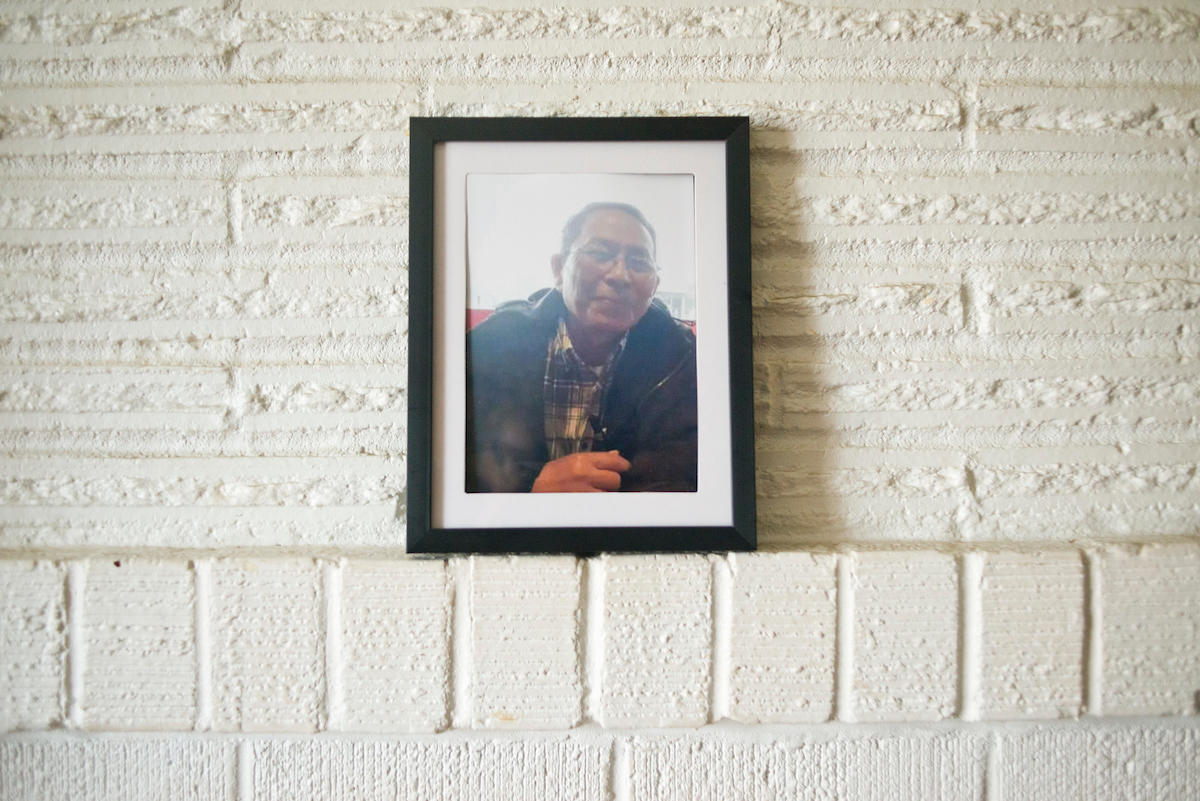 A photograph of Sun Khliu, taken just before his detention, is displayed at the home of his daughter, Bopha Khliu, in Portland, Ore. on February 16, 2018. Sun Khliu is currently being held at the Northwest Detention Center in Tacoma and is facing potential deportation to Cambodia. (Samuel Wilson for Crosscut)

A photograph of Sun Khliu, taken just before his detention, is displayed at the home of his daughter, Bopha Khliu, in Portland, Ore. on February 16, 2018. Sun Khliu is currently being held at the Northwest Detention Center in Tacoma and is facing potential deportation to Cambodia. (Samuel Wilson for Crosscut) 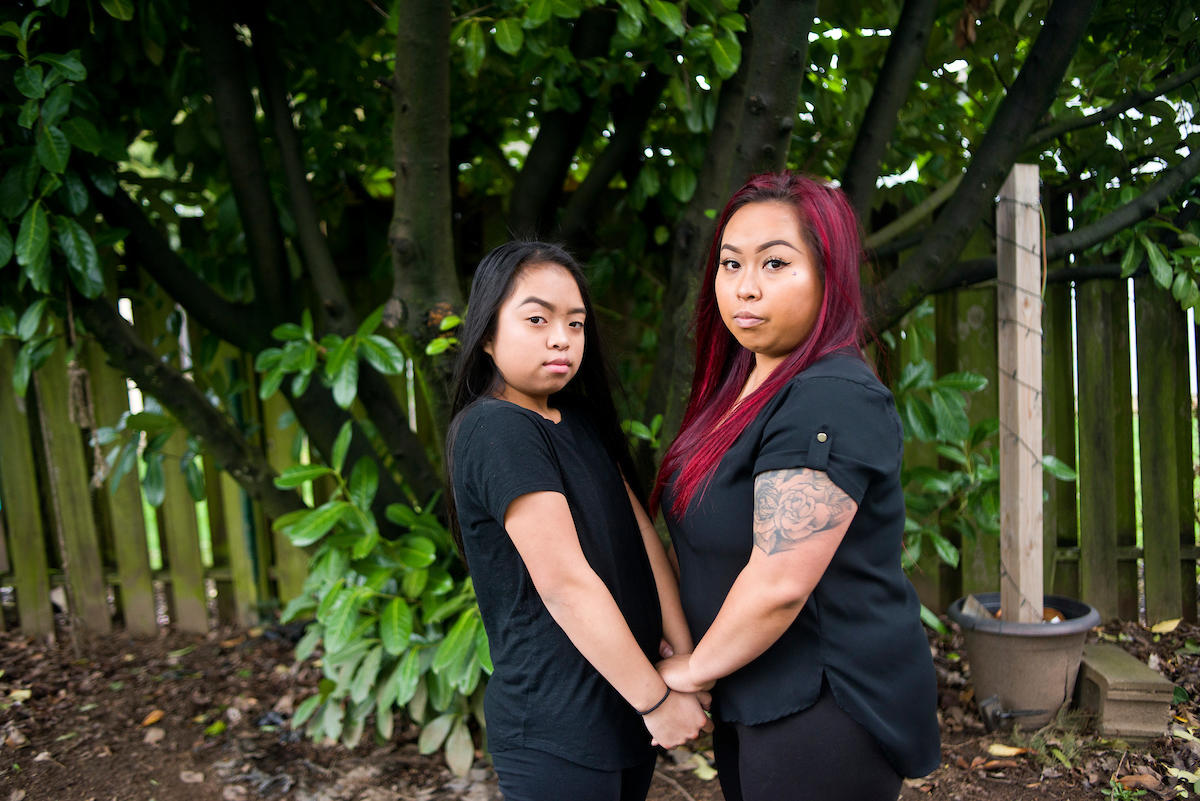 Bopha Khliu, right, poses for a portrait with her daughter, Angeliyah Khliu, 13, at their home in Portland, Ore. on Feb. 16, 2018. Bopha Khliu's father, Sun Khliu, is currently being held at the Northwest Detention Center in Tacoma and is facing potential deportation to Cambodia. (Samuel Wilson for Crosscut)

Bopha Khliu, right, poses for a portrait with her daughter, Angeliyah Khliu, 13, at their home in Portland, Ore. on Feb. 16, 2018. Bopha Khliu's father, Sun Khliu, is currently being held at the Northwest Detention Center in Tacoma and is facing potential deportation to Cambodia. (Samuel Wilson for Crosscut) 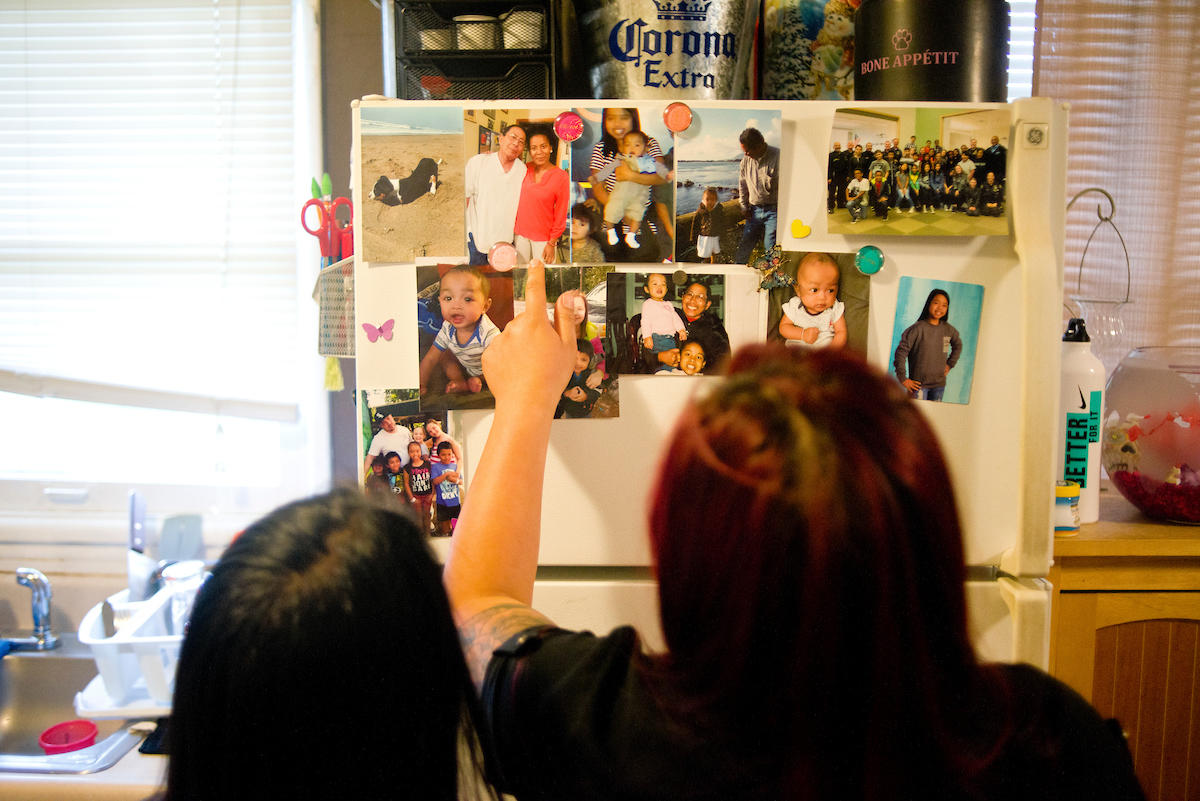 Bopha Khliu, right, looks at pictures of her father, Sun Khliu, with her daughter, Angeliyah Khliu, 13, at their home in Portland, Ore. on Feb. 16, 2018. Sun Khliu is currently being held at the Northwest Detention Center in Tacoma and is facing potential deportation to Cambodia. (Samuel Wilson for Crosscut)

Bopha Khliu, right, looks at pictures of her father, Sun Khliu, with her daughter, Angeliyah Khliu, 13, at their home in Portland, Ore. on Feb. 16, 2018. Sun Khliu is currently being held at the Northwest Detention Center in Tacoma and is facing potential deportation to Cambodia. (Samuel Wilson for Crosscut)

In 1992, Khliu struck a plea bargain and plead guilty to molesting his youngest daughter. His family insists, however, that Khliu, who speaks limited English, didn’t realize what he was admitting to and had simply followed the instructions of a public defender who promised he would be reunited with his family if he agreed to the plea bargain.

“To this day I don’t believe he did it,” said Bopha, one of her father's four children. "Everyone knows that my father would never do such a thing. It had to be a misunderstanding."

Nonetheless, because of the alleged crime, authorities continue to consider Khliu deportable.

Khliu and his wife raised a family in Portland, working various jobs, including as a supervisor at a Sheraton Hotel for approximately 10 years.

Khliu has been caught up in immigration sweeps targeting refugees with criminal backgrounds more than once.

In 2003, he served seven months in the detention center. Willamette Week reported that Khliu, the patriarch of a large Cambodian family, had been swept up in “a post-9/11 push to enforce mid-’90s immigration laws.” Ultimately, Khliu was set free and managed to stay out of trouble by checking in with ICE on a regular basis.

But advocates say the latest roundup of potential Cambodian deportees has provoked a new sense of urgency and fear. According to the Center for American Progress, as of 2013, approximately 320,000 Cambodians live in the U.S. Washington state has one of the largest Cambodian populations in the country with approximately 26,238 residents. Experts estimate there are about 1,900 Cambodian Americans around the country who are vulnerable to deportation and that 150 have already been detained.

In reaction, an ad hoc group of advocates formed last Fall in Seattle. They meet regularly with nonprofit experts, such as the Northwest Immigrant Rights Project, about how to warn the local Southeast Asian community about the threat of possible detention and deportation and their legal rights. Advocates point out that it isn’t just the Cambodian community who is in danger but immigrants from Vietnam and Laos as well. On Wednesday, for example, the civil rights organization Asian Americans Advancing Justice announced a nationwide class-action lawsuit challenging the detention of Vietnamese immigrants, many of whom came to the U.S. in the years following the Vietnam War. “Our voices were still marginalized within the larger immigration network,” said Sameth Mell, one of the leaders of the makeshift group in Seattle. When society reflects on the hardships immigrants endure, Mell said, they think of Latinos and “the Spanish-speaking population” but rarely others.

Cambodia has a complicated, often strained relationship with the U.S. For years, the Southeast Asian country refused to accept deportees. In 2002, Cambodia and the U.S. signed a repatriation agreement. The number of deportees Cambodian accepted, however, was limited.

Then last year, U.S officials reportedly retaliated against Cambodia and three other countries for refusing to accept a greater number of deportees by no longer issuing certain visas. Shortly after the sanctions, the Cambodian government said in a statement that it was “still prepared to accept its nationals ... and will try by all means to ensure that those Cambodians will be successfully reintegrated into society and begin their new lives with the fullest decency and dignity.”

On top of Cambodia accepting more deportees, Congress greatly expanded the grounds for deportation in 1996. Suddenly, any foreign national who had committed one of a broad range of offenses, even nonviolent crimes, was deportable, without an appeal or hearing before an immigration judge who might take rehabilitation or family ties into account. In other words, for refugees and many other immigrants, there would be no second chances.

Immigration advocates have tried to stem the expanded deportation effort. In November, Asian Americans Advancing Justice filed a nationwide class-action lawsuit arguing the arrests of Cambodian immigrants by ICE were unlawful and that they had been denied due process. When immigration officials detained Cambodians, attorneys argued, they failed to explain why they had suddenly been arrested despite checking in with ICE on a regular basis, or make clear why they were considered a danger or a flight risk and detention was warranted. In response, a U.S. district court judge granted a month-long temporary restraining order. In fact, in a dramatic turn of events, the court order stopped a plane packed with around 50 Cambodian Americans set for deportation from departing. But the temporary restraining order expired on February 5th.

“I anticipate deportations will pick up,” at this point, said Katrina Dizon Mariategue of the Southeast Asia Resource Action Center, a national advocacy group.

Back at the detention center, Khliu says as an older inmate, he's usually left alone. On the days the food is particularly bad, he closes his eyes when he eats. He shares his cell with other four other Cambodians, spending his days reading Buddhist texts and writing poetry.

He misses the grandchildren who he used to make sure always ate before he did.

"Everything at home is not the same without him,” Bopha says.

Asked if he’s hopeful he’ll be able to soon return home, Khliu points to the sky and says, “God knows.”