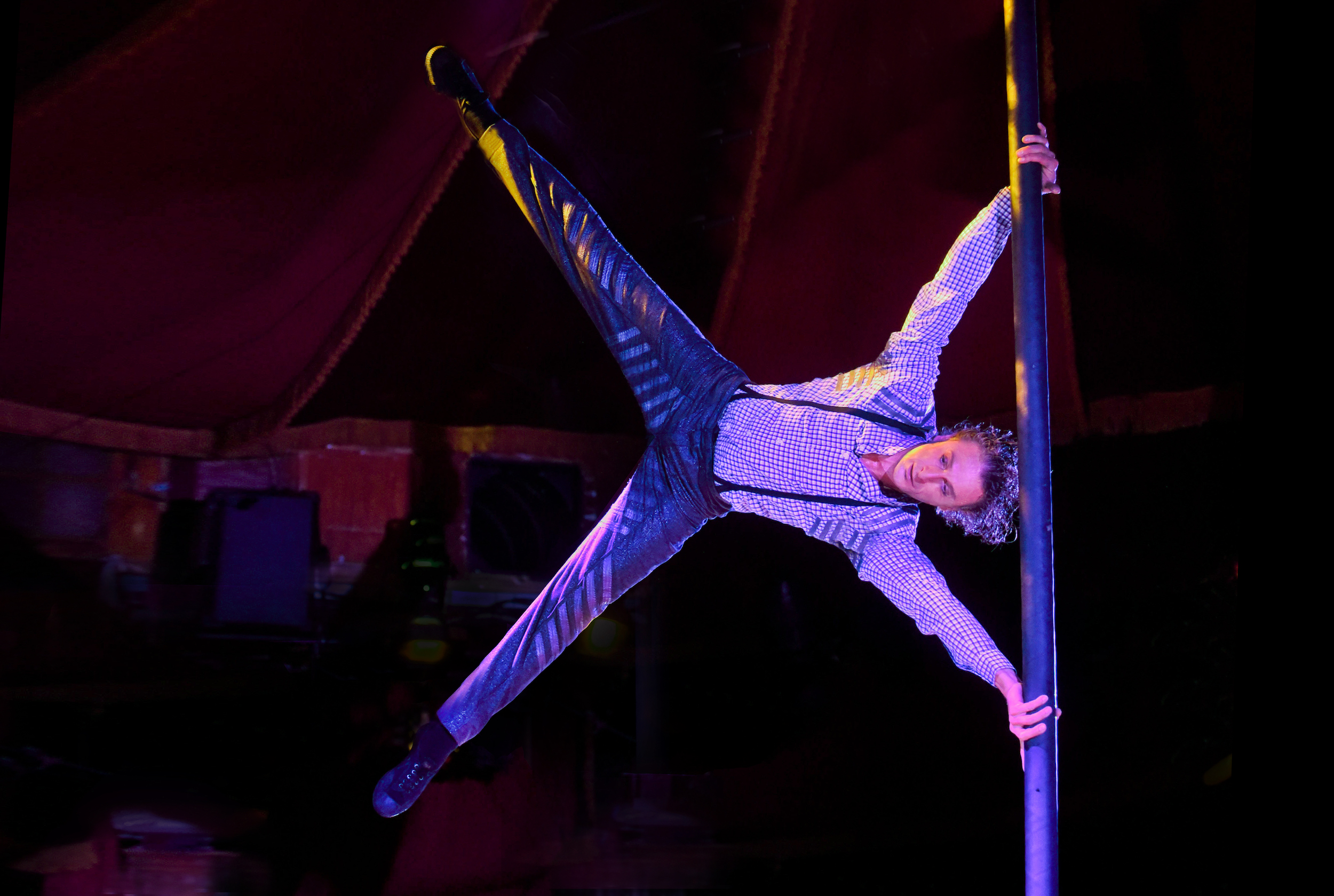 From the moment you enter the Teatro ZinZanni spiegeltent (fittingly nicknamed the Moulin Rouge) in Marymoor Park, the night holds a feeling of endless possibility. Not only is the menu, designed by James Beard award-winning chef Jason Wilson, delectable — but Teatro ZinZanni brings in talented performers from around the world. Over the course of a show, it is slowly revealed that everyone in the production is not only funny, quick on their feet and great at working a crowd, but is also an amazingly talented circus performer. In “Love, Chaos, and Dinner,” I saw the world-renowned magician Maestro Voronin make audience members’ glasses float with an effortless flick of his wrist, one of the trapeze artists in Duo Madrona hold his partner up with only his neck and in every moment felt that each performer’s talent knew no bounds. Teatro ZinZanni is known for being world-class entertainment but it is bigger than that — it is an experience of awe and delight all too rare in adulthood.

Billed as Seattle’s “best all-ages dance party,” Balkan Night Northwest showcases musicians from Serbia, Greece, Bulgaria, Croatia, Romania, Bosnia, Macedonia and Albania, all performing at three musical stages at the wonderful St. Demetrios. This year’s headliners are Greek violinist Nick Sofos and his Aegean supergroup Endasi, along with singer Eva Salina with Romani accordionist Peter Stan. In addition to dancing and music, there will be an artisan marketplace, featuring handmade textiles, instruments, and recordings. Enjoy a menu of Croatian and Greek food, as well as a bar. It’s reputed to be a lively night unlike any other.  And the Balkan love of a good party knows no bounds — after the festivities wrap up at St. Demetrios, head to the Royal Room for more entertainment from the night’s headliners.

Bertie Gregory has spent his short life traveling the world as a wildlife filmmaker and photographer, getting his start the week after he graduated from university, as an assistant to photographer Steve Winter on a National Geographic assignment in South Africa. In the four years since, the British wunderkind hasn’t stopped; he was named 2012’s Youth Photographer of the Year and has hosted his own digital series, “wild_life with bertie gregory,” traveling the nearby temperate rainforests of Vancouver Island in search of the elusive coastal wolf. He’ll be at Benaroya to share his stories and work, which aims to capture animals in their natural environment, whether that be in a city street or on an island accessible only by helicopter.

When is a portrait more than a portrait? In a fascinating new show at Foster/White Gallery, three painters — Los Angeles-based Erin Armstrong, Mexican-American Carlos Donjuan and Russia-born Julia Lambright — suggest it’s when artists feel free to pursue their visions with something more fanciful and challenging than accurate depiction in mind. In Armstrong’s work, flowers can take the place of eyes (“Of Taltuct Past”) and heads can serve as repositories for thick, rainbow-bright sediments of color (“Language of Chrome”). In Donjuan’s, a face can resemble a seamstress’s grab-bag of scrap materials (“Doll Face”) or become a polka-dot pattern (“Kinder”). In Lambright’s “Green Shoes” (inspired by her girlhood memory of a shop-window display when she was being moved from one orphanage to another), a child’s face and the shoes of the title are visible — but the explosion of apparel linking them is kaleidoscopically disorienting. Armstrong says she’s exploring “the ability of the mind’s eye to render a non-reality.” Donjuan, brought to the U.S. illegally at age 3, takes on “the pejorative term ‘alien’ and looks to playfully appropriate its meaning.” Lambright addresses “the inadequacy and impermanence of memory.” It all adds up to a heady, genre-stretching show.

Tori Karpenko: “Inside the Liminal”

There’s no such thing as perfect square or rectangle in nature — so why should painters be limited to squares and rectangles when it comes to framing their work? In “The Lookout,” his 2015 show at Traver Gallery, painter Tori Karpenko’s brilliantly perspective-altering takes on Cascade Mountain landscapes were traditionally framed. In his new show, “Inside the Liminal,” he’s painting on curved lozenge-shaped panels that bring an immersive warp to what you’re seeing. His titles — “The Door That Makes No Promises,” and “Illuminate the Drift” — echo the visual puzzles he creates. The show’s most striking work, “Find Something Pure (Eclipse Part 2),” takes things right off the wall and sits them on a pedestal, transforming the painting into a bentwood hammock or lounge chair as it places a rocky stream and forested ridge in seamless yet impossible relation to each other. Amazing work, and a major leap forward for Karpenko.

At Linda Hodges Gallery, two curious new shows by Seattle artists are well worth checking out. Found photographs inspire artist Justin Duffus’ oil paintings, while parental attendance at kids’ sports events triggers a hypnotic series of monotypes on paper by Klara Glosova. In Duffus’ hands, ordinary sights go blearily or bizarrely wrong. Best example: “Maypole,” a party scene in which businessmen (one of them actually is the maypole of the title) jokily engage in a pagan rite while women watch from the sidelines. Duffus has fun with paint-smear aberrations and some deliberately sour color ideas that take you into strange territory indeed. Glosova creates quieter themes and variations in her beguiling prints, though there’s something mysterious at play in them. Each solitary figure faces away from the viewer — and the “games” themselves are mere abstract renderings of sports-field colors. Haunting stuff.

ArtSEA: Stolen and scrapped, Seattle’s Arboretum gates are back

Plus: Tsutakawa sculptures on Bainbridge Island and a range of mountain art.