UW could become 6th campus nationwide with a postdoc union

Some 200 postdoctoral researchers and their supporters packed President Ana Mari Cauce’s office to demand a union vote. On Thursday, they got what they wanted. 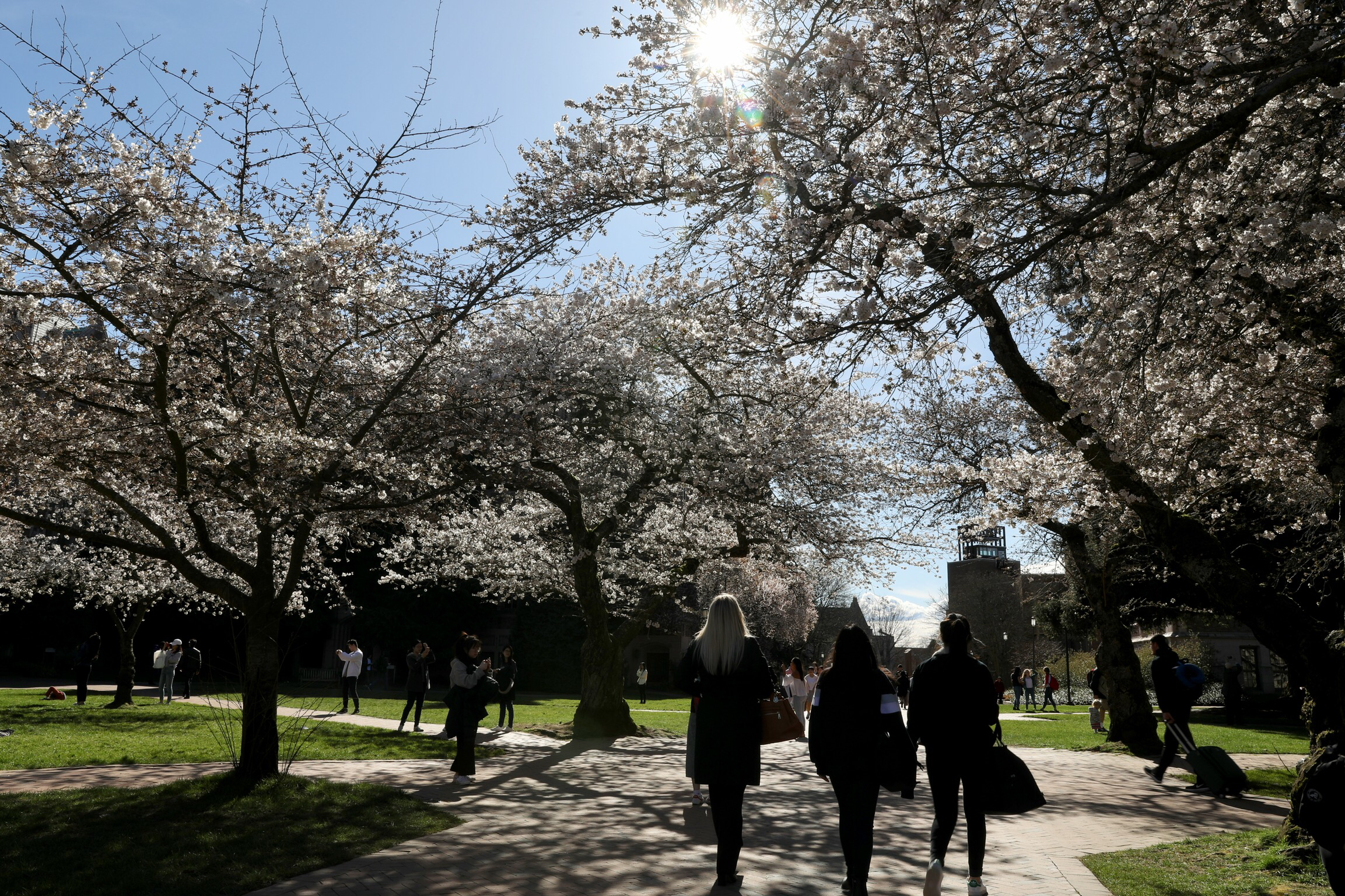 People walk amid blooming cherry blossoms trees during a sunny afternoon on the UW Quad in Seattle on March 15, 2018. (Photo by Matt M. McKnight/Crosscut)

Midday Thursday, on the heels of a “work-in” staged the day before by University of Washington postdoctoral researchers in the office of President Ana Mari Cauce, the UW administration agreed to allow a vote to form a union — paving the way to a first-of-its-kind bargaining unit in Washington state. The decision comes five months after a majority of some 1,100 postdocs delivered union cards to a state labor board, a major step toward unionizing.

The union push, dubbed “Postdocs United,” has centered on concerns over insufficient pay in an expensive city, weak parental leave policies, a lack of affordable childcare and lackluster grievance channels. The especially precarious condition of international postdocs — many of whom arrive on visas known as J-1’s and, by virtue of regular one-year research appointments, can sometimes face acute uncertainty — has fueled organizing efforts, too.

Also lurking in the discussion: The growing focus nationally on sexual harassment and the influence of sexism in disrupting women’s lives and careers.

Union drives have played out among non-tenured adjunct faculty at both UW and Seattle University to little success. But postdoc researchers hope to buck the recent trend and join their graduate student peers, who are unionized with the International Union, United Automobile, Aerospace and Agricultural Implement Workers of America (UAW). The UW postdocs — researchers who already hold doctorate degrees — are important contributors to some of the Puget Sound region’s major economic engines, including computer and life sciences.

Currently, postdoc unions exist on only five other campuses across the country, including the University of California system. The union there — which has seen success in negotiating a better insurance package and a higher minimum salary scale — is also affiliated with UAW.

Carolyn Brotherton, a postdoc in UW’s Department of Microbiology, got her start in union-organizing while in graduate school at Harvard University, where unionizing efforts were fought tooth and nail — and so far, successfully — by that administration. Dismayed by her experience at Harvard but soon energized, her union work at UW has focused on the need for reform in higher education.

Brotherton says that the administration under-appreciates the voices of postdocs — a group of academics who experience high turnover and tend to delay higher earnings at a time in their lives when many people decide to start families.

But of particular concern to her is what she says is a culture of sexual harassment that exists in academia. Brotherton argues that “avenues for reporting harassment are obscure.”

“We don’t get much support at all,” she says.

A union, she thinks, could help move the needle on this and other issues.

Since last October, the UW administration resisted scheduling a formal vote, arguing over the eligibility of some proposed members to be included in the bargaining unit. A letter from Cauce, penned Oct. 11, argued that postdocs who also hold job titles such as “research associate” or “research associate trainee” were considered faculty — a class of employees granted collective bargaining rights under a longstanding state law that specifically excludes postdocs. Instead, postdocs are covered under a different section of the law, enacted in 2012, which does not spell out the definition of postdoctoral workers.

The distinction is somewhat difficult to parse, but a March 1 ruling in favor of Postdocs United by the state Public Employment Relations Commission acknowledged that they hold faculty positions but it also said they are “indisputably postdoctoral employees,” granting them standing under the 2012 law.

The ruling led to several bouts of ping-ponging as both the union supporters, represented by UAW 4121, and the university attempted to reconcile who should be included in the bargaining unit. In the president’s office on Wednesday, a representative of the administration insisted that postdocs who hold dual titles be carved out.

“The claim is bogus,” says Brotherton, who holds the title of senior fellow. “We’re not going to carve people out. We want to be as inclusive as possible.”

On Wednesday, with pressure mounting as nearly 200 people filled Cauce’s office and after several local leaders — including Seattle City Councilmembers Teresa Mosqueda and Kshama Sawant — issued statements supporting the postdocs, one of them, Michelle Tigchelaar, was invited into an office to meet with Margaret Shepherd, UW’s chief strategy officer.

By Tigchelaar's account, Shepherd said that she had contacted the president, who was willing to move ahead with the vote if the union supporters agreed to drop the disputed employees from the bargaining unit. The university claimed these employees amount to around 130 proposed members; union advocates argued it was closer to 30, but nevertheless refused to compromise.

At noon Thursday, Postdocs United learned that the university would not appeal the labor commission’s ruling from earlier this month. In a message to Crosscut, UW spokesperson Victor Balta said the university looks forward to bargaining with the unit in good faith, should the election be successful. But, he said, they still intend to dispute some proposed members with “faculty titles and ‘dual’ titles.”

Tigchelaar suspects that these latter employees are mostly people in the School of Medicine who are M.D.’s or M.D.-Ph.D.’s currently conducting research and who may do some clinical work, which can be billed to the university. But she said she couldn’t confirm for sure without seeing the university’s list.

The university didn’t immediately respond to a question about which departments these employees work in.

Tigchelaar, who researches in UW’s Department of Atmospheric Sciences and received her Ph.D. from the University of Hawaii at Manoa, has been active in the union efforts since September 2016. She, too, has been motivated by what she calls “a strong academic version” of the revelations fueling the nation’s current reckoning with sexual assault.

“Over the course of my Ph.D.,” she says, “I’ve heard so many stories of people being harassed or worse by their professors or people they’re in the field with and not daring to speak up about it ... or not feeling empowered to act.”

While she speaks positively of her department, Tigchelaar says she has heard troubling stories about harassment incidents in other departments at UW.

“Having a contract ... and a network of people that you know will stand with you when you to decide to take action — I think that will be huge,” she says.