When lockdowns are ‘normal,’ teens say it’s time to march

Seattle’s March For Our Lives could draw 50K on Saturday. 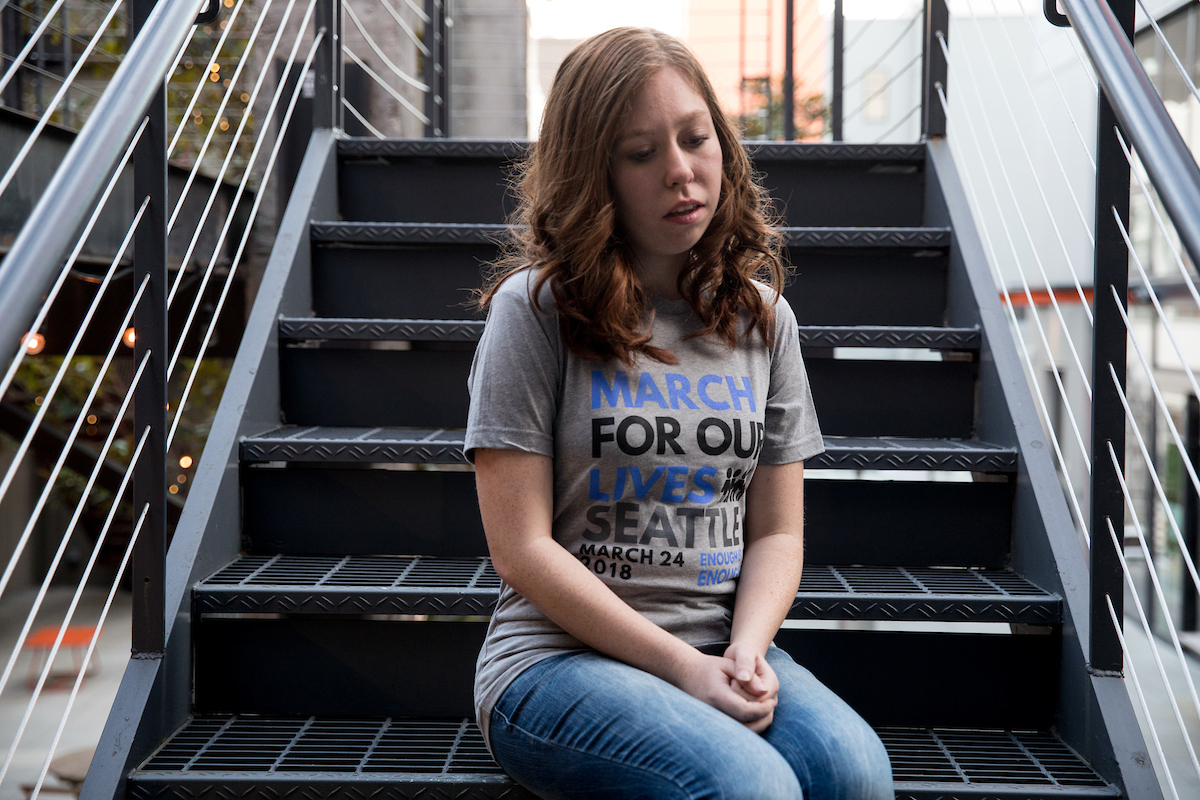 Katalia Alexander, an 18-year-old senior at Mount Rainier High School in Des Moines, sits for a portrait outside Cupcake Royale in Capitol Hill on March 20, 2018, where she and other organizers were planning Seattle’s March for Our Lives. The event is March 24 through downtown Seattle. (Photo by Matt M. McKnight/Crosscut)

For Rhiannon Rasaretnam, it’s the future of her little sister, Dylan. For Emilia Allard, it’s the life of her four younger sisters, and one in particular: Charlotte. For Katalia Alexander, it’s the all-too-real potential that she could have lost her best friend a month ago in what mercifully turned out to be a false alarm.

The high school seniors know all too well that a school shooting could still happen to them. Just as easily and abruptly and tragically as it happened in Parkland, Florida, last month or in Newtown, Connecticut, six years ago.

They’ve prepared for years with “active shooter” drills and lockdowns that have been a routine part of their upbringing in a post-Columbine world. They’ve grown to somewhat shrug off mass shootings with the same ­­desensitized apathy as much of the rest of the country. But, this time inspired by the Parkland students, they say: No more.

On Saturday, these teenage students-turned-activists from metro Seattle will join the worldwide March For Our Lives. They’re taking a stand to give their siblings and friends and younger classmates a different future.

“I have a little sister in the sixth grade, so she still has six more years in the school system,” Rasaretnam said of Dylan. “I don’t want her to be growing up in this society where gun culture is normalized, and she has to go into these active shooter drills and be afraid when she’s going to school in the morning.

“I just want to change our society to the point where all these young students growing up don’t have to go through the same process that my peers and I did,” she said.

March For Our Lives originated with the teenage activists from Parkland who are convening a primary march in Washington, D.C. Simultaneously around the globe, some 800 sister marches — including Seattle’s and several others around the Puget Sound area — will also call for politicians to change laws to improve school safety, stop mass shootings and end gun violence.

Seattle’s march is anticipated to draw around 50,000 people as it winds through downtown, from Cal Anderson Park on Capitol Hill to Seattle Center, beginning at 10 a.m.

“My biggest long-term goal would be to not have this march be a singular day where we all go out and scream about gun control because that’s not enough,” said Allard, an 18-year-old senior at Seattle’s Ballard High School. She and Rasaretnam are lead organizers of Saturday’s Seattle march. “We need more than that. We need to start having these conversations about sensible gun control but then actually doing things to implement that.”

Just this week, Rasaretnam, 17, participated in a lockdown drill at Tahoma High School in Maple Valley. The senior said it’s natural to talk about school shootings “with our parents, with our teachers, with our friends … because, of course, we have to know how to defend ourselves if a school shooter comes in.”

Such conversations and the routine drills, she said, are her generation’s “normal.”

But lately, Rasaretnam says she’s been struck by the cruel reality of lockdown drills: “It’s just really hard when we’re having these conversations about how to position ourselves in a way that most students won’t be hit. But we all know that it’s inevitable that some kids would be shot and even killed” if a shooter broke through the classroom door.

“As a high schooler, it gives me the chills and I can’t imagine what these elementary and middle school kids are thinking” as they practice the same drills, she said.

For Allard, last month’s tragedy in Parkland sparked a painfully real topic of conversation with her mother — what might happen if her younger sister, Charlotte, was in a school that was under fire.

“Just coming to terms with the barriers that would be stacked against my own sister if she were to be in a school shooting,” Allard continued, “I just realized that — obviously, I care about Charlotte a lot; she’s my sister — but I also care about the other 25 kids in that room that she would be putting at risk. She’d be putting herself at risk. And it’s not her fault and she shouldn’t be in those situations.”

In the days after Parkland, both Allard and Rasaretnam created social media pages for a Seattle March For Our Lives.  They quickly teamed up and brought together dozens of student volunteers from Seattle and its suburbs.

Massive thank you to everyone who came to our volunteer orientation last Saturday! The first picture shows most of our 450 registered volunteers!!! And another big thank you to @terraplataseattle, @cupcakeroyale and @gnocchibarsea, who donated food for the meeting and Garfield High School for letting us use their space to get work done!! #mfol #gunviolence #guncontrol #marchforourlives #marchforourlivesseattle

A post shared by March For Our Lives Seattle (@marchforourlives_seattle) on Mar 7, 2018 at 5:48pm PST

One of those is Katalia Alexander, a senior at Mount Rainier High School in Des Moines.

“Parkland hit me hard,” she said, but it was something that happened two days later less than a mile from her home that rocked her into action.

The 18-year-old recalled how, on Feb. 16, her best friend texted her from Highline College after reports of possible gunshots on campus put the school on lockdown. Alexander remembers hearing police sirens blare for minutes on end as they descended on the campus nearby.

“If that had been real, there was nothing I could have done in that moment to save my best friend’s life,” she added. “It really just made me realize that we can’t wait until something happens to do something about it; we have to do something before it happens.”

The students started a GoFundMe page to raise $60,000 for portable bathrooms, police barricades, staging and other costs associated with putting on Saturday’s Seattle march. As of mid-afternoon Wednesday, they had raised more than $28,000.

Tuesday night at the Cupcake Royale on Capitol Hill, a half-dozen student-organizers gathered in what was the latest of a string of meetings to make final preparations for the march. The store manager fed them free cupcakes adorned with the March For Our Lives logo.

Saturday’s march, said Rasaretnam, marks the start of a “huge movement” of youth activism that extends beyond gun control. “Racism, sexism, the environment. I think this is a catalyst for all of these students to realize that they do have an impact, they do have a voice.”