Another day, another clash over homeless encampments 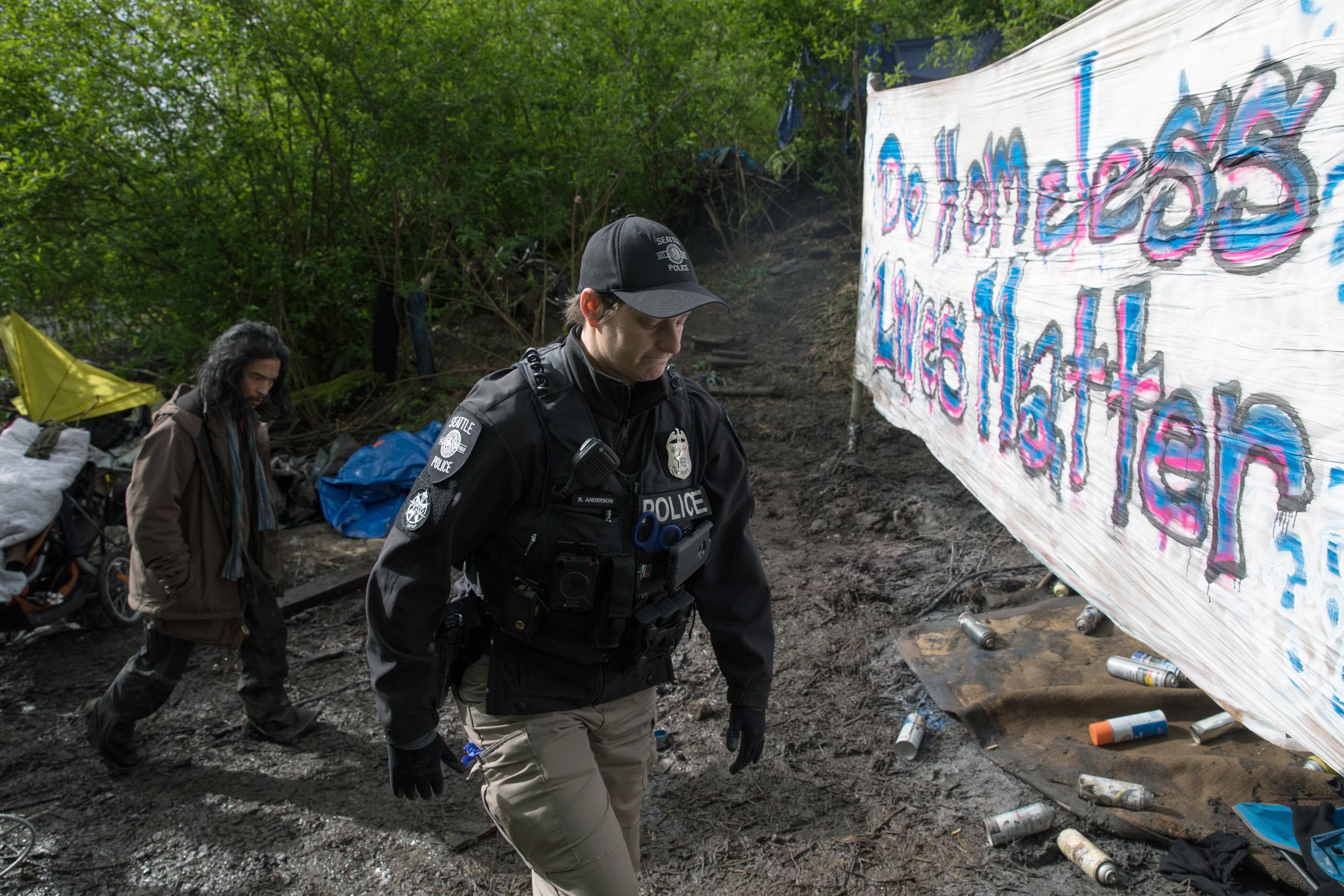 A Seattle Police Department officer walks into the encampment with resident Tidus Nadella, during a sweep of the Ravenna Woods homeless encampment near Seattle's University Village neighborhood on April 17. (All photos by Matt M. McKnight/Crosscut)

It only took about ten people to block the road into Ravenna Woods on Tuesday morning, where residents of a small cluster of tents and makeshift shelters had slept the night before. But with locked arms, the gathering of activists was enough to delay a line of police cars and city employees, set to fulfill the near-daily task of clearing out unsanctioned homeless encampments.

Ravenna Woods is feet from the Burke-Gilman Trail near the University of Washington. It’s a public park and, off and on for months, home to temporary occupants. The wooded, muddy area has been cleared several times before.

But since it was last swept in December, people have returned in short order. One man, Charlie Blackwood, built a lean-to shelter with a latching door and electricity from a nearby neighbor. Feet from a sign that read, “Do Homeless Live Matter?” Blackwood’s shelter was fully lit with exposed bulbs. He didn’t want to say who was giving him the power hookup, but said it was legal.

The cycle of emptying the same place, often with some of the same people, has been met before with a similar cycle of protests. Ravenna Woods, in particular, has been cleared at least twice before. Each time with outrage from activists who feel the encampment is sufficiently out of the way and shouldn’t be targeted.

It’s a cycle that has repeated itself in recent years and throughout Seattle as the homeless population has increased and the city has sought to funnel people into shelters. 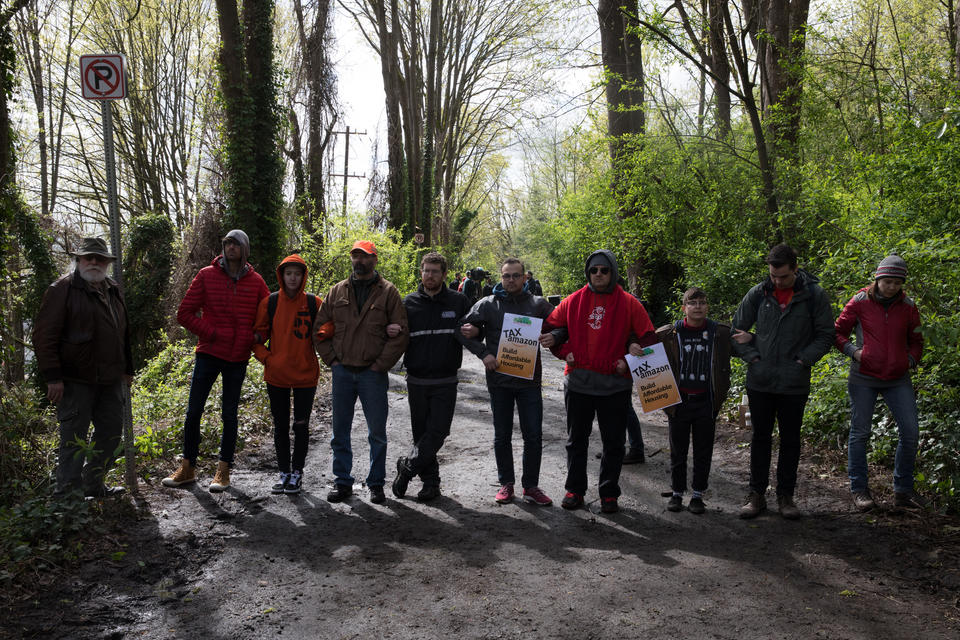 Protesters gathered on an access road to prevent the Seattle Police Department from entering during a sweep of Ravenna Woods homeless encampment near Seattle's University Village neighborhood on April 17. 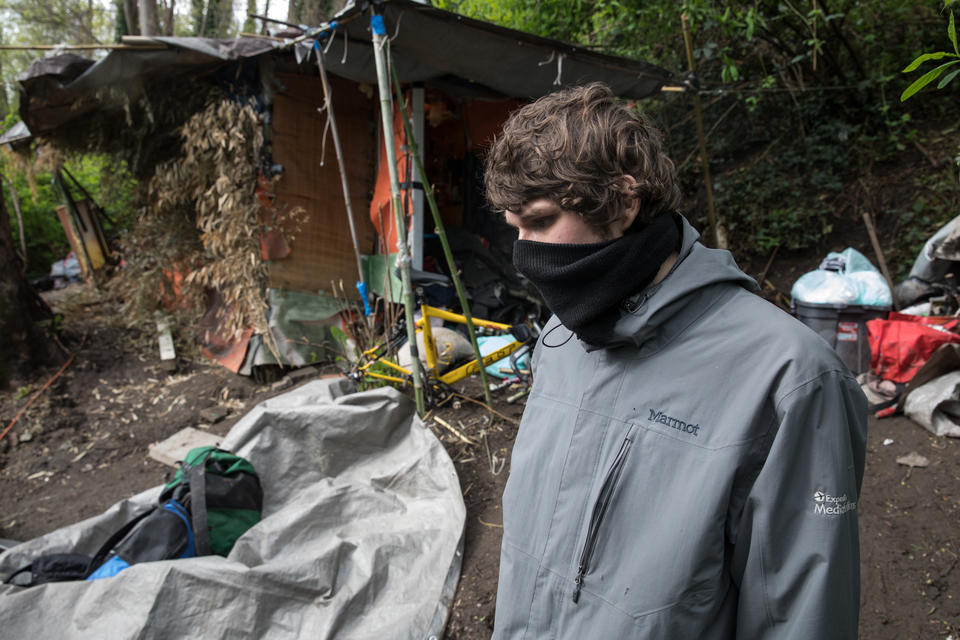 Resident Charlie Blackwood stands outside a structure during a sweep of Ravenna Woods homeless encampment near Seattle's University Village neighborhood on April 17. 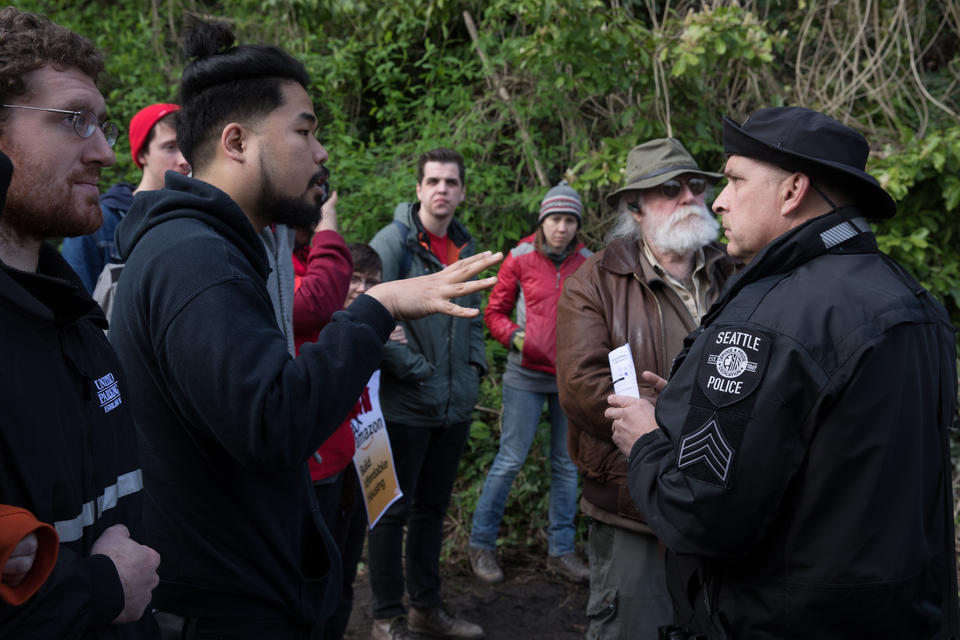 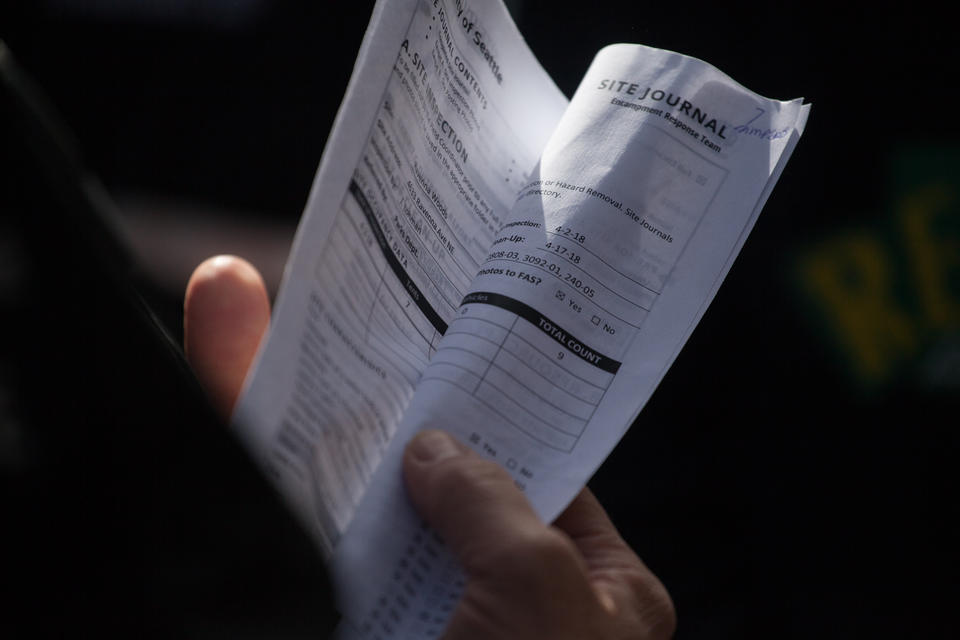 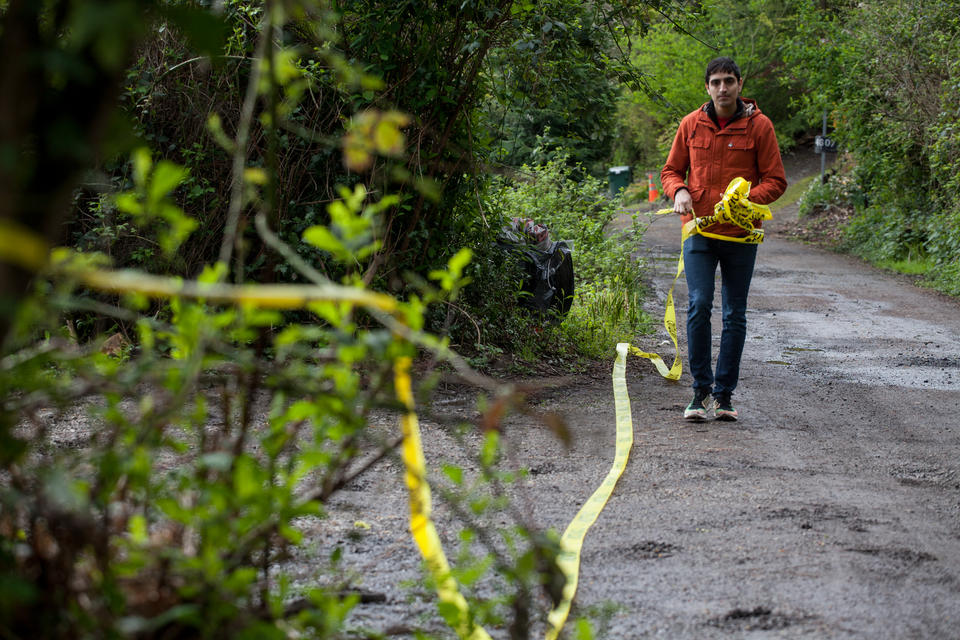 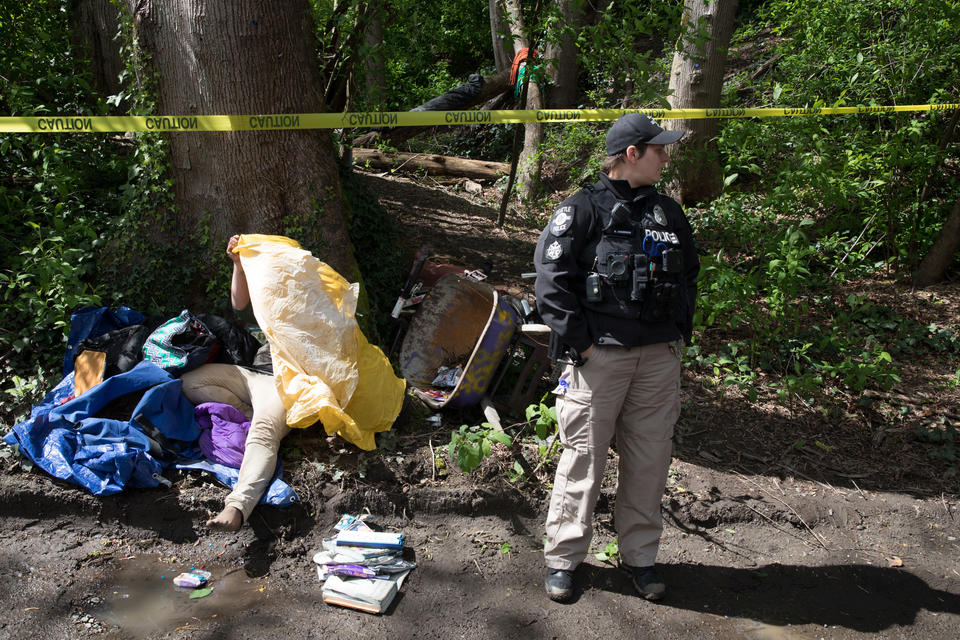 A resident of the homeless encampment at Ravenna Woods sits next to a police officer alongside the road where she was cleared from her temporary home near Seattle's University Village neighborhood on April 17. 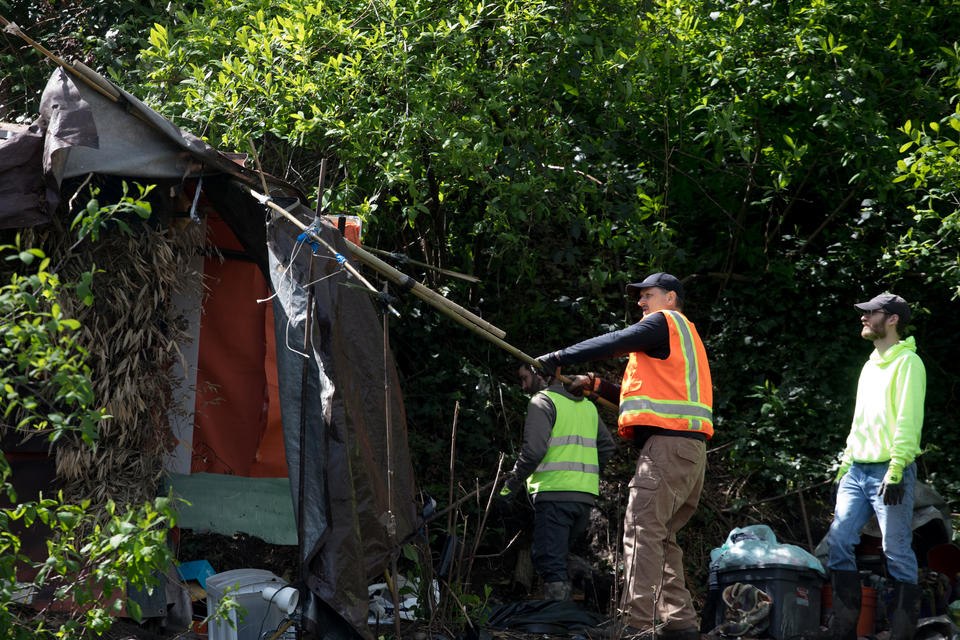 City workers remove a structure during a sweep of Ravenna Woods homeless encampment near Seattle's University Village neighborhood on April 17. 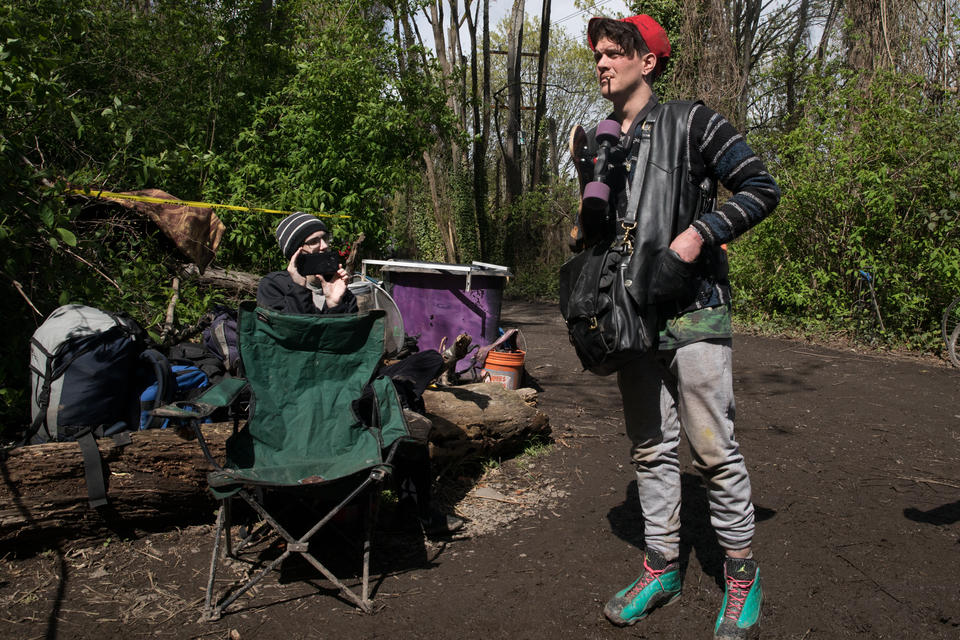 Sean (in the foreground), a former resident of Ravenna Woods homeless encampment, watches as the structure he built is torn down near Seattle's University Village neighborhood on April 17. 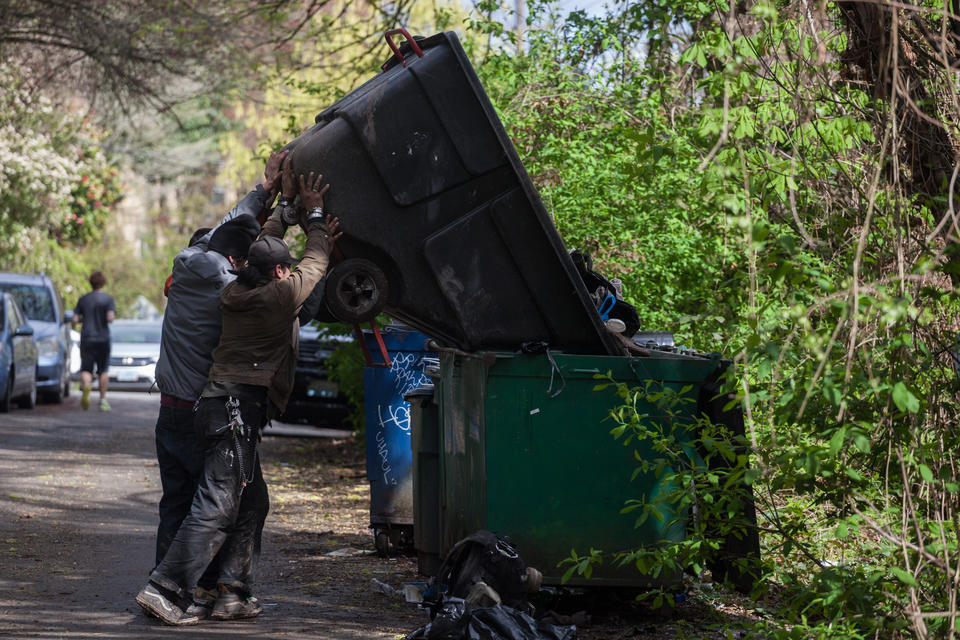 Protesters help a resident throw away trash during a sweep of Ravenna Woods homeless encampment near Seattle's University Village neighborhood on April 17.

Because Ravenna Woods is a parks space, the city could have cleared it without notice, said Will Lemke, spokesperson for the Finance and Administrative Department. But, he said, the city almost always provides at least 72 hours warning.

In this case, an inspector toured the grounds on April 2. That person determined the conditions met the bar for being cleared: Ravenna Woods was dangerous, dirty and one man with a felony record was arrested for carrying ammunition, Lemke said.

On Tuesday morning, there were eight people who had been living in the woods for the last several months. And, according to police with the city’s “Navigation Team,” there were enough shelter beds for everyone, including at places like Peter’s Place and Licton Springs tiny home encampment. Outreach workers loitered in the encampment, as they had done on several occasions in the days leading up to the sweep, offering the beds.

But it’s not so easy, sometimes. “Shelter space, sure it’s there, but there’s not a sense of family,” said Blackwood, one of the Ravenna Woods residents.

Blackwood is from the area and this is his third time watching this patch be cleared. He spoke as he, along with several other residents, mulled around, throwing things away and packing belongings into a black garbage bag. He was unsure whether he’d end up going to a shelter.

Here, he said, there’s support. “We’re making sure everyone’s okay. In shelters everything gets mixed around.”

Keaton Slansky with the Seattle chapter of the Democratic Socialists of America said of the area’s occupants, “They went out of their way to carve out a place they can survive and the city won’t let them do that.”

The schedule and timing of encampment sweeps are often obtuse and changing, and it can be hard to pin down why some attract protests and media while others slip under the radar. Tuesday’s event was organized by activist Dae Shik Kim Hawkins, who received the preliminary sweeps schedule from an undisclosed source in the city.

Everyone present felt they were doing the just and necessary work: Activists stopping what they view as heavy-handed tactics; the Navigation Team connecting people with shelter beds.

Some do accept shelter — in Ravenna Woods, at least one was “interested,” according to Lemke. But converting shelter stays to housing has been a challenge amid the city’s housing crisis and Lemke said it’s not uncommon to see people go from the street to shelter and then quickly back to the street. Tracking those people can be difficult, however, because the Finance and Administrative Department does not have access to the database used by service providers, said Lemke.

It’s for this reason that the cries of “Stop the Sweeps” has been joined by cries of “Tax Amazon.” It’s a reference to a proposed $75 million a year tax on high-grossing businesses to fund the construction of new housing in Seattle City Council. The proposal has been fiercely debated since last fall and business interests strongly oppose it as a tax on jobs. In City Hall Tuesday, business representatives met with the Council to weigh in on the tax.

But its advocates — which include as least a third of the Seattle City Council — support it as a necessary step to ease the housing bottleneck choking shelter space and preventing people from getting into new housing.

The protestors pledged from the start they were willing to be arrested to protect the area from being cleaned out. But as they held their line in front of Ravenna Woods, the campers one by one packed up their things and left. By the early afternoon, the protests had become an argument over how the Navigation Team was treating the items and the structures left behind.

For one man, Ethan, who has been on the streets for over eight years and at Ravenna Woods for the last two months, he intended to “sit on the puzzle I’ve created.” For tonight, he said he’d likely find another camping space, but would “meditate” on using the beds proposed by the city.

In the meantime, he finished a taco given to him by one of the volunteers. In the background, wood cracked as workers tore down the remaining structures.

Washington's rain isn't just gloomy — it's creating landslides that cut off rural communities. And as the climate warms, scientists warn they could get more frequent.