Washington is responsible for seven of the 19 avalanche deaths in the U.S. so far this season, more than any other state

by / April 3, 2018
Photos by Gregory Scruggs for Crosscut 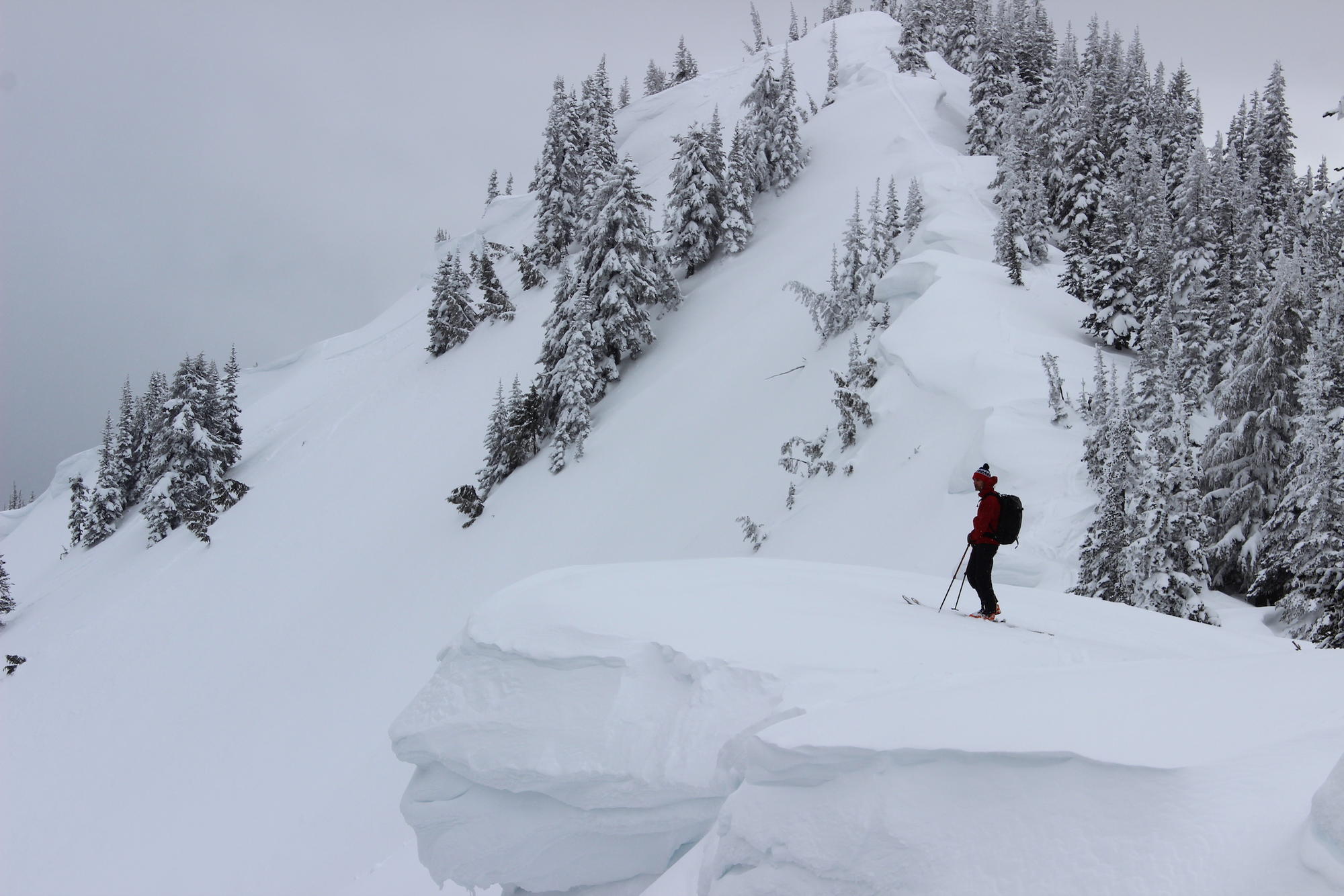 Jeremy Allyn in the backcountry near Crystal Mountain ski resort. (Photo by Gregory Scruggs for Crosscut)

On the morning of Monday, Feb. 26, Jeremy Allyn got the kind of call he dreads. An avalanche had killed two teenagers in Snoqualmie Pass the day before. As a professional observer with the Northwest Avalanche Center, Allyn and a co-worker were tapped to investigate the cause of the fatal slide.

They arrived at the Alpental Valley parking lot just as the ambulance was pulling out with the bodies of 18-year-old Niko Suokko and 17-year-old Declin Ervan, both of Bellevue, who were asphyxiated by a crushing quantity of snow that buried them on a steep area known as the Snow Lake Divide.

After a debriefing from the search-and-rescue team, the pair skied two miles into the valley to the avalanche site. Like a forensic team investigating a crime scene or a plane crash, they snapped photos and gathered technical information about the avalanche’s depth and the snowpack on which it slid. The accident report was published last week.

The tail end of winter made for a tragic season in the Cascades, one that has claimed multiple lives and stretched the Northwest Avalanche Center thin at a time when it is aiming, over the long term, to see everybody come home safely from a day in the mountains. The Feb. 26 incident was the first of a string of deadly local avalanches over the last month, with snowshoers, skiers and snowmobilers among the victims in three consecutive weekends of fatalities.

Altogether, Washington is responsible for seven of the 19 avalanche deaths in the U.S. so far this season, more than any other state. That startling statistic has cast a spotlight on the Northwest Avalanche Center (NWAC), the nation’s second oldest, which operates out of the National Weather Service station in Seattle’s Sand Point.

Even though snow on the ground outside the office window is rare, the center, which is under the auspices of the U.S. Forest Service, employs three meteorologists and two avalanche specialists to produce daily forecasts during the winter season and periodic forecasts in the spring for the Cascades, Olympics and Mt. Hood.

Some people start their day with a quick scan of a favorite weather app, but for the legions of Northwest residents who recreate in our snowy mountains, reading the avalanche forecast on the NWAC app is a regular ritual from mid-November until the end of May — and it has far more life-or-death consequences than the day’s chance of rain.

NWAC has been vigilant in advising backcountry skiers, snowshoers and snowmobilers about an elevated risk of avalanches for most of the winter, but not everyone has adequately heeded those warnings.

The forecast combines a host of information from meteorological satellites, 25 remote weather stations at key mountain locations, updates from the Washington Department of Transportation crews that clear mountain passes and reports from ski resorts and national park rangers. 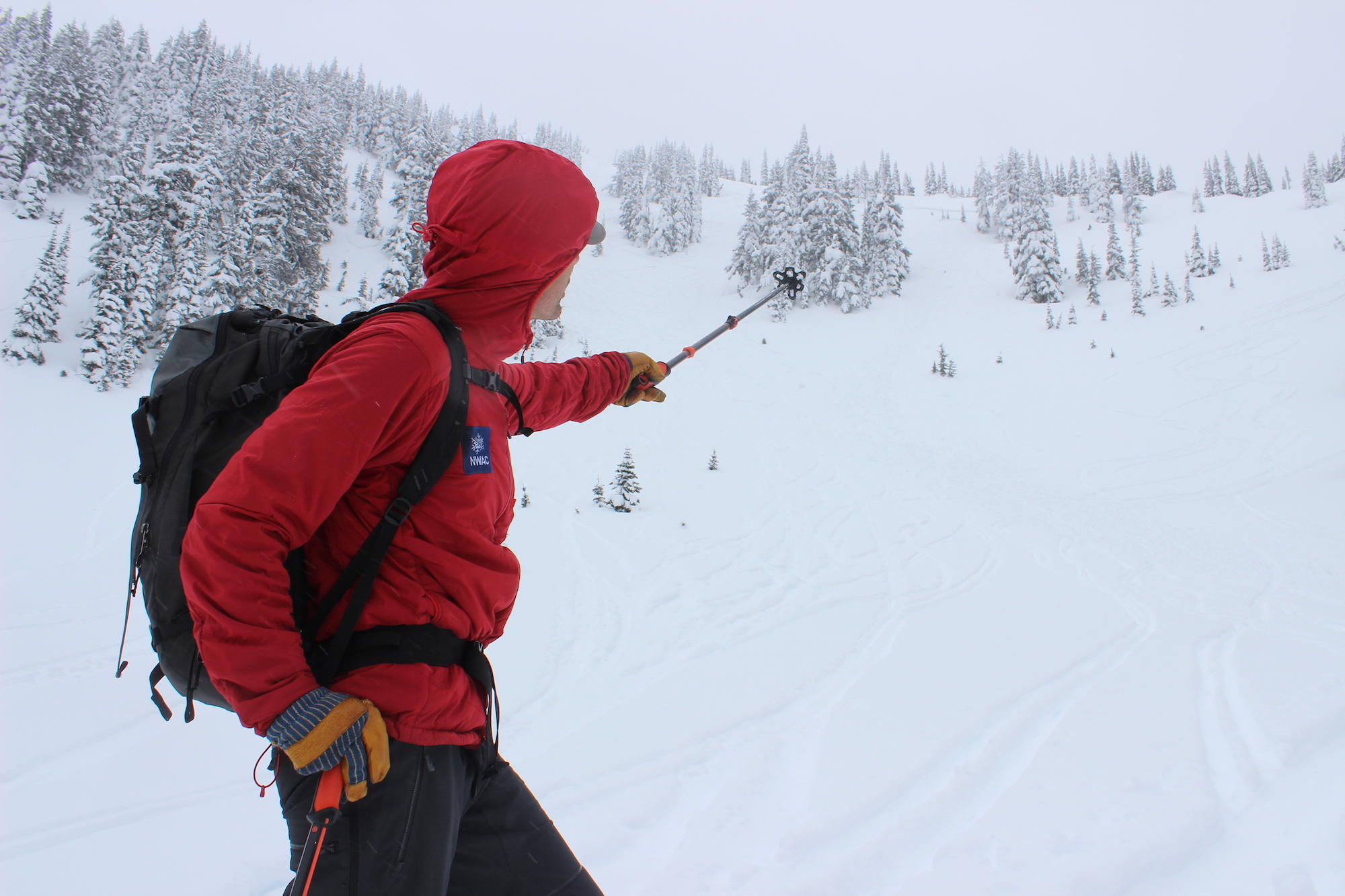 Jeremy Allyn points out the avalanche crown of a recent slide.

Jeremy Allyn points out the avalanche crown of a recent slide.

In the pre-dawn hours, the avalanche center’s Allyn, 49, saddles up his pick-up truck with ski gear like he does roughly three times a week each winter to make the reverse commute from his Green Lake home to the mountains.

Allyn has worked in Washington’s outdoor industry since he moved here from Massachusetts to study at the University of Puget Sound in the late 1980s. He took a year off from college to ski patrol at Crystal, then worked his way into mountain guiding. A climbing accident in Canada that broke both his feet ended his guiding career, but he found a niche in avalanche education — teaching courses on how to identify and avoid avalanche hazards — and eventually, in professional observation. He works as a carpenter in the off-season, but hopes to return to NWAC full-time next winter.

Allyn’s field observations are essential to the forecast’s mix, and last week he took a routine trip to the backcountry near Crystal Mountain ski resort. Responsible for the central and southern Cascades, including Snoqualmie Pass, Mt. Rainier, and White Pass, some reports of skier-triggered avalanches — with no burials — had piqued his interest to check out conditions firsthand.

The bumper-to-bumper headlights on I-5 North soon melded into the strip mall detritus of Auburn, which gave way to Enumclaw horse country. Outside of Greenwater, the rain turned to light snow and blanketed the evergreens with a white sheen.

“I’m pretty tired right now, to be honest,” Allyn, who has the taciturn nature of someone who spends a lot of solitary time in the mountains, admitted on the way. “The last month has been quite busy and we’ve had a lot of near-misses and a number of avalanche fatalities. The combination of physical, mental and emotional fatigue is definitely setting in.”

Allyn had attended a celebration of life for Suokko the day before and another for his girlfriend’s co-worker, who perished in the Methow Valley slide, a few weeks earlier. After the heavy load this season, the avalanche center is looking to put a trauma and grief counselor on retainer for future incidents.

But there was still a job to do, and Allyn was on the trail using alpine touring skis with climbing skins even before Crystal’s lifts began operating for the day. Over the course of four hours, Allyn explored the weekend’s avalanches in Bullion Basin, where two crowns, the clearly visible line left on the snow when a slope slides, stood out with ski tracks running above and below.

Equipped with a pack stocked with avalanche observation gear, Allyn picked two spots to dig four-feet deep pits. Allyn has the lean build one would expect from someone who climbs mountains for a living, and he had the pit dug and shaved to a clean surface in minutes — one suspects he’d be handy to dig out a buried car — revealing a snow profile like a sedimentary rock or tree-ring growth: a cross-section that reveals change over time.

Thin lines running horizontally indicated rain storms over the last few months of winter weather that were buried in the snowpack. On the surface, skiers might know these as rain crusts that make for bad skiing. Once buried, these so-called “weak layers” might not hold when skiers or a snowmobile glide on top of them, causing the entire snowpack above to slide.

In 30 years of mountain travel, Allyn has never been caught in an avalanche that buried him — setting off small, controlled avalanches is sometimes part of the job — though he says he did help rescue a guiding client once in British Columbia’s Valhalla Mountains.

Using the shovel to tap the snow and see its reaction to pressure, it took three tries and maximum force to get a foot-deep cube of snow to slide off the most recent rain crust — a good sign the fresh powder was bonding well to the snowpack beneath it, at least at this elevation and aspect.

The day’s field work completed, Allyn transitioned into downhill mode and zipped down the face of Blue Bell Knoll, a slope already laced with s-marks from the weekend’s backcountry ski crowd — the kind that depend on NWAC’s forecasts to make decisions about how to balance avalanche risk with good-quality skiing.

And by mid-afternoon, camped out at an Enumclaw coffee shop, Allyn filed his daily report so that the forecasters back at Sand Point could add it to the list of data points that would inform the next day’s forecast.

While the idea of getting paid to traipse around the mountains might sound appealing to aspiring ski bums, Allyn must be out there even in frigid cold or soaking rain. Over the course of a season, especially one with multiple avalanche investigations, that routine takes its toll.

Although Allyn mostly sticks to the technical language of his craft, regularly using phrases like “party members,” “uphill mode,” and “mitigate your hazard,” he does get a bit more personal. He admits that the life-and-death decisions that result from his contribution to the forecast are “constantly” on his mind.

“Last year was the first time I was doing a lot of incident reporting and wrapping my brain around the human side of what can happen,” he said. “Interviewing loved ones and partners and fully investigating these incidents, you can’t help but look at them from a perspective of, hey, this could be my friends or my partners, or me.”

The last month has been quite busy and we’ve had a lot of near-misses and a number of avalanche fatalities. The combination of physical, mental and emotional fatigue is definitely setting in.”
— Jeremy Allyn

The avalanche center has grown considerably from its humble roots as a University of Washington project that issued its first avalanche advisory in 1975. While the Forest Service pays for the office-based staff’s $360,000 annual cost, nonprofit arm of the Northwest Avalanche Center raises another $480,000 from corporate and individual donations to pay for the team of eight professional observers, half in Seattle and half in outposts like Bellingham, Mt. Hood, Leavenworth and the Methow Valley.

NWAC has a robust social media presence and hosts 200 avalanche awareness lectures throughout the state. It hosts a continuing education series at REI for first-timers as well as continuing education talks for backcountry users who have already taken the industry-standard level-one course.

Despite its blizzard of outreach, the center is up against a factor perhaps just as dangerous as a touchy snowpack: human desire.

“We’ve still got a long way to go in terms of how we get people to change their behavior,” Scott Schell, executive director of the nonprofit side, said, describing an ideal risk candidate as “the person who works five days a week sitting behind a computer who’s dreaming of getting outside on the weekend and skiing that line they’ve read about on the forums.”

This season’s deaths have been a setback on the road to the avalanche industry’s goal of no fatalities by 2025, but Schell is heartened by long-term trends.

“Fatal accidents have been pretty flat over last 20 years, and at the same time it’s safe to assume that backcountry use in the U.S. has increased somewhere around tenfold,” he said.

Although a 1910 Stevens Pass avalanche was the deadliest in U.S. history, Washington’s high share of avalanche fatalities this season is a recent historical anomaly. Alaska, Colorado, and Montana all have had more avalanche accident reports and fatalities, while Utah is about on par with Washington, according to the Avalanche Accident Database, whose records date back to the 1998-1999 season.

Schell attributes this year’s exceptional number of deaths to “an unusual snowpack” that featured what in avalanche-speak are called “deep persistent weak layers,” or places buried way down in the snowpack that, while unlikely to trigger a slide, will lead to a catastrophic avalanche if they do. Investigations fingered those layers as the likely culprit in most of the fatal avalanches over the last month, although Allyn stressed the goal of investigations is not to assign blame but rather to educate and contribute to the industry’s collective knowledge on snow science.

Convincing local skiers, snowshoers and snowmobilers to heed the danger has been the cardinal challenge of the 2017-2018 winter season, Schell said.

“As an avy center that’s where we have a lot of progress to make,” Schell said, calling it an “uphill battle,” just like the slog his team’s observers make every winter day.

With a new movie fanning the flames of interest in the 1965 classic sci-fi novel, local singer-songwriters translate the epic saga into songs.