Bainbridge author on writing, the working class and cultural appropriation 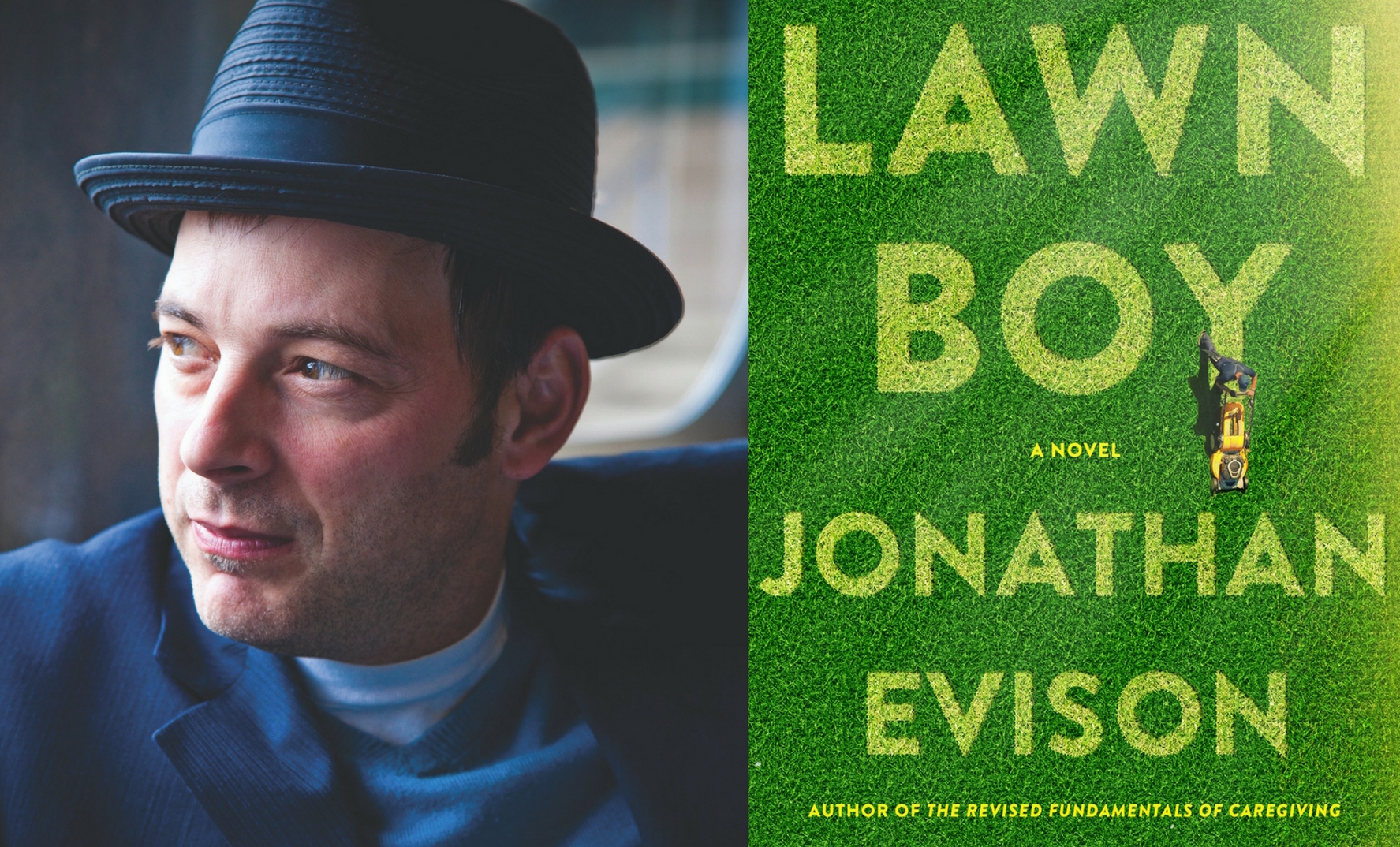 Author Jonathan Evison is on book tour in Seattle for his latest novel, "Lawn Boy."

Bainbridge Island author Jonathan Evison, in an interview, is candor itself. In an energetic, raspy voice, he answers any question you care to ask him with no fuss and a ready humor. He shares a lot of similarities with the narrator of his new novel, “Lawn Boy.” It’s the story of a half-Mexican 22-year-old landscaper, Mike Muñoz, who’s trying to work out who he is and what he wants from life.

Mike encounters plenty of obstacles – some of them self-imposed – along the way. Just as Evison’s fifth novel (“This Is Your Life, Harriet Chance!”) took you inside the mind of a 78-year-old widow as she goes on an Alaskan cruise, “Lawn Boy” puts you in the shoes of a working-class kid drifting from odd job to odd job on Bainbridge Island, bristling at the condescending way some of his well-to-do employers treat him.

Mike’s family situation (his dad long ago abandoned his wife and kids) parallels Evison’s.  So does Mike’s job history. During the 20 years before his first novel, “All About Lulu,” was published, Evison took any kind of employment he could find: “I was sorting rotting tomatoes for the United Grocers in my 30s. I worked on an ice cream stand.”

“Lawn Boy” particularly draws on Evison’s experience as a landscaper. More than his earlier novels, it’s a tough book about a character as filled with frustration as he is with good intentions. There’s also an unexpected gay element to it that is something new in Evison’s fiction. In a Winslow coffee shop last month, Evison addressed all the inspirations behind “Lawn Boy” with a frank and sometimes zany spirit.

You decided to become a writer in the third grade. What prompted that decision and how did you act on it?

My family was kind of falling apart. I was also biochemically manic and off the charts. I’m surprised they didn’t give me Ritalin or something. I was not focusing very well in class. I was a real problem for Mrs. Hanford. But she recognized that I had taken to writing, so she just started letting me sit in a corner and write all day. She made a writer out of me, for sure. She also kind of saved her classroom because one bad egg has a way of taking over a third-grade classroom.

You spent a good 20 years writing fiction before “All About Lulu” was published in 2008. What kept you going at it?

I’ve actually written 14 or 15 books now. Five of them are published. And I realize that it’s really not because I feel compelled to tell stories, or because I feel like I have this talent I have to share with the world. The fact is, I just really need the focus, the activity. It really keeps me grounded. When I write, I get to be my idealized self. I get to be the person I want to be. I get to really put my best foot forward. I get to disappear away from the self. I like to get outside of myself and inhabit other characters.

There are some derogatory comments that Mike makes in “Lawn Boy” about “MFA [masters in fine arts] writing” that I really enjoyed. I assume you did not go the MFA route.

No – and I didn’t even graduate from community college. I just don’t think the stories are in the classroom. Even Hemingway, who was essentially a trustafarian, had the good sense to go drive an ambulance in someone else’s war. Jack London went up to the Klondike. Conrad, Melville – these guys went to sea. I think there’s a whole world of adventure and experience out there that cannot be replicated in any classroom. No amount of craft teaching or shortcuts anyone can teach you is going to help you arrive at an original, unique voice.

There’s a very funny, skeptical scene in “Lawn Boy” where Mike applies for a job at The Kitsap Herald. Did you do any alternative-weekly writing?

Yeah, I wrote a column for this thing called the Mullet Wrapper. It was in Seattle in the late 1980s or early 1990s. These two guys …  I think they got run out of town in Florida. They were kind of con men, actually. I knew one day I’d show up to get my paycheck and they’d be gone. They were running this little weekly, picking up Lewis Grizzard on the AP. But I was like the only local columnist, and it was called “Ask Johnny.” It was kind of like Dan Savage before Dan Savage, but not just about sex.

You moved to Bainbridge Island in 1976 when you were 8. What were your first impressions of it?

Well, my first impression was that we didn’t have as much money as a lot of people. But it was a much more diverse place then than it is now. There were a lot of Japanese, a lot of Natives, a lot of Filipinos and, like, two Black kids. So, it’s just become a lot Whiter here. … I liked the wide-open spaces. People had acreage and stuff like that. There were fields to play in, in the neighborhood and woods. We used to go out and make Bigfoot tracks … do crazy shit like, you know, climb evergreens in thunderstorms. All that kind of stuff that I hope my kid doesn’t do. I actually started going to Seattle by myself in third grade, too – walking up First Avenue back when it was pool halls, strip joints, bars. … I’d just go straight to the comic shop, Golden Age Collectibles, hang out there all day, then come back.

Did you have any concerns about cultural appropriation in writing in the voice of a young half-Mexican narrator?

If we’re going to have that conversation, then I’m just out of a job. Period. The whole reason I write is to have the experience of otherness – to get outside of myself. I want to accrue experience. If anybody has a problem with that, well then, they’re just asking me to be not as good of a person.

But also, my nephew, who’s almost like my son, is mixed. He grew up in a Spanish-speaking household but identified as White because it was almost a point of shame for him. He grew up in southern Oregon. He never learned Spanish, even though his grandma and his mom were speaking it.

When I appropriate, or whatever, I have some window into it. I mean, I’m not a 78-year-old woman either – but my mom is, and I grew up my whole life with her. I can pick her brain. I’m not gay, yet my editor is and has been for 50 years, and he was very helpful for me. Isn’t the idea that we find middle ground? And how else are we supposed to do that unless we try to occupy one another’s shoes, empathize with one another? I’m glad to have my nephew in my back pocket. I don’t think I would have conceived of the character that way had I not had him.

I do write about marginalized characters, but I don’t think I’m going to pick one just randomly. I mean, there’s a line, too: I’m maybe not going to write a first-person narrative by a slave or something like that. But every 80-year-old woman I’ve talked to has said: “How did you do that? You got it right. Thank you.” And my answer is that you don’t have to be that thing. You can be very close to that thing and observe that thing, and talk to them.

Well, it’s just worse. There’s just less jobs. NAFTA and all the free trade agreements – it’s killed us. People don’t understand that there are professionals living in their cars: adjunct professors, chefs, people with two jobs. I mean, people who are sitting in their wealthy enclaves … I don’t think they really understand the plight of the working poor. There are people that work three jobs that are homeless, that don’t have a place to do their laundry. They’re taking a shower at the YMCA or the state park. And I think that that’s so hard for them to fathom. Or maybe they don’t want to look at it.

One low-wage job I was surprised that Mike didn’t pursue was bookstore work – because Mike loves books, and that’s a way to be next to the books.

Oh, yeah, I worked in a bookstore myself. I worked in a Printers Inc. down in the Bay Area when I was about 19. For Mike, it’s the library. If we look at Mike’s future, when his back starts going, I can see him getting a library science degree. After school, I spent a lot of time in the library, just like Mike. It’s the greatest institution, as far as I’m concerned. Everything is even at the library. If you’re homeless, they’ll let you go in there. You can’t sleep – they’ve got their rules – but it’s so inclusive. What else is like that in our culture?

Did Mike’s voice just come to you, or did you fiddle with tone?

No, Mike’s voice was the easiest because the voice is the closest to mine. I’m that working-class kid that grew up around money who’s got his axes to grind, who’s irreverent: equal parts fear and arrogance. And you know, I was a landscaper for years. So, the closer it kind of comes to my own experience, the more, I guess, comfortable I can be – just completely be myself.

It’s pretty good. My edges are getting a little lazy because it kind of grows into the side of the woods. But the lawn is gorgeous because I made this gigantic croquet course – not, like, just across the lawn. This thing covers an acre, and there’s big tree roots, and it goes through the orchard. My wife handles the planting and the gardens, the flowers and stuff like that. But I’m definitely the lawn guy. I do the edging. I prune the orchard every year. I love it. I love doing it. And I think anybody who doesn’t mow their lawn is really missing out. It’s like one of the most satisfying jobs on earth.

If you go: Jonathan Evison will be speaking about "Lawn Boy" on April 10 at Seattle's University Bookstore; April 25 at Third Place Books in Lake Forest Park; April 26 at Seattle's Elliott Bay Book Co. and May 3 at Island Books on Mercer Island.