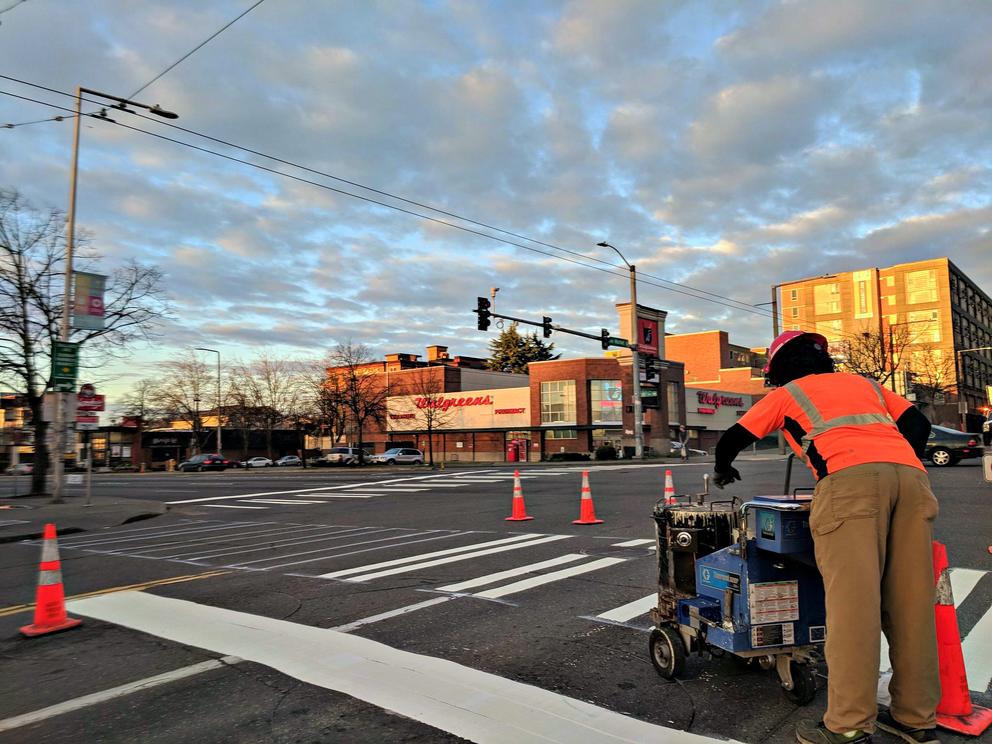 A Seattle Department of Transportation worker repairs a crosswalk at a main intersection in Ballard. (Photo by SDOT/via Flickr)

Employees of the Seattle Department of Transportation perceive a workplace that discriminates against women, plays favoritism in hiring, limits opportunities for voicing concern and lacks communication between management, according to the results of an internal focus group study.

The results were sent to the department’s employees last Monday and were provided to Crosscut by an employee.

In an email to staff, Goran Sparrman, the acting director of the department, acknowledged the feedback and pledged the department, which has some 750 employees and a budget of more than $500 million, would do better.

“Going forward we want to make it clear that favoritism and discrimination are not acceptable behaviors within the department,” he wrote. “As an example, we heard strong feedback that many women inside SDOT do not feel they are treated as equitably as men or given the same level of professional respect. This is not acceptable. We need to ensure that employees feel they do have a voice in SDOT, and that they will not experience retaliation for speaking up. Indeed, we want to encourage a culture where employees are comfortable raising issues and contributing ideas."

A spokesperson for the department said Sparrman did not wish to comment further.

In recent months, employees across the City of Seattle have voiced concerns about their workplace environment. Mayor Jenny Durkan and the Seattle City Council have pledged to revisit dated harassment policies. They have also formed an inter-departmental team to address other issues that have been raised by employees across the city, particularly in City Light and Human Resources.

The examination of SDOT’s internal climate began in the third quarter of 2017, according to Marcus Scott, a consultant with PeopleFirm, the company that conducted the work with the department’s employees. (Scott Kubly was still the director of the department at that time.)

The first step was a survey of all the 750-plus employees, which revealed concerns of favoritism and equity. “There is work to be done in the areas of trust, prioritizing treating employees equitably, promoting open and respectful behavior, and addressing issues in a productive and respectful way,” Kubly wrote in a December email to the whole department.

PeopleFirm then conducted 12 focus groups as a follow-up to the survey, focusing specifically on equity and inclusion, collaboration and leadership behavior. The focus groups involved 113 employees.

On the question of equity, the surveyors concluded, “Employees do not see everyone treated equitably. The most prevalent concern was favoritism.” Specifically, employees perceived, “favoritism in hiring, promotions, everyday management,” “discrimination against women,” and “leaders & managers tolerating different levels of accountability.”

Much of the perceived lack of equity was reported by women workers.

“I feel like what I say isn't heard unless a man says it,” said one respondent. “That just isn’t right.”

Another complained about feeling objectified. “I've given up wearing skirts to work,” this person said. “When I wore a skirt, men would ask me about my exercise regimen.”

More broadly, employees felt that promotion only went to those who knew the right people. One person accused leadership of “cronyism.”

In the face of the perceived favoritism, workers said there were few positive avenues for voicing concern. Speaking out, some believed, would lead to negative consequences.

“I know firsthand the field workers will not talk up because they are scared of retaliation,” said one employee.

“Voicing an opinion has a certain degree of fear that is instilled,” said another. “It is that sort of ‘don’t you forget you’re replaceable’ attitude.”

Leadership took heavy blame for rewarding friends and not fostering an open or communicative department. According to the results of the focus groups, employees perceived from leadership a my-way-or-the-highway mentality and a lack of trust in employees.

“A lot of people seem to want the authority and title of being a leader but not the responsibility that comes with it,” said one person.

“We have directors yelling and cussing at people and when you defend yourself you get reprimanded,” said another.

One respondent pleaded: “Managers, please put more trust into your employees. We know more than you think we do, give us a chance.”

There were some positive pieces of the results, namely that employees seem to genuinely believe in the work at SDOT. Participants praised their colleagues and said people do work hard.

“My career (it’s not just a job) is in transportation,” said one person. “We're here because of a sense of service.”

In an email to employees, Sparrman said he wanted to involve employees in a collaborative process to create an action plan. “Sharing these findings and continuing the conversations about them is an important first step.

“I’m determined that we make the most of this opportunity to address the issues we face.”

Several employees told Crosscut they’re hopeful that Durkan will back up her pledges to address the city’s workplace environment with action.

Durkan has yet to announce steps for hiring a permanent director of SDOT. Several weeks after Durkan took office, Kubly resigned — not fired, exactly, but not asked to remain either.

In an email, Durkan spokesperson Stephanie Formas said Sparrman is conducting a “thorough evaluation of SDOT and the City’s transportation system,” including “on project delivery, organizational structure, culture, and day-to-day operations.”

When that is complete in the coming weeks, Durkan will begin the process for finding a permanent director.