In a concrete jungle, one architect pushes for ‘plywood for giants’ 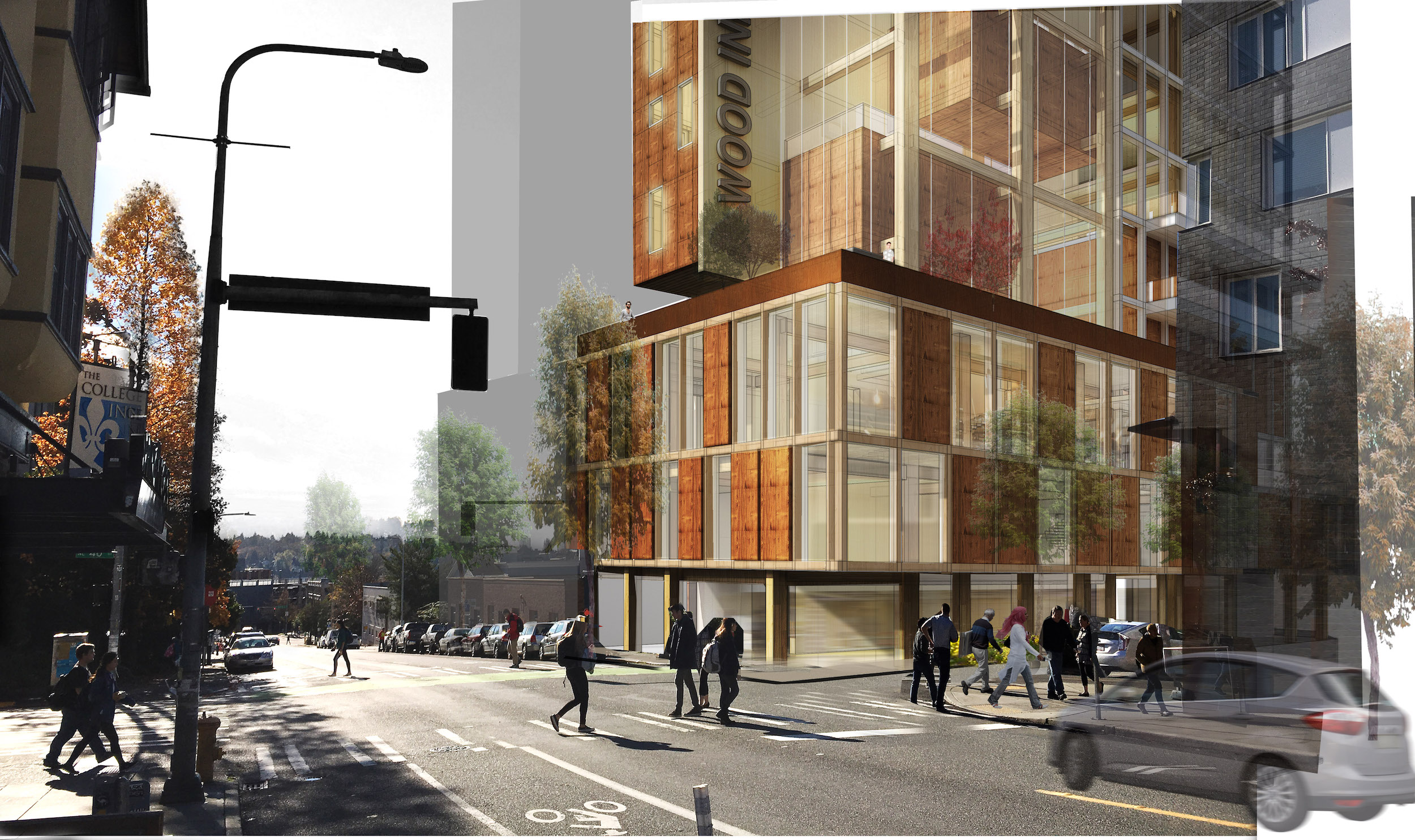 The exterior of the UW Center for Wood Innovation. (Rendering by Vy Nguyen)

Timber is coming back in the Northwest. I don’t mean old growth forests. Those have been holding steady for a couple of decades.

I mean architecture. Cross-laminated timber, or CLT, is a material a true modernist can love — and not just for furniture and finishes. It’s very strong, and too beautiful to hide inside walls. It’s meant to be the wall — to hold off the elements and hold up the building, too.

Architect and University of Washington professor Susan Jones loves it. In her downtown studio, atelierjones, she and her employees are surrounded by blocks of it, slabs of it, and big pictures of it. She loves it so much that she just wrote a book about it: “Mass Timber” (ORO Editions).

Mass timber is wood from small trees, made into big things, and CLT is just one form. You could call it plywood for giants. It’s a three-layer sandwich of fused two-by-six boards with the middle layer aligned perpendicular to the two outer layers. It’s so solid and thick it acts a little like a concrete slab — but lighter, and stronger.

It could become the go-to construction material for medium-sized buildings, not the least because students love it, too. “It’s made for design software,” Jones said.

Big panels of the stuff can be joined to other panels using discrete finger joints. Then they can be cut to specific dimensions, with the edges sawed at very precise angles, so the pieces can be brought to a site and fit together like puzzle. Then CLT can really show its stuff — soaring high, creasing at odd angles, opening overhead to let the light flood in. Daylight can also pop through Mondrian-like cutouts in the wall. All of this makes for expressive architecture, and Jones has used CLT in a boldly designed house for her family as well as a new church in Bellevue. Religious architecture is a specialty of her firm.

Jones looks outside the window of her studio right next door to the Paramount Theater at a sleek new office building. It was built about three years ago, in the current boom. It looks like a typical new downtown concrete-and-steel structure, but weirdly short. City zoning allows over 50 stories there, but this one’s only six. Jones knows the architect, and she doesn’t blame him for the under-use of the site. He took it as high as you can go for a conventional wood building under the current code.

But if this were a European city, it could probably be made more easily out of some form of mass timber, like the 24-story wood building now under construction in Vienna. European states have laid the groundwork for mass timber construction, devoting publicly sponsored research and education to the technology. They’ve led the way in sustainably grown wood, managing rapidly returning forests and approving wood construction.

Meanwhile back in Seattle, architects like Jones are faced with enormous obstacles to mass timber construction. There’s a building industry used to light-frame wood construction, and an overworked permitting bureaucracy with little room for vetting new technologies.

It’s been seven years since Jones devoted much of her practice to CLT. She will testify next week at a session of international code makers on behalf of mass timber construction. But Washington state may be taking the lead in permitting. In the Legislature's most recent session, it passed a bill urging the State Building Code Council to adopt standards for the national code. They are now pending. She hopes the City of Seattle will act quickly to remove barriers for mid-to-high-rise mass timber construction (up to 18 stories).

You can talk all you want about carbon neutrality, but if you don’t have any way for new ideas to get safely adopted, building types like CLT structures are just interesting ideas. It’s up to people like Jones, her UW students, the employees at her design firm — and the fabricators who are willing to experiment with them — to prove it works. Jones’ UW studio has benefitted from small grants, but most of the research she has done has been volunteered. 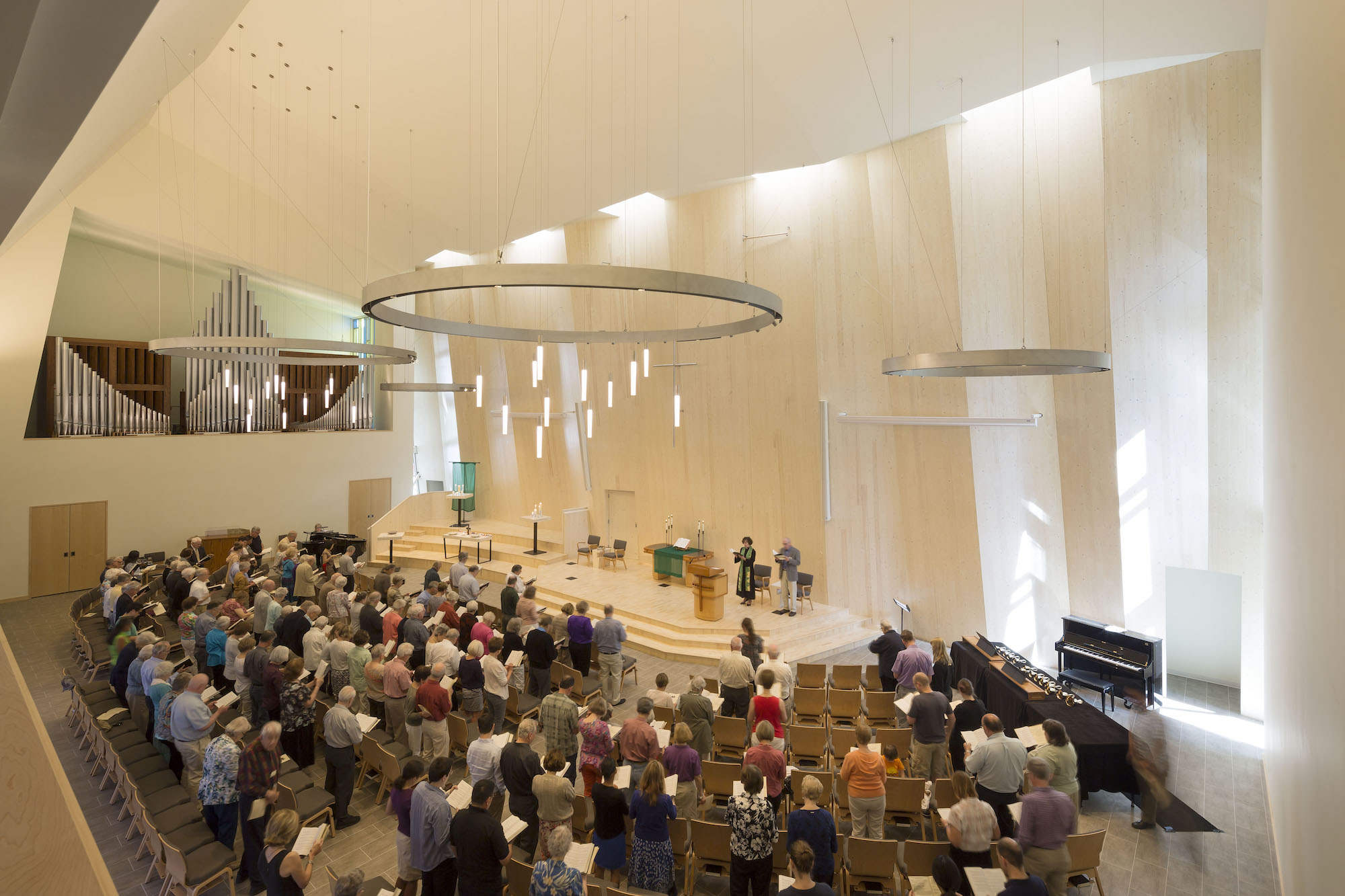 A view of the sanctuary of Bellevue First Congregational Church, which Susan Jones helped design with CLT. (Photo by Lara Swimmer)

A view of the sanctuary of Bellevue First Congregational Church, which Susan Jones helped design with CLT. (Photo by Lara Swimmer)

Wood is the most natural of building materials, and one of the oldest. It grows in most places that are Sapiens-friendly. The roof missing from the Acropolis was made mostly of wood. And it never went away. Stick-built or light-frame buildings are ubiquitous here in the Northwest, just as they are in Phoenix, Ariz. But stick-built buildings are never tall, and the wood is hidden under siding and wallboard. Maybe that’s what rankles modern architects like Jones the most: You can’t see what it’s made of.

And that’s ironic in this region, which was built on the timber industry. Heavy old-growth-derived timber beams and columns and even stair steps are preserved in historic Seattle buildings, lovingly salvaged for reuse. Century-old wood pilings pounded deep into the mud of Elliott Bay continue to support Seattle’s distinctive finger pier system, even as the decking that covers them is replaced. Who knew? If water and air don’t combine like they do at the surface, water can actually preserve wood.  Architects like Jones are adding to a deep Northwest store of experience and knowledge about wood.

The industrial age pushed back on wood construction. Steel and concrete can be manufactured to uniform standards. Our own age has not been kind, either. Wood can’t be reproduced on a 3D printer. Also, we know now that it’s worth a lot alive, sequestering carbon and cooling the environment. The bitter culture wars over logging in the 1990s are now a painful memory. But environmentalists succeeded in halting some cutting in time to save some habitat-rich old growth.

Anyway, sawmills only deal with young, small logs. As for our logged-over lands, they’re not much good for anything, including the environment, unless they are managed, according to Kate Simonen, an architecture professor at the University of Washington studying building materials.

And benign neglect doesn’t work. Jones found this out the hard way with a patch of logged land in San Juan County. Her grandfather bought the land when she was a child, hoping it would regenerate. Turns out the county requires replanting and weeding, or else only one species — the opportunist Hemlock — will prevail. That might be a revelation to all of us who came out of the timber wars thinking forest management was mostly cover for clear-cutting. Once land has been logged, it’s more like a farm than an old growth forest, at least for a century or so. That’s a long time to sustain maintenance without revenue.

All trees sequester carbon, whether they are replanted in a sustainably managed forest, or simply felled and cut into two-by-fours. This helps to explain why Jones’ exhaustive research showed that her CLT house was not technically much more carbon-efficient than if a similar-sized house had been stick-built. It also explains why forestry practices matter, and third party certification of timber sources is important, according to Simonen.

Now, low-rise CLT buildings might have a chance. An 18-story CLT building was finished last year in Vancouver, B.C. It might not be in time for the current boom, but recently passed Washington state legislation will allow construction of buildings taller than six stories with wood. Local municipalities will have to revamp codes to make it possible to actually build an 18-story building with wood.

Jones will be ready.