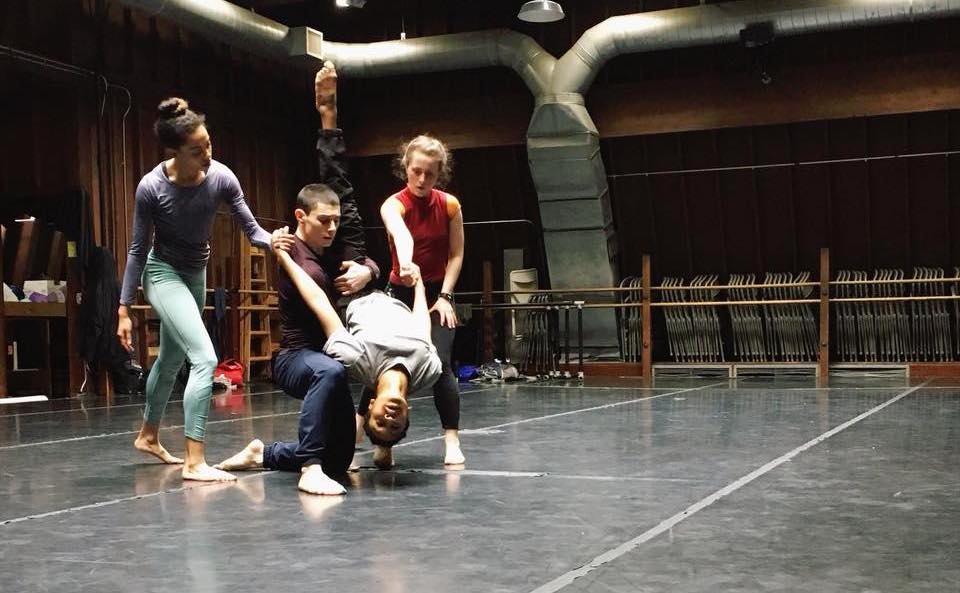 The early stages of preparation for “H.R. 3244” — the latest work by Spectrum Dance Theater artistic director Donald Byrd — aren’t what most people would think of as dance rehearsals.

For one thing, there’s a lot of “homework” involved.

Byrd, in readying his performers for the show, requires them to read all 80-plus pages of H.R. 3244, a Congressional bill passed in 2000 that attempted to target and more effectively punish the perpetrators of modern slavery. Byrd also asks his dancers to comb the website of the Polaris Project, an activist organization engaged in a “global fight to eradicate modern slavery”; to study an NPR article questioning the way that the history of slavery in the United States is taught in schools; and to listen to eyewitness accounts of sex-trafficking victims found on YouTube and on the conservative media outlet, The Blaze.

The dancers are then expected to discuss their findings.

During a rehearsal a few weeks ago at Spectrum’s Madrona studio on the shores of Lake Washington, Byrd kicked things off by asking dancer Madison Oliver to read at length from H.R. 3244. When dancers Fausto Rivera and, later, Nia-Amina Minor took over from her, they maintained Oliver’s same neutral tone.

“No comprehensive law exists in the United States that penalizes the range of offenses involved in the trafficking scheme,” Minor read. “Instead, even the most brutal instances of trafficking in the sex industry are often punished under laws that also apply to lesser offenses, so that traffickers typically escape deserved punishment.”

“What strikes you about that?” Byrd suddenly interjects.

There’s a weighty pause, before Minor suggests, “The punishment isn’t rough enough to deter them from doing it? Because maybe it doesn’t outweigh the money they make?”

The dancers’ tentative responses give way to something more vigorous after Minor reads aloud: “Trafficking of persons is an evil requiring concerted and vigorous action by countries of origin, transit or destination, and by international organizations.”

All the dancers murmur in agreement.

“By identifying the problem as an ‘evil’ that requires effort from all involved,” dancer Mary Sigward suggests, “it raises it to a level that it hasn’t been put at before.”

“Do you think there are remedies to these things?” Byrd asks.

“The more we talk about it, and the more transparent we are about it,” Minor offers, “the more we can best prepare ourselves to respond to it when we see it. But the less people know about it, the more they feel it’s separate from them.”

This kind of group-think dance rehearsal process has been used before by Byrd in previous works addressing hot-button issues: the blackface tradition in “The Minstrel Show,” the Nazi concentration camp experience in “The Theater of Needless Talents” and police brutality in “Shot.”  The common thread among these pieces is Byrd’s desire to confront behavior or events that baffle him as well as horrify him.

“Usually if I want to understand something, I make a piece and that forces me to do research and do work and kind of understand it and process my feelings while I’m making the piece,” Byrd says. “In some ways it’s very intuitive rather than completely calculated.”

A casual observer might wonder how you translate such troubling subject matter into contemporary dance. But Byrd has an answer.

When he was learning an abstract work in his early years as a dancer in the 1970s, he wouldn’t dance it as if it were abstract. Instead, he says he would create his own inner narrative for it — and he wants his dancers to do the same.

The trick, he says, is to find “a lot of situation” within the choreographed movement.

During a run-through of “H.R. 3244” last month, Byrd’s unusual process starts bearing fruit. The dance-in-progress treats its subject matter much less baldly than I expected. As a flat recorded male voice reads passages from H.R. 3244, subdivisions of dancers — a quintet, a quartet, two trios — huddle in trembling clusters, then disperse into action.

As the piece progresses, the tight-knit teams of dancers engage in sprints, stutters, stumbles and collapses. High-speed partner-changes accommodate both soaring lifts and perilous trust falls. (The performers’ split-second timing ensures that no one gets hurt.) Body slaps and floor-shaking stomps are part of it, too, until someone gets spooked and they scurry back into a poignant huddle.

The soundtrack alternates between the H.R. 3244 voiceover, a recording of a young female trafficking survivor found online (“Once you’re there, it’s really hard to get out of it”) and selections from Bach’s sonatas for solo violin, to be performed live by Aeolus Quartet violinist Nicholas Tavani. Gradually, the voiceovers recede and the music starts to dominate. The dancers’ movement becomes more primal, even subliminal as they explore human connection in all its manifestations: manipulation, dependency, refuge-seeking, emancipatory struggle.

After rehearsal, Byrd acknowledges that “H.R. 3244” is something different from Spectrum’s recent politically explicit “Shot” and “A Rap on Race.” The first was an intense, straight-from-the-headlines look at police killings of young African Americans. The second created a sort of movement commentary around a famous talk between anthropologist Margaret Mead and writer James Baldwin. Both were charged and even confrontational in character. But this newest work is more about entering a mindset than analyzing an issue.

“This piece is not about human trafficking,” Byrd says, “because to tackle that head-on would be problematic and probably impossible. … For the most part, the piece does not attempt to illustrate it. It kind of just tries to access the feelings somehow.”

He adds, “My intention is to help draw attention to an issue which is underreported and, unlike police violence, for most people is not known about. That's my small contribution.”

How unusual is it for the dancers to discuss a work’s subject matter the way Byrd does? Are there other choreographers whose rehearsal approaches are as talk-intensive as his?

Rivera, a co-founder of Seattle dance troupe Au Collective, says he has experienced something similar “with people who are from my generation, my peers but never someone who’s older than me and who’s like a teacher-director figure.”

Minor adds, “Definitely in theater settings I’ve been in the study is that intense. The packet they give you for a particular play could be, you know, heavy. But that’s the theater. And I guess there’s this expectation that actors are doing a study that dancers aren’t doing. But I feel like dancers are as intensely motivated to be immersed in the work they’re doing.”

With Byrd, she notes, there’s a real sense of the dancers being called on to partake in the research. “He kind of tasks us to do the work outside of the studio, and then come in ready to input. So that, I think, is a little bit new for me.”

While “H.R. 3244” involves dancers “doing physical, tangible things,” Rivera says, it also means “having a conversation, leaving it for two days, and coming to conclusions on your own.”

Minor adds: “The constant push that Donald is giving us to continue along the process, to dive deeper and do the work — keep reading, keep studying, keep asking, keep the narratives floating here so that it does come out when we’re dancing — is largely the reason why the work has this range of emotion that’s being put forward.”

What Byrd is looking for, he says, are the “micro-dramas” inside the movement. He views the 75-minute piece as a “meditation” as much as a political statement.

The result he’s after is as straightforward as it is open-ended.

“Hopefully,” he says, “something gets triggered in the viewer.”