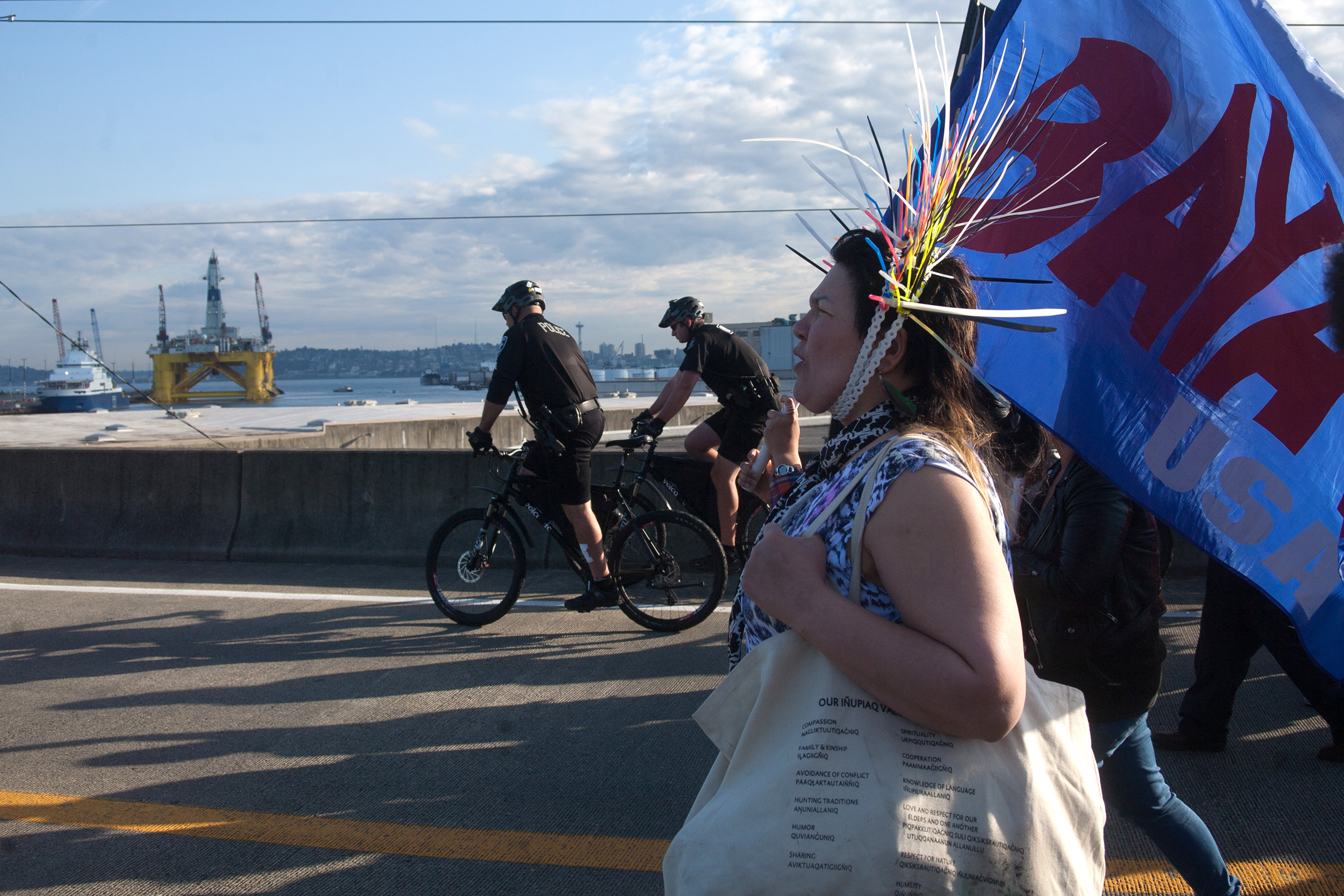 Allison Warden of Inupiat tribal family in Alaska marches during the You Shell Not Pass direct action at Terminal 5 in the Port of Seattle on May 18, 2015. (Photo by Matt M. McKnight/EPA)

Yes, women are powerful, but men dominate environmental decision-making around the world. According to the World Economic Forum, the global energy sector is only 15 percent female with a downright insulting zero female CEOs. Researcher Susan Buckingham cites this gender imbalance as a major reason for the lack of progress in climate action.

This is increasingly validated within the United Nations, as evidenced by increased focus on and spending for programs on women and the environment. And yet, the absence of women in positions of power seems to go unnoticed by U.S. climate activists.

Women have been excluded from positions of power over natural resources for most of colonial history. This legacy of male domination is shifting in the Pacific Northwest. We are ahead of the curve with Maia Bellon leading the Washington Department of Ecology and Hilary Franz leading the Department of Natural Resources. Are we, the progressive Thin Green Line, really the problem?

We act as if having a few women leaders gives us permission to ignore gender equality. I see it in our natural resource agencies and our environmental nonprofits, which are top-heavy with men. The University of Washington's environmental science program is graduating 30 percent more women than ever before, yet these graduates are filling lower ranks — not positions of power. I see it when women endure sexual harassment as rangers and firefighters.

The women I know are scientists, policy makers, directors of organizations — and I know gender inequality is their daily struggle. It’s trolling them, stalking them and barricading their career advancement. And yet, environmentalists here are stubbornly unwilling to speak up.

I see the lack of attention to women’s labor and leadership daily. Folks here pat themselves on the back for stopping an oil terminal or coal trains, and yet everywhere I go I see normal women taking risks and making sacrifices to step up when big conservation groups fail to act on climate fast enough.

Those working on the ground to shut down Terminal 5 during the Shell protests were primarily women, a substantial many of whom were women of color. If you go back and look at the pictures, you can’t help but see it. How then, did the media fail to understand that this was an extraordinary tipping point in women’s activism?

From the Raging Grannies to Idle No More, the women on the ground are not elected officials. Many have never even worked in the environmental sector. At the climate lobby day in Olympia this year, women outnumbered men with a ratio of 1.6:1.

Despite women making less money and spending almost twice as much time as men on childcare or housework, women are showing up for climate action.

And it’s particularly important because the impacts of climate change are not gender-neutral. While the lack of demographic data collected by the environmental sector makes it difficult to quantify how climate change affects women, the information we do have reveals a devastating impact. The natural disasters we are seeing more and more of — like droughts, floods and wildfires — are directly linked to peaks in gender-based violence for months and even years afterwards.

Alternatively, when women are fully included in environmental decision-making we tend to see less conflict, more democratic outcomes and higher long-term community engagement. When I ask folks what they think about environmental policy, even their motivations fall along distinctly gendered lines. Men are more likely to focus on near-term economic impacts, and women are more likely to focus on a moral obligation to children.

As Cheri Cornell likes to put it, women are the ‘not so secret’ sauce to fixing climate change. Her leadership with Washington Women for Climate Action Now (WWCAN) has quietly unleashed a force of feminist activists who weren’t engaged by other environmental groups. During Al Gore’s Climate Reality Training, WWCAN noticeably tipped the scales in the room by recruiting 60 women from all around Washington, including 30 from outside King County to represent the rich geographic, economic and racial diversity of Washington State. After the training, these 60 women brought what they learned to their own communities through organized discussions.

As the environmental sector is grappling with institutionalized racism, it’s also time to face institutionalized sexism. In the last few years there has been growing attention to what environmental injustices look like and how they measurably impact people of color. Once folks understand the basics, then we can begin challenging all the policies, practices and funding mechanisms that consistently give white people power and resources. Similarly, I suggest first learning about the problem before planning your action.

While it can be uncomfortable, we cannot disregard the importance of gender. The work is necessary.

It is necessary right now because we are already creating gender-blind climate policies. In 2016, I analyzed the climate action plans for Seattle and King County and I was shocked to find zero references to women or gender within the texts and only a handful of references to race.

Our gender cannot be separated from our race or socioeconomic status; we must take an intersectional lens to this work. King County’s plan aims to “increase focus on the determinants of equity in order to make progress in the elimination of the root cause of inequities.” But there wasn’t any data disaggregated by race or gender as reference points within the plan.

How can we fix inequity if we don’t even have a baseline against to which measure progress?

Gender-blind policies undermine the long-term success of our climate action plans. We need to keep asking questions like: Are we equal? Is it measurable? Power and resources flow to men by default, and once you start documenting it, you can’t unsee it. And I assure you that white women, cis women, heterosexual women, do not have all the solutions.

This year in the U.S., we have a unique opportunity to move the needle on both gender equality and climate action. In February, Congresswoman Barbara Lee introduced the Women and Climate Change Act of 2018, H.R. 4932. The act will establish a federal working group and develop a strategy to prevent and respond to the effects of climate change on women.

In an unprecedented collaboration, the Women and Climate Change Act was endorsed by both Sierra Club and Planned Parenthood. Women’s rights groups and environmental groups are finally beginning to consolidate their power. The challenge is laid out for us.

This Earth Day, let’s focus on women, and let’s talk about power. 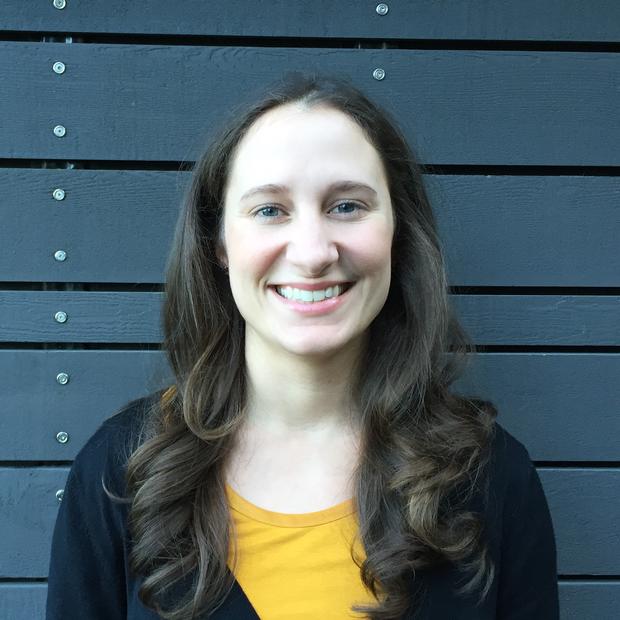 Barbara Clabots is a researcher working at the intersection of gender equality and the environment.