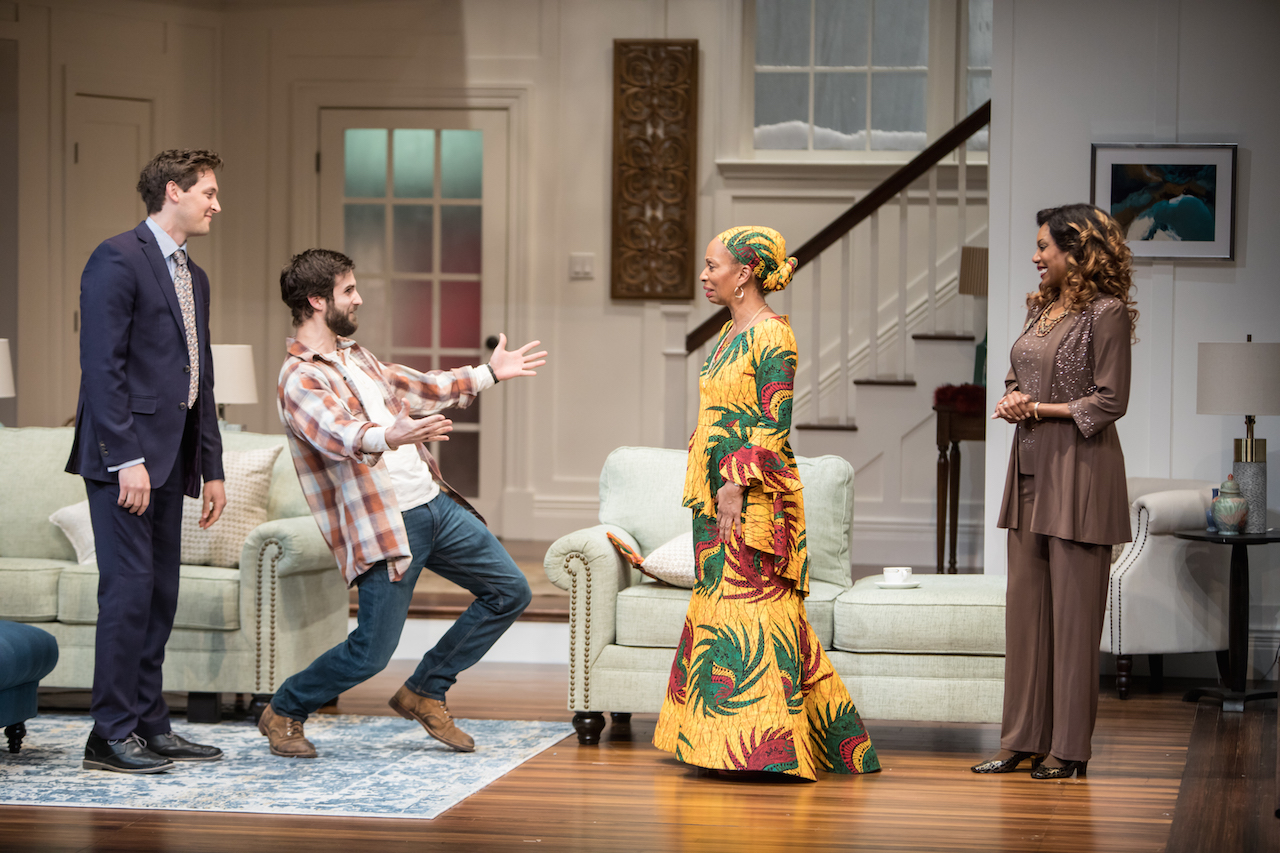 Members of the cast of "Familiar" by Danai Gurira, directed by Taibi Magar, at the Guthrie Theater, Minneapolis. L to R: Quinn Franzen, Michael Wieser, Wandachristine and Austene Van. This Guthrie Theater co-production will open at Seattle Repertory Theatre on April 27. (Photo: Dan Norman/Courtesy of The Guthrie Theater)

Where are the plays by women?  If you’re in Seattle, just look all around.

This spring, a preponderance of Seattle stage companies are presenting new and recent scripts by women. This includes most larger outfits (from Seattle Repertory Theatre to 5th Avenue Theatre), and many mid-sized groups (Washington Ensemble Theatre, Taproot Theatre, Seattle Public Theatre, etc). There are dramas and comedies, as well as musicals women created or co-wrote (“Kiss Me, Kate” at 5th Ave, “String” at Village Theatre).  And intimate performance pieces by women in smaller fringe venues also abound.

Yes, March 8 was International Women’s Day and April is Women’s History Month. But I’d wager this profusion has little to do with either designation. So is it more like Seattle closing, in a very visible and concerted way, a longstanding theatrical gender gap?

Women theater artists in the United States and beyond have been vigorously asking and investigating for the last decade and more: why, with many females graduating from university playwriting programs, writing plays and submitting them for production, do contemporary scripts by men get produced far more? Some studies have shown it’s not just a matter of artistic preference, but an uneven playing field. One particularly troubling study from 2009 by Vassar College revealed that when the same script was submitted to theaters bearing the name of a female author, it generated less interest and attention than if a man’s name was attached.

Summits and symposia about bias and righting the gender imbalance have multiplied to delve into the issue. Activist groups like “50/50 by 2020,” the League of Professional Theatre Women and Kilroys, which generates annual lists “of the most recommended un- and underproduced” plays by female and trans women advocates for parity in production. As does, in this region, the writing center and Women Playwrights Festival producer Hedgebrook. 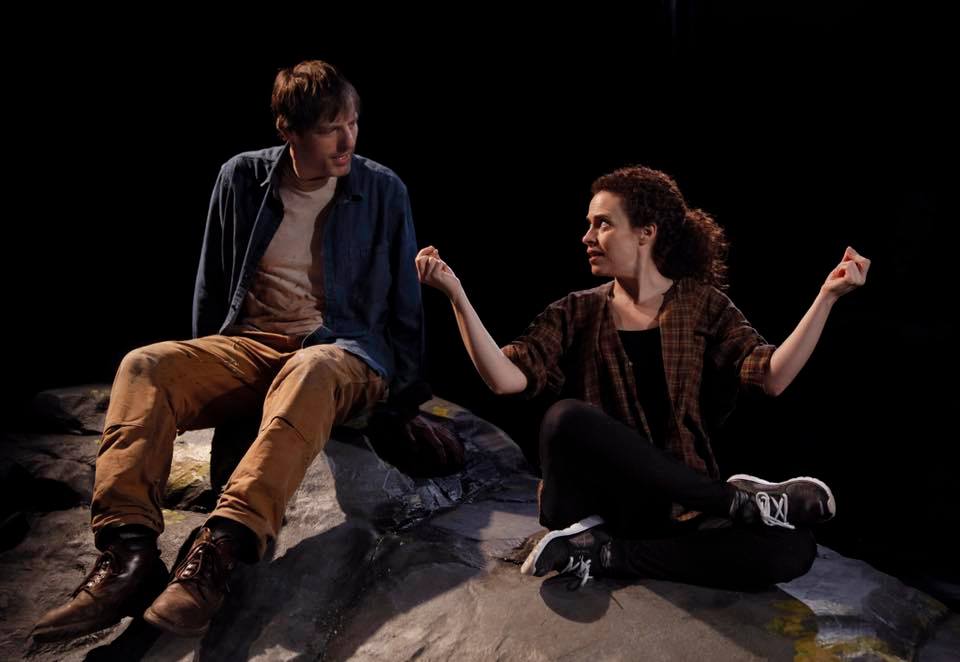 "Big Rock" by Sonya Schneider and directed by Laurel Pilar Garcia. It premiered earlier this spring at West of Lenin theater in Seattle. (Photo: Chris Bennion)

"Big Rock" by Sonya Schneider and directed by Laurel Pilar Garcia. It premiered earlier this spring at West of Lenin theater in Seattle. (Photo: Chris Bennion)

Their joint efforts have yielded progress — gradually. In its survey of the 2016-17 season line-ups of 380 nonprofit theaters, Theatre Communications Group found that 53 percent of the new plays in the mix were penned by men and 36 percent by women. (The other 11 percent were co-written by people of both genders.) This is an increase from previous seasons (though partly offset by the sizable number of classical older plays by men — written in theatrical eras when gender equity wasn’t a stated or shared goal).

But as a theater town known for its progressive political views, Seattle is taking a lead role these days in evening the score. And how does this play out onstage? Given that live drama is a very tough medium for any writer to master, there’s, of course, no guarantee that women’s efforts will be more enlightening, engrossing or entertaining than what men come up with. But are women telling different stories we’ve not heard onstage before, as some feminist activists insist?  Or conveying quintessential stories from fresh perspectives?

Seattle’s spring stage offerings give an opportunity to scan what’s on the minds and imaginations of some current, leading and upcoming American women dramatists.

None of their plays I’ve seen so far would pass the so-called Bechdel Test, which posits three feminist criteria: a film or play must have 1) two female characters; who 2) talk to each other about 3) something other than men. But such conditions can’t be mandatory, and perhaps were somewhat tongue-in-check to begin with. Writers write about what impels them to write. Given that women don’t live in a gender vacuum, some of their plays will center on pivotal relationships with men — husband, father or lover.

In Seattle playwright Y York’s incisively comic and whimsical “The Impossibility of Now,” which played at 12th Avenue Arts, a middle-aged female poet and teacher discovers that a traumatic brain injury has drastically transformed — for much the better — the personality of her formerly morose, emotionally distant husband.

In local author Sonya Schneider’s triangular tale, “Big Rock,” which played at West of Lenin, a somewhat younger, highly successful visual artist is also in the process of redefining a significant relationship with a man. In this case he is her difficult father, a once-lionized poet now holed up in grouchy solitude on a Pacific Northwest island.

"Ironbound" (which runs at Seattle Public Theatre through April 15) exists a world away from that island haven, in the depths of underclass urban America where dreams of success are insupportable if you are uneducated, broke, female and an immigrant.

Martyna Majok’s raw and bracing play, anchored by a breathtaking lead performance by Alexandra Tavares, is like several candid snapshots from different phases of a woman’s life, shuffled and dealt. There isn’t a shred of falsity or a drop of sentimentality in the 90-minute one act, as it steadily gains impact. But it isn’t devoid of humor or a sliver of hope either.

We meet Darja (Tavares) in her early 40s, waiting for a late-night bus at a desolate, grubby stop in Newark, NJ. (Ironbound is a working class, multi-ethnic district in the city.) Her lunkish mailman boyfriend Tommy (Roy Stanton) tries to persuade her to come home with him on this freezing night. If Darja is sharp-tongued and hard-nosed about demanding that he pony up some cash, we eventually understand why in retrospective scenes. The first occurs 22 years earlier, when she is a high-spirited recent immigrant from Poland with a loving, impractical husband, Maks (Arjun Pande), scraping by on multiple menial jobs.  Maks wants them to move to Chicago, to chase his goal of being a blues musician. But Darja is pregnant. And the choices she makes are the kind made when it’s not just your own survival that matters.

“Ironbound” lets you know what Darja is up against, and why a woman in her situation has to barrel forward or fall through the cracks.

Lauren Yee’s new "The Great Leap" (running at Seattle Rep through April 22) veers into the kind of thematic territory once exclusive to male writers. It’s about an international culture clash between two male basketball coaches, the American Saul (Bob Ari) and the Chinese Wen Chang (Joseph Steven Yang), over a “friendship game” in China which pits their university teams against each other: one from San Francisco, the other from Beijing. It’s also about the ambitions of an unlikely young whiz on the court (Linden Tailor), political disillusionment and parenting.

There’s a lot happening onstage (including China’s crackdown on the 1989 student protests in Tiananmen Square), and the storyline occasionally dribbles when it should shoot. But there’s no shortage of swagger and sports trash talk, and no hesitation to explore and empathize with these three male characters.

Opening soon are a couple of plays that might well pass that “Bechdel Test.”

Carrying on the sports theme from a strictly female perspective is Sarah DeLappe’s acclaimed “The Wolves” in its local premiere (at ACT Theatre, April 20-May 13). The play centers on the adolescent members of a highly competitive girl’s soccer team, their interactions and evolving identities. As the playwright told NPR: "When we start the play we're immediately on a planet of teenage girls. Instead of following a brigade of young men in the trenches or preparing to go to war, we're following a team of young women who are preparing for their own sort of battle on the soccer field."

On another track, Danai Gurira’s “Familiar” (coming to Seattle Repertory Theatre, April 27-May 27) stakes out new territory in the vast realm of the classic American Family Play by focusing on an immigrant Zimbabwe-American clan in Minnesota. These are not impoverished refugees fleeing strife-torn homelands and facing the wrath of anti-immigrant policies in their new country. They are upper-middle class achievers with their own set of humorous and serious, familial and cultural tensions — all displayed as they gather for a wedding.

Gurira is a double threat artist: a performer who is a co-star of the blockbuster film “Black Panther” and a writer whose searing Liberian drama about women in war, “Eclipsed,” reached Broadway and earned a 2017 Tony nomination for best new play. She is also one in a group of talented female American playwrights with close family ties to Africa; they include Jocelyn Bioh, Mfoniso Udofia and Ngozi Anyanwu.

There are other works by women on the way including Jennifer Haley’s spooky “The Nether” (April 27-May 14 at 12th Avenue Arts) and Karen Hartman’s comedy about lactation (yes, baby nursing) “Goldie, Max and Milk” (at UW Penthouse, May 25 to June 3).

Clearly, there are no hard and fast rules for women’s dramaturgy. And categorizing art only through the lens of gender, race or any other single quantifier is a notoriously tricky business that doesn’t factor in creative imagination and individual expression.

With a new generation of female authorial voices getting more of a hearing in our theaters, there is bound to be increased diversity and less stereotyping of what women’s writing should or shouldn’t be. Virginia Woolf put it like this: “There is no gate, no lock, no bolt that you can set upon the freedom of my mind.”