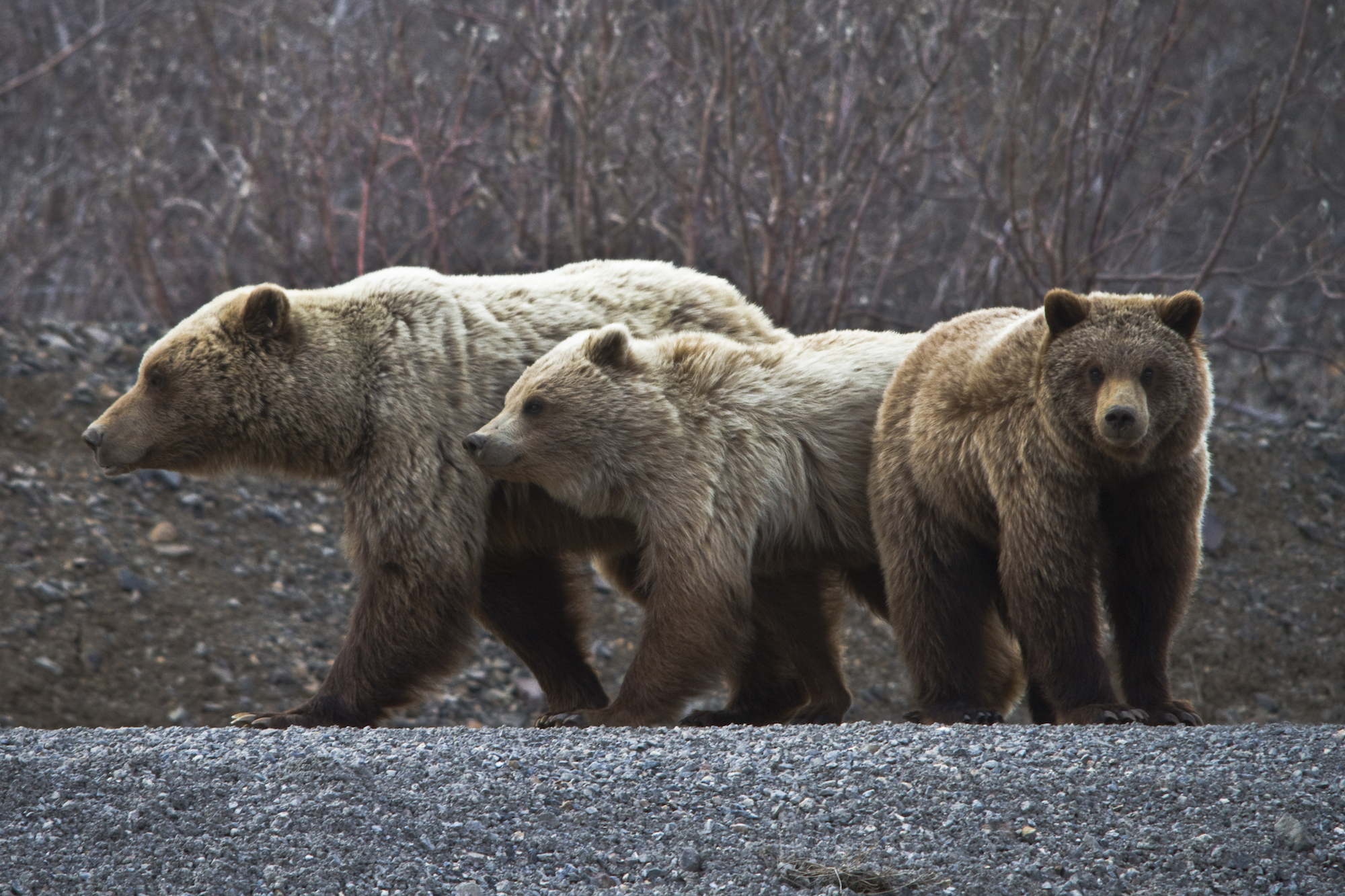 He said it. He really did. To everyone's surprise, on March 23, at the North Cascades National Park headquarters in Sedro-Woolley, Interior Secretary Ryan Zinke — the same Ryan Zinke who had recommended shrinking Bears Ears National Monument in Utah and who had announced last June that Yellowstone's grizzlies would be dropped from the endangered species list — declared that he was all for restoring grizzly bears to the North Cascades.

"We are moving forward with plans to restore the bear to the North Cascades," Zinke said, stating unequivocally that the stalled process of preparing an environmental impact statement for grizzly restoration there would be completed by the end of this year.

If that really happens, then — 43 years after grizzlies were first listed under the Endangered Species Act — federal agencies can start bringing them back to the Cascades.

Once upon a time, hundreds of grizzlies roamed the North Cascades, as they roamed virtually all the rest of the Western United States. But for more than a century, people shot and trapped them, and the big bears were virtually all gone by the time North Cascades National Park was created in 1968. A year before that, at least one grizzly had still roamed the mountains; somebody shot it within what soon became the park.

Eight years later, grizzly bears in the Lower 48 states were listed as “threatened” under the Endangered Species Act. A federal recovery plan subsequently designated six grizzly bear recovery zones. One recovery zone covered 6 million acres, nearly all of it national park and national forest land in the North Cascades. The U.S. Fish and Wildlife Service came out with a North Cascades chapter to the national grizzly bear restoration plan 21 years ago, but it was never funded until late in the Obama administration. The environmental impact statement (EIS) process then began, but the Interior Department halted it last year.

Now, if the EIS gets finished as Interior Secretary Zinke promises, the feds can move ahead with restoration.

In the years after that lone grizzly was shot in 1967, people have occasionally reported seeing something that sure looked like a grizzly bear, and biologists have assumed a handful of bears at least dropped by. But for years, no one has found hard evidence. The draft EIS explains that in the previous 10 years, there were only four confirmed sightings in the North Cascades — all north of the border with Canada.

Despite extensive research, says Jack Oelfke, head of cultural and natural resources for North Cascades National Park, "we have not had a verified sighting of a grizzly bear on the U.S. side of the border in this ecosystem since the mid-1990s." In other words, "the population is functionally extirpated. So, it is safe to say that any bears that might be seen on the U.S. side of the border are 'tourists,' and are not residents … but that we haven't even verified a 'tourist' bear since the mid-1990s."

No one expects that grizzlies, left to their own devices, will form a self-sustaining population in the North Cascades ever again. Washington's current wolf packs were started by individual animals that just walked into the state. Why don't grizzlies do the same? There are bears north of the border in British Columbia; the closest populations are endangered themselves. Besides, to get here from the north, a bear faces a number of barriers near the border: They would have to swim the Fraser River — not a big challenge for a bear — and cross railroad lines, roads, the Trans-Canada Highway. All together, the barriers are formidable.

If we, as a society, want a grizzly population in the North Cascades, we'll have to start by hauling in bears from someplace else. Some people don't like the idea. In 1995, just two years after the recovery plan came out, the state Legislature declared unequivocally, "Grizzly bears shall not be transplanted or introduced into the state." That law, however, has no legal bearing on national park or national forest lands in the North Cascades. If bears are transported here from Canada or Montana, though, the law would keep state agencies from taking part in restoration efforts.

Joe Scott, international programs director for Conservation Northwest, sees a contradiction: Virtually no one objects to letting nature take its course. If grizzlies show up on their own and take up residence in the North Cascades, that's OK. But if they get chauffeured in, it's not so universally accepted. Still, you would have bears there either way.

Before federal agencies would move grizzlies into the North Cascades, Scott says, “They’ve got to find the right bears.” When the restoration planning process started, the national park’s Oelfke says, "we laid out criteria." First, they'd only take bears from a population that seemed healthy enough to part with some. And they would avoid bears that had any history of conflict with human beings. A bear that already had a taste for garbage would not be a good fit. Problem bears get shot, no matter where they wind up. "Any bear that associates human beings with food is a goner," Scott says.

The feds, it’s envisioned, would pick bears from an ecosystem that contained foods also found in the North Cascades. Then, they would pick young bears, between 2 and 5 years old. Older bears would be much more likely to pack up and leave. U.S. Fish and Wildlife Service biologist Wayne Kasworm notes, "Older bears have already invested a portion of their lives in learning their home territories." Why wouldn't they go back? (Everyone involved in the North Cascades planning process knows the story of Winston, a grizzly from British Columbia's Coast Range mountains that was placed experimentally in the North Cascades years ago. He was collared, so scientists monitoring him knew that he hung out for a while near Ross Lake, then headed for home, crossing roads and walking through people's yards without being seen. They don't want more Winstons.)

The scientists would also choose more young females than young males to rebuild the population. Plus, females would be less likely to head back home. The bears might come from the Northern Continental Divide Ecosystem around Glacier National Park or maybe from Wells Gray Provincial Park, well north of Kamloops in eastern British Columbia.

Populations of predators have certainly been introduced into habitat they had historically roamed. The classic example is Yellowstone wolves. Closer to home, you can look at fishers in the Olympics and Cascades. But grizzlies have only been introduced once —  — it is still being done — in the Cabinet Mountains of northwestern Montana, part of the Cabinet-Yaak grizzly bear recovery zone.

The project there appears to be successful, offering a template for restoration in the North Cascades, according to Kasworm, who has led the Montana work from the beginning. "We have taken a population that ran in the single digits and brought it back to about 25," he explains.

It is what he calls “a slow progression." He and his colleagues started in 1990, introducing four bears as a test between that year and 1994. It took another 10 years, until 2004, to find the first DNA evidence that the bears had started reproducing. Now, he says, they're going on the fourth generation.

The recovery plan Zinke backed for the North Cascades has a no-action alternative — just keep on keeping on and if grizzlies show up, that will be nice — and three action alternatives, all of which envision a population of up to 200 grizzly bears a century from now. Scott says that some people seem to have “a perception that the ultimate objectives are meant to be immediate. It'll take a century to get to 200 bears — if all goes well."

"The most [bears] I've heard of being moved in any one year is a handful," he explains. Alternative C — which Conservation Northwest favors — would bring in up to 25 bears over the first 10 years. Not all of those bears would survive. Some would walk away. At best, the population would grow by a couple of bears each year.

The National Park Service and the Fish and Wildlife Service received 127,000 public comments on their draft EIS. Not all were favorable. That was hardly a surprise. Ranchers who already feel beleaguered by wolf packs don't welcome the prospect of more large predators. And, of course, the idea of a charging grizzly bear is beyond scary, even though, in reality, fewer people are killed by grizzlies than perish in avalanches, according to statistics compiled by Backpacker magazine some years ago.. The seven avalanche deaths in Washington this winter exceed the number of people killed by bears of any kind in all of North America during any year since the turn of the century.

Occasionally, (bear) shit does happen. A man I know was hiking some years ago in Glacier National Park, on a trail along which no bear activity had been reported, when he and a friend saw what they thought was a big dog out in a field. The dog ran toward them. It turned out to be a young male grizzly. It mauled the two people. There's no way to sugar-coat that.

Oelfke with the North Cascades National Park doesn't try. He does point out, though, that society has decided to save species, and that entails certain risks. As does spending time in designated wilderness areas.

Then there’s climate change to consider. Would climate change, the elephant in so many rooms, ultimately make the North Cascades a lousy place for grizzly bears, no matter how many are trucked in? Probably not. Officials will do more work on climate change "to pin down what the anticipated changes will be," Oelfke says. But he says that grizzly bears are noted for their “incredible flexibility” about food. He notes “Their range before [European] settlement,” he notes, “was from the far north all the way to Mexico." In the North Cascades, "a variety of habitats exist," Oelfke says, "and thus a variety of food resources." The bears are "such generalists that even with some changes in habitat, they may not become affected" by the higher temperatures, thinner snowpacks and more frequent downpours predicted for Washington, he says.

Their chances will, of course, be better if Zinke's support represents a trend, rather than an anomaly. After Zinke's Sedro-Woolley speech, Conservation Northwest's executive director, Mitch Friedman, told The Seattle Times' Lynda Mapes, “Let me catch my breath. Nixon went to China. Zinke is going to bring the grizzly bear back to the North Cascades.”