A long-awaited airstrip of sorts will arrive in late May, as a new Seattle-Vancouver, B.C. flight takes off. 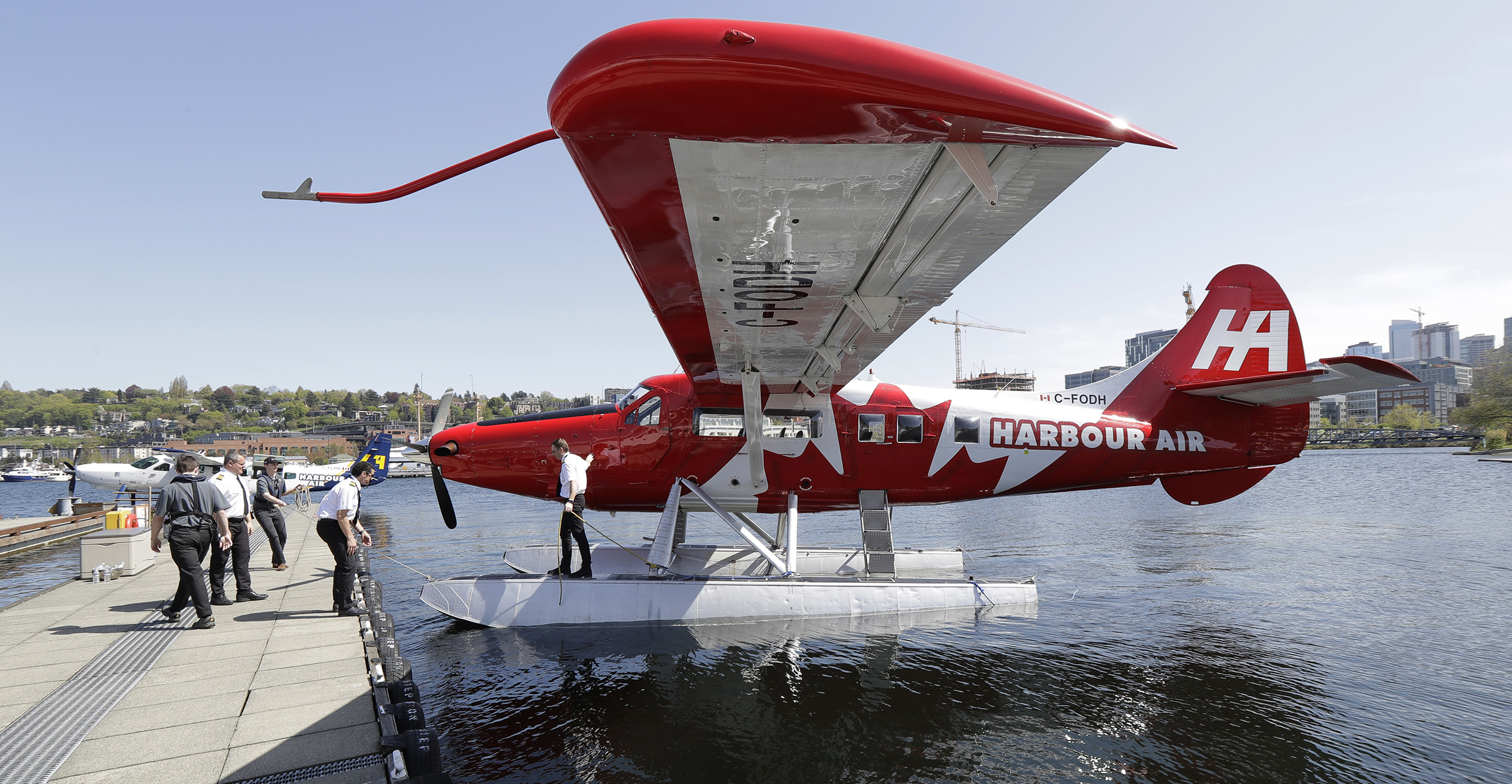 Vaulted by a storied history, seaplanes have flourished on Lake Union for roughly a century. But as regional growth has boosted the aircrafts’ popularity and led to more recreational competition for the limited surface of the lake, a new fixture is coming soon to help manage the conflict of water and air traffic: A runway.

The week before Memorial Day, the city of Seattle will install in Lake Union a straight line of five buoys equipped with flashing warning lights that will alert boaters, kayakers and other watercraft of seaplanes’ impending takeoffs and landings, the Seattle Office of Planning & Community Development (OPCD) told Crosscut.

It’ll be a de facto airstrip in the lake — but not in the traditional sense with a cordoned-off physical lane exclusive only to aircraft. Boaters and other lake users will still be able to access the waters around the buoys; the idea is now they’ll have forewarning not to be in the area at the wrong time. (Aviators who will make use of the warning buoys are referring to it as a “seaplane advisory area,” while a government permit application  formally called it a “takeoff/landing area.”)

Such a water runway has been several years in the making with the goal of improving safety on Lake Union for the increasingly congested mix of sailboats, powerboats, yachts, planes, kayakers and paddle-boarders, among others.

“This warning system is intended to support public safety on the water but does not change any current regulations about right of way for boaters or airplanes,” OPCD spokesman Jason Kelly said in a statement.

Officials at Kenmore Air — which operates the new route in a “joint venture” with Vancouver’s Harbour Air — have been working with city, state and federal officials to get approval for a Lake Union airstrip for the past five years. Public plans for it were revealed about three years ago, as the city sought permit approval from various stakeholders: the U.S. Coast Guard, the U.S. Army Corps of Engineers, the Washington state departments of Natural Resources and Fish & Wildlife and the Muckleshoot Tribe.

“It’ll be a line of buoys that when they flash, there’s a sign that says ‘move away,’ ” Kenmore Air’s chief pilot Chuck Perry told Crosscut this week. “The theory is, that should give us an increased margin of safety for getting in and out of the lake when the lake is really congested.”

The buoys will be present only in the summer season, roughly between Memorial Day and Labor Day. “That’s the only time we need it,” Perry said.

But some other business owners that rely on Lake Union aren’t enthused by the new water runway, although they acknowledge it has the potential to make travel safer on the water.

“It’s going to take up a lot of space on the lake,” said John Meyer, an owner of the Northwest Outdoor Center off Westlake Avenue, which rents kayaks and stand-up paddle boards on Lake Union and offers classes for beginners. “It’ll be more difficult for everybody to get around — whether sailboats, power boats, kayakers, paddleboarders. … They’re turning Lake Union into an airport, and it’s not one.”

Seaplanes have a decades-long history in Lake Union beginning with the famous Boeing name. One hundred and two years ago this June, Bill Boeing took to the skies in his first flight using a seaplane that taxied into takeoff from Seattle’s Lake Union.

100 years of aerospace history started with our first flight on June 15th, 1916, with our founder Bill Boeing in the pilot seat of the first Boeing B & W airplane, “Bluebill”. After a short taxi along the smooth surface of Lake Union, Boeing gunned the engine and lifted into the air for a brief quarter-mile flight. One month later, Bill Boeing incorporated Pacific Aero Products Co., which would soon become The Boeing Airplane Co. Boeing was convinced that constant innovation and technological advancements would be key to making The Boeing Company a success; 100 years later that belief remains at the core of The Boeing Company. Follow #Boeing100 and journey with us as we share 100 Boeing milestones in a countdown to Founders Day on July 15, 2016. #BoeingLovers, #instagramaviation and #avgeeks: We want to see your Boeing and #aerospace memories. Join the celebration with #Boeing100 for a chance to be featured.

Kenmore Air has been flying seaplanes in and out of Lake Union — and Lake Washington in nearby Kenmore — since three friends founded the aviation company in 1946. Perry says it’s now the largest seaplane airline in the U.S., currently with 20 floatplanes and three land planes that fly to 45 scheduled destinations in the region. (Seattle Seaplanes, also based in Lake Union, similarly offers charter flights and scenic tours from the lake.)

As the Seattle region’s population has grown, use of the lake for commercial and recreational purpose has only amplified — including by the seaplanes. Perry thinks there’s a direct correlation.

“We just have more people in the neighborhood that want to go,” he said. “We will continue to have more population show up and there’s always going to be a percentage of the newcomers who say, ‘I want to go try that; I’ve never done that.’ ”

But that extra population also means more traffic on the lake from all parties, and hence the need for more safety measures, like the buoy-marked airstrip. “It’s gotten a lot busier; it’s getting way more crowded out there with boats,” the Outdoor Center’s Meyer said.

Meyer was skeptical the buoys will help with safety, though. “How much do people obey traffic laws?” he noted. “We’ll just have to wait and see; it’s not really something that’s been tried here.”

The first-of-its-kind seaplane route between Seattle and Vancouver, B.C., reflects the growing demands on Lake Union, too. Both cities have booming populations and rising workforces — thanks in part to serving as hubs for burgeoning tech companies and other modern industry —  while boasting downtown waterways that provide convenient access to major corporate offices.

The new flight service was celebrated by dignitaries from the U.S. and Canada, as well as Microsoft executives, during a kick-off party Wednesday. “We at Microsoft have been supporters, advocates and maybe even agitators for this route,” said the company’s president Brad Smith. “We’ve been saying ‘gee, it’s not only a flight whose time has come, but maybe it’s even a little overdue.’ ”

At the party, other figures also praised the collaborative addition to the region, such as Washington state Gov. Jay Inslee and Navdeep Bains, Canada’s minister of innovation, science and economic development who attended as a surrogate for Prime Minister Justin Trudeau.

“The key issue was getting the customs clearance done on the Canadian side,” explained Greg McDougall, CEO of Harbour Air. “There was no customs clearance in Vancouver harbor, and so there was a reluctance for the CBSA [Canadian Border Services Agency] to be able to expand their customs network, as they had their hands full with cruise ships and everything else. So we literally did have to go to the top of the rung, which was Trudeau’s office and he was very helpful in getting this happen.”

Although tech workers are the initial customer target, the flights — costing $285 (U.S.) one-way — are intended to entice a broader audience, too, including other “professionals, sports fans [and] tourists,” said Todd Banks, president of Kenmore Air.

Flights will leave in both the morning and in the evening Monday through Friday from both Vancouver and Seattle, with the potential for weekend flights if there’s demand. In Kenmore Air’s 72-year history, “this is kind of a big deal in that we’re stretching and adding a route,” said Perry, the chief pilot. He said if the route — technically a one-year pilot project — proves to be viable, it could be expanded in future years.

“It’s an attempt to tie the two cities together,” Perry said, “and we’ll see what happens.”