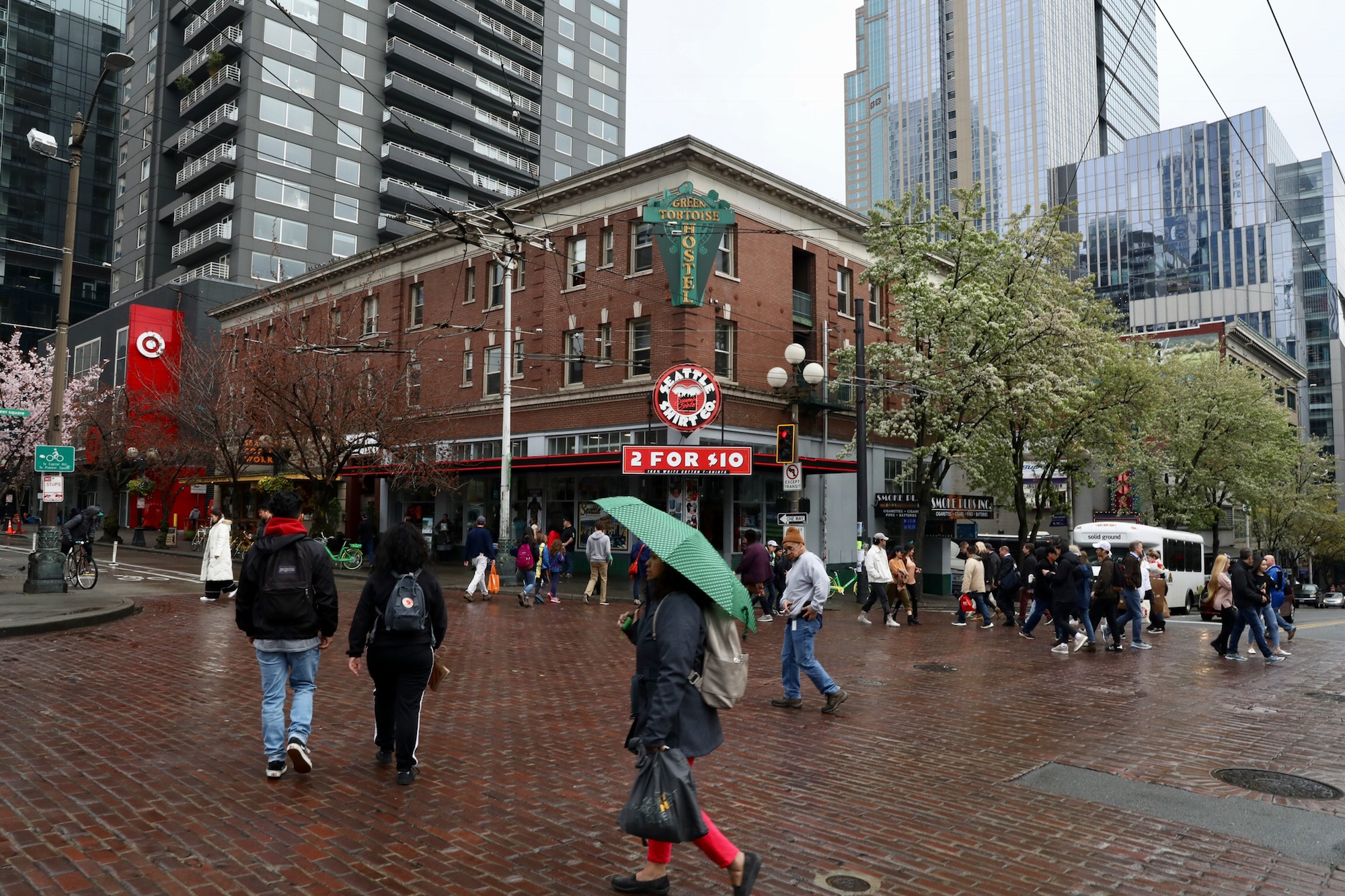 The red brick building at the entrance to Pike Place Market is slated for redevelopment. It houses the Green Tortoise Hostel and retail. (Photo by Matt M. McKnight/Crosscut)

The proposed redevelopment of the site of the Hahn Building at First & Pike is grinding forward through Seattle process. A modern 14-story tower is slated to take the place of the old brick building (currently housing the backpacker-beloved Green Tortoise Hostel) that is widely regarded as a key part of the “entrance” to the Pike Place Market.

The four corners of First & Pike all have structures contemporary with the Market’s origin era. You can stand there today and get some of the feel for what the Market was like back in the day.

The new building will certainly feel like an intrusion on this unique historic survivor. Opponents are continuing to plead for a smaller, redesigned project.

The Market community had fended off changes here before. Back in the early 1980s a Burger King opened on the site following the closure of the infamous Donut Shop, which was a hangout for street kids and thieves back in the neighborhood’s “Streetwise” era. There were vociferous objections to the Burger King— that it was tacky and inappropriate, that it would become a hangout for pimps and drug dealers. Unwelcome and unwanted, it shut down after a few years.

Those, oddly, seem like more innocent times. The cause was keeping out a Burger King! That seems rather quaint now. If you walk Pike Street between Second and Third avenues today, there’s a Target, a Hard Rock Café and a Subway.

Now, at a time when we are worrying about affordability, gentrification and whether tech is becoming all powerful, we are going to lose a building that houses a hostel, often serving the younger people who have kept the corporate world at arm’s length.

The survival of the Market itself was designed to preserve a downtown urban ecosystem that protected low-income downtown residents and created a tourist attraction. It has done so. Upscale housing arrived in the '70s and '80s as part of the first downtown residential renaissance. Protectors of the Market took pride in “saving it,” but also in it being a catalyst for further downtown development. It was an urban oasis but also a tool for revitalization.

So, the encroachment of high-rises and cranes at the doorstep of the Market should be of no surprise.

To be a preservationist today is to be considered a NIMBY, a retrograde holding the city back from New York Alki, another New York. I think many of us come to our positions by instinct and temperament. Many people love change and embrace it. Others are skeptical.

I am a person who is attached to things, to places, to continuity. Place embodies experience and memory, attachment and identity.

There are Buddhists in my family, but I have not learned the art of detachment. That brings woes to someone of my inclinations living in Seattle today.

I am experiencing this at the most personal level, too, as my family prepares to ready an old family home for possible sale. The home is full of stuff, some passed down over hundreds of years, valuable mostly to those of us who treasured its connections with the ancestors. Book collections, family-made art, heirloom furniture. Most of it must go.

This isn’t a Craigslist ad; this is an expression of grief. Crosscut recently ran a wonderful story about a Central District family trying to hang on to its place and history. I empathized. Preservationists like to talk about the “embodied energy” in old structures, arguing that repurposing an old structure is often greener than building a new one. But there is embodied energy that goes beyond electricity and insulation and what might or might not go into landfill or be recycled. There’s the embodied energy of history and of place, of having touchstones and landmarks for our personal and civic lives.

In Seattle today, though, that embodied energy is far outweighed by the energy of the new, of change, whether it’s reflected in cranes or Amazon’s bubbles. And I’m not going to say all of it is negative. I’ve always been for a balance, but Seattle’s booms and busts have usually been in the driver's seat, not a commitment to steady moderation.

So, I’ve become a bit of a fatalist about Seattle. I’m having to let go of important family history while at the same time realizing that I have to let go of some attachments to the cityscape. So many people come here to be free of the baggage of the past — my immigrant grandparents certainly did. We are a place of reinvention. I am weary often of my own attachments. Seattle is a wonderful city, but less and less does it feel like “my” city.

The planned changes at First Avenue and Pike Street are nothing I could support. The new high-rise will change the historic character of the intersection for people entering the Market, and that is a loss.

Yet the crowds of tourists and the thousands of newcomers to the city generally won’t know the difference, and the Market’s own recent changes to expand and connect with the waterfront have improved the experience. Likely, the Hahn property redevelopment won’t change the neighborhood all at once. Street life there continues as it has for over a century. There are certain patterns that appear indelible, for better or worse.

In personal life and civic life, however, I find the thing I need to practice is sometimes letting go.