How life changed at KOMO when Sinclair came to Seattle

“Anybody but Sinclair”: Issues with the controlling owners are nothing new for KOMO journalists. 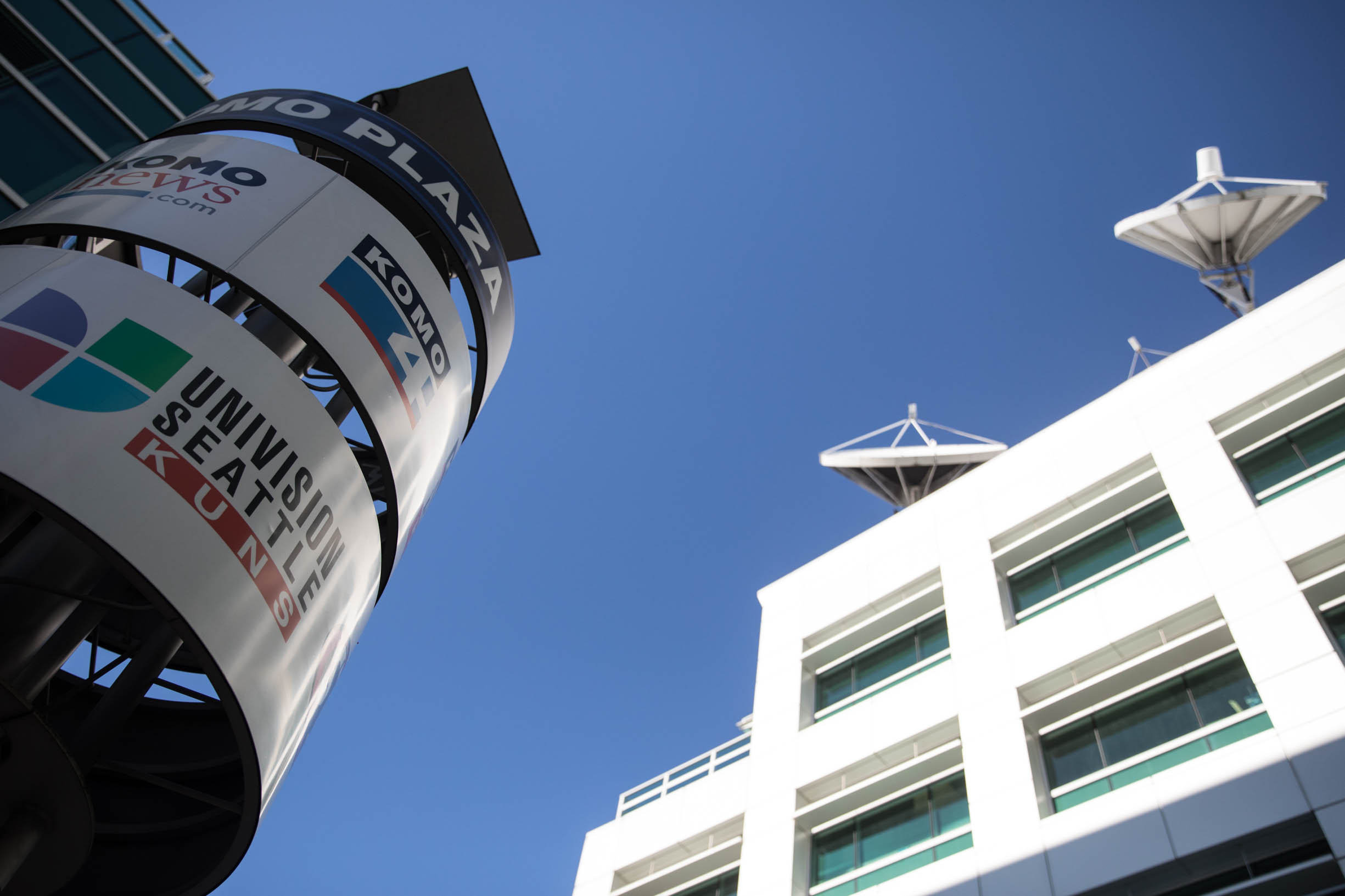 An exterior shot of KOMO News in Seattle, which is owned by Sinclair Broadcasting. (Photo by Matt M. McKnight/Crosscut)

Rumors of a KOMO buyer happened to coincide with the annual meeting of the National Association of Broadcasters, in 2013. Everyone knew the station was for sale, but there had been some hope it would go unsold, as it had once before. In fact, managers were using the line to calm a nervous staff. This could be nothing, they seemed to say.

Things were not perfect under Fisher Communications' management, to be sure. Resources were tight, made even more lean by management hoping to appeal to potential suitors. But what issues existed were largely viewed as the same realities facing all media and there was some comfort in Fisher’s local roots.

But during the conference in Las Vegas, chatter spread that there was a bidding war going on for the station. Who was competing was only speculation, but one manager at the time told a colleague, “Anybody but Sinclair.”

Sinclair was not the household name back then as it has become in recent months. But for those in TV, it was already well known. “When you heard the word Sinclair, if you’d been in the business long enough, you knew it couldn’t be good,” said one longtime KOMO staff member. They were known for being conservative, a reputation they’d earned through pushing the “swift-boat” story, which questioned the war-record of 2004 Democratic Presidential nominee John Kerry.

But it went beyond political beliefs. “Stuff started to circulate, stories about Sinclair and how they had handled things,” said another longtime senior staff member. “That they were a good ol’ boys network and they had very little diversity.”

More than that, they were known as formulaic, unconcerned with the nuances of local markets. Sinclair, more than any other media conglomerate, was seen as a departure from the local connection KOMO was so proud of.

Then the purchase happened in Spring of 2013, days after the conference. And when it did, some on the staff began to panic. “Everyone was kind of dismayed when it was Sinclair,” said the former senior staff member.

It wasn't until Donald Trump that viewers had ever wondered who Sinclair was. But for the newly-pilloried staff of KOMO — met in recent months and days by social media demands that they quit — the complicated relationship is several years old. Staff have chafed at the new ownership while also understanding the weak job prospects of a dwindling media landscape.

Shortly after the purchase was approved, Sinclair executive chairman David Smith got on a plane from the headquarters in Maryland, along with a team of about 13 of the company’s most senior members. The entire KOMO staff filed into a spare studio to see their new bosses sitting in a row, confirming some fears: They were all white men, save for the HR director, who was a white woman. “You’re talking to a diverse staff,” said one former employee. This does not bode well, this person remembered thinking.

Current and former KOMO employees, who requested anonymity for fear of retribution, speak with pride about their station, especially in the pre-Sinclair days. “There was a lot of pride in the work and there were a lot of awards in the work,” said the senior staffer. “Our work was an excellent product.”

At the time, it would be Sinclair’s largest purchase to date, several calling it a new “jewel” in the conglomerate’s purse. Staff wanted their new corporate owners to acknowledge that.

Many employees left feeling, What have we done?

That first meeting was so bad, in fact, Smith returned a short time later to offer, not an apology so much as an explanation. “You keep doing your thing and we’ll leave you alone,” he said.

But the “must-runs” that have become so notorious in the last year — pre-produced, heavily partisan content Sinclair stations are required to run — were already well-known within the broadcast world. One employee had colleagues at other Sinclair stations who, before the KOMO sale, had warned about these segments. Most famously, there was the swift-boat story, but there were editorials from a Sinclair executive, Mark Hyman, who liked calling college students “snowflakes.”

As feared, after the 2013 purchase, corporate soon started handing down the segments to KOMO. Holly Gauntt, the news director at the time, was praised by several employees for resisting their airing from the start, running them in the middle of the night, away from the eyes of viewers. But there was only so much she could do.

There were also the layoffs in October 2013, which corporate made Gauntt carry out, often with tears in her eyes, say some staff. Media reports at the time list around 20 people let go, but according to one employee, it was closer to 40 when you include corporate staff with Fisher.

Among the layoffs, the KOMO librarian, a woman known for her ability to dig up both archival footage and documents to push stories forward. No one replaced her.

“Morale was really down in the dumps,” said the senior staff member, who’d been with the station for more than 20 years. “The worst I had seen.”

Coinciding with the layoffs, Sinclair began cost-cutting. They added more newscasts, but not reporters. It was a cheap way to eat up air-time. They also phased in more automation, a move other outlets had already embraced fully, but which nonetheless frustrated the station’s veterans.

Longtime staff members perceived they were being pushed out to make room for cheaper, less experienced replacements. In early 2017, the station’s investigative unit was dissolved. Reporter Tracy Vedder sued in September 2017 for age discrimination.

“When they cut jobs and automate production, it frees up temporary cash so they can then over-leverage their content farms,” said one former reporter. “What works in Alabama doesn’t work here. For years they’ve ignored that reality, and the ratings and the bottom line have reflected that.”

Meanwhile, Sinclair’s relationship with the broadcasters and photographers unions were strained, with contract negotiations dragging out for years. Sinclair wanted KOMO staff to fall in line with its broader pay and vacation policies, which were far less flexible and generous than what employees had grown used to under Fisher. In a contentious vote last year, the photographers union eventually agreed to a new contract for fear of losing their jobs permanently. The broadcasters continue to negotiate.

When you heard the word Sinclair, if you’d been in the business long enough, you knew it couldn’t be good.”
— A longtime KOMO staff member

The station began to see people leaving on their own after the sale. One employee said KOMO staff started to call its competitor station, Q13, “KOMO North” because so many of their colleagues started working there after leaving. Several former employees said they left because they no longer believed in what the station was producing. Others grew fed up with the station after Sinclair wanted to run a piece in response to a Seattle Times editorial trashing Sinclair’s purchase. One left shortly after the KOMO news helicopter crashed in 2014, killing two, a stark reminder of this person’s own mortality.

But for all the turmoil, several who stayed say they never felt pressured into changing their own reporting. The piece in response to the Times rankled some and, on some occasions, there felt like an obsession with government spending. But others say their day-to-day wasn’t influenced.

It wasn’t until after Donald Trump was elected that what had been long-standing Sinclair practices drew public attention. It became clear leading up to the election that the company favored Trump, donating to Republican causes and apparently striking a deal with Jared Kushner for favorable coverage. So while the must-runs and conservative tilt were not new, the sensitivity to the company’s worldview and growing presence in local media was.

In March 2017, word spread among staff that the latest must-run would be about “fake news” from Sinclair’s vice president of news, Scott Livingston. It was seen as parroting the new president and disguised as a news segment. Like Gauntt before them, staff tried to bury the piece during the 3:30 p.m. broadcast and several began speaking to other media outlets.

As coverage of Sinclair built momentum, people started noticing and drawing attention to the other must-runs: Boris Epshteyn, the former Trump official; the Terrorism Alert Desk; a recent series on immigration in Sweden that many found to be racist. Comedian John Oliver ran a scathing segment on the company.

But the real fire was lit after anchors were made to read the same script Livingston had read himself in March 2017. Following first a CNN report on the mandate and then a viral video, showing hundreds of anchors speaking the same words, suddenly the reporters were the villains.

How America's largest local TV owner turned its news anchors into soldiers in Trump's war on the media: https://t.co/iLVtKRQycL pic.twitter.com/dMdSGellH3

“Everybody’s twitter got hammered,” said one staff member, with employees repeatedly being compared to Nazi soldiers doing the bidding of their bosses. One staff member was recognized and grilled in a coffee shop. At least two staff members have already noticed fallout in their reporting, with sources bringing up the Sinclair connection. Others reportedly share the same worry that the connection will impact their day-to-day work.

In the coming months, as some staff contracts expire, several former staff members predicted more people would begin leaving the station. “Everybody to a T wants out,” said one. “Many are contemplating a career change.”

Others have wondered if there will be some resistance to Sinclair. Anchor Mary Nam tweeted at President Trump, “When media giants gobble up local news stations, there are repercussions.” According to one person at KOMO, she joked with colleagues: “Well, it was nice working with you all.”

Actually, this isn't funny at all.
None of it.
When media giants gobble up local news stations, there are repercussions. And since you brought it up first this morning, will your admin green light the Tribune buyout? https://t.co/9Udm54LLOx

”We’re waiting to see if she’s going to get her hand slapped,” said this person.

Meanwhile, a $3.9 billion sale of Tribune Media, which owns Q13, to Sinclair is still pending. But Sinclair has said it would sell Q13 if the sale is approved.

Former staff are sympathetic to those who still work at KOMO, largely rejecting the quit or be cast as a stooge binary. But they also wonder how long people can last. “The point is that news and journalism is unbiased and fair and objective, and I think that’s what the individuals at KOMO still strive to do,” said the former senior staff member. “But it’s muddied waters now. And when you get in the water, you’re in the mud.”