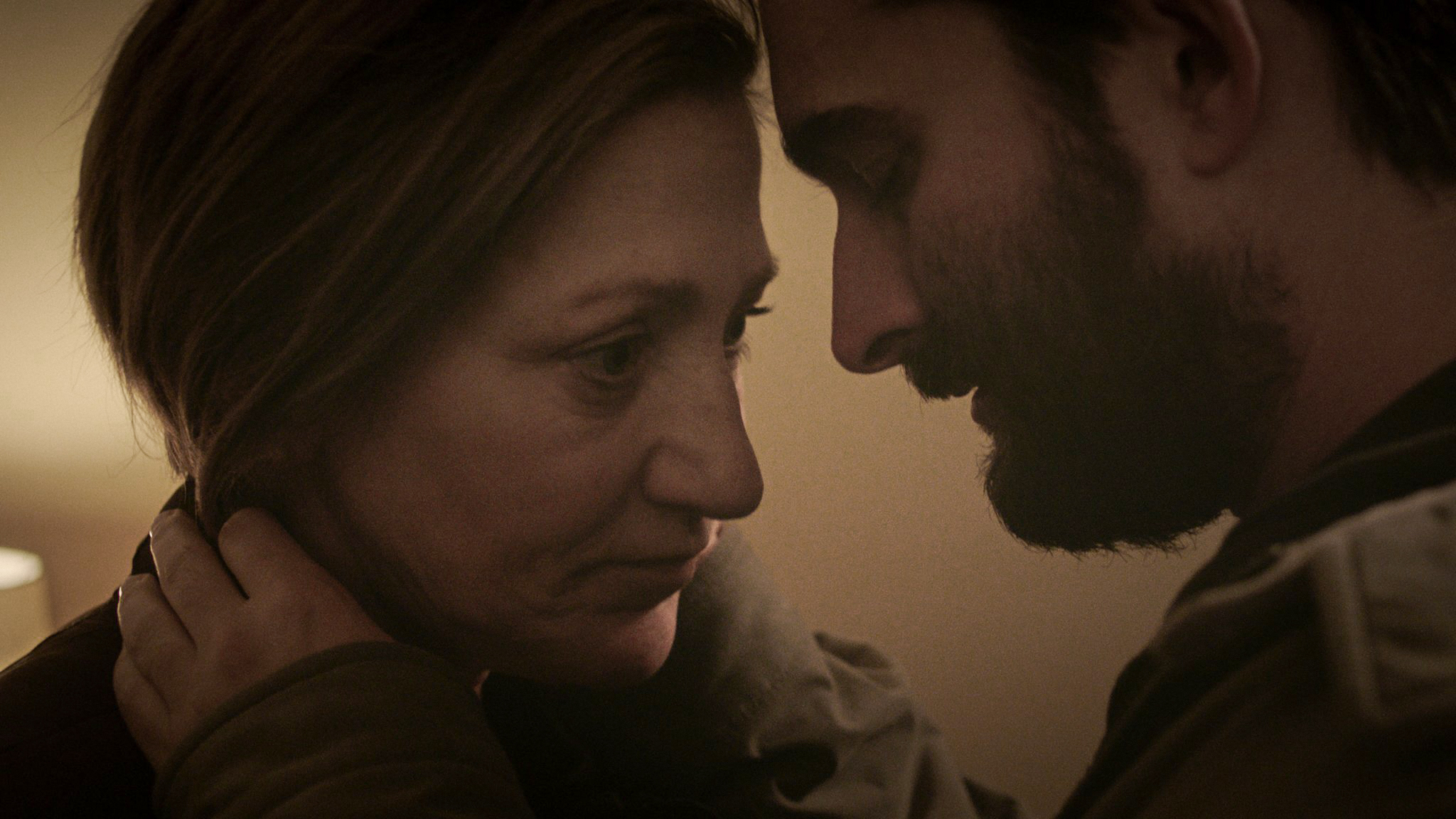 A scene from "Outside In" with Carol (Edie Falco) and Chris (Jay Duplass). (Photo by Nathan M. Miller)

Lynn Shelton’s latest movie starts on such an agonizingly awkward note that you wonder, at first, if it’s the filmmaking that’s awkward rather than the situation being depicted.

Thirty-eight-year-old Chris Connelly (Jay Duplass) has just been released from prison after serving 20 years for a crime in which he was more of a bystander than a perpetrator. He’s greeted at his brother’s house with a surprise party thrown by friends and neighbors, half of whom he doesn’t recognize. The tension of being tossed back in this world promptly makes him sick.

Not a good start – and for most of the film, it doesn’t get better. “Outside In” (the title is a perfect description of how Chris views his bewildering predicament) is something different for Shelton: a finely calibrated small-town drama far removed from the off-kilter comedy of her past films (“Hump Day,” “My Sister’s Sister,” “Laggies”).

While it has occasional quiet humor, it keeps a steady focus on the question it raises: What would it be like to be yanked out of your world in your late teens and then thrust back into it with little preparation two decades later?

Duplass’s Chris is vulnerable, angry, puppy-doggish and entirely at sea. As he tells his former high-school English teacher Carol Beasley (Edie Falco), “This is, like, so much harder than I thought.”

Carol has been Chris’s lifeline during all his years in prison, and he has served as her confidant too. His release came about thanks only to her intense efforts on his behalf. It’s not surprising that he wants to stay close to her. But she neglected her family during her crusade to free him, and now that he has been released it’s time for her to put things at home back in order.

“Outside In” is a quiet film. It observes Chris’s homecoming in matter-of-fact fashion. There’s his old music collection – all on cassette tape. There’s his first cell phone – a total mystery to him. While his brother and his brother’s friends are living as carelessly as they always have, Chris is nervously aware that he’s on probation and has to conduct himself carefully.

In a phone interview last month, Shelton spoke about what triggered her change of tone in “Outside In.”

“I definitely call it a full-on drama,” she says. “In the other films I’ve made, strangely enough, I didn’t necessarily set out to make comedies. Or I knew there’d be comedic elements, but I also felt like there was a lot of dramatic material in them as well.”

Shelton says one starting point for her new film was her eagerness to work with her friend Jay Duplass after seeing his performance on “Transparent.” (She had worked with his brother Mark Duplass in “Humpday” and “My Sister’s Sister.”) It wasn’t the Rip Van Winkle aspects of Chris’s experience, however, that triggered the plot of “Outside In.” It was the relationship between Chris and Carol.

“A very specific kind of soul connection between two people who genuinely save each other,” she says, “and who really do fall deeply into a kind of love. But they’re not allowed to ever touch. It happens over a very long period of time. It’s kind of an Heloise and Abelard situation, where it’s all based in thought and word and letters.”

When the enforced physical separation of Chris’s imprisonment is removed from the equation, things start to go awry.

“Even if she was completely free,” Shelton says of Carol, “it doesn’t look like a match that would make any sense at all to anybody that they know.”

Shelton was also drawn to what she calls the “Boy, Interrupted” aspects of Chris’s prison experience: “It’s stunted his development, but it’s accelerated his aging.”

Duplass was her co-writer as well as her lead actor. He researched his character, Chris, by connecting with ex-cons who’d gone through a similar experience. The way he conveys both an innocence and a damage in Chris is extraordinary. It’s especially evident, Shelton thinks, in the way he dresses: “The way he sort of swims in his clothes . . . hiding in these tent-like clothes and seems sort of shrunken in them.”

The casting of Edie Falco (“Nurse Jackie,” “The Sopranos”) as Carol was a coup for Shelton. She came Shelton’s way because she had worked with Duplass in Gillian Robespierre’s movie, “Landline.”

“I think they only spent a couple of days on-set together,” Shelton says, “but just really connected well and strongly. And the script really appealed to her. She’s talked about it in interviews . . . how you just do not see a romantic leading part for a woman over forty – certainly not one that’s just like an everywoman.”

Carol isn’t glamorous. She’s a small-town English teacher trapped in a moribund marriage, with a rebellious teenage daughter (Kaitlyn Dever) on her hands. Falco lets you see every uncertainty in Carol’s eyes as the situation with Chris grows more complicated and she juggles possibilities, responsibilities, personal needs and societal expectations.

“Showing that there’s a rich emotional life for a woman of that age,” Shelton says, “is just so rare to see at the center of a film.”

Along with its powerful performances, “Outside In” has a powerful sense of place. The film marks the first time that Nathan A. Miller, a longtime camera operator for Shelton, has served as her director of photography. In his hands, the Cascade foothills landscape surrounding Granite Falls is chilly, damp and lush, and the landmarks of the town itself – police station, gas station, laundromat, food bank, old clapboard City Hall – are as lovingly and forlornly rendered as in an Edward Hopper painting. Miller will shoot Shelton’s next film as well.

“I really pride myself on being geographically specific,” Shelton says. “We embedded ourselves up there.” Their “base camp,” as she calls it, was Granite Falls’ American Legion Hall.

“Every location was within walking distance,” she says. “You’d see our little crew, with our equipment, in our raincoats. . . . The whole town knew who we were by the end.”

Is there anything she can reveal about her upcoming project?

“Not really,” she says. “It’s sort of in that secret stage. I’ll tell you this much: It’s going to be a comedy. I’m definitely going in the other direction, because I really need that.”

If you go: “Outside In” opens at the SIFF Uptown on April 6 (www.siff.net)