‘Merchant of Venice’: A bigoted play? Or a play about bigots?

With anti-Semitism on the rise, Seattle Shakespeare Company leans into a controversial classic. 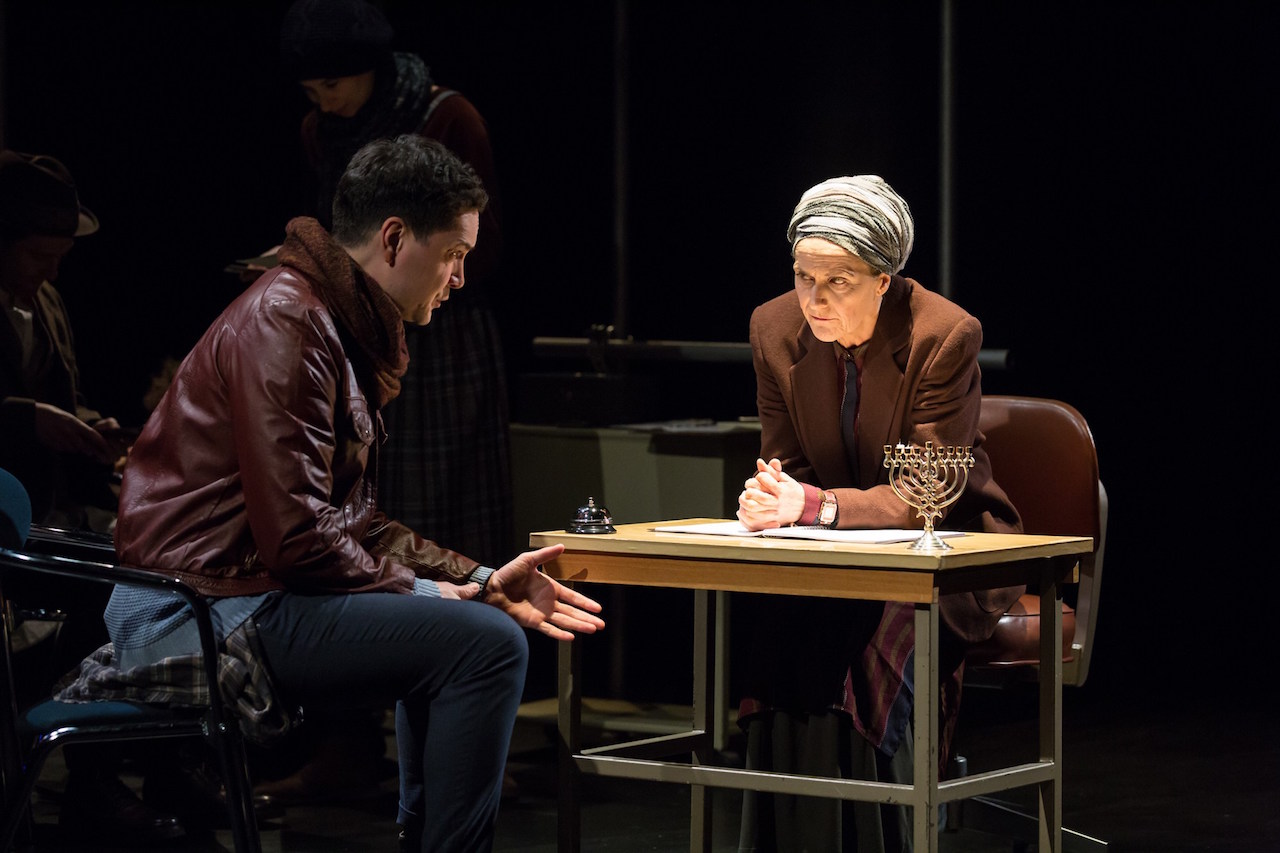 Prejudice against Jews was certainly rampant in William Shakespeare’s Elizabethan era. And it's on the upswing today.

A recent international survey by the Anti-Defamation League suggests that about a quarter of the world’s population harbors anti-Jewish biases. ADL also documented nearly 2,000 incidents of anti-Semitism incidents in the U.S. during 2017 — up 57 percent from 2016. These included bomb threats, cemetery desecrations, White supremacists marching and shouting anti-Jewish slogans in Charlottesville and Jewish children harassed by their peers at school.

So, is now a good or bad time to perform “The Merchant of Venice”? And is it an anti-Semitic play that keeps being staged because of its Shakespeare pedigree? Or is it a play about anti-Semitism and intolerance, which could lead to more awareness of it?

The answers are debatable, raked over by scholars for centuries. And with any new production, the question bubbles up again, as with Seattle Shakespeare Company’s current version of “Merchant of Venice” which runs through April 15.

There are a number of reasons why “Merchant of Venice” remains problematic and disturbing, several centuries after William Shakespeare penned it. Structurally it seems like two clashing plays. One is a classic romantic comedy with several couples neatly, happily married by the end. The chief bride is Portia (glowingly played by Jen Taylor), a noblewoman of grace and ingenuity who reluctantly plays a game her father devised to determine which of three hopeful suitors “wins” her. Later, like other classic comedy heroines, she slips into male drag. She convincingly masquerades as a lawyer — proving herself to be (arguably) the Bard’s most autonomous and brainiest female character.

But what lurks alongside the play’s sunnier side is far darker: the tale of rough commerce and defeat of a despised moneylender, Shylock. Shylock is an avaricious Jew among upstanding Christian businessmen who hate him for his religion, and his usury (charging interest on loans). When one of his most bigoted clients, Antonio (Darragh Kennan), can’t repay a large loan, Shylock is as hard-hearted as Tony Soprano. His demand? Literally, a pound of flesh sliced off the chest of Antonio, who foolishly agreed to this gruesome penalty in the event of default — but never imagined it would come to that.

Desdemona Chiang directs the solidly acted “Merchant” at Center Stage Theatre thoughtfully and crisply, in modern dress and with abstractly urban backdrop. Though this is not an agenda-driven production, she makes some calculated, consequential choices. There are tattered street people in this Venice, a clear sign of economic inequality.

And Amy Thone, a Shakespeare veteran, excels in the traditionally male role of Shylock. What Thone brings to the part, much more than her gender, is a soft-voiced but steely resolve, a sense of dignity under siege and a keen understanding of Shylock’s outsider position. And, admirably, there is nothing caricatured about her portrayal.

Shylock deals with gentiles who may rely on his money, but who have heaped abuse and spit on him, calling him “misbeliever” and “cutthroat dog.” (I’m using male pronouns here, because the play does.) His jewels and cash are his comfort, his security. And he seems to prize them as much or more than his own daughter Jessica (Katya Landau) who rebels against him in the most hurtful way: she swipes Shylock’s cache of precious gems and runs away to marry a Christian, Lorenzo (Trick Danneker).

The production’s director Chiang doesn’t pursue a potential hint of homosexuality in the play exploited by other contemporary “Merchant” stagings. Here the ardor and financial generosity of melancholy Antonio, a confirmed bachelor, toward his friend and Portia’s beloved, Bassanio (Richard Nguyen Sloniker), suggests brotherly love but not romantic infatuation.

Taken at face value, this eliminates another possible intersection of love, hate and money. And it shines the spotlight even more glaringly on Shylock, who insists on exacting a barbaric price from Antonio. So, are we to despise Shylock? Or do we understand, if not condone, a hunger for vengeance triggered by years of Antonio’s anti-Semitic abuse?

“He hath disgraced me and hindered me half a million,” Shylock accuses, “laughed at my losses, mocked at my gains, scorned my nation, thwarted my bargains, cooled my friends, heated mine enemies — and what’s his reason? I am a Jew.”

In 16th Century England — Shakespeare’s era — relating to Shylock would be a leap of imagination and empathy for audiences. Jews had been “more or less expelled” from the country since 1290, according to classics scholar Harold Bloom, and there were likely only a few hundred of them there, mostly as Christian converts. It’s unclear whether Shakespeare ever met or knew a Jewish person. (Jews could not openly practice their religion and were not welcomed back into Britain until decades later, during the Cromwellian Protectorate of the mid-1650s.)

What, then, shaped Shakespeare’s creation of Shylock? Certainly, his rival Christopher Marlowe’s hit play “The Jew of Malta,” which debuted in 1592, several years before “Merchant” was presented. In the bloody revenge saga, Marlowe’s title character is also a Jewish moneylender and unquestionably an outright, outsized villain. He also has lost much to religious bigotry, but goes on a gruesome murder spree during which he poisons, among others, his own Christian convert daughter and her entire nunnery!

What would Elizabethan theatergoers make of this? With no English Jewish community to speak of, images of Jews were largely based on negative depictions like Marlowe’s, and the unpleasant tasks European Jews performed as moneylenders and tax collectors. (They were often barred from many other professions, and owning land). A more incredible source of hatred against them: ancient grudges, and lingering myths that Jews were “Christ killers” who murdered Christian children to use their blood in exotic rituals.

Shakespeare doesn’t perpetuate these falsehoods in “Merchant.” The character isn’t loveable, nor a monster. Moreover, Shakespeare gives Shylock one of the most stirring, poetic defenses of human equality in English literature:

John Gross, in his detailed book “Shylock,” argues that as an enduring image of a greedy, vindictive Jew, the role “may not have added anything to existing stereotypes, but as the most famous Jewish character in literature he helped to spread them and to keep them vigorously alive.”

They were certainly alive enough in the 1930s for Adolf Hitler to use the play to whip up anti-Semitism. At least 50 separate German productions were staged in Germany between 1933 (the year Hitler’s Nazi Party came to power) and 1939, with Shylock generally portrayed as a repulsive villain, a symbol of the Jewish population Hitler was trying to rid Europe of.

Today Shylock is approached with far more balance and nuance by thoughtful directors like Chiang. The additional challenge, however, is what to make of those Venetians who torment him — are they good folk despite their noxious bigotry?  Do we approve of how Shylock is forced to convert to Christianity and stripped of most of his wealth?

The Seattle Shakespeare rendering does not find a way to truly integrate the two sides of “Merchant.” It also could probe more into the socioeconomics of capitalist Venice and its wheeler-dealer bros, and their view of anyone different (not just Jews) as “alien.”

But that "outsider" notion is carried over in a final telling moment.  As her friends and new Christian husband celebrate their unions and Shylock’s comeuppance, the moneylender’s estranged daughter Jessica stands apart.  Yes, she has willingly relinquished her religion and abandoned her parent. But is she still a foreigner amid her new gentile family?

Though “Merchant” can and has been used as an instrument of hate, this production doesn’t oversimplify the ironies and ambivalence, the incongruities of the text. Our sympathies shift between characters, but maybe the effect should be more unsettling and disturbing here, given the upswing of religious, cultural and racial intolerance confronting us now.

The question remains: is “Merchant of Venice” a vessel for bigotry or a protest against it? I side with James Shapiro in his illuminating book “Shakespeare and the Jews.” He contends the play "is not a diary or a polygraph test; since no one knows what Shakespeare personally thought about [Jews].” Readers (and theater artists, and audiences), he concludes, “will continue to make up their own minds about this question."

If you go: Seattle Shakespeare Company's “The Merchant of Venice,” at Center House Theatre, through April 15.